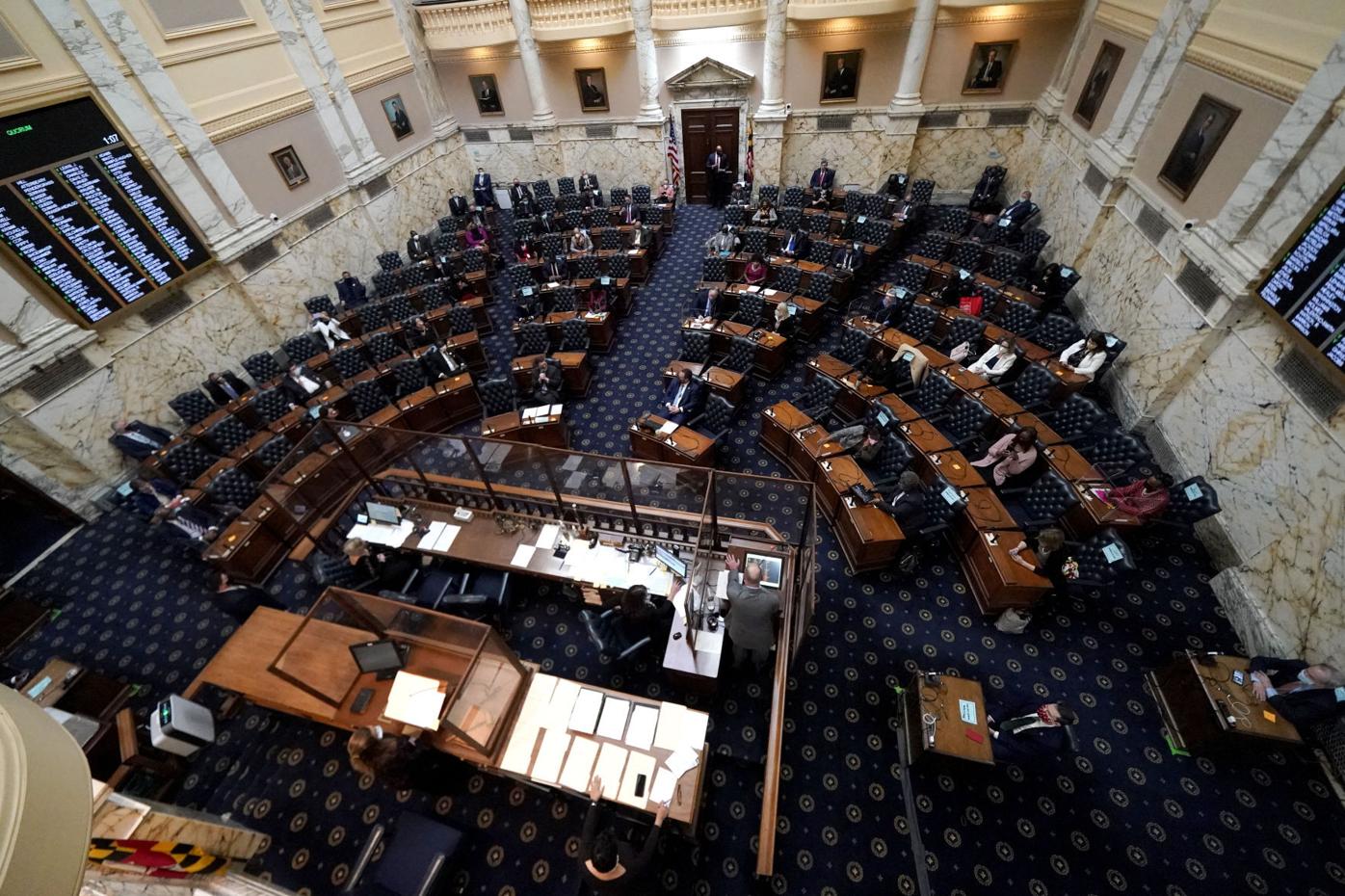 Members of the Maryland House of Representatives are seen socially distanced to prevent the spread of COVID-19 during the first day of the state’s 2021 legislative session, Wednesday, Jan. 13, 2021, in Annapolis, Md. 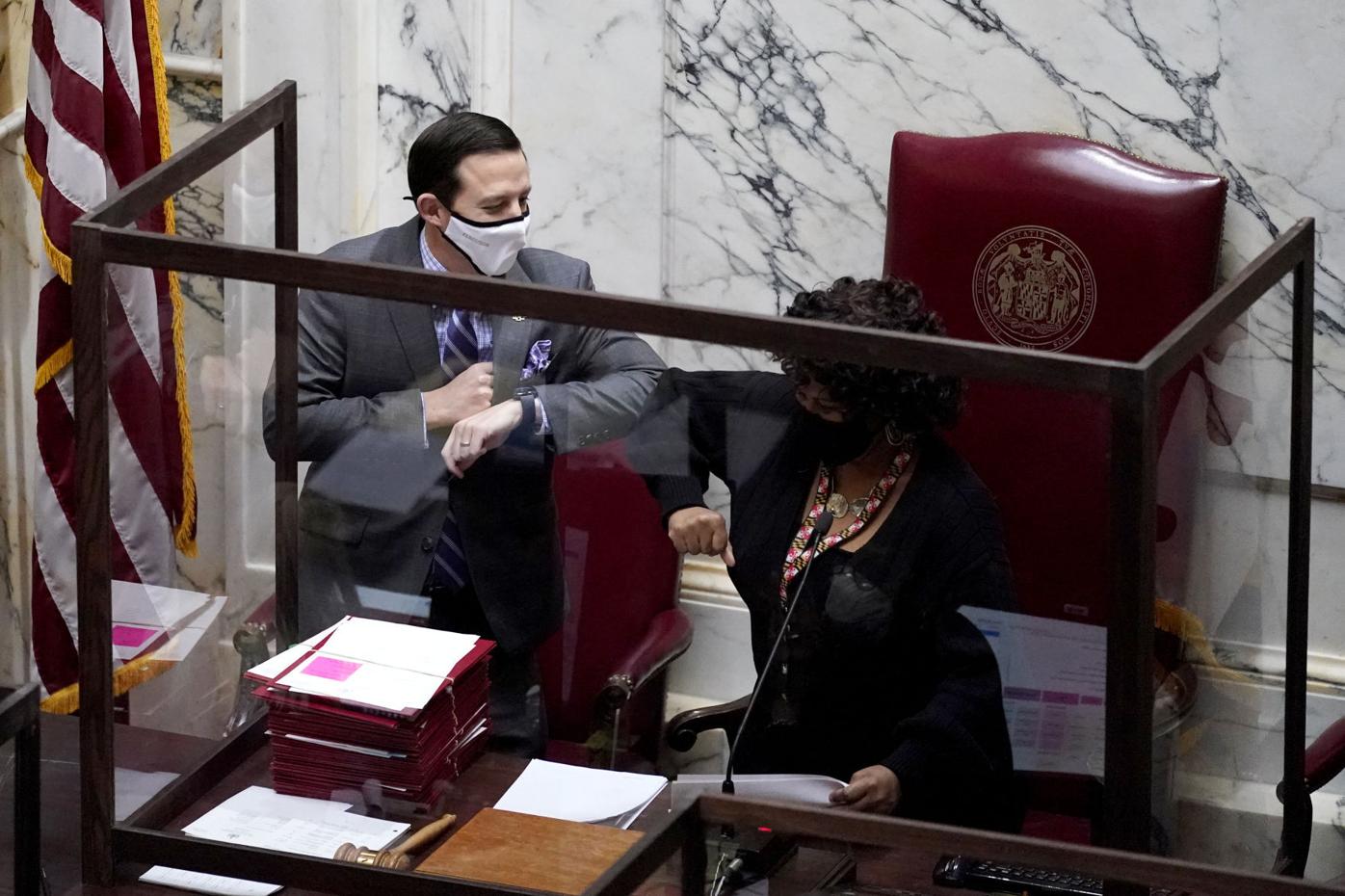 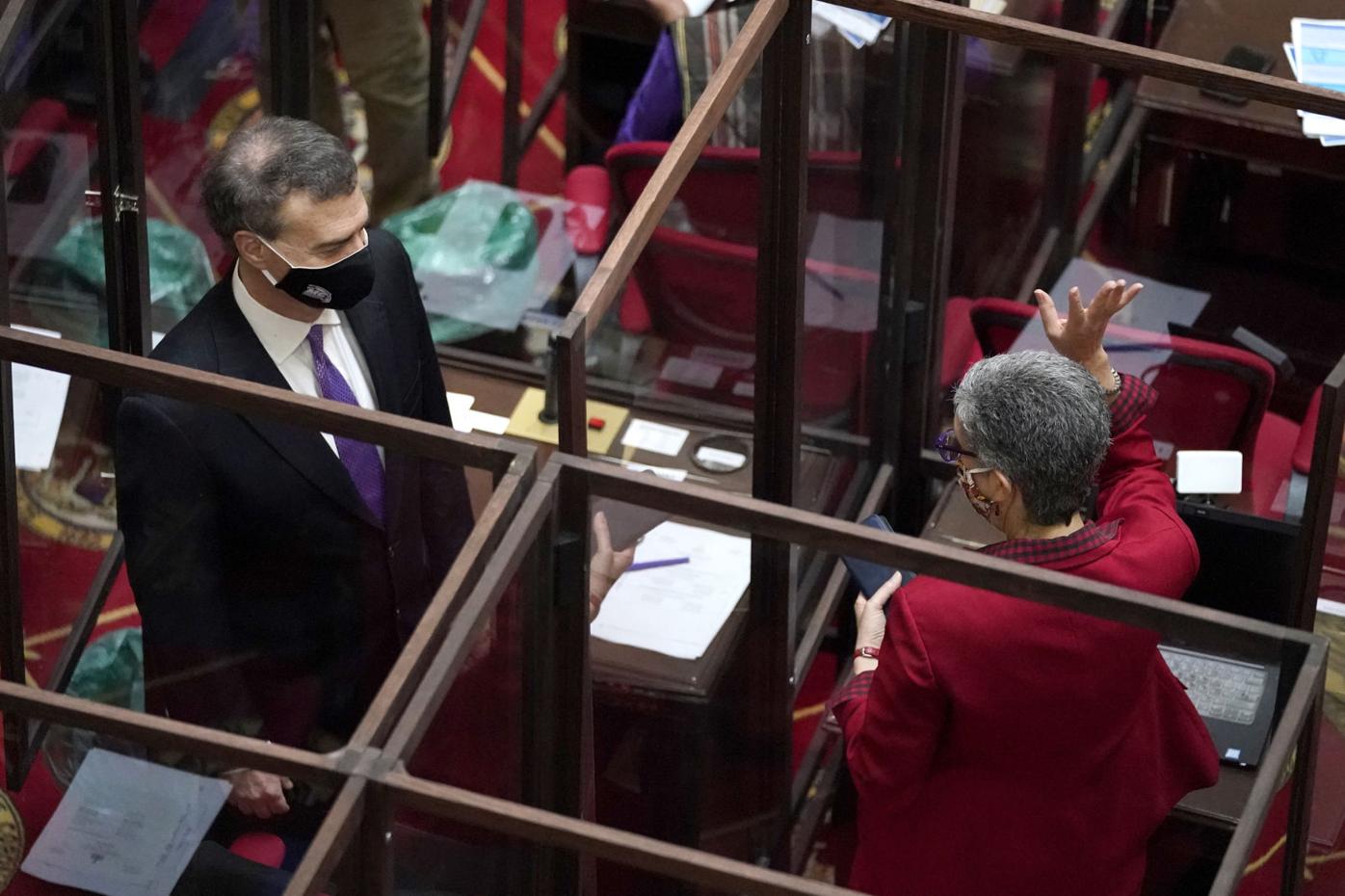 Members of the Maryland House of Representatives are seen socially distanced to prevent the spread of COVID-19 during the first day of the state’s 2021 legislative session, Wednesday, Jan. 13, 2021, in Annapolis, Md.

ANNAPOLIS, Md. (AP) — Maryland lawmakers gathered Wednesday for the first day of a legislative session transformed by precautions against the coronavirus and a commitment by leadership to focus on helping the state recover from the COVID-19 pandemic.

Legislative leaders moved quickly to formally change rules to accommodate safety measures. Both House and Senate leaders informed each other that their chambers could adjourn for more than three days at a time to help prevent the virus’ spread.

“First and foremost, the good news here is that I think there’s universal agreement that we have a fundamental problem, and that is vulnerable Marylanders need more support than they’re getting today,” Senate President Bill Ferguson, a Baltimore Democrat, told reporters. “That is the most important point of all of this. The other point of agreement is that we have to act urgently to get that support to Marylanders as quickly as possible so that they can hang on.”

Gov. Larry Hogan announced a $1 billion relief measure on Monday aimed at helping struggling residents and businesses. The Republican governor’s proposal would steer relief to about 400,000 residents with payments up to $450 for individuals and $750 for families. It also would repeal state and local taxes on unemployment and provides sales tax credits of up to $3,000 a month four four months for small businesses.

Ferguson said the Senate would move quickly to approve Hogan’s proposal, but with changes from senators he said have been working for the last 10 months to help constituents address problems they are facing. The Senate president stressed the need to improve the state’s unemployment system.

“We have a relief package and we’re going to prioritize that and see what the governor has in his bill,” Jones said during a morning on The Daily Record’s “Eye on Annapolis Summit.”

Hogan, who also appeared on the program, said approving a balanced state budget and his relief proposal were clearly top priorities.

“If the legislature passed the budget, passed some relief, I’d call it a huge success and call it a day,” said the governor, who will be releasing the annual budget proposal next week.

The General Assembly is scheduled to meet for 90 days. Last March, lawmakers adjourned 19 days early due to the virus, which is far more prevalent now than it was then.

Lawmakers also will be taking up a package of police reform measures. A House workgroup worked for months to develop reforms after protests in cities around the country last year in the aftermath of George Floyd’s death in Minneapolis. The Senate also has been working on a package of reforms.

Recommendations include requiring all police departments to use body cameras by 2025 and creating a standardized, statewide, use-of-force policy. Legislation also would ban chokeholds and create stronger punishment for use-of-force violations. The House also has recommended a repeal of the Law Enforcement Officers Bill of Rights — protections for officers that critics say make it difficult to hold police accountable.

The pandemic has transformed how the 442nd session Maryland General Assembly will be conducted.

The floor of the Senate is a warren of pods with transparent panels to shield senators. The House of Delegates has a substantial number of lawmakers meeting in a building across the street from the Capitol to enable a quorum of delegates to social distance in the chamber.

The Capitol is closed to the public. Proceedings in both chambers will be viewable online. Legislative hearings also will be done virtually, with members of the public able to testify on legislation online.

Hogan noted the sense of strangeness on the session’s first day during his appearance with The Daily Record.

“It is going to be kind of a surreal moment here as we start the legislative session, and it looks like a ghost town here in Annapolis,” Hogan said.

The Senate set up plastic shields for individual members in lieu of distancing its members. The House of Delegates kept members six feet apart and only invited 80 delegates into the chamber to sit in on the business of opening day.

Del. Johnny Mautz, R-37B-Talbot, said the invited members were selected in a lottery and he was not one of them. Mautz and about half of the 141 state delegates are expected to convene in a chamber annex this session for full-floor meetings.

While the circumstances were odd, even for a society that has been coping with changes related to the pandemic for nearly an entire year, the lawmakers got adjusted quickly and were able to take care of some procedural business.

From their “penalty box-style pods,” as Sen. Steve Hershey, R-36-Upper Shore, called them, the group of about 50 Senators voted to reelect Sen. Bill Ferguson, D-46-Baltimore City, as Senate president.

The House side voted to reelect Del. Jones, D-10-Baltimore County, as House speaker, and Del. Sheree Sample-Hughes, D-37A-Dorchester, as House speaker pro tempore. This year marks each of the three members’ second year serving in leadership.

Before Jones approached the podium to address the members on Wednesday, the clerk announced that there would be a pause for the podium to be sanitized. Jones did not give a speech but said, plainly, “We’ve got the people’s business to do, so let’s get started.”

Of the increased cleaning measures and 360-degree plastic partitions around each senator, Hershey said it was “very confining, almost uncomfortable.”

“I found it difficult to communicate with my colleagues sitting right next to me or behind me,” Hershey said. Though he said he understands it’s best “under the extraordinary conditions.”

Despite sanitation and distancing having noticeably intensified since the assembly adjourned early in 2020 when the pandemic hit Maryland, one thing looked relatively the same: the police presence inside and outside of the State House.

In light of President Donald Trump’s supporters’ recent storming of the U.S. Capitol and subsequent warnings of similar unrest at state capitals, there was an expectation that security might be heightened on opening day in Annapolis.

Only a few police vehicles idled outside of the building. Inside and at the doors, there was what seemed like a regular security presence compared to past years.

Del. Steve Arentz, who represents Queen Anne’s County and heads the Eastern Shore Delegation, said in an interview Wednesday afternoon he didn’t see anything that alarmed him in terms of police attendance either at the State House or across the street at members’ office buildings.

“I did see there were some police cars, but it wasn’t that much more (than usual),” Arentz said.

With compounding crises occurring across the country and in Maryland’s neighboring Washington, D.C., Mautz said he feels “a heightened level of anxiety among everyone.”

He said he doesn’t expect the chaos from the Capitol to percolate into Annapolis, but he predicts there will be increased interest in state-level lawmaking this session.

The Eastern Shore Delegation has its first delegation meeting today at 9 a.m. Arentz, who will be leading the meetings via Zoom video call, said it’s “gonna be fun.”

Arentz said he’s ready for session to be underway and urged people to keep an eye on policing reform, budget, energy, and coronavirus aid and relief bills that will be up for debate.