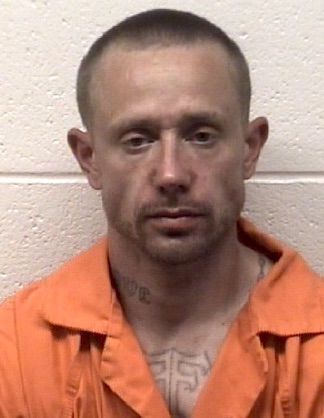 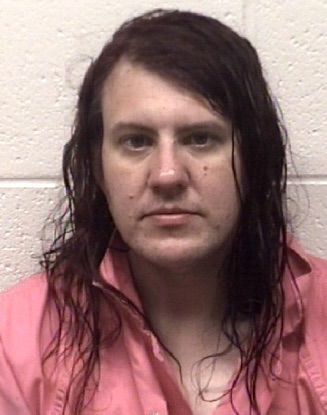 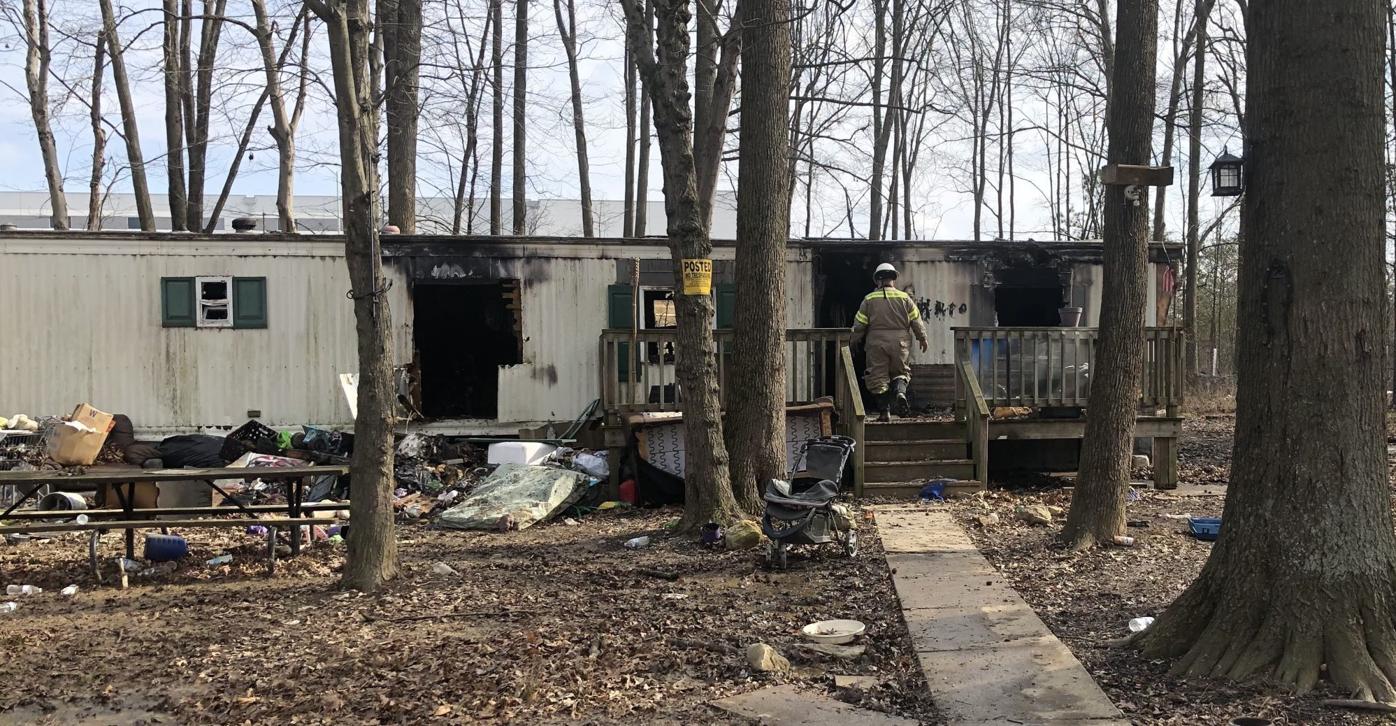 This file photo shows an investigator preparing to enter a gutted mobile home near North East on Feb. 10, hours after it had been torched. Investigators have arrested two suspects — one on Thursday, the other on Friday — and have filed numerous charges against them, including attempted murder and arson. 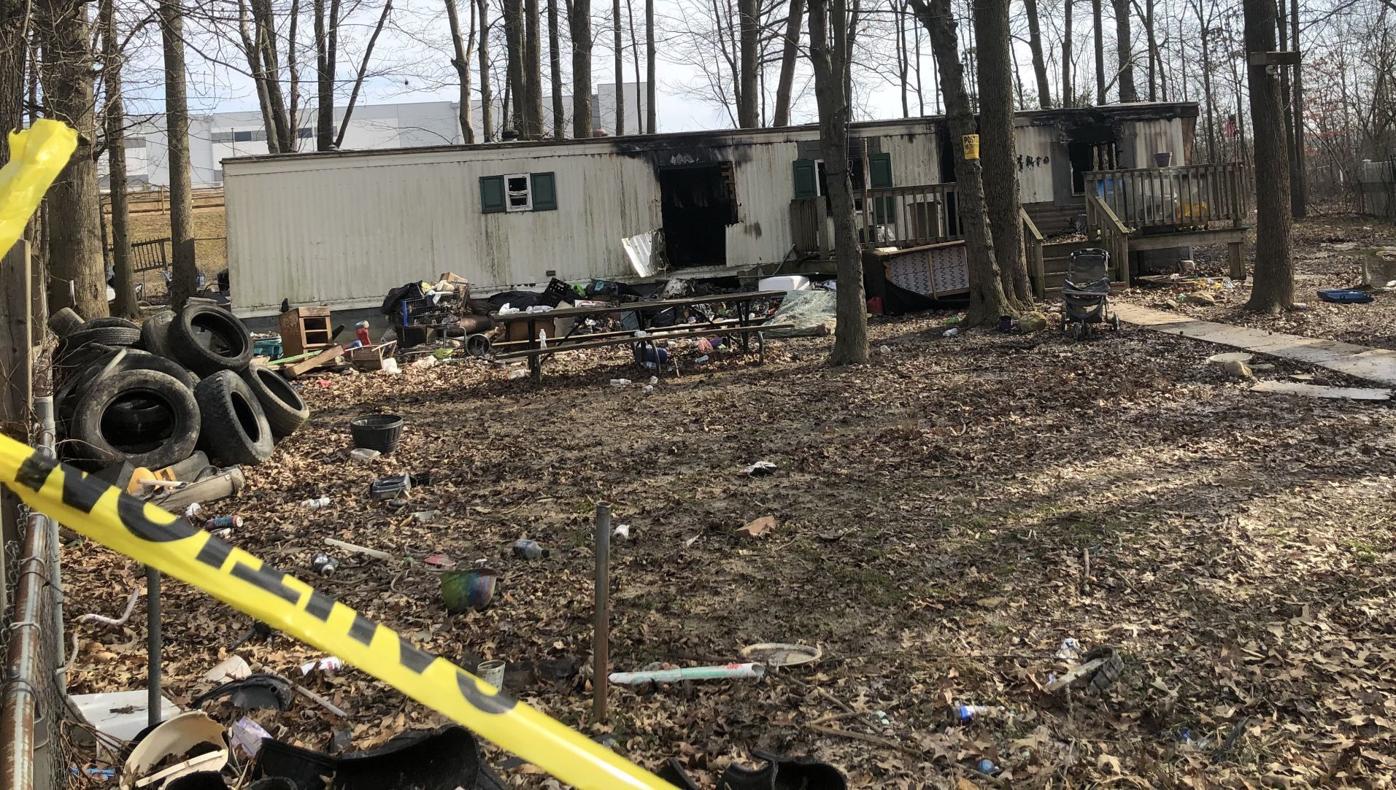 This file photo shows a gutted mobile home near North East on Feb. 10, hours after it had been torched. Investigators have arrested two suspects — one on Thursday, the other on Friday — and have filed numerous charges against them, including attempted murder and arson. 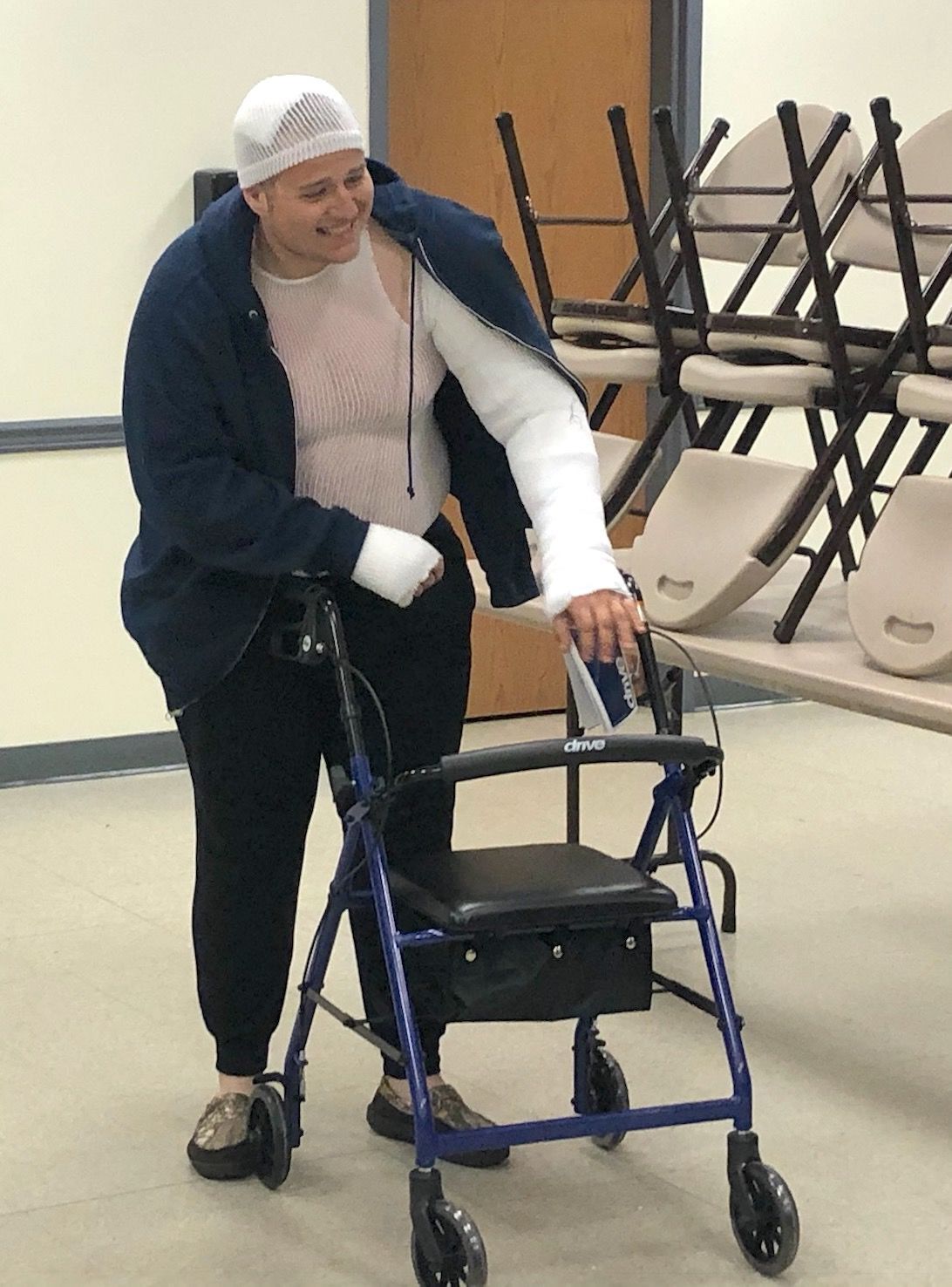 This file photo shows Charlestown Volunteer Fire Co. firefighter Danny Miller, 20, during his homecoming celebration on Feb. 19, after spending eight days in the hospital, where he was treated for burns suffered while battling an intentionally-set house fire near North East on Feb. 10. Fire detectives arrested two suspects in that arson case late last week. 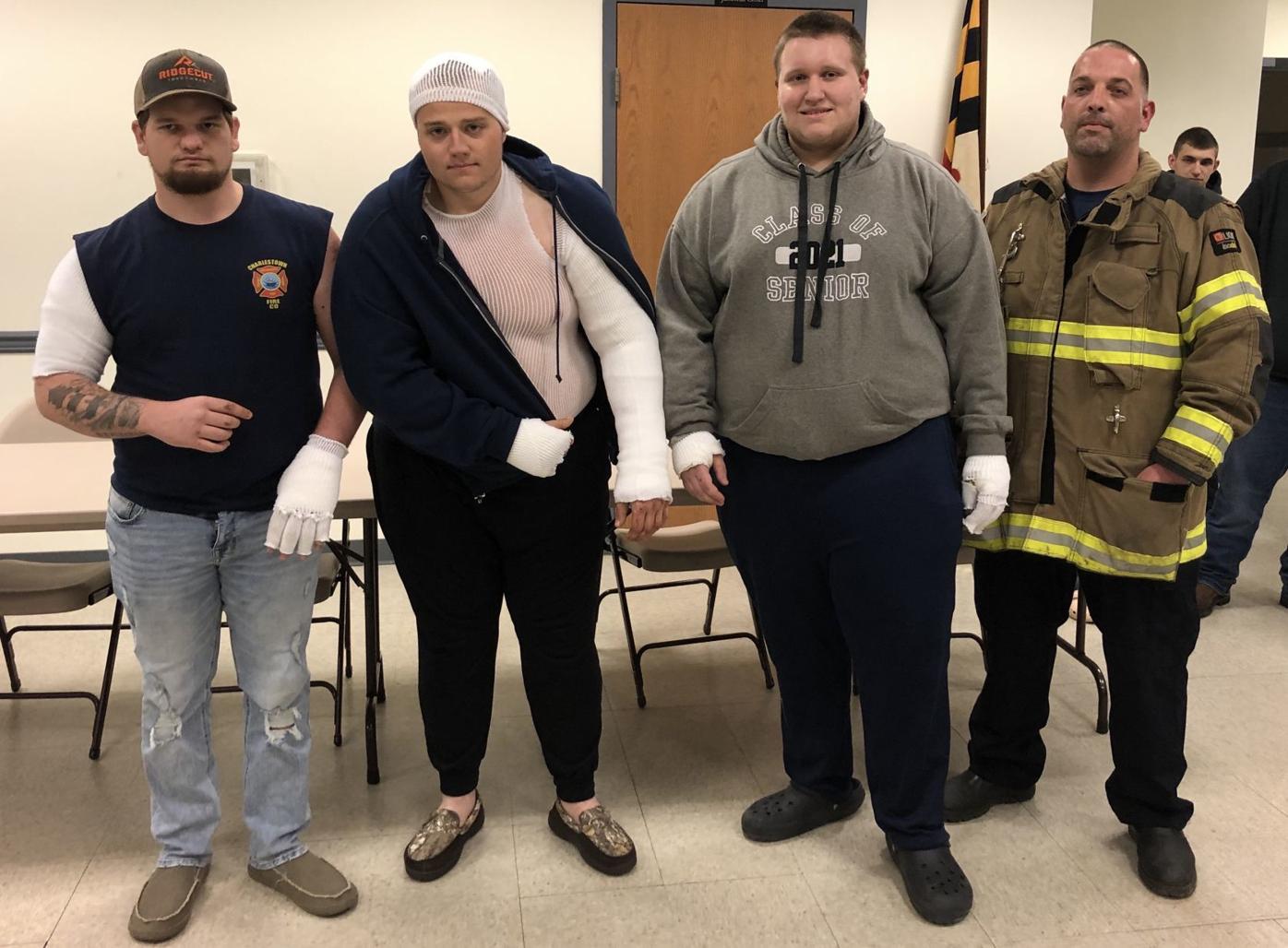 This file photo shows an investigator preparing to enter a gutted mobile home near North East on Feb. 10, hours after it had been torched. Investigators have arrested two suspects — one on Thursday, the other on Friday — and have filed numerous charges against them, including attempted murder and arson.

This file photo shows a gutted mobile home near North East on Feb. 10, hours after it had been torched. Investigators have arrested two suspects — one on Thursday, the other on Friday — and have filed numerous charges against them, including attempted murder and arson.

This file photo shows Charlestown Volunteer Fire Co. firefighter Danny Miller, 20, during his homecoming celebration on Feb. 19, after spending eight days in the hospital, where he was treated for burns suffered while battling an intentionally-set house fire near North East on Feb. 10. Fire detectives arrested two suspects in that arson case late last week.

NORTH EAST — Investigators have arrested two people and charged them with attempted murder, arson and other offenses in connection with an intentionally-set fire that destroyed an unoccupied mobile home near North East in February and resulted in four volunteer firefighters suffering burns, according to the Maryland Office of the State Fire Marshal.

Charging documents indicate that the fire was intentionally set after Holmes had made arson threats to his ex-girlfriend, who did not own the mobile home but had permission to stay there, court records allege.

Sr. Deputy State Fire Marshal Oliver J. Alkire reported that Holmes targeted the house because his former girlfriend had rejected his requests to renew their relationship and that he and Shires set fire to the place at a time when they knew the alleged victim normally would have been inside the dwelling.

“(Holmes’ former girlfriend) stated that her ex-boyfriend, Dwight Holmes, had previously made threats to burn down the mobile home,” according to charging documents.

Working in conjunction with members of the Maryland State Police Northern Region Strategic Operation Group (NRSOG), formerly known as the Gang Enforcement Unit, during the past two months, MOSFM detectives gathered information that Holmes and Shires were seen near the unoccupied mobile home shortly before the blaze gutted the building, Alkire reported.

Investigators also gathered physical evidence and other information that helped them develop Holmes and Shires as arson suspects, according to Alkire, who declined to provide details — noting that the investigation is ongoing and that releasing specifics could compromise it.

“During this contact, Holmes said he wanted to talk to someone about the fire that occurred in Lakeside where the firefighters were injured. Holmes was brought to the MSP North East Barrack and interviewed,” according to charging documents.

Holmes is facing 15 charges, including attempted second-degree murder, first-degree arson, first-degree malicious burning and reckless endangerment, court records show. He also is charged with four counts of second-degree assault on a firefighter — relating to the four volunteer firefighters who suffered burns while trapped briefly inside the burning mobile home, according to court records.

Scheduled for a May 28 preliminary proceeding, Holmes remained in the Cecil County Detention Center without bond on Tuesday, one day after his bail review hearing, court records show.

Facing the same 15 charges, which include some mirroring conspiracy counts, Shires also remained in the county jail without bond on Tuesday after her bail review hearing one day earlier, according to court records. She, too, is scheduled for a May 28 preliminary hearing.

Information regarding Shires’ relationship to Holmes and her possible motive for allegedly participating in the arson was unavailable, as of Saturday.

Charging documents allege that, shortly after the fire was discovered on Feb. 10, a witness received a message from Holmes through Shires’ social media account.

“While investigators were on scene, a witness (W1) approached investigators and stated that, shortly after the discovery of the fire, he received a call from a Jessica Shires account through Facebook messenger telling W1 to ‘grab the marshmallows.’ W1 identified the person using Shires’ account as Dwight Holmes,” court records allege.

During her police interview, when asked about “getting justice for the injured firefighters,” Shires told investigators, “They should arrest me and they will get their justice,” according to charging documents.

At the conclusion of the interview, Shires remarked that she “figured she was going to be arrested when coming in” to meet with investigators, court records allege.

A neighbor called 911 at 12:42 a.m. on Feb. 10, after discovering the burning, unoccupied mobile home in the 100 block of Superior Court, fire officials said. Approximately 40 firefighters, serving with several area volunteer fire companies, battled the blaze for about 30 minutes before bringing it under control, fire officials added.

With smoke and fire showing inside the vacant mobile home, three Charlestown Volunteer Fire Co. firefighters — all wearing their turnout gear and using their SCVAs (self contained breathing apparatus) — entered the burning building through the front door to search for possible trapped occupants.

“They made a left, once they were inside the trailer, and, approximately two minutes later, the conditions deteriorated. The fire flashed within the house and it spread very quickly. They could no longer exit through the door they had used to enter,” Alkire outlined at the time.

He further reported that a “mayday” was called, which he likened to an “all-hands-on-deck” situation, and a signal sounded for firefighters inside the building to evacuate. The trapped volunteer firefighters escaped through a window, with the assistance of fellow firefighters and police officers.

CVFC firefighter Danny Miller, 20, suffered burns to a large portion of his upper body. An MSP helicopter crew flew Miller to the Bayview Burn Center near Baltimore, where he spent eight days receiving treatment before his discharge. A homecoming celebration was held at the CVFC hall on Feb. 19, when he returned from the hospital in a motorcade.

Entering the burning building with Miller and also suffering burns — of lesser and varying degrees — were two of his fellow CVFC firefighters — Ryan Jenkins, 22; and Jordan Heverin, 17.

An MSP helicopter crew flew Heverin, along with Miller, from the fire scene to the Bayview Burn Center in Baltimore. Treated for burns to his hands and his arm, Heverin spent two nights at the hospital before he was discharged.

An ambulance crew transported Jenkins from the fire scene to that same burn center, where he spent one night before he was discharged. Jenkins was treated for burns to right shoulder and left hand.

A North East Volunteer Fire Company firefighter also suffered burns to his hands when he attempted to enter the burning building, knowing that Miller, Heverin and Jenkins were in distress inside the structure. An ambulance crew transported him to Union Hospital in Elkton, where he was treated and later discharged.

Within a day after the blaze, Alkire reported, “We have confirmed that this fire was intentionally set. The person or people doused the front porch with ignitable liquid, which we suspect is gasoline, and also circled the house with it and then ignited it. This is an arson.”

Alkire told the Cecil Whig that his specially-trained scent dog, K9 Katrina, “alerted multiple times” to the presence of accelerant during an aftermath, fire-scene investigation.

“We also collected multiple pieces of evidence, and it has been sent to the Maryland State Police Crime Lab for analysis,” Alkire said at the time, declining to specify the gathered evidence in an effort to preserve the integrity of the ongoing investigation.

Deputy Chief State Fire Marshal Derek A. Chapman, who is commander of the agency’s Northeast Regional Office, noted that MOSFM detectives worked closely with the Maryland State Police, the Cecil County Sheriff’s Office, the Cecil County State’s Attorney’s Office and Alcohol, Tobacco and Firearms during the investigation, which has lasted 11 weeks and is continuing.

“There is no doubt this fire caused anxiety and great concern, not only with the public but our partners in the fire service. The response and investigation have consumed an enormous amount of time and resources. The investigations comprised a true team effort among all the agencies and those investigators involved,” Chapman said.

“The effects of arson have far-reaching implications and are detrimental to the safety of our communities. Beyond the malicious destruction of property, acts of arson are extremely dangerous and risk the lives of innocent persons and our first responders,” Geraci commented.