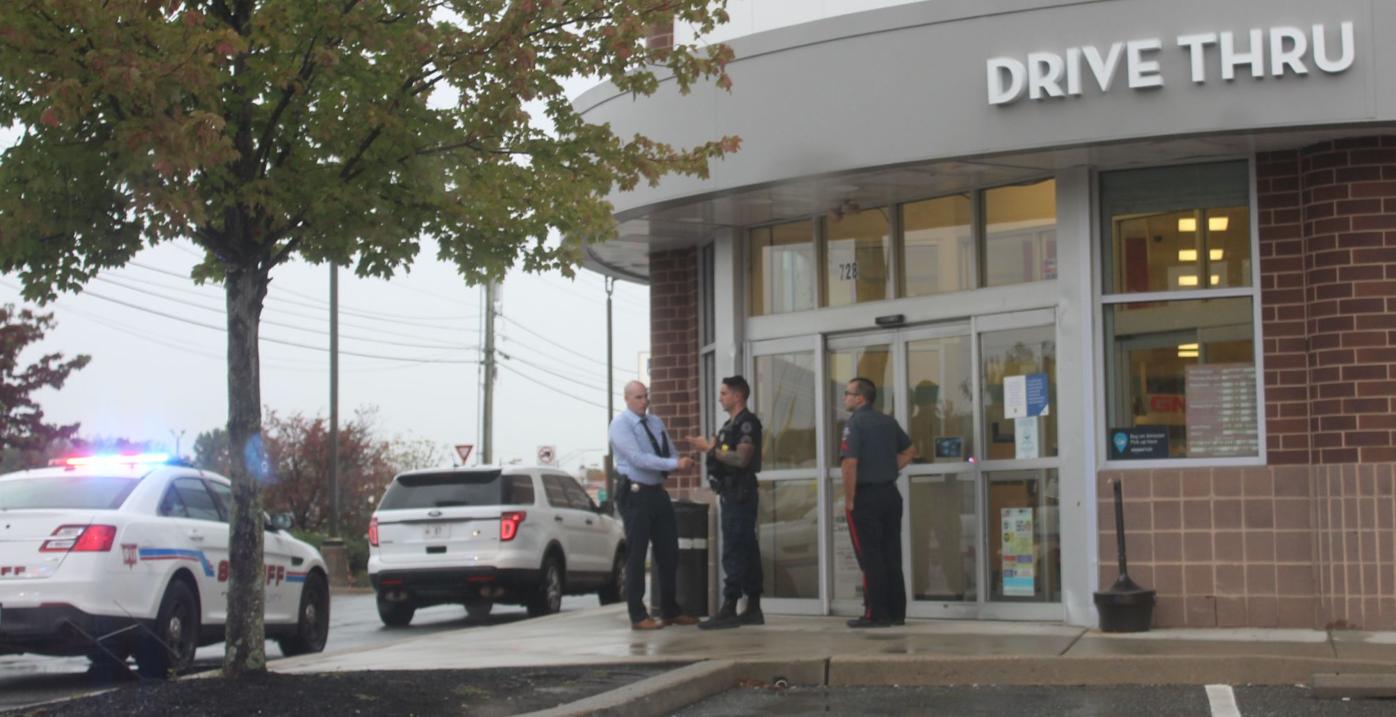 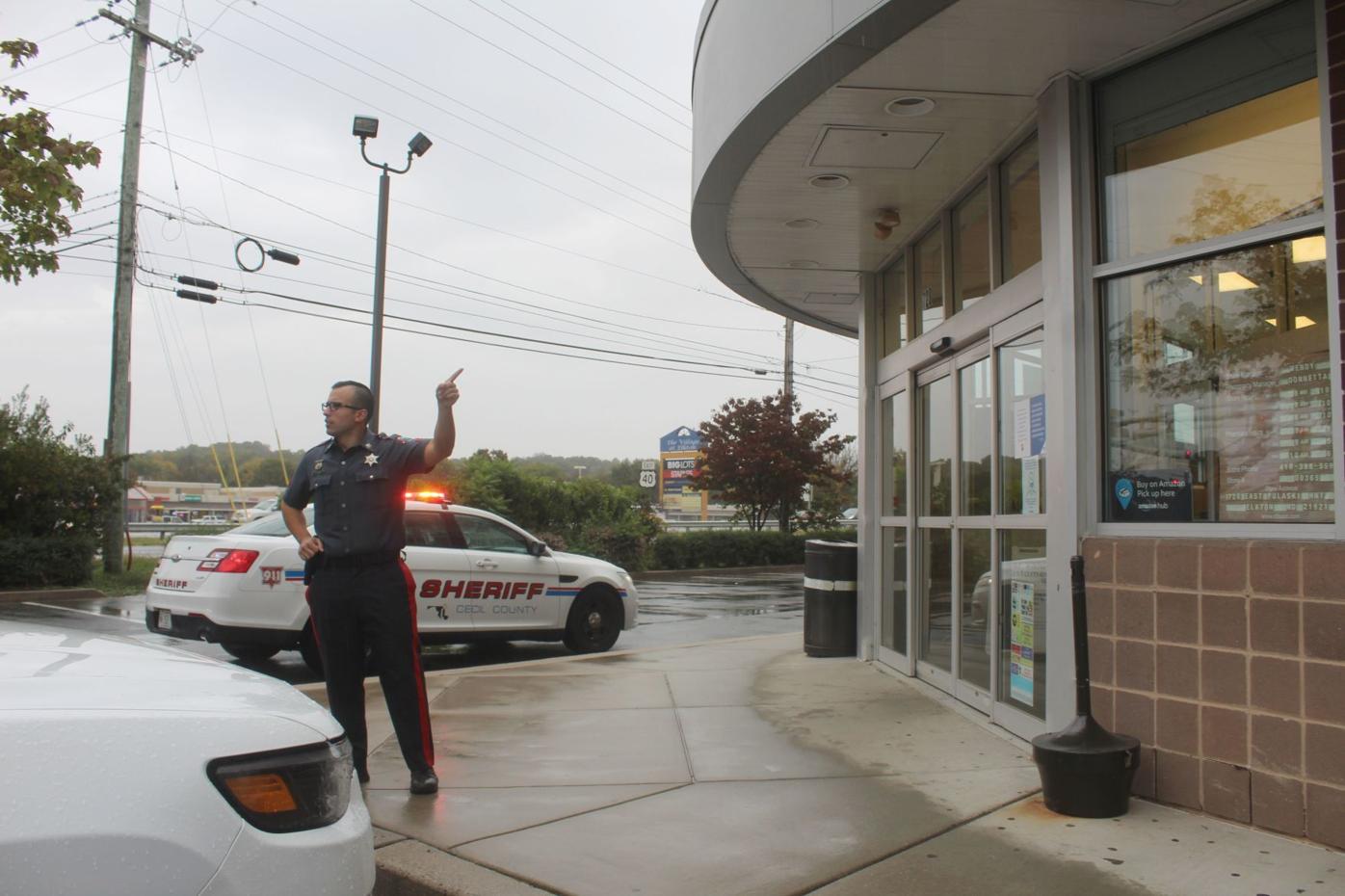 A Cecil County Sheriff’s Office deputy directs Rite Aid patrons to use the drive-thru on Friday afternoon, allowing CCSO detectives to investigate an armed robbery that occurred at that Elkton-area store moments earlier. 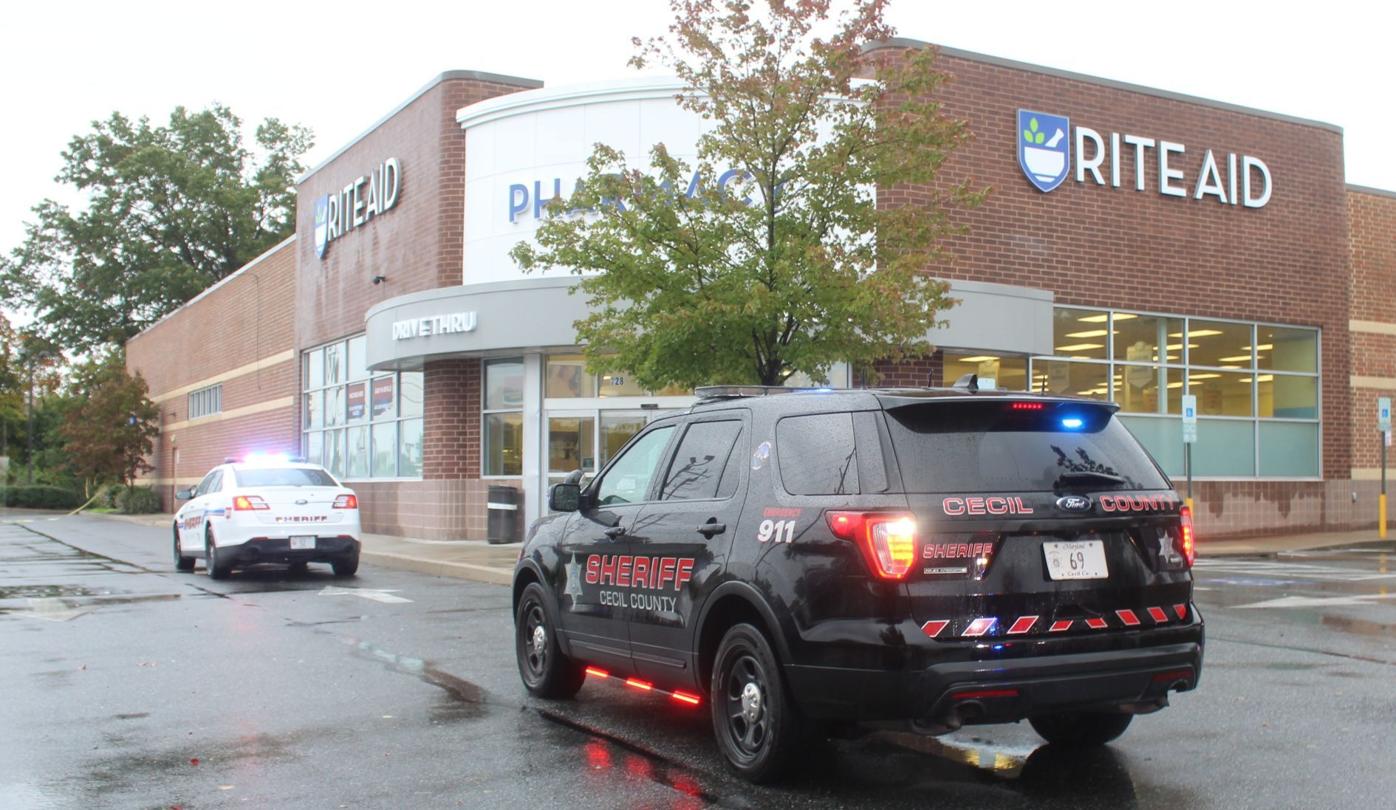 A Cecil County Sheriff’s Office deputy directs Rite Aid patrons to use the drive-thru on Friday afternoon, allowing CCSO detectives to investigate an armed robbery that occurred at that Elkton-area store moments earlier.

ELKTON — A gunman and his two accomplices remain on the loose after robbing an Elkton pharmacy of prescription medication on Friday afternoon – marking the third such holdup in and near this town in the past five weeks, police reported.

The other robbery in this recent rash of pharmacy holdups also involved a handgun and three similarly dressed robbers.

But he added that CCSO detectives — they are investigating this latest Rite Aid holdup and the first one in the series — and Elkton Police Department detectives, who are investigating last month’s armed robbery of Walgreens pharmacy in that town, have not concluded that the same three men are responsible for all of them.

In this latest incident, three men entered the Rite Aid at approximately 12:15 p.m. Friday and walked to the pharmacy department, police said. There, police added, one of the robbers brandished a handgun while demanding prescription painkillers.

After the pharmacy employee surrendered an unspecified number of pills or tablets to the bandits, the trio left the store and got into a “small, dark-colored SUV,” which was last seen heading east on Route 40 toward the Delaware state line, according to Holmes, who further reported, “It’s possible that they traveled on Delancy Road.”

Store surveillance cameras videotaped an unspecified portion of the armed robbery and, as of late Friday afternoon, CCSO detectives were studying the footage in hopes of identifying the culprits, police reported.

Anyone with information that might help investigators identify the robbers and, or, locate them is asked to call Cecil County Sheriff’s Office Det. Kyle Pattman at 443-309-0178.

On Sept. 9 — some 37 days earlier — three men dressed in dark clothing, including masks and gloves, entered that Rite Aid at approximately 8 a.m and approached a store employee, police said. At that time, police added, one of the men brandished a black handgun and instructed the worker to lead them to the pharmacy section.

The men fled from the store, however, after they realized that the pharmacy section was not open for business at that hour, Holmes said after that attempted holdup some five weeks ago. After fleeing the store, the suspects got into a vehicle described as a “tan or silver four-door sedan,” which was last seen heading east on Route 40 toward the Delaware state line, he added.

Store surveillance cameras videotaped the gunman and his two accomplices, as well as their getaway car, during that attempted robbery.

As of Friday, arrests had not been made in that case.

In that Sept. 21 robbery, which occurred 12 days after the first incident in the series, three men dressed in dark clothing entered the Walgreens in the 300 block of East Pulaski Highway at approximately 9 p.m. and approached a worker at the pharmacy counter, according to police.

“One of the suspects brandished a handgun, and they demanded narcotics,” said EPD Det. Sgt. Ronald Odom, who, after declining to specify the drugs that they sought, qualified, “It is fair to say (prescription) painkillers, the stuff that sells out on the streets.”

The pharmacy employee surrendered an “extensive amount” of prescription medication to the robbers, who then ran out of the store, police reported.

“This is not a group of drug addicts stealing narcotics; they are professional robbers and thieves. They knew what they were doing. They were wearing gloves and masks and they were covered from head to toe in dark clothing,” Odom outlined.

Store surveillance cameras videotaped the three suspects during the armed robbery, too, he reported.

Anyone with information that might help investigators identify the three men involved in the Sept. 21 armed robbery at the Walgreens is asked to call EPD Det. Josh Leffew at 410-398-4200, ext. 40.

The two pharmacy robberies and the attempted pharmacy robbery in the Elkton area during the past five weeks mark the first reported incidents of someone robbing or trying to rob a Cecil County pharmacy in approximately four years.

According to Cecil Whig archives and court records, there have been a couple of long periods during the past 10 years in which robbers — exhibiting no interest in money inside the cash registers — have stolen or have attempted to steal prescription painkillers and other medication from pharmacies in this county.