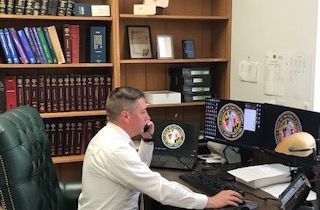 State’s Attorney for Cecil County James Dellmyer working in his office recently. Over the last couple of years major changes have come to the office in the form of additional staff and new processes. 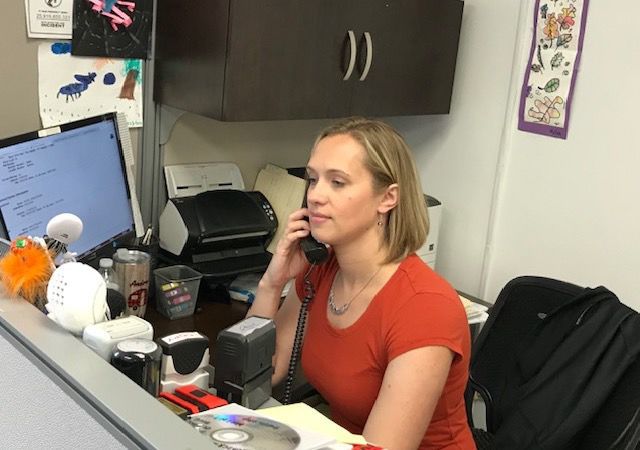 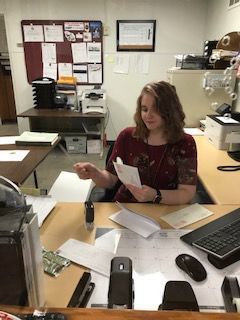 State’s Attorney for Cecil County James Dellmyer working in his office recently. Over the last couple of years major changes have come to the office in the form of additional staff and new processes.

Over the last couple of years the Cecil County State’s Attorney’s office has seen a number of changes meant to improve prosecutions throughout the county, including developing a strong rapport with area law enforcement and moving to a more full-time staffing mindset.

The plan initially came into effect in 2018 with the election of former State’s Attorney Amanda Bessicks and has continued since March of 2019 under current State’s Attorney James Dellmyer.

Dellmyer, who has been with the state’s attorney’s office since February of 2017, said when he initially started at the office he was a part-time prosecutor handling a variety of cases, first in district court and then handling special victims cases. Dellmyer noted initially, out of 13 prosecutors in the office, only five were full-time with the remaining eight positions being part time.

Dellmyer said the idea of moving to full-time prosecutors is in part because it is extremely challenging to be a part-time state’s attorney while also juggling a private practice. He noted that to do a good job it was important for prosecutors to give 100 percent of their time to the job.

“I just didn’t think citizens were getting value out of it,” he said. “It wasn’t a good value for what citizens were paying in salaries.”

Dellmyer added that the system of part-time attorneys was also inefficient and wasn’t a practical way to run an office.

The part-time staffing issue though was originally codified in Maryland Code Title 15, specifically section 15-408, which deals with Cecil County. Under section 15-408 ©(3)(ii), assistant state’s attorneys in Cecil County serve in a part-time capacity.

“The office is still statutorily part-time, but the policy of the office since 2018 is full-time,” said Assistant State’s Attorney Robert E. Sentman, who supervises the office’s general felony unit.

Dellmyer said that he has begun having conversations with local delegates as well as other officials in Annapolis to effect a change to the statute. He said the plan is to introduce a bill to change the statute in the next couple of years. His office has, however, begun to implement changes to the staffing arrangements of the office and now has 14 full-time prosecutors with one part-time prosecutor.

One of the other significant changes over the last couple of years is the office’s effort to develop a strong relationship with local law enforcement. To that end, the office has made a point to hire retired law enforcement officers in good standing to be in-house investigators for the office.

Chief Investigator Stephen Barlow, who also serves as the office’s public information officer said that the office has made tremendous in-roads to establish a direct line of communication with officers.

Barlow said it took several months to develop a strong communication connection between the office and law enforcement that was developed by participation in intelligence meetings, among other things.

“Everyone is super excited,” Barlow said about the connection that has been fostered, “During normal hours on Monday we have open time for officers to come in and meet with attorneys and ask questions or go over a case. We want to be available to help anyway we can.”

Dellmyer said this connection is part of a complete approach the office takes to prosecuting crimes.

“We value partnering with law enforcement,” he said. “It is one of those relationships that needs to be developed more.”

One of the other areas the office has changed is in implementation of the Maryland Criminal Intelligence Network, a grant program under the Governor’s Office of Crime Prevention, Youth and Victim Services.

The program was announced in December of 2017 by Gov. Larry Hogan as a series of initiatives to combat criminal gang enterprises and repeat violent offenders.

According to the governor’s website for MCIN, the program is a criminal justice strategy that targets gangs, drugs, firearms and human trafficking related offenses.

MCIN’s goals are focused on identifying, disrupting and dismantling criminal networks through collaboration and comprehensive data sharing, according to the site.

“We were one of the first to really implement the program the way the governor envisioned it,” Dellmyer said.

Dellmyer noted that the goal of the program is to help identify violent and repeat offenders and do special investigations utilizing the most experienced prosecutors. As part of the program, Dellmyer’s office receives funding sufficient for a paralegal/crime analyst position and a portion of an attorney’s salary.

“The way we look at it, by using intelligence driven prosecution, my office is better able to identify and prosecute the most serious criminal offenders,” he said. “This is an exciting program.”

Dellmyer said his office isn’t just focused on prosecuting offenders, noting that his office has also worked closely with the Circuit Court for Cecil County to expand the court’s drug court program, including expanding the program’s availability to district court cases to help those who need it get the treatment they need.

Dellmyer said the framework that now exists in the office is a unit based model with units that include: a drug crimes unit, a MCIN unit, special prosecutions, special victims unit and a general felony unit. Dellmyer said the office also has an investigations unit, administrative unit, district court unit and a victim services division.

Everyone that works for the office is housed at the Cecil County Circuit Courthouse with the exception of the office’s chemist, who works at the Maryland State Police’s Forensic Services Division in Pikeville. Dellmyer said that while the chemist works at MSP, she solely works for Cecil County, which is a very convenient arrangement for the office.

According to Sentman, the office now has 31 positions, which is up from just four years ago when the state’s attorney’s office had a figure in the low 20s. Dellmyer said the expansion in the office has been out of necessity based upon data driven analysis.

Dellmyer said that a comparison study was done comparing Cecil County to Wicomico County as the two counties have a very similar population, but dissimilar crime statistics.

For instance, in 2018, Wicomico County had 34 staff members including attorneys and administrative staff, while Cecil County had only 27. In comparison though, Cecil County’s crime rate at the time was nearly twice that of Wicomico County. Dellmyer said the increase in staffing was due to discovering the office was behind the times and was not as effectively able to handle cases due to not being properly staffed.

“We have worked closely with county officials to have a slow responsible development for the office,” he said noting that the growth necessary was done slowly so as not to increase the burden on taxpayers.

Dellmyer said his approach is very data driven and the office has also made improvements in technology and other areas such as case management that have helped to streamline the office’s efficiencies.

Fitzgerald said the office has become more of a paperless office as improving work with law enforcement has led to an improvement in getting documents for disclosure to defense attorneys.

Dellmyer also noted improvements in community interaction and that the office has pushed a strong social media presence in order to better interact with citizens.

One of the specific areas Dellmyer where noted an improvement, was prosecutors reaching out and working more closely with the Cecil County Child Advocacy Center. He noted that prosecutors handling those cases were required to work closely with forensic interviewers and social workers and attend weekly meetings to strengthen the bond between the office and the center.

Dellmyer said that overall the changes have made the office more efficient and streamlined and has resulted in improvements such as a decrease in the county’s overall crime rate.

“This is what a prosecutors office is supposed to be,” he said. “We have a duty to work with law enforcement to protect our citizens.”

Fitzgerald said she was excited about the policies as well, especially those that focus on protecting victims and citizens. She noted that everyone in the office shares the same goals and that now younger attorneys are being taught the proper methods to be skilled prosecutors.

Administrative Chief of Staff Carrie Flaugher said that the office is more fluid now than it was before.

“There is a lot more structure now,” she said “It does make work easier. There is also a better accountability, I think everyone is honestly more at ease now.”