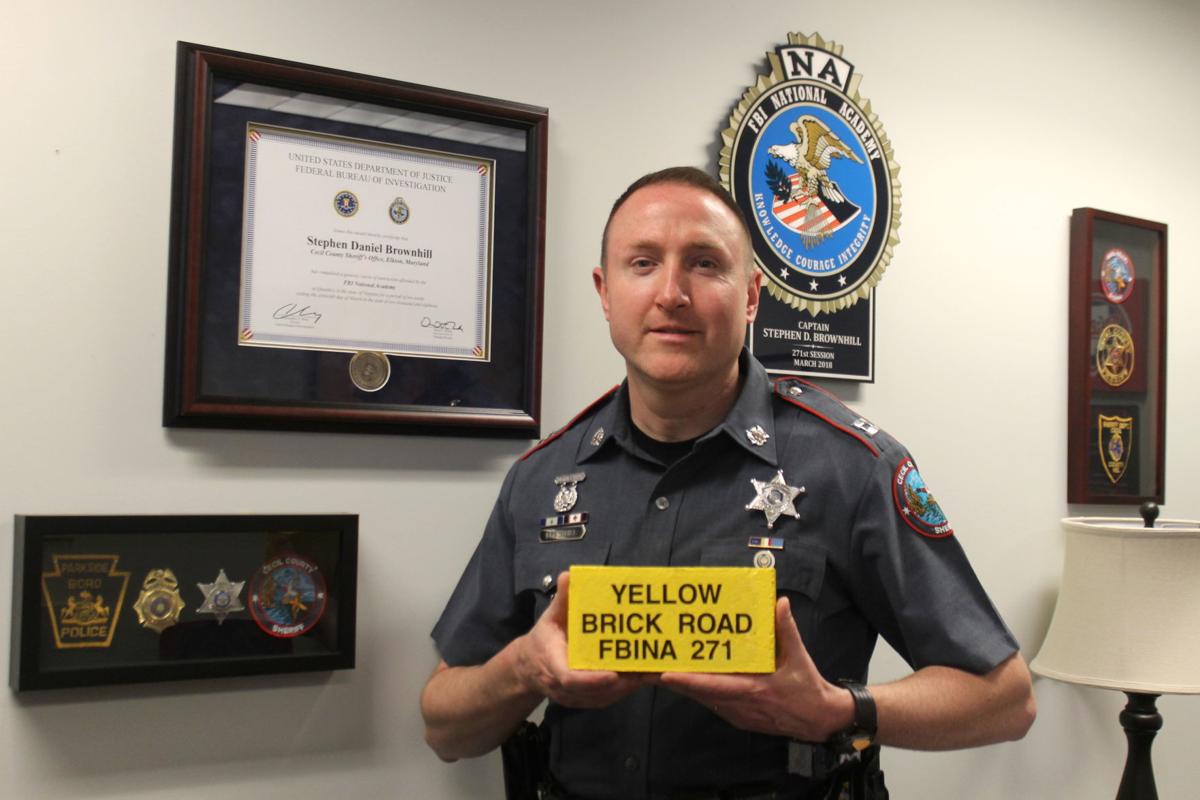 Capt. Stephen Brownhill, of the Cecil County Sheriff’s Office, holds the commemorative brick he received for completing a 6.1-mile obstacle course while attending the FBI National Academy Program at Quantico, Va. Behind him (right) is his FBI plaque and (upper left) his FBI academy program diploma. 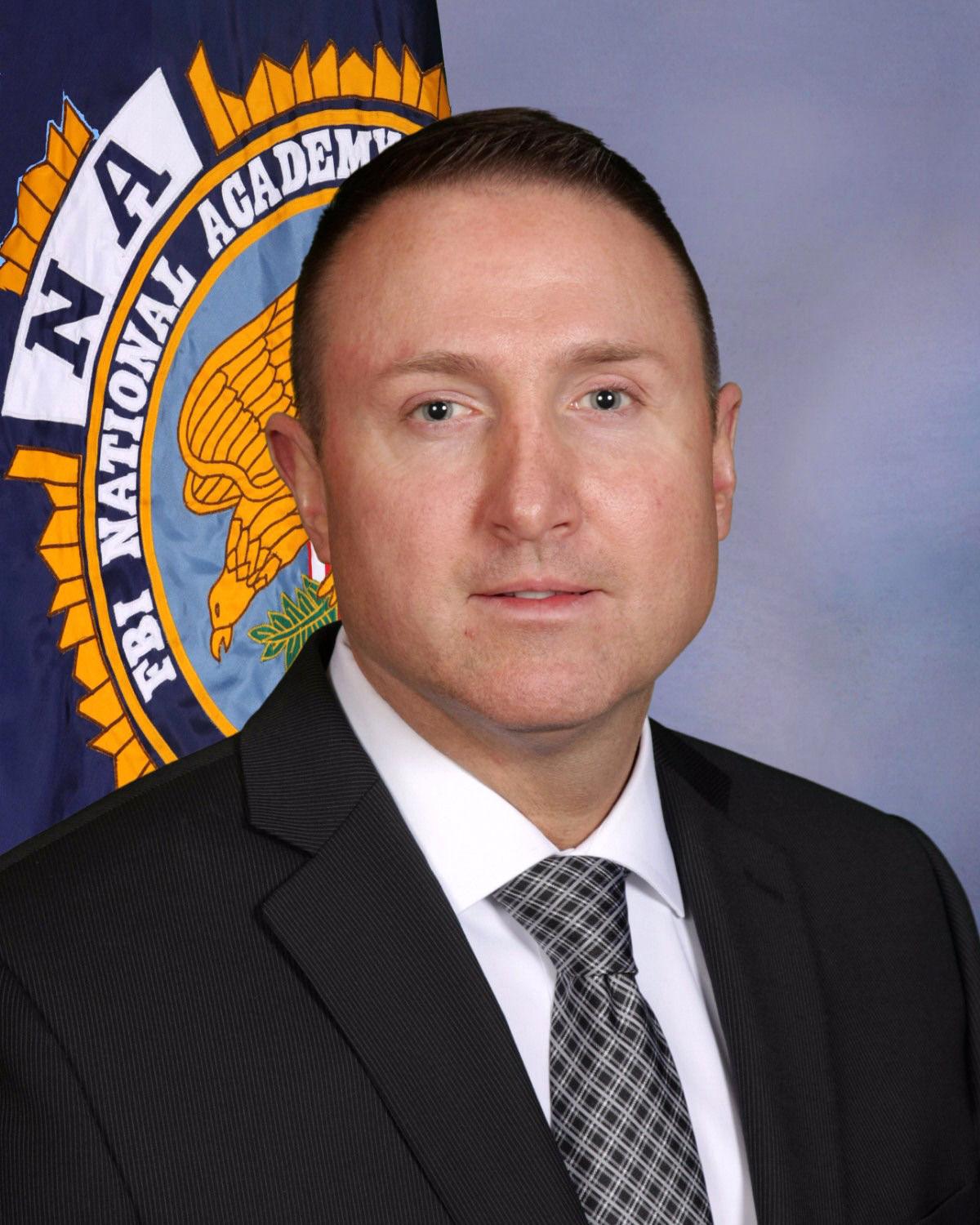 This is an official FBI portrait of Capt. Stephen Brownhill of the Cecil County Sheriff’s Office. The photo was taken after Brownhill graduated from the 271st session of the FBI National Academy Program. 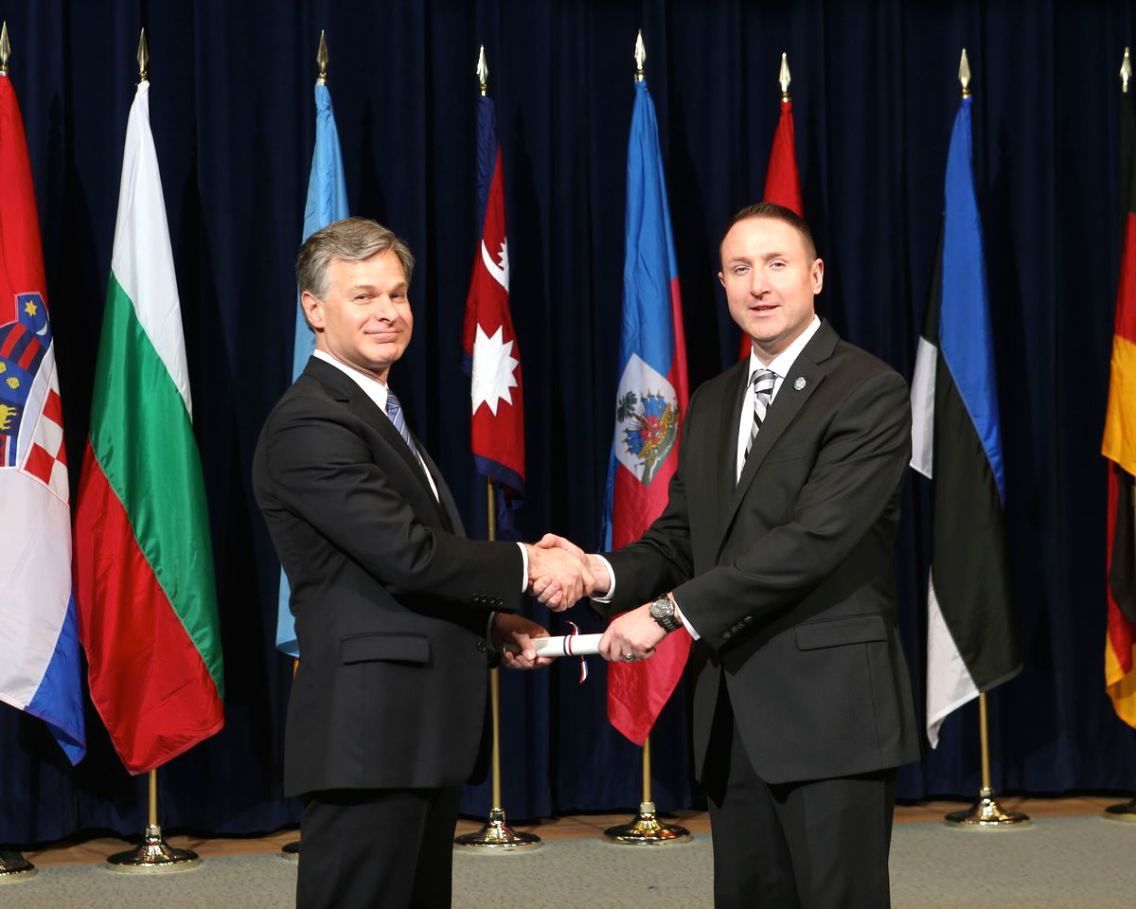 Capt. Stephen Brownhill, of the Cecil County Sheriff’s Office, holds the commemorative brick he received for completing a 6.1-mile obstacle course while attending the FBI National Academy Program at Quantico, Va. Behind him (right) is his FBI plaque and (upper left) his FBI academy program diploma.

This is an official FBI portrait of Capt. Stephen Brownhill of the Cecil County Sheriff’s Office. The photo was taken after Brownhill graduated from the 271st session of the FBI National Academy Program.

It bears little monetary value. How he earned that brick, however, means a great deal to Brownhill.

Brownhill, a 20-year Cecil County Sheriff’s Office veteran, received the brick last month after completing a grueling 6.1-mile obstacle course at Quantico, Va., where he had spent the past 10 weeks participating in the 271st session of the intense FBI National Academy Program.

The obstacle course — designed by the U.S. Marines Corps — served as the last of numerous physical fitness challenges for Brownhill and his classmates during the training program and was, by far, the toughest.

“They set you up for success. Every week we had a different fitness challenge, building up to the obstacle course,” Brownhill explained.

Even so, not every one was able to finish that obstacle course.

Physical fitness is just one of the facets of the FBI National Academy Program, which started in 1935 and now has 50,808 graduates, including Brownhill, as alumni.

In his session, running from Jan. 8 through March 16, Brownhill was among 223 law enforcement officers in executive-level positions from 48 states and 18 countries, including Australia, Bulgaria, Canada, China, Croatia, Germany, Haiti, Israel, Lebanon, Nepal and Morocco.

Brownhill’s long days also were filled with an array of police-related classes taught by instructors who are highly-regarded in law enforcement. Brownhill’s elective courses included media relations and emerging drug trends, which, given Cecil County’s well-documented heroin problem, will serve him and his agency well.

By graduating from the National Academy Program — there was a commencement ceremony in which FBI Director Christopher Wray was the principal speaker — Brownhill earned 17 undergraduate credits through the affiliated University of Virginia.

Brownhill holds the distinction of being the first Cecil County Sheriff’s Office member to attend the FBI National Academy Program.

“It’s truly an honor to represent Cecil County and the Sheriff’s Office and to be the first to attend,” he said.

Brownhill’s graduation from the national program met a goal that Cecil County Sheriff Scott Adams had set when elected to the office in 2014.

“I was surprised to learn that no one from the Sheriff’s Office had ever attended the FBI National Academy Program,” Adams said.

“He was the perfect candidate. He is well-respected, with great leadership skills, and has worked his way up the ranks. He has performed many duties here,” outlined Adams, listing patrol deputy and detective in the agency’s Criminal Investigations Unit as some of them.

Because the national academy is so elite, the application process to get Brownhill into the program started in 2015, some three years ago. It involved interviews, background checks, physical fitness tests and so forth. Brownhill also had to receive an endorsement from a panel of national academy alumni.

“It is one of the most sought-after executive law enforcement training opportunities in the world,” Brownhill said.

Brownhill shared a dorm room with a Texas Highway Patrol officer, who also went through the daily physical fitness regimen and classes.

“My alarm went off at 5:18 every morning,” Brownhill noted.

Because of the program’s academic demands, Brownhill was unable to come home as many weekends as he would have liked.

“Living in a dorm environment, away from my family, was the hardest part of it for me,” Brownhill said. “I wrote countless research papers and studied. My weekends were tied up writing papers and researching.”

The classes were superb, according to Brownhill, commenting, “I can’t say enough about the professionalism and the level of instruction. It is second to none.”

Not all of the learning, however, occurred in the classroom. Because of the professional common ground among the 223 students, there was plenty of shoptalk.

“Networking was a major component of it. It was an invaluable experience, a once-in-a-lifetime opportunity to network with law enforcement officers from throughout the country and from all over the world,” Brownhill said. “We shared our experiences. We talked about various law enforcement issues and about best practices. I gained valuable information from all of that.”

Moreover, with access to the class roster, he has those contacts on his computer.

“I now have a network of worldwide law enforcement professionals,” Brownhill said, adding, “Since graduating, I have communicated almost daily with my classmates. Just this morning, one of my classmates brought up a program his agency is planning to implement and that led to a (social media) discussion on (gun) holster safety. In a matter of minutes, we were receiving opinions and insights from classmates all over the world.”

Beyond the training that Brownhill received in the national academy, he — and the rest of CCSO — gained a sense of accomplishment, according to Adams.

“It is validation that we are moving in the right direction as far as professional development,” Adams said, adding, “It is a confidence builder.”

And Brownhill has that treasured yellow brick in his office to remind him of that fact, along with his official FBI portrait, an FBI plaque and an assortment of FBI National Academy Program graduation photos.