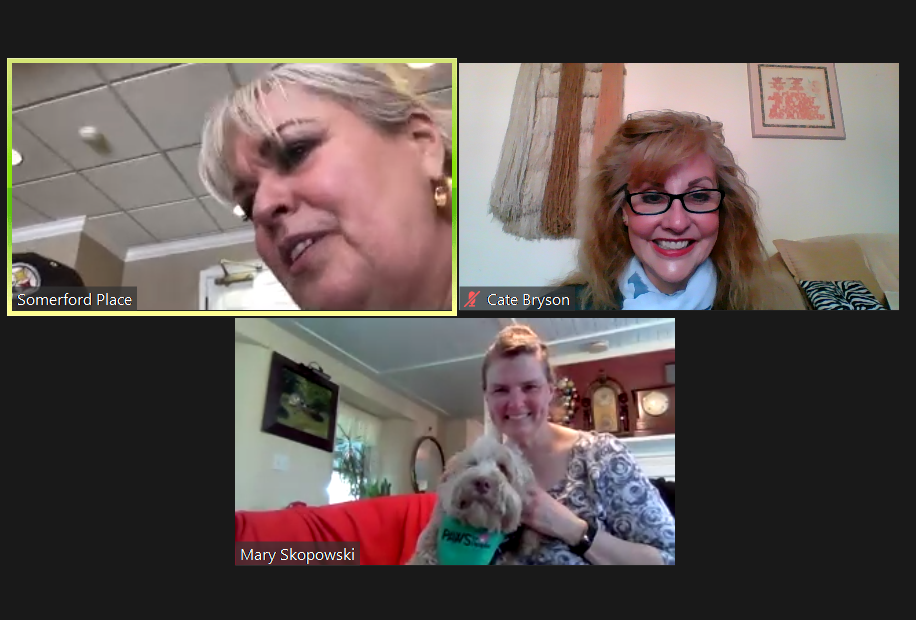 Mary Skopowski and her dog do a virtual pet therapy session with Somerford House nursing home. 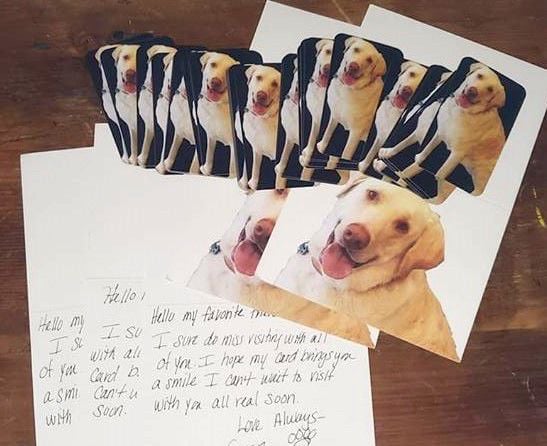 PAWS for People pet therapy teams are using photos and letters to interact with their usual clients.

Mary Skopowski and her dog do a virtual pet therapy session with Somerford House nursing home.

PAWS for People pet therapy teams are using photos and letters to interact with their usual clients.

For PAWS for People, pet therapy is all about building a personal connection. When a PAWS team visits someone – whether it’s a shy kindergartener, a lonely nursing home resident or a hospital patient in need of a distraction – the goal is to brighten the person’s day with a few minutes of interacting with a dog and its owner.

Therefore, when the pandemic hit Delaware in March, closing schools and businesses and making visits to hospitals and nursing homes unsafe, it brought the Newark-based organization and its nearly 600 pet therapy teams to a grinding halt.

Gradually, though, PAWS started thinking about how it could adapt to the new normal.

“We’ve become very visual,” founder and executive director Lynne Robinson said, explaining that PAWS is now aiming to spread joy by sending photos and videos of its dogs and by conducting virtual therapy sessions over Zoom.

“There’s nothing better than hugging a puppy,” Robinson said. “But if you can’t have that, the research proves that seeing a dog, watching a dog, thinking about a dog is also therapeutic. It also releases those endorphins. Oxytocin goes up, the cortisol goes down, and people feel better. They feel more grounded, they feel more happy. They smile.”

It started casually, with a few of the volunteers sending photos and video of their dogs to the people they routinely visit. One woman even hired a production company to film a 15-minute video of her dog doing dance routines, Robinson said.

For the libraries and schools where PAWS teams would visit to allow kids to practice their reading skills by reading to a dog, that now happens virtually. Other clients enjoy watching via livestream as the dogs do tricks or run around. At one nursing home, a staff member walks around with an iPad, allowing residents to interact with the therapy team.

“The lady can say, ‘Oh, would you give him a treat for me’ or ‘Give him a kiss,’ or that kind of thing,” Robinson said.

Even Vaughn Correctional Center, where Robinson and her dogs routinely visit, has allowed some of the prisoners to do therapy sessions over videochat.

“We visited with four or five gentlemen, and it was very interesting,” Robinson said. “They were interactive, they talked to the dog, they laughed and smiled. And every one of them said, ‘This makes it feel like home. I really missed the dogs being here.’”

PAWS hopes to begin limited in-person visits by July 1, though certain places, like hospitals and nursing homes will still be off-limits.

“The irony in this is the people who need us the most, we can’t visit,” Robinson said.

She added that PAWS has gotten requests for virtual pet therapy from as far away as California. The group limits its in-person visits to Delaware and parts of Maryland, Pennsylvania and New Jersey.

“It’s really opened up a lot of possibilities,” Robinson said.