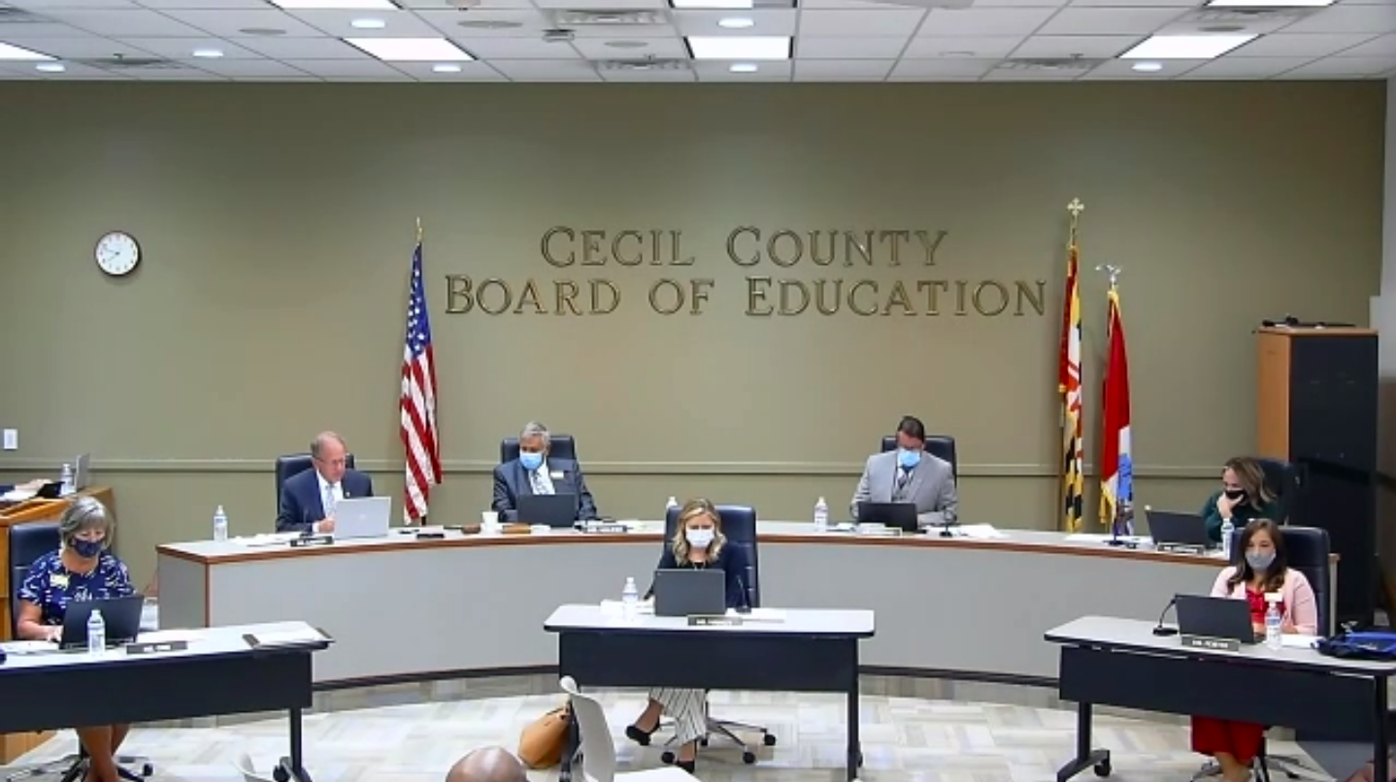 The Cecil County Public Schools Board of Education discussed plans for reopening safely at a Wednesday meeting. 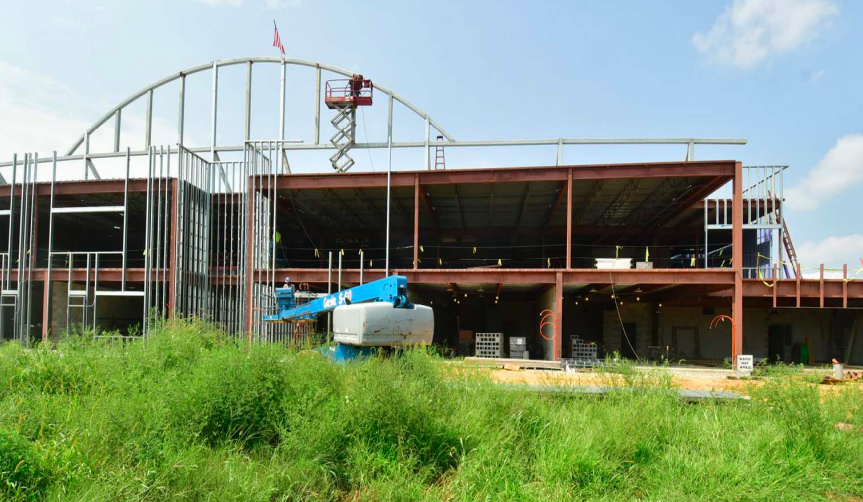 Construction is continuing on schedule at the Chesapeake City Elementary School replacement project. 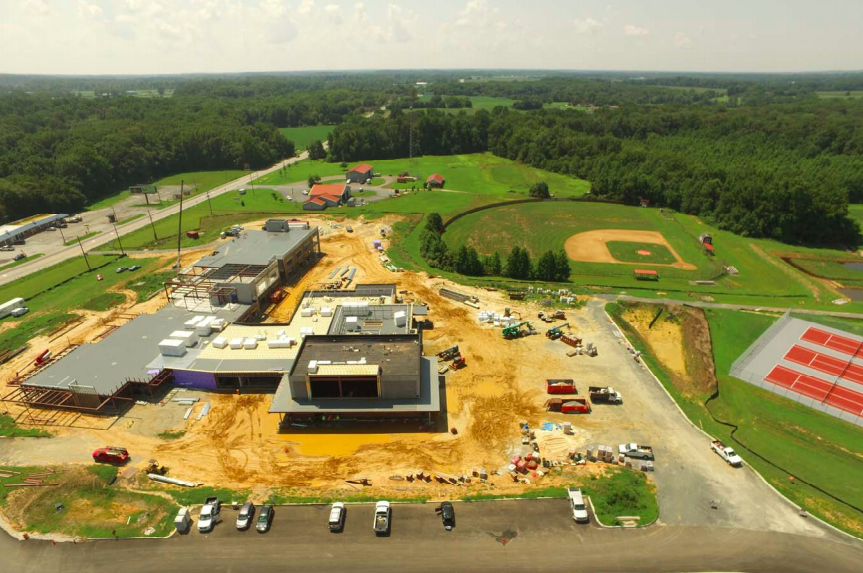 The Chesapeake City Elementary school project is in its final year of funding, with outstanding construction to be completed on the roof and outer walls.

The Cecil County Public Schools Board of Education discussed plans for reopening safely at a Wednesday meeting.

Construction is continuing on schedule at the Chesapeake City Elementary School replacement project.

The Chesapeake City Elementary school project is in its final year of funding, with outstanding construction to be completed on the roof and outer walls.

ELKTON — On the first day of school, Cecil County Public Schools (CCPS) had almost 11,000 users logged in to its online learning platform at one time with no major technical glitches, according to Associate Superintendent Carolyn Teigland.

While school administrators touted the successes of remote learning as the semester gets underway amid the COVID-19 pandemic, board members made it clear that they want to get students back into in-person classes as soon as possible.

“I feel like I’m tech savvy, but more times than not I’m calling my teenager into the room to help me, so my heart goes out to these families that are just so lost,” said Christie Stephens, a board member and mom of four representing Rising Sun. “I’m going to place a priority as a board member on making sure our littlest get the human interaction that they so desperately need.”

Board President William Malesh commended the district for working to meet the state’s guidelines for reopening safely.

“We know these are tough times, but we are head and shoulders above a lot of what’s happening around the state,” he said. “We’re working on it. We would like to get everything back to normal as fast as we can.”

Under the district’s current reopening plan, students most in need of in-person instruction, such as those with special needs, language barriers or other circumstances making virtual learning more challenging, returned to schools this week. The number of students back in the classroom, currently just five percent, could rise to 25 or even 50 percent in October, a decision which will be based on state and local health indicators.

Teigland said the hybrid plan is as aggressive as the district can make it. However, a number of parents and grandparents who participated in the meeting’s public comment section were unsatisfied with the district’s reopening plan.

Erica McDaniels, a North East mother of five, said her eighth grade son was not eligible to return to schools this week despite having ADHD, which makes it difficult to focus, and epilepsy, which gives him seizures after too much screen time.

“I cannot give my children the education they deserve,” she said. “My son had a seizure yesterday while sitting in front of his computer. This is not okay.”

Another mother, Alyssa Rosie, said her first grade daughter struggles to get the teacher’s attention, frequently gets put on mute and rarely gets a response from Zoom’s ‘raise hand’ function.

“We just walked off of school for the day,” she said. “It’s not the teacher’s fault. This just isn’t working.”

Teigland said that administrators have seen a concerning number of families pull their students out of district schools, and local private schools have reported upticks in enrollment interest. She encouraged families to give CCPS a try.

She explained that a number of policies have been adapted to accommodate the range of difficulties facing returning families. Attendance is now counted in a rolling 48-hour period, so if students are unable to log in during the day but complete their work in the evenings, they will not be marked absent. Schools have modified test retake policies to ease grading concerns.

Administrators encouraged parents to reach out to their schools if they have unique circumstances that need to be worked out, saying they are using grace at this time.

“We do really think that what we’re offering is fantastic. It’s really great content. The teachers are doing an excellent job. They’re working very hard to really engage with our students,” she said. “We’re really hoping to show that we can provide what you need, so stick with us.”

COVID-19’s further effects on the district

COVID-19 was top of mind throughout the meeting.

Even in reporting out recipients of the district’s Business & Education Partnership Advisory Council (BEPAC) Classroom Partnership Grants, BEPAC Coordinator Kelly Keeton acknowledged that COVID-19 interrupted the process of selecting and administering the grants. BEPAC awarded $21,000 to schools throughout the district for lab equipment, studio drawing tablets, new clubs and a number of other initiatives.

Malesh opened a discussion of the district’s $207 million 2021 budget with a warning that the effects of economic slowdown would be felt sooner rather than later.

“Budgets are going to be in crisis this year,” he said. “We’re going to have to continue to work with the state of Maryland because their income is low. They already notified us that cuts are coming for this year, not future years.”

During an update on the district’s $7.1 million Chesapeake City Elementary School replacement project, which is in the last year of funding and on track to be completed on schedule, administrators joked about the prospects of teachers continuing remote learning from the brand new facility if the pandemic gets worse.

While he thanked students, parents and staff for preparing for the phased hybrid reopening process, Lawson emphasized that the conditions of the pandemic could turn on a dime. Plans, he said, would have to be adaptable.

Still, he commended CCPS for taking on the challenge, adding that it would have been easier to simply keep schools closed and prepare for a year of virtual learning.

“Yesterday was the first day, and I believe we were among a handful of counties across the state of Maryland that had students in schools for face-to-face instruction,” Lawson said. “I’m immensely proud of our staff for being able to put that together.”

CORRECTION: A previous version of this article stated that 7,644 out of a total 15,000 students logged into the CCPS online learning platform, but this number did not include elementary school students.