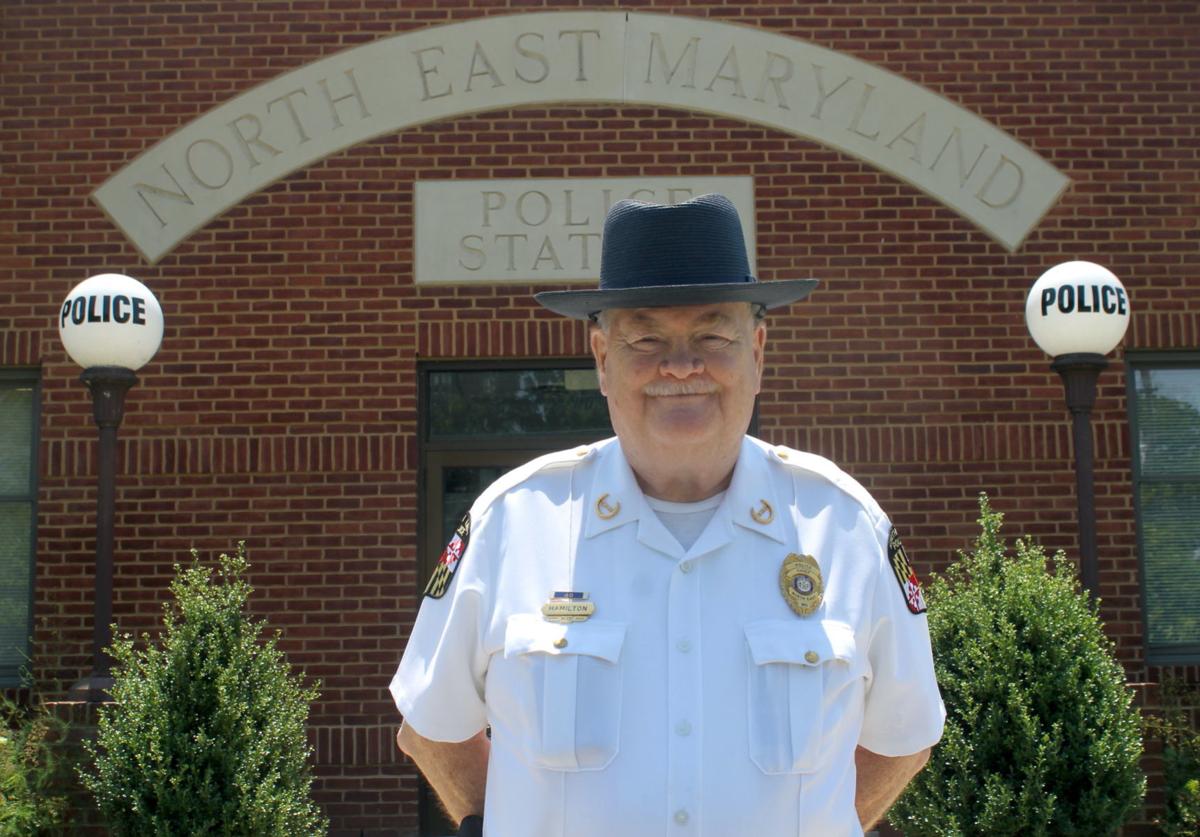 North East Police Department Chief Darrell Hamilton stands in front of his agency’s station earlier this week. He is retiring after 42 years as chief of that department. 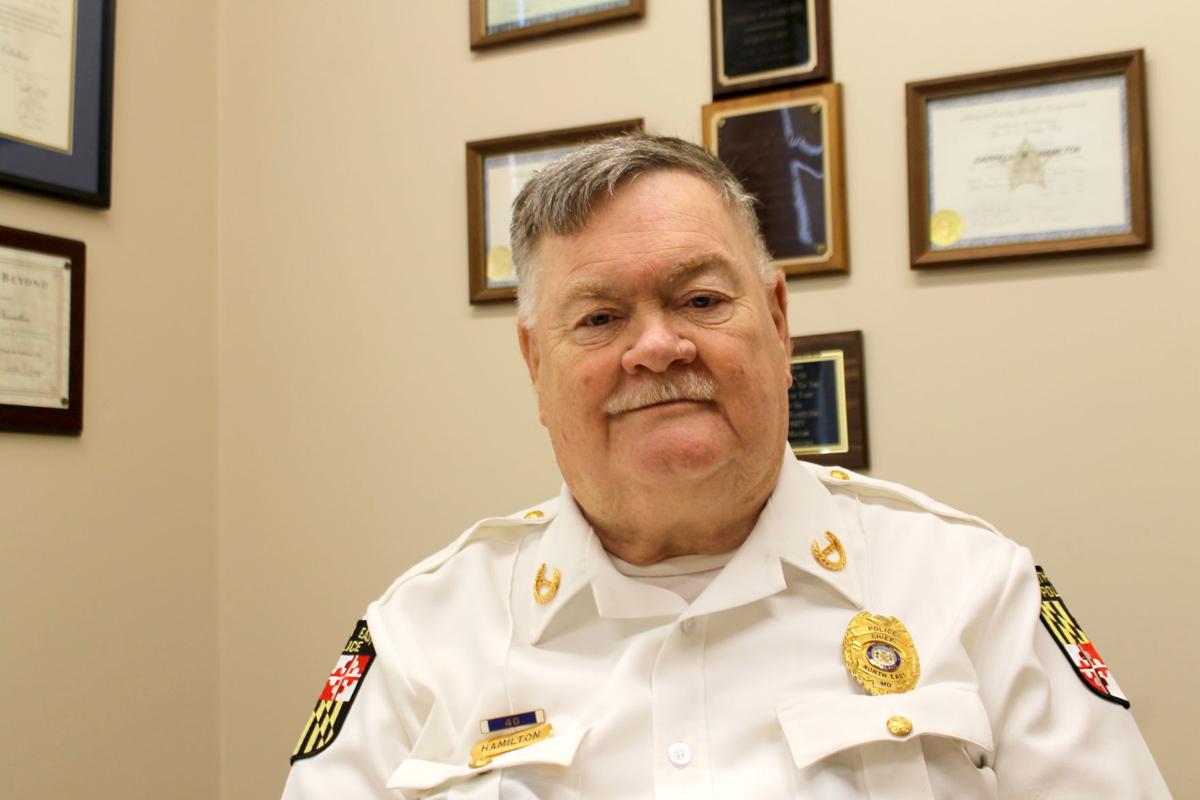 North East Police Department Chief Darrell Hamilton sits behind his desk earlier this week. Hamilton is retiring after 42 years as chief of that agency. 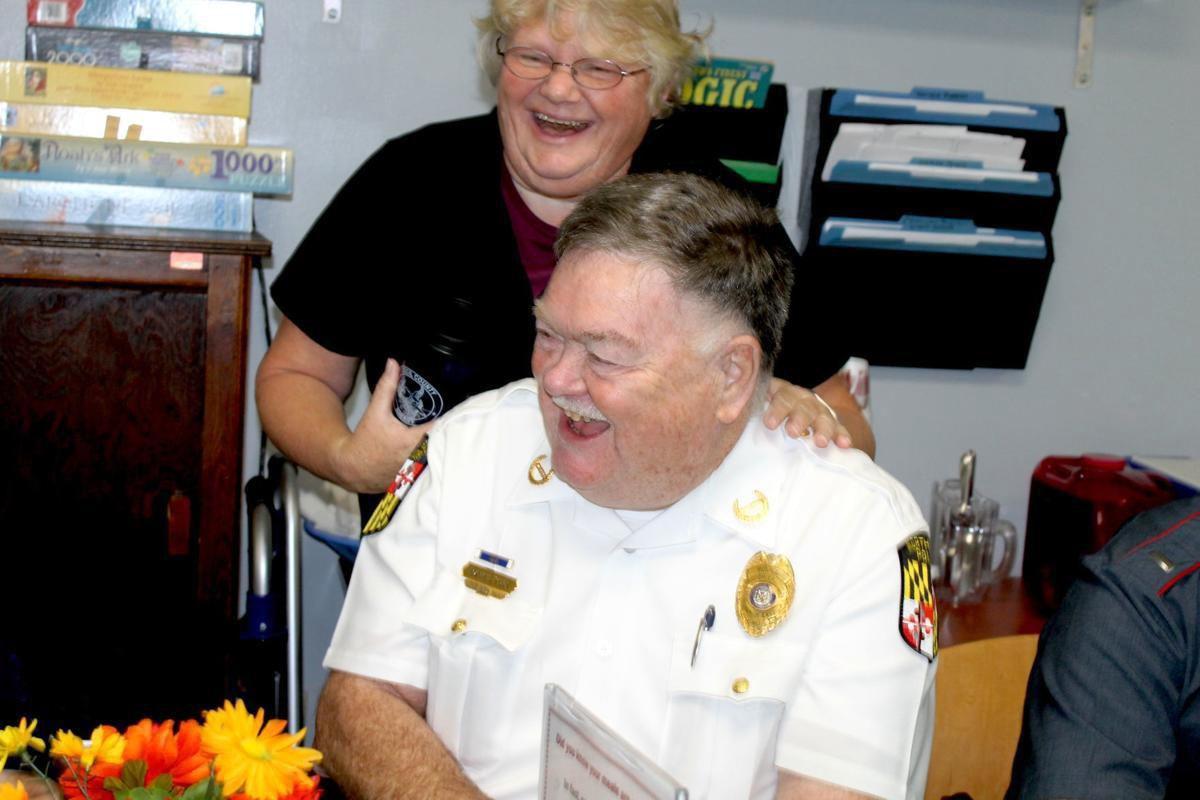 North East Police Department Chief Darrell Hamilton shares a laugh during a Coffee with a Cop event in 2018.

North East Police Department Chief Darrell Hamilton stands in front of his agency’s station earlier this week. He is retiring after 42 years as chief of that department.

North East Police Department Chief Darrell Hamilton sits behind his desk earlier this week. Hamilton is retiring after 42 years as chief of that agency.

North East Police Department Chief Darrell Hamilton shares a laugh during a Coffee with a Cop event in 2018.

NORTH EAST — Darrell Hamilton was a mere 25 years old when he was named Chief of the North East Police Department in March 1978, after spending about four months as a patrol officer with that agency.

On Wednesday, Hamilton 67, will retire after serving 42 years and four months in that leadership position — making him the longest-serving police chief in Maryland history.

Hampered by some recent health issues, Hamilton is leaving his post reluctantly.

“I love this job. I love this department. And I love this town,” Hamilton said, before alluding to medical problems that resulted in him having a couple of recent hospital stays, one lasting six days, and remarking, “I’ve been having more bad days than good days.”

A Cecil County native who was raised in an Elkton-area home, Hamilton found himself on the path to a career in law enforcement not long after graduating from Elkton High School in 1971, when he joined the U.S. Air Force, serving five years as a law enforcement specialist with that military branch before earning his honorable discharge.

It was just something he wanted to try, something that seemed like it would be rewarding.

“I fell in love with law enforcement, just doing the job,” Hamilton told the Cecil Whig. “I knew it was something I wanted to do for the rest of my life.”

Hamilton started working as a NEPD officer in December of 1977, when he graduated from a three-month-long law enforcement academy in Harford County. His official hire date was March 1977, when he started field-training with a patrol officer while waiting for a spot to open in the police academy.

At that time, the NEPD consisted of two patrol officers — including him — and an acting police chief, who left the department in March 1978 to take a job at a tire-manufacturing plant in Perryville.

In swift response, the North East Board of Town Commissioners at that time named Hamilton acting NEPD chief, placing more weight on his five years of law enforcement experience in the Air Force than on the fact that Hamilton still was a rookie in the department. About a month later, the town board appointed Hamilton the NEPD chief.

“I learned everything on the fly,” Hamilton admitted.

He quickly adopted a “community policing” approach, knowing that North East was a small town and realizing that the better he and his officers knew the residents and merchants through frequent interactions with them, the more in tune they would be with their problems and concerns.

“He started community policing before community policing was a big thing, like it is today,” said NEPD Cpl. Bilton Morgan, who joined the NEPD force in 2007, when he retired from the Cecil County Sheriff’s Office after a 20-year career with that agency. “He always wanted to know if something was going on in town and do we need to be part of it. He worried about the town like it was one of his kids. Chief Hamilton was the heart and soul of North East.”

For the first 13 years that Hamilton served as chief, the NEPD station was housed in a room inside a two-story building on Cecil Avenue, across the street from where the NEPD station — built in 1991 — now stands. That old building was the North East Town Hall, which occupied the first floor, save for the one-room NEPD station, and the second-floor was home to the town’s public library.

“It was a four-foot-by-four-foot room, with a little desk and a two-drawer filing cabinet and a phone. That was it,” Hamilton chuckled.

Back then, before cell phones, computers and other technology, police radioes were mounted inside the patrol cars.

“There were no portable radioes. If you had to get out of your vehicle, you had to call for backup,” Hamilton said.

He noted that Maryland State Police troopers often supplemented NEPD patrols. Because NEPD consisted of two or three officers, who worked long stretches, shifts ended at 3 a.m. and there was a few-hour gap before the next officer started his duty.

Also in those early days, there were two Main Street bars that kept NEPD officers busy, particularly on Friday and Saturday nights. “The majority of our calls were breaking up bar fights,” Hamilton said.

Along with all of the other changes that occurred in the years that followed, including computerization, portable police radioes and so forth, those problematic bars changed ownership and are now two popular restaurants — Steak & Main and Woody’s Crab House.

Those are just two of several beloved dining establishments on Main Street, which also is home to gift shops, antique stores and such — all perfect attractions in a tourist town near the Northeast River.

“There have been a number of (town) administrations that have made this town move forward,” Hamilton commented.

Morgan assessed, “He’s a big reason we have these high-class restaurants and businesses in town, because the policies and procedures he put in place to keep crime down made North East a desirable place. He evolved as the town evolved, and the town evolved as he evolved. He has always worked closely with the town officials.”

The Town of North East has approximately 3,800 residents. Today, the NEPD is comprised of 10 officers, including the chief.

Hamilton is well-respected among his officers and others who worked closely with him.

“He made being a police officer easy. It wasn’t like a chief telling you what to do, but it was more like a father giving you fatherly advice, fatherly guidance,” said Det. Sgt. Stephen Yates, a 16-year NEPD veteran.

“The chief is a consummate professional. He was like a father-figure who led by example,” Hickey said, adding, “He had no problem telling you when you messed up, but he also was quick to give you an ‘Attaboy.’ He was very even-keeled and, because of that, nobody every got too fired up and nobody ever got too lax. He has the perfect temperament.”

Sheriff Scott Adams marveled over Hamilton, as a professional and as a person.

“To serve as a police chief for such a long period — the longest in Maryland history and I’m not sure for the rest of the United States — is a remarkable achievement. But aside from that, Darrell is just a great human being. He has outstanding integrity. When you get to the end of your career, that’s what you hope people will say about you. I can definitely say that about Darrell; he’s just a great human being.”

Adams told the Cecil Whig that he made a point to keep in touch with Hamilton over the years.

“At all levels of my career, I would stop by in the North East Police Department and talk to Darrell and not always about work, just about anything under the sun. He is a good person and when you needed it, he could cheer you up,” Adams said.

When asked for his thoughts about Hamilton, North East Mayor Bob McKnight, who has served at that position for 27 years, paused before qualifying, “I could say pages and pages and pages of wonderful things about Chief Hamilton.”

Then he commented, “Darrell is an amazing person. He’s the heartbeat of this town. It has been a privilege and honor working with him.”