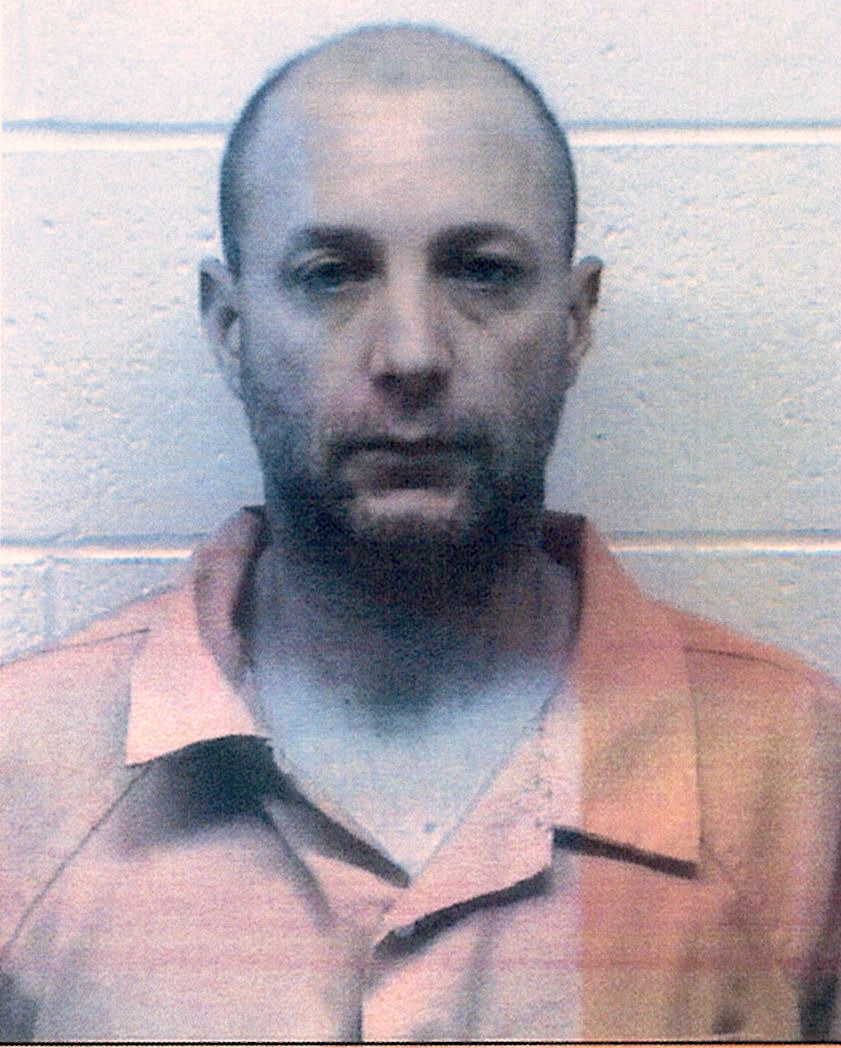 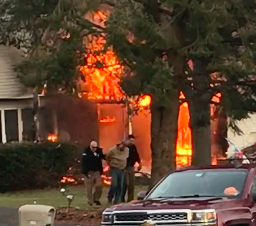 As flames devour this Elkton-area home on Jan. 3, 2018, law enforcement officers escort a handcuffed Brandon Michael Reynolds, then 42, away from the property after arresting him. A judge imposed a 10-year prison term on Reynolds on Wednesday, after the defendant pleaded guilty to first-degree arson and first-degree assault. 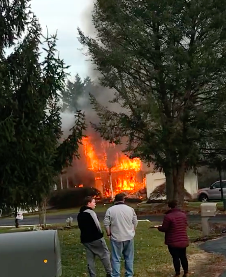 Neighbors watch the raging fire on Jan. 3, 2018, after Brandon Michael Reynolds, then 42, torched the Elkton-area home. A judge imposed a 10-year prison term on Reynolds on Wednesday, after the defendant pleaded guilty to first-degree arson and first-degree assault. 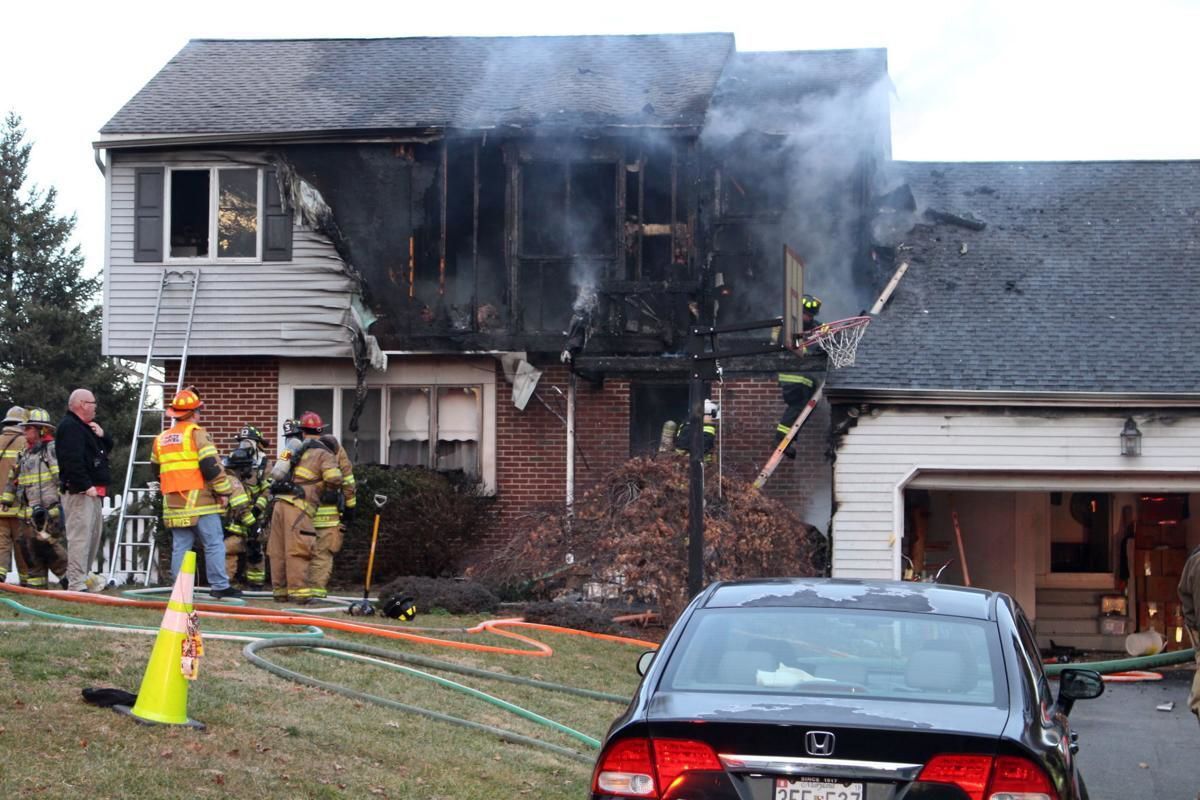 Firefighters continue to work on Jan. 3, 2018, after controlling an intentionally-set blaze that gutted this Elkton-area home. On Wednesday, a judge imposed a 10-year prison term on the man who torched the home, Brandon Michael Reynolds, 43, after he pleaded guilty to first-degree arson and first-degree assault.

As flames devour this Elkton-area home on Jan. 3, 2018, law enforcement officers escort a handcuffed Brandon Michael Reynolds, then 42, away from the property after arresting him. A judge imposed a 10-year prison term on Reynolds on Wednesday, after the defendant pleaded guilty to first-degree arson and first-degree assault.

Neighbors watch the raging fire on Jan. 3, 2018, after Brandon Michael Reynolds, then 42, torched the Elkton-area home. A judge imposed a 10-year prison term on Reynolds on Wednesday, after the defendant pleaded guilty to first-degree arson and first-degree assault.

Firefighters continue to work on Jan. 3, 2018, after controlling an intentionally-set blaze that gutted this Elkton-area home. On Wednesday, a judge imposed a 10-year prison term on the man who torched the home, Brandon Michael Reynolds, 43, after he pleaded guilty to first-degree arson and first-degree assault.

ELKTON — A man who burned down a relative’s home near Elkton in January 2018 while in a delusional state of mind caused by his methamphetamine use received a 10-year prison term on Wednesday.

The judge ordered Reynolds to serve five years of supervised probation after completing his 10-year term in a Maryland Department of Corrections prison. Reynolds must submit to a drug evaluation and treatment and counseling as one of his probation conditions.

In addition, Davis ordered Reynolds to pay $24,970 in restitution to the victims for the belongings that they lost in the intentionally-set blaze. (The defense reported Wednesday that insurance covered the loss of the home.)

As part of a plea deal in February, Reynolds pleaded guilty to those two felony charges, which combined are punishable by up to 55 years in prison. Prosecutors agreed to dismiss seven related charges against Reynolds — including attempted first-degree murder, attempted second-degree murder and attempted home invasion – in exchange for his guilty pleas.

Reynolds’ defense lawyer, Ellis Rollins III, told the judge Wednesday that his client was “under the influence of crack (cocaine) and meth” at approximately 4 p.m. on Jan. 3, 2018, when he set fire at 159 Silchester Drive — a home where the grandfather of his son resided. That residence is located in the Surrey Ridge development off of Route 213 (Singerly Road), north of Elkton.

“He was delusional. This was his son’s grandfather. He believed the grandfather harmed his son in some fashion,” Rollins said, stressing that Reynolds’ perception and judgment had been clouded by his drug use and that there was no validity to the suspicions on which his client acted.

Speaking to the judge on behalf of Reynolds during Wednesday’s proceeding, his mother, girlfriend and employer all expressed shock that he had committed the crimes.

They blamed Reynolds’ drug addiction for his actions on Jan. 3, 2018, maintaining that such criminal acts belie who he is as a sober person — a good, peaceful, respectful, hard-working man.

“I’ve known him since birth. I don’t know who did this burning, but it’s not the Brandon I know,” his employer told the judge, reporting that Reynolds “still has his job” when he is able to work again.

Reynolds expressed contrition while addressing the judge moments before sentencing.

“There is no excuse for what I did, and I want them (the victims) to know how sorry I am,” Reynolds said, seconds after he glanced back at his mother, girlfriend and employer seated in the courtroom pews and commented, “I am sorry for the pain and trouble I caused you. Thank you for your support. I love each and every one of you.”

According to Maryland State Police and court records, the incident leading to Reynolds’ arrest and the criminal charges against him started when he arrived at 159 Silchester Drive about 3:50 p.m. on Jan. 3, 2019.

Reynolds, whom investigators believed was brandishing a knife, assaulted the grandfather during an argument there, police said. Shortly thereafter, the victim detected smoke and noticed that the front of the house was engulfed in flames, police added.

Also present in the home at the time of the attack was Reynolds’ son, police said, adding that Reynolds did not know that his son was in the home before lighting the fire.

Everyone was able to safely escape the burning home, according to police.

Shortly after arriving at the scene, MSP troopers and Cecil County Sheriff’s Office deputies arrested Reynolds, police said. Investigators believed that Reynolds planned the assault and that he was under the influence of drugs at the time of the incident, police added.

According to charging documents, Reynolds confessed to investigators that he had used methamphetamine on the day before the attack.

Reynolds attempted to mislead investigators, telling them that he walked to the home from Elkton and that the fire was started accidentally when a lit cigarette fell on a straw welcome mat, police reported.

But in a later interview, according to court records, Reynolds admitted that he drove to the home and poured gasoline on the front porch — accidentally lighting the gas can on fire and, consequently, thwarting his plan to also set fire at the rear of the home.

Instead, Reynolds ran to the back of the home and confronted the grandfather with a knife, in an attempt to keep him inside the burning home, court records show.

Rollins, on the other hand, asked the judge to fashion a sentence that would allow Reynolds to serve his time in the Cecil County Detention Center, which incarcerates inmates who are serving terms that are 18 months or less.

The defense lawyer reported that sentencing guidelines relating specifically to his client’s first-degree arson conviction set a penalty range of three to 10 years.

Moreover, he noted that Reynolds already had served 18 months as a pre-trial inmate since his January 2018 arrest and that the judge had given his client credit for that time of incarceration. Rollins requested a sentence at the bottom of those sentencing guidelines relating to Reynolds’ first-degree arson conviction.

In pushing for that three-year sentence, Rollins argued that his client’s two convictions stem from the same incident. “This was one integral event. It is not two separate crimes,” Rollins opined to the judge.

Davis, however, decided that Reynolds should serve much more than three years.

While explaining the reasons for the 10-year prison term that he imposed on Reynolds, Davis acknowledged from the bench that Reynolds was impaired by drugs at the time of the Jan. 3, 2018 incident and that they drove his actions.

But, nevertheless, Reynolds still is responsible for setting a “raging fire,” according to Davis, who asserted from the bench that Reynolds intended to cause serious harm when he did so.

“You wanted to burn them out and kill them,” Davis told Reynolds, reminding the defendant that he set a fire at the front of the home, near an exit, and that he also had a plan, which was thwarted, to start another blaze at the back of the house.

Davis said he considered the “sheer dangerousness” of Reynolds’ actions as one of the factors when determining the sentence he would impose.

Providing context to his comments, Davis estimated that 90 percent of the criminal cases over which he presides are drug-related to various degrees, ranging from “theft to assault to arson and even murder.”

“This one problem (drug abuse) runs the gamut from little too big. To what level did you let that problem impact others?” Davis told Reynolds, before remarking, “You contemplated killing people.”