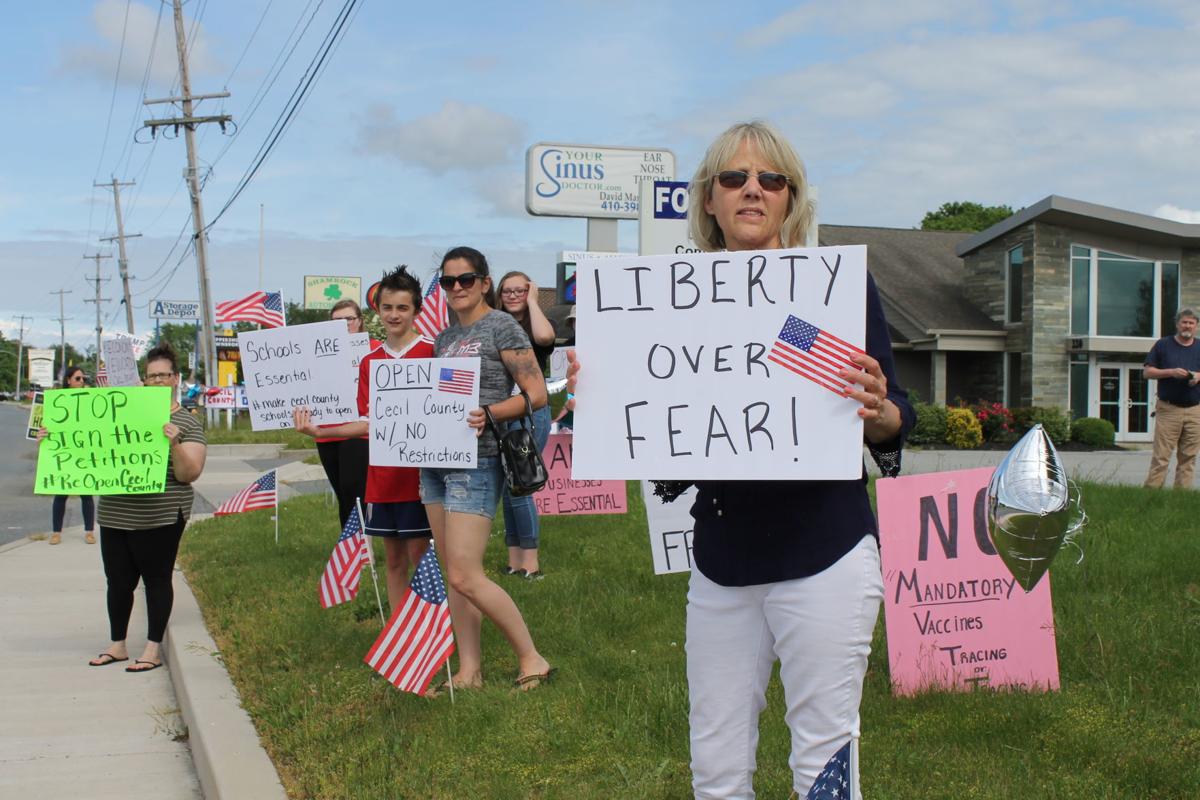 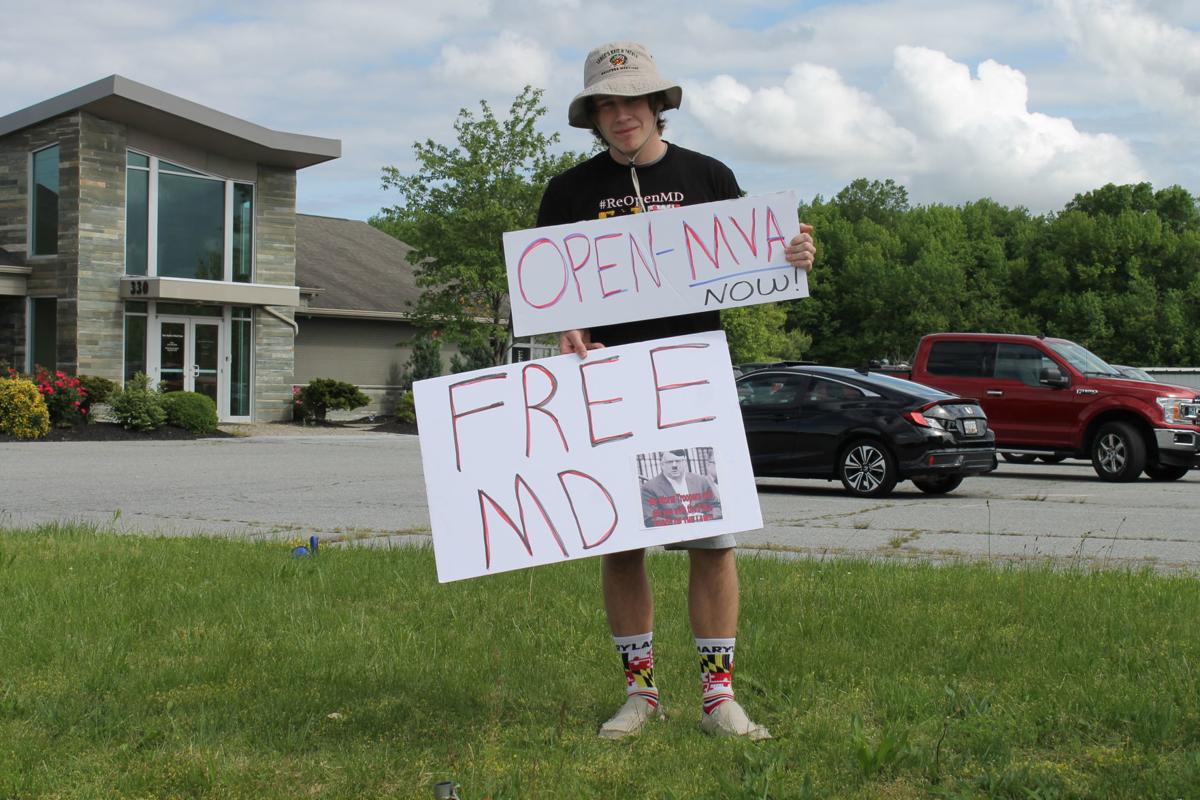 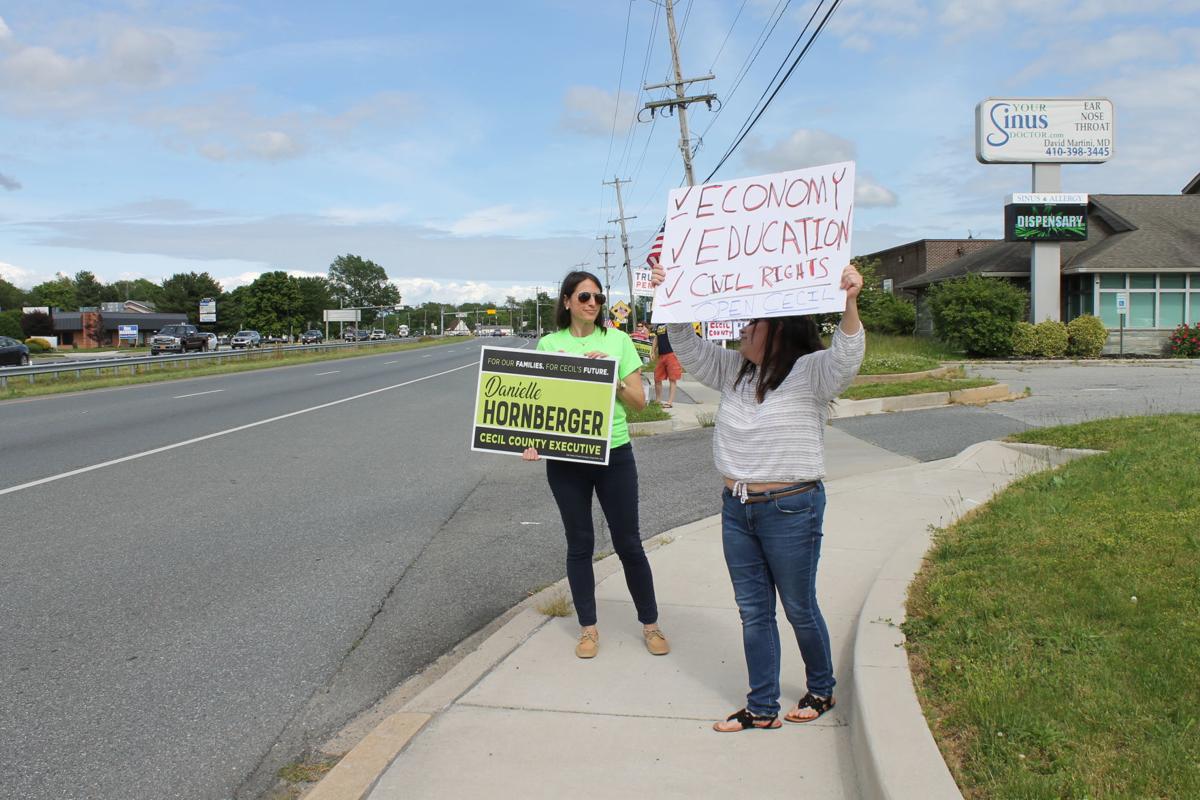 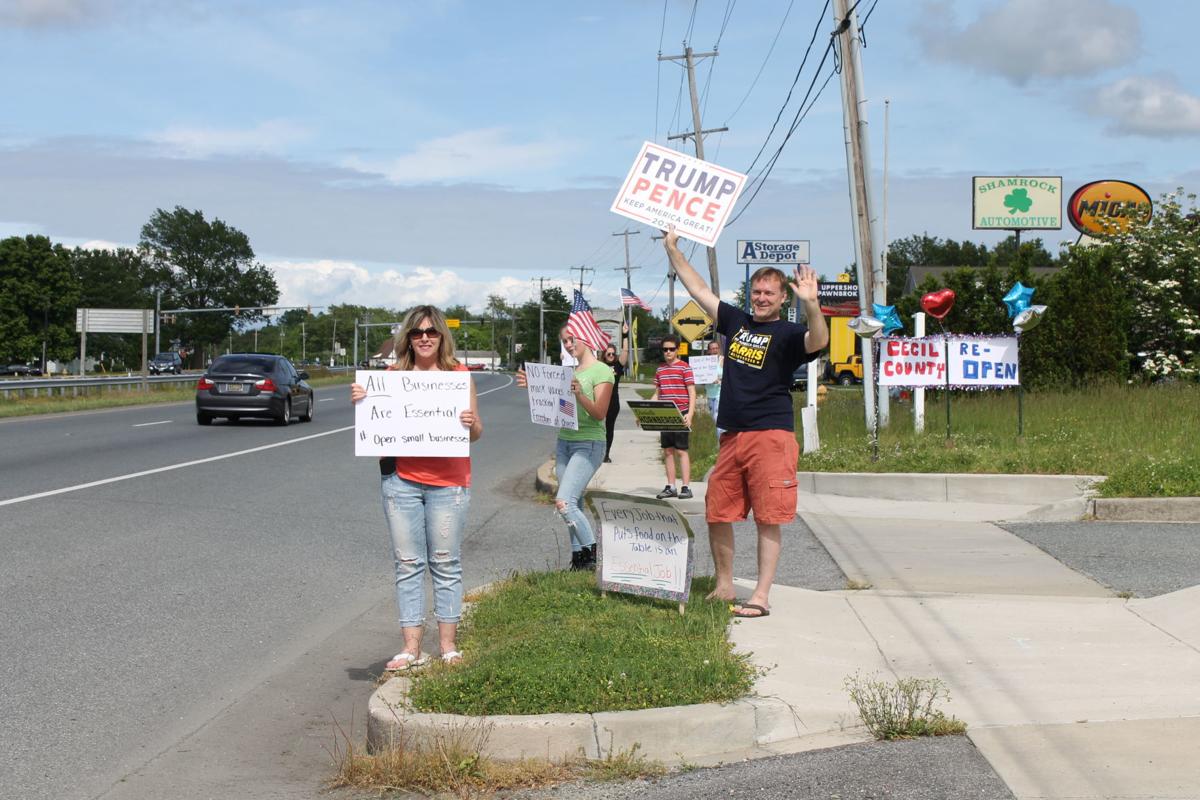 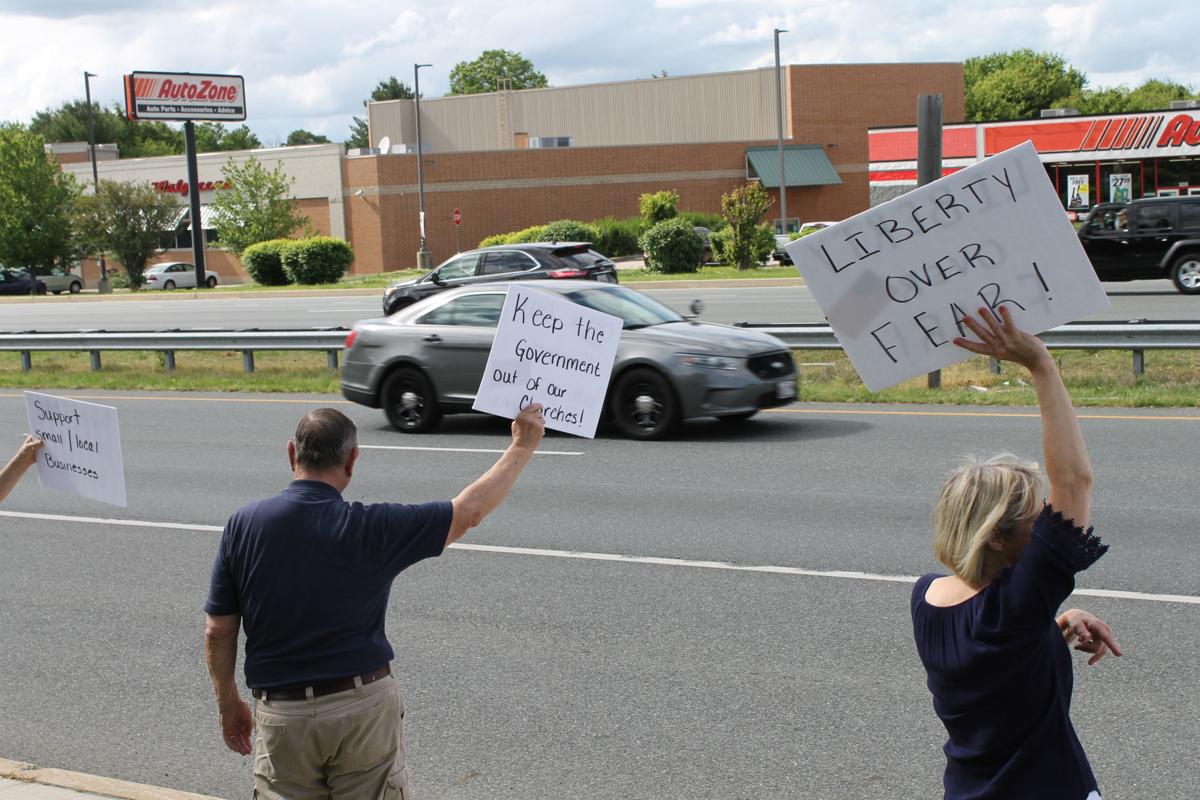 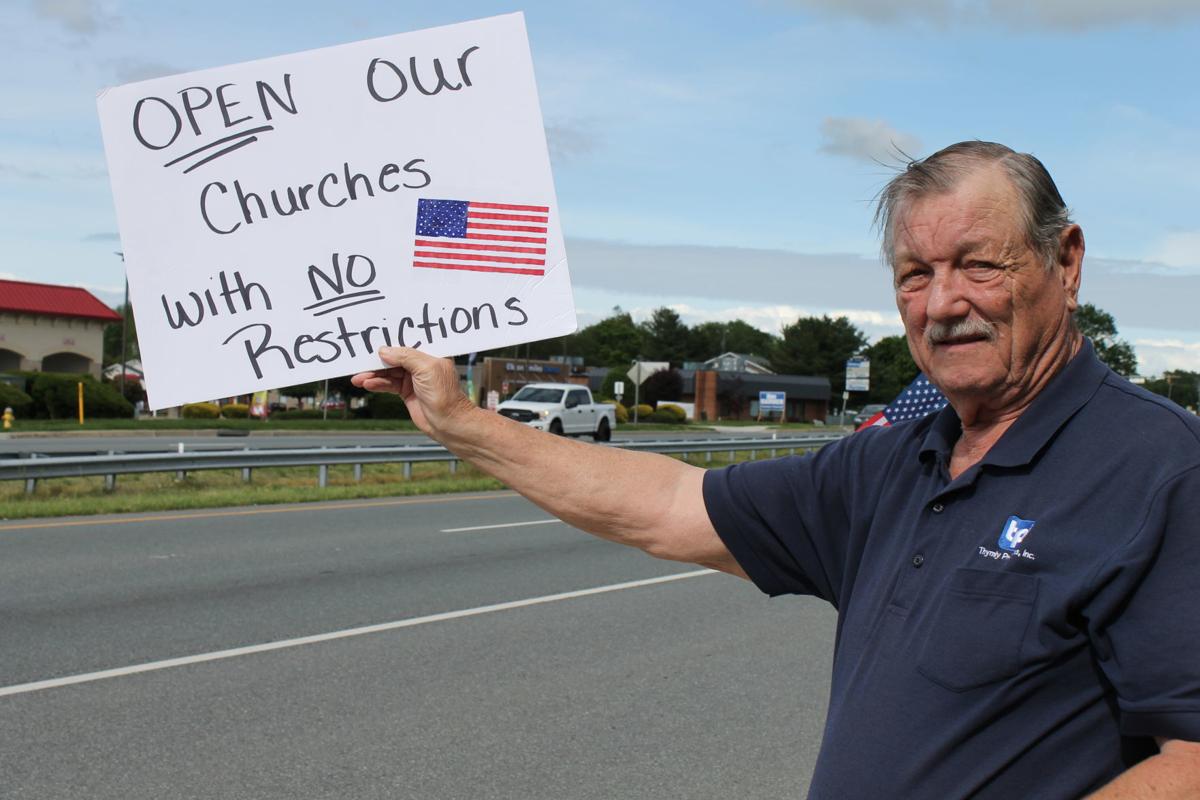 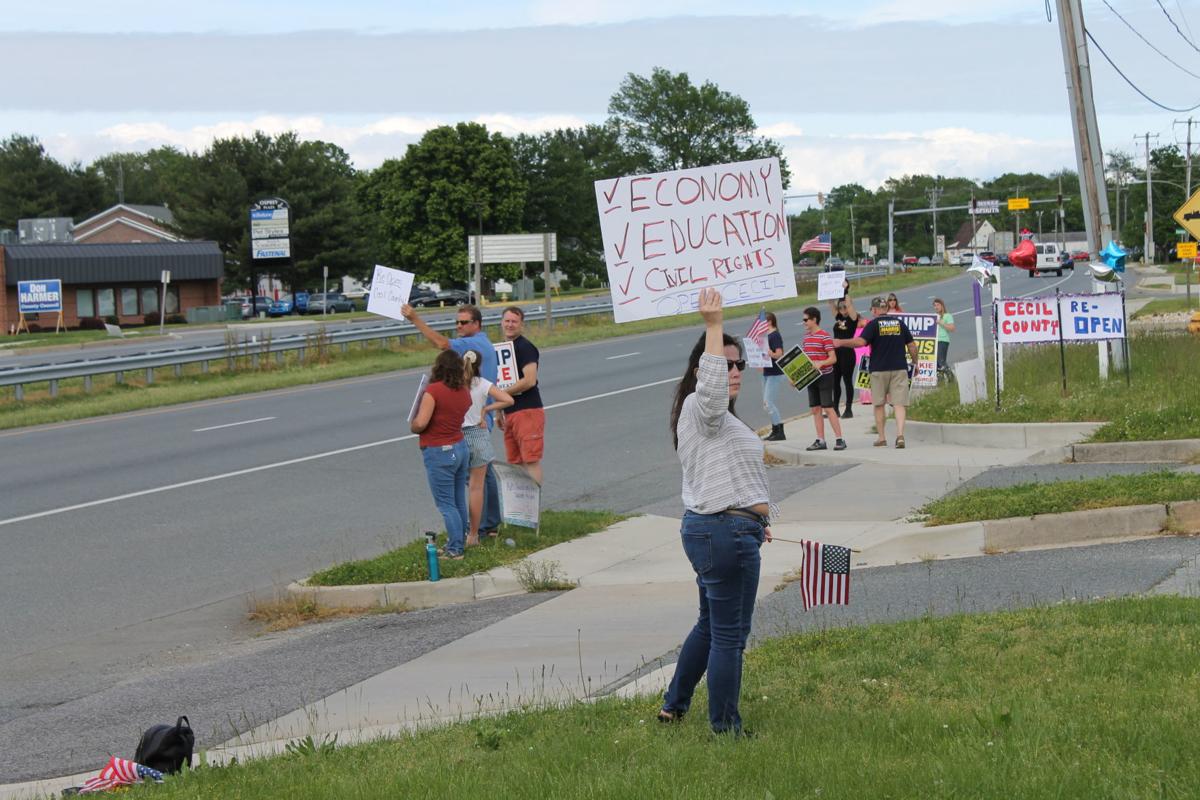 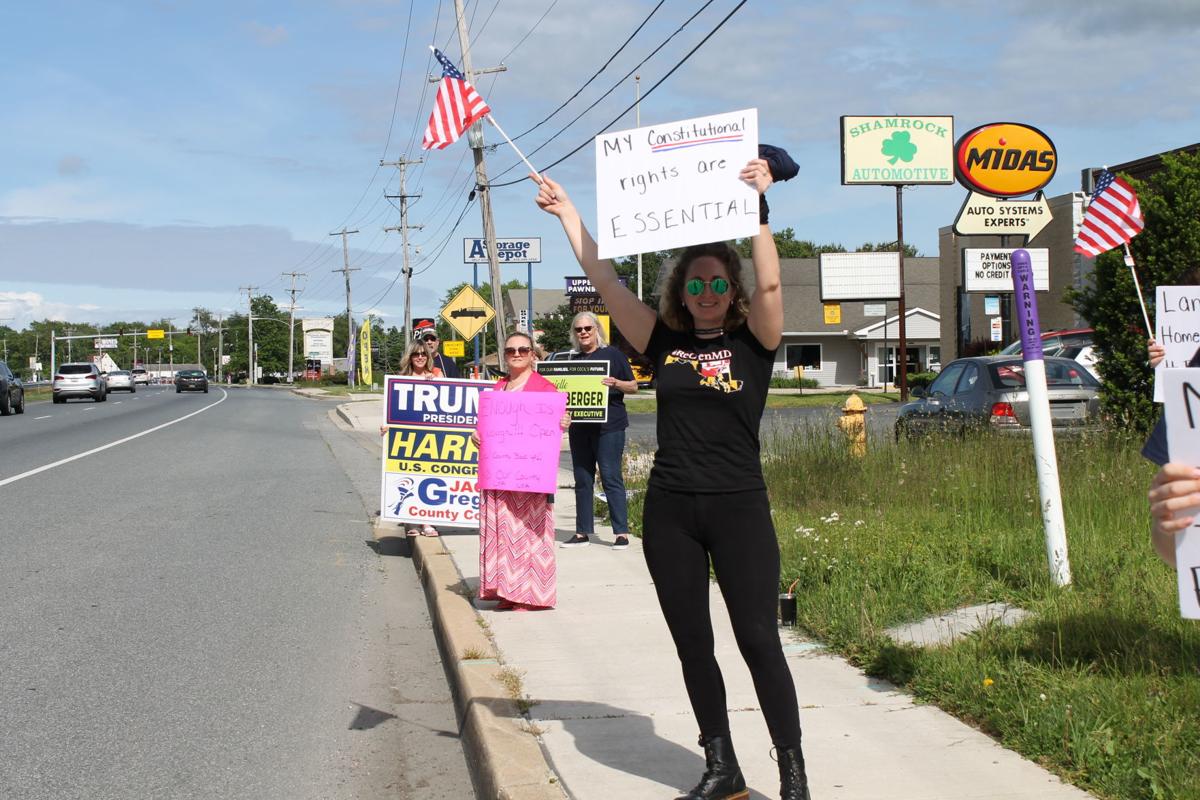 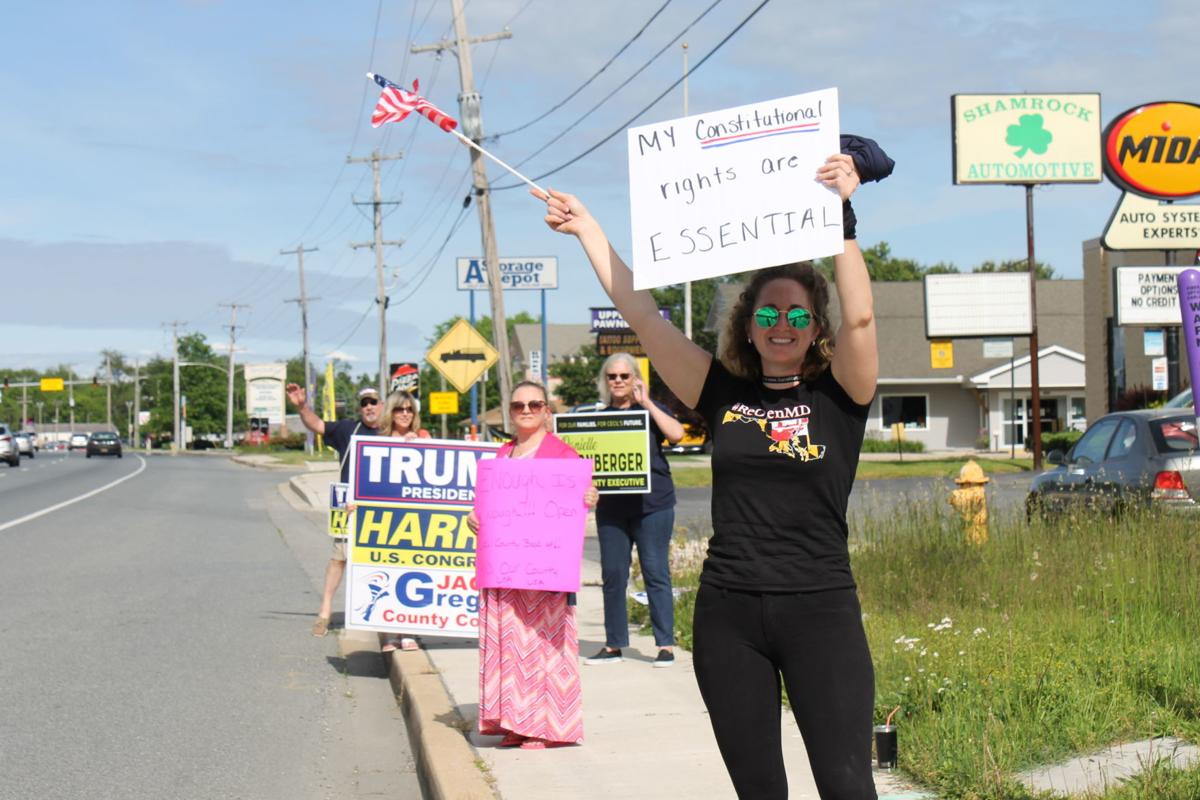 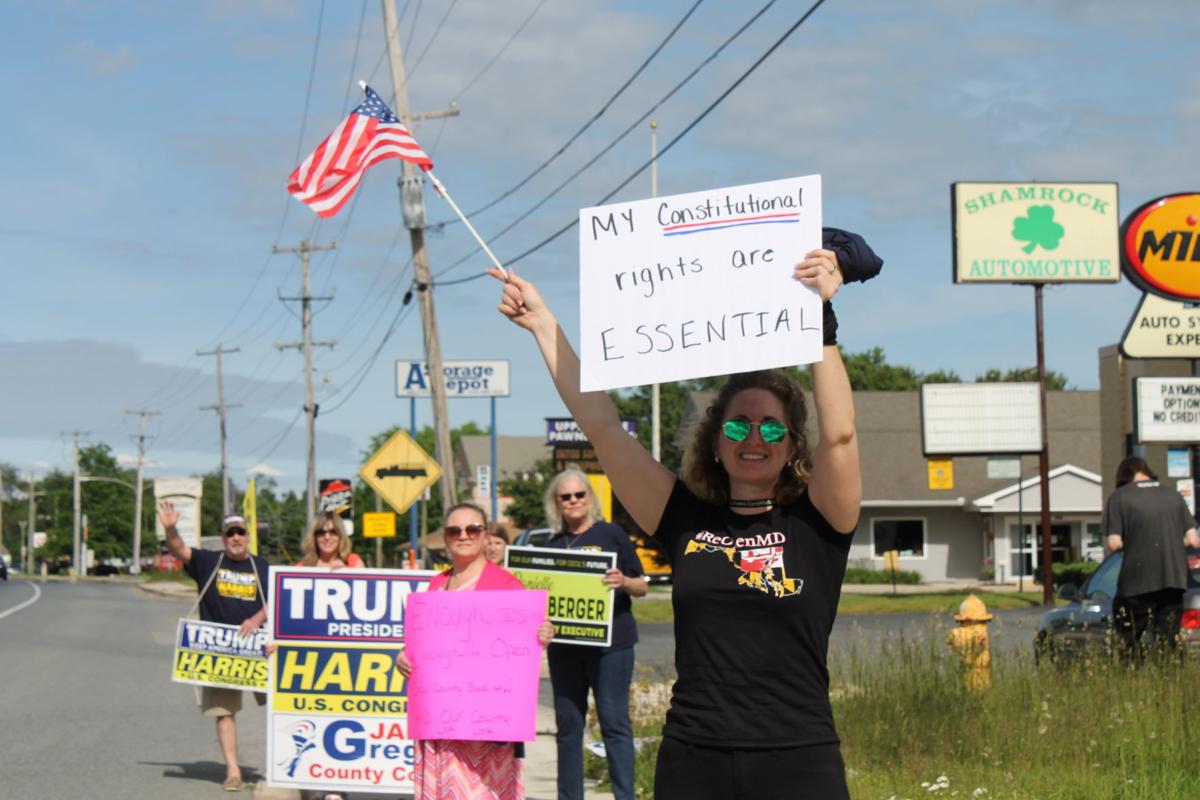 ELKTON — Driving east on Route 40 passersby Wednesday afternoon may have noticed the latest protest calling on Gov. Larry Hogan to reopen the state.

The protest on Pulaski Highway was another installment of the nationwide outcry as citizens grow restless under restrictions to combat the virus.

Not unlike others in the nation, most in Cecil County have felt the impact of coronavirus — by infection, loss of income, altered routine, etc. — but some feel that state government has gone too far in controlling the COVID-19 response.

ReOpen Cecil County, an offshoot of ReOpen Maryland, “is a group aimed at opening our county businesses, churches and schools in a responsible sensible manner. We support protecting our senior and vulnerable community,” as its Facebook page states.

“I’m just to a point where I am fed up,” said Lisa Conely, a ReOpen Cecil County organizer, who said she knows of people who have been trying to get on unemployment for over two months. “[One person] didn’t know where else to turn to and called me.

“Tell me how sad that is,” Conley said.

She, and others on the picket line, wants to keep residents safe, but doesn’t feel the state is being responsible with taxpayer money in alleviating the weight of the virus.

“We all have children and loved ones,” Conley said, “We don’t want them to get sick. We have to open sensibly; we have to open so we can salvage our economy.”

Though many complained of civil rights being violated — an issue that brought Hogan into court — these Cecil County residents seemed more concerned with local affairs; bearing the sight of businesses dying and church doors closed has proven too much.

Dozens of state-shutdown protestors lined the sidewalks of Pulaski Highway as an expression of free speech — one constitutional right they say hasn’t be infringed upon. Several rally participants were asked to describe what civil liberties were being violated, nearly all answered with two words: “small business.”

“We don’t trust our small businesses [to open safely] but Walmart is fine?

“Make it make sense to me,” Conley said, adding that she has written to state lawmakers to no avail.

Some argue that the safety guidelines put in place are not doing enough to stop the virus. For example, there were claims that mask-wearing has only encouraged people to touch their faces more.

Tammy Evans, another ReOpen Cecil County organizer alongside Conley and Mary Shaw, feels the state response to COVID-19 has shifted into a political ploy to gain control. She questioned how the state could find small businesses incapable of following CDC safety guidelines as chain businesses were allowed to remain open.

“The agreement we had was to slow the spread, not contain the spread [of COVID-19],” said Vince Sammons, the chair of the Cecil County Republican Committee, “We did our part. We gave the state adequate time. ...

“We all know there’s going to be deaths out of this,” Sammons added, who believes that articles of COVID-19 have sensationalized the death rate and that recovery hasn’t been a priority in the media. “The state has been given enough time to slow the spread.”

Mostly, though, those behind ReOpen Maryland/ReOpen Cecil County believe citizens deserve a place in the conversation about their futures. “Civil liberties” being the umbrella complaint among protesters, Evans went as far to argue that the state is “taking away my right to choose.”

“What are we going to come out to?” Conley said.

“You love people in your area, and you don’t want to see businesses shut down and people lose their homes,” she added.

Evans is listed on three petitions on change.org to Gov. Hogan, County Executive Alan McCarthy and to the Cecil County Council to reopen all business, end the Contact Tracing Program bill as well as the mask mandate.

The mask petition, in part, reads:

“We The People of Cecil County Demand that the order to wear a face covering or mask be lifted immediately, there has been no specific scientific data that proves or disproves that the face coverings are effective in preventing the spread of COVID19. Due to threats from the government and health department to the businesses, many businesses have issued “no exception” rules for the mask. The government through intimidation has business owners in fear of being shut down, and so it has business owners policing the citizens. The business owners do not have training to police the citizens.”

So far, 17 have signed the small business plea, 14 on the tracing program opposition and nine against the mask mandate.

Due to the coronavirus, schools and nonessential businesses have been ordered closed since early March, which was shortly followed by the Hogan’s executive order to stay at home on March 30.

Wednesday at 5 p.m., in the middle of the Reopen Cecil County rally, Gov. Larry Hogan let out a little more slack for public socializing.