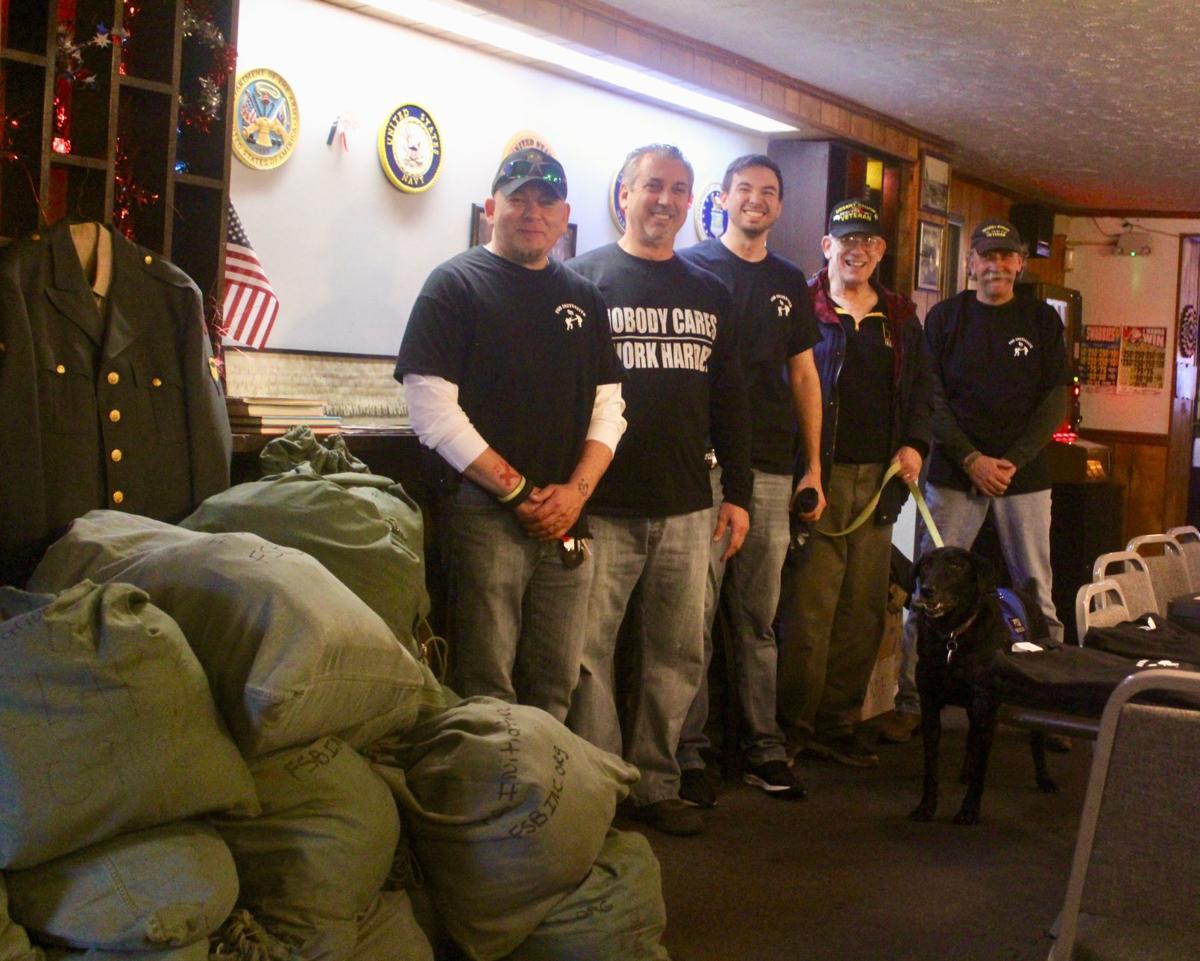 The Cecil County Memorial VFW Post 6027 members teamed up with the Forward Support Base Initiative to hand out 20 bags filled with items for homeless veterans can use to survive the winter. 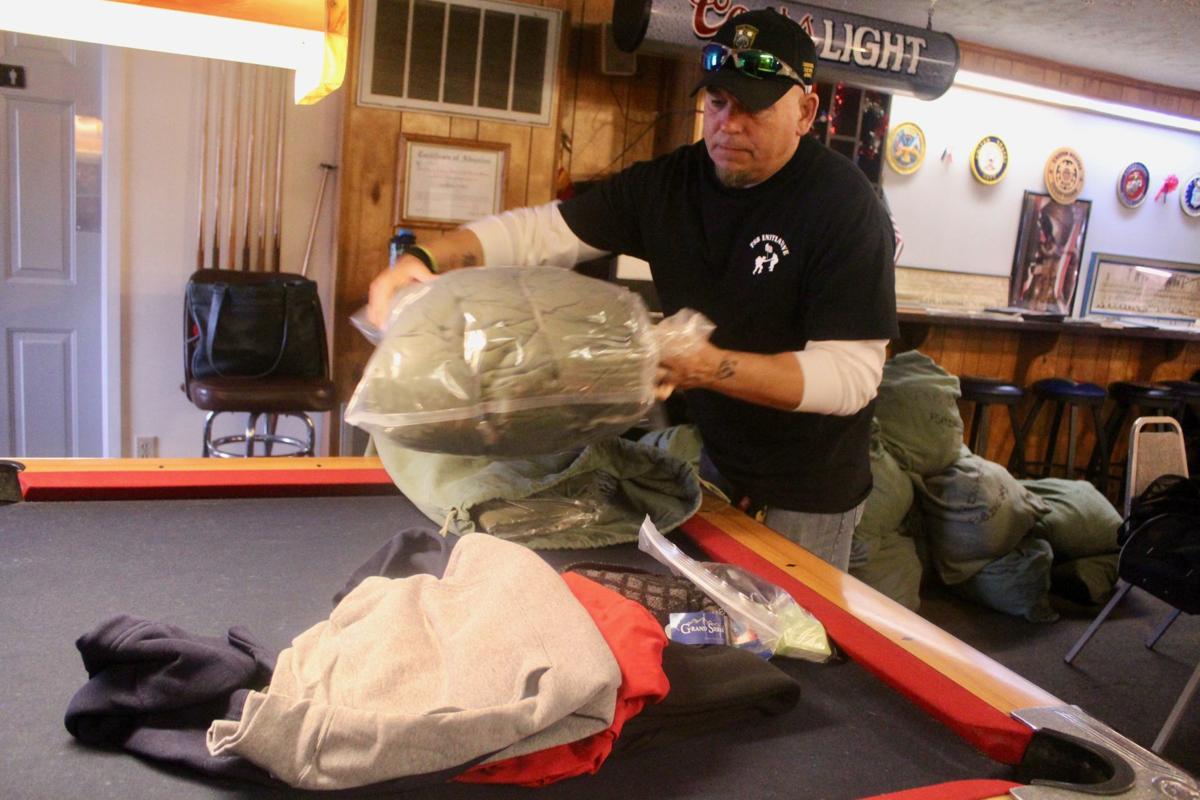 FSB Initiative founder Chaz Kraynak, unpacks a bag to show what each homeless veteran would get during an outreach event at the Cecil County Memorial VFW Post 6027. Each bag had pants, a shirt, a hoodie, socks and hat and gloves as well as a sleeping bag.

The Cecil County Memorial VFW Post 6027 members teamed up with the Forward Support Base Initiative to hand out 20 bags filled with items for homeless veterans can use to survive the winter.

FSB Initiative founder Chaz Kraynak, unpacks a bag to show what each homeless veteran would get during an outreach event at the Cecil County Memorial VFW Post 6027. Each bag had pants, a shirt, a hoodie, socks and hat and gloves as well as a sleeping bag.

NORTH EAST — A change of clothes and some toiletries can be easily packed for some people for a quick overnight trip. But for homeless veterans, those items make a monumental difference when enduring another cold winter day with dignity.

Chaz Kraynak, founder of the Forward Support Base (FSB) Initiative, strives to get those veterans the support they need. That’s why he packed 20 canvas bags with those essentials — and a sleeping bag — and handed them out at an outreach event at the Cecil County Memorial VFW Post 6027 in North East on Saturday.

“All of this was purchased with donations, and unlike some non-profits, 100% of whatever we raise goes into helping the veterans. No one is taking any salary from this,” Kraynak told the Whig.

For four hours, Kraynak camped out at the North East VFW Post on Saturday to hand out bags to veterans in need. By the end of the day, he handed out 18 of the 20 bags.

Although the point of each bag is to provide homeless veterans with items they may need to make it in the winter, there’s something to be said for providing a clean, new shirt to replace one that’s outlived its life.

“Something like a bar of soap can help someone feel better because who doesn’t feel better after a shower,” he said.

Kraynak, who served in the U.S. Army and became homeless himself in 2016, said his goal was to meet veterans at their current situation and get them back on their feet and connected to resources.

He started the FSB Initiative roughly two years ago after he was able to get some help from homeless veteran programs in New Mexico and later, Wilmington, Del. Kraynak said the program in Delaware was not successfully tapping into all the resources available to help out veterans and need, and later on he started to work for the program to improve it within.

But with the FSB Initiative, Kraynak said the program’s mobility can help him travel and meet the homeless veteran community where they are. He’s held outreach events in Delaware and Pennsylvania in the past, and plans on expanding the program eventually to New Jersey.

“I’ll go anywhere where there’s a need,” he said.

U.S. Air Force veteran Tommy Lyons said that the need was still in Cecil County, as he knew plenty of homeless veterans. After he was discharged in 2012, he was one of them.

Lyons able to get the assistance he needed by coming into the U.S. Veterans Center in Elkton. Through them, he was able to connect with programs to help him find housing, help pay for furniture for it, and register for disability benefits.

The hardest part for veterans transitioning back to civilian life, he said, was the shock of leaving a structured world.

“Your life in the military is so streamlined, and everything is done for you,” Lyons added. “When that structure isn’t there, it’s hard to pick up where you left off.”

That’s why when Lyons, a VFW member that was involved with a coat collection, heard about the FSB Initiative, he started to work with Kraynak to host an outreach event.

North East Post Commander Gene Daley said that the VFW was more than willing to host the FSB Initiative because the non-profit reflects the core goals of supporting fellow veterans.

“We want to help our homeless veterans. I hear it’s difficult to reach them, but we keep our eyes and ears open for them so we can reach out,” Daley said. “This is a great opportunity to support and help some of our veterans come in and find out community.”

Lyons said that his hope is that more events and organizations, like the FSB Initiative, will get more boots on the ground and help find veterans in need.

“It’s extremely hard to reach homeless veterans. They might not feel like they can talk about it because they feel like someone behind a desk couldn’t relate,” Lyons said. “That’s why it’s imperative to find them, show them that we’re here and we can help pick them back up.”

For more information about the FSB Initiative, find them on Facebook or visit fsbinc.org.