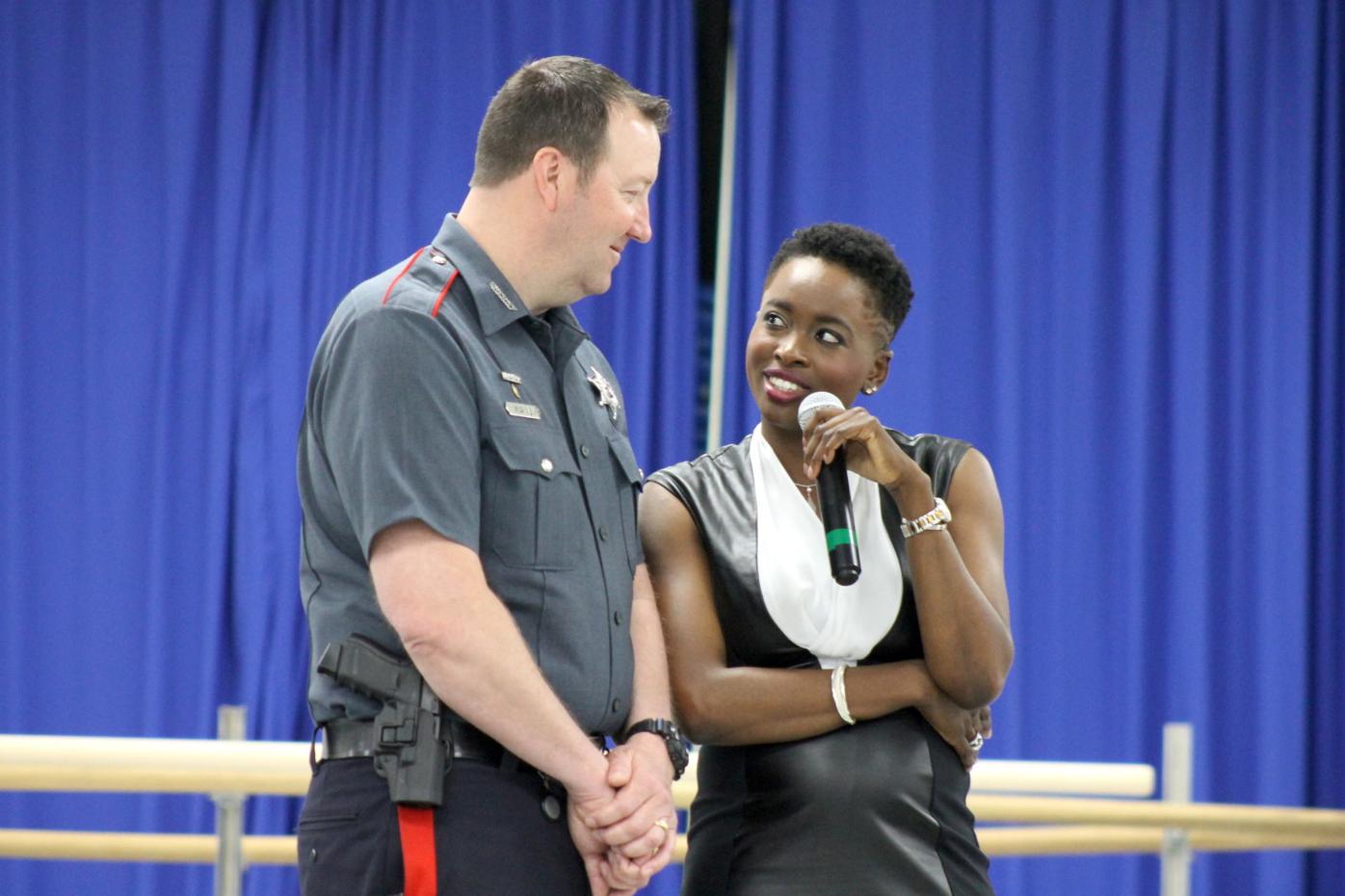 Shamere McKenzie, a human trafficking survivor, playacts with Sheriff Scott Adams as she demonstrates how pimps use flattery and other tactics while grooming their victims. 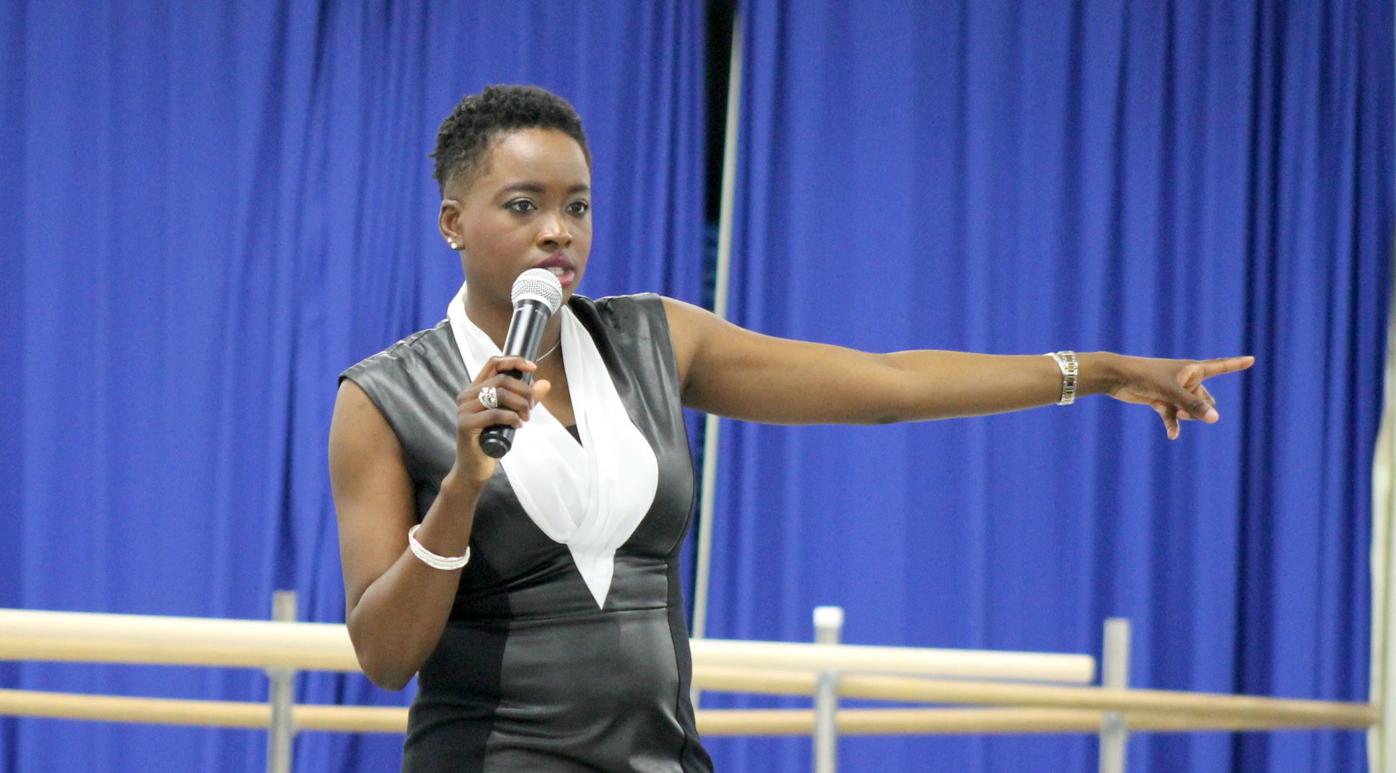 Shamere McKenzie, a human trafficking survivor, tells the audience about her 18 months as a forced prostitute. 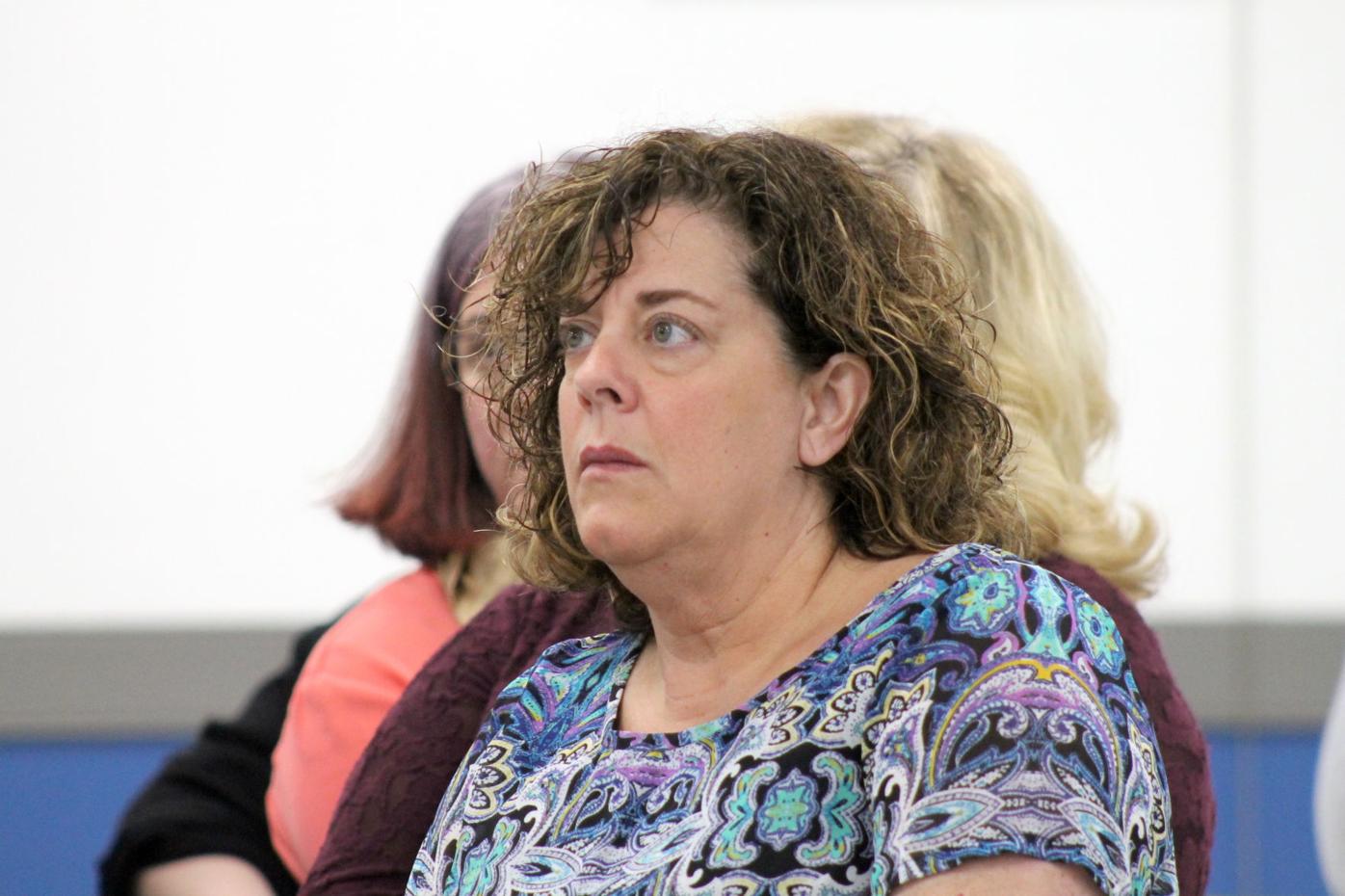 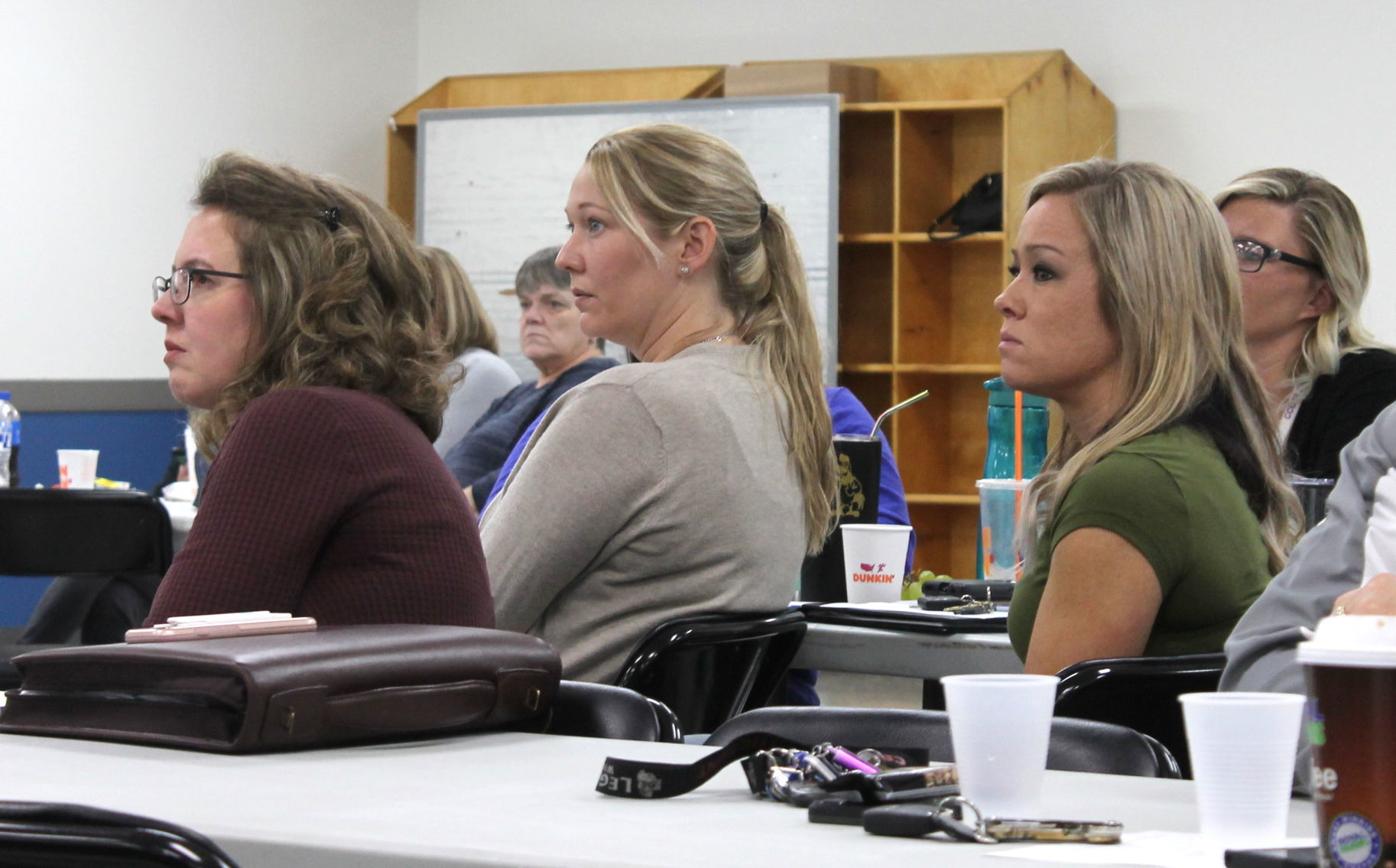 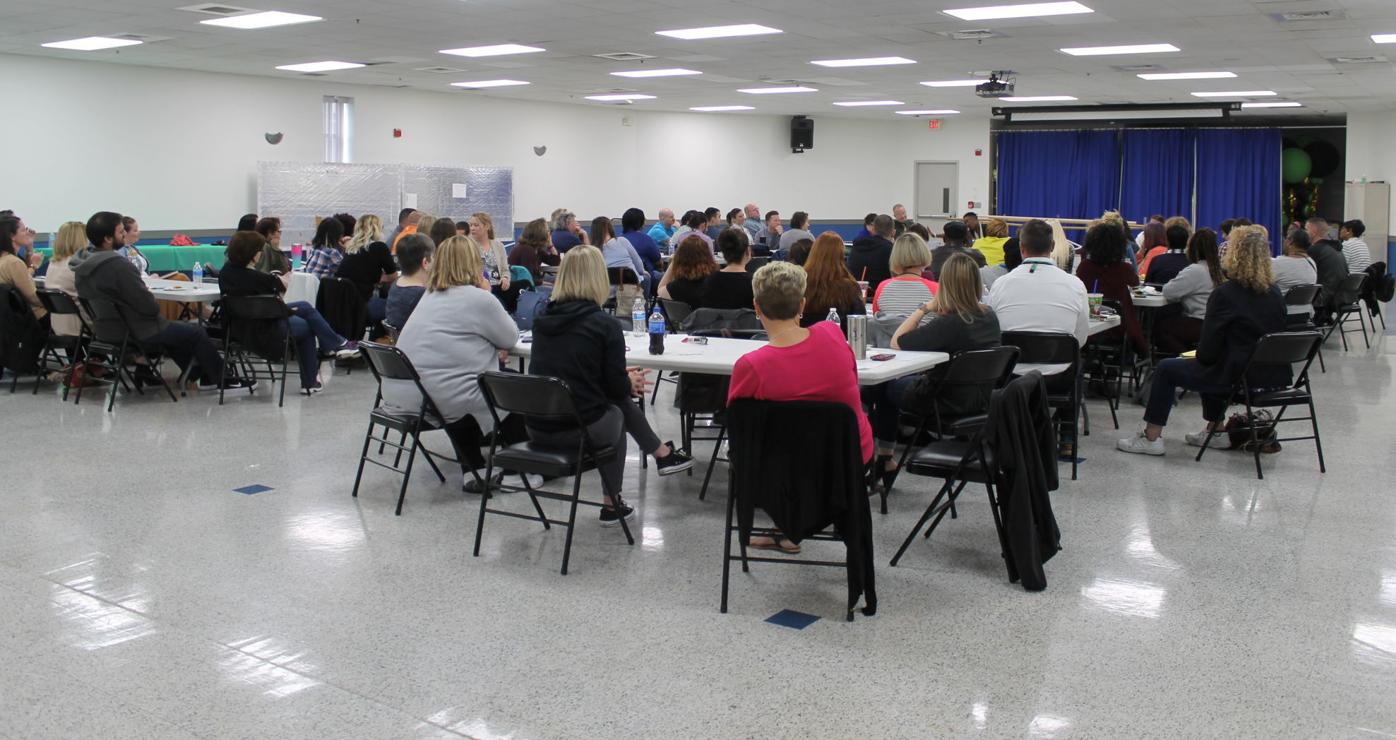 The audience listens as Shamere McKenzie, a human trafficking survivor, gives her presentation. 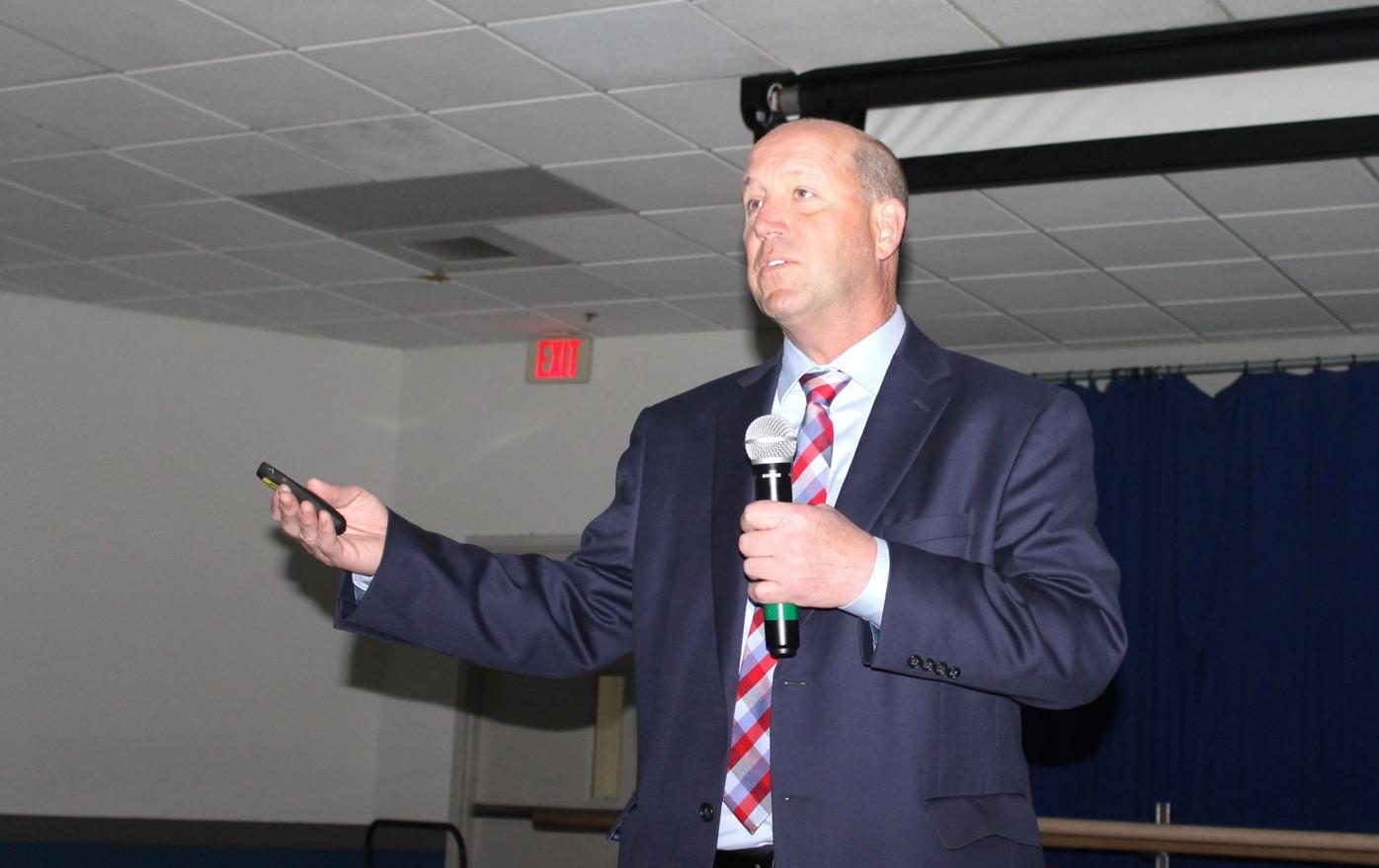 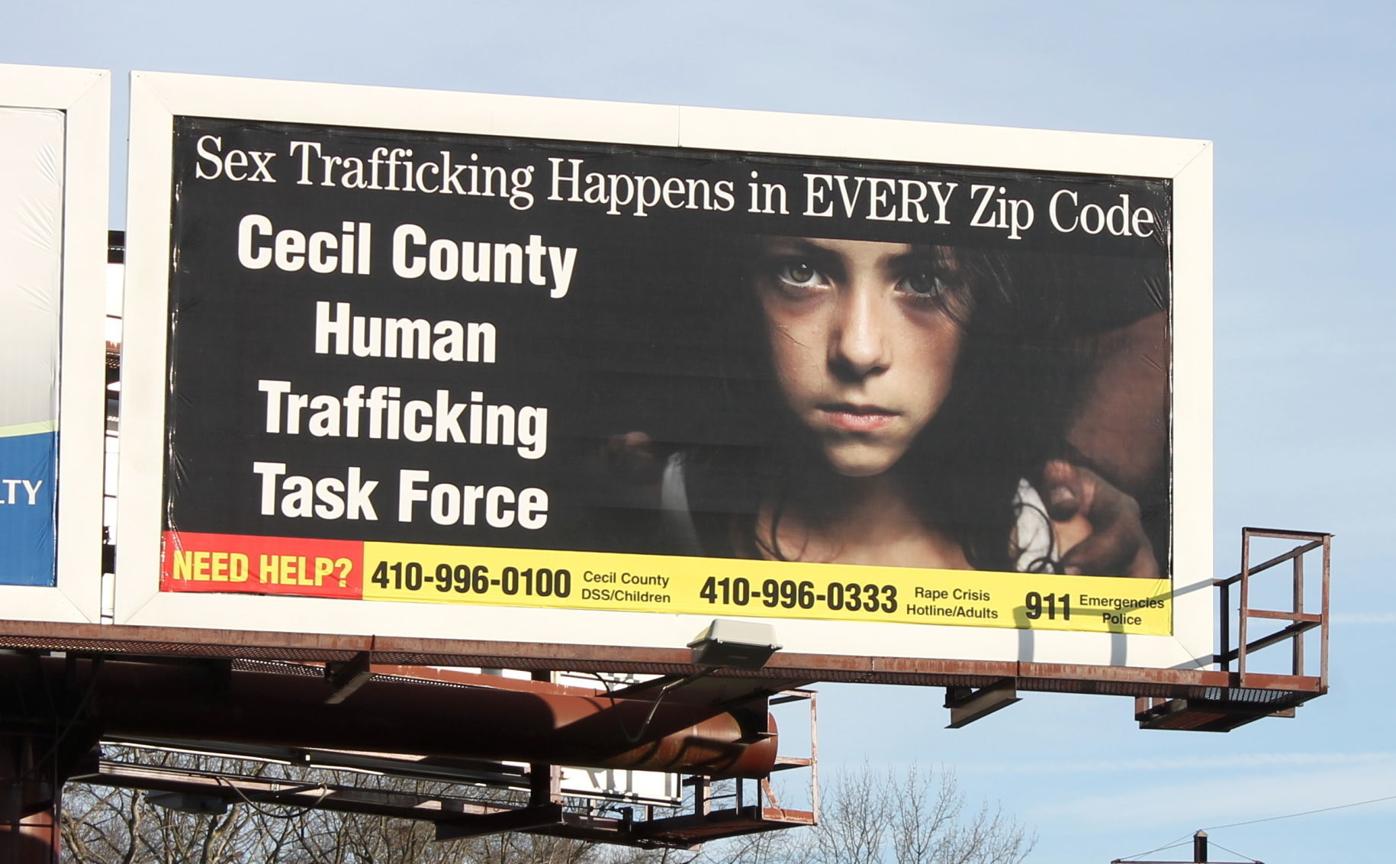 This is one of the billboards that the Cecil County Human Trafficking Task Force has in Cecil County to educate the public and to offer help to victims.

Shamere McKenzie, a human trafficking survivor, playacts with Sheriff Scott Adams as she demonstrates how pimps use flattery and other tactics while grooming their victims.

Shamere McKenzie, a human trafficking survivor, tells the audience about her 18 months as a forced prostitute.

The audience listens as Shamere McKenzie, a human trafficking survivor, gives her presentation.

This is one of the billboards that the Cecil County Human Trafficking Task Force has in Cecil County to educate the public and to offer help to victims.

ELKTON — Human traffickers seek out teenage girls and young women who are vulnerable — and that’s what Shamere McKenzie was some 14 years ago.

McKenzie was a junior majoring in criminal justice at a New York college, when a hamstring injury resulted in her losing her full track scholarship, leaving her looking for a way to finance her education. After securing a college loan, she still needed $3,000.

Around that time, McKenzie met a handsome, educated man who listened intently to everything that she had to say, and they started seeing each other regularly.

He provided McKenzie free lodging in a basement apartment, so she no longer would have to pay for her off-campus housing. And he provided her with a job that, at the outset, seemed innocent enough.

McKenzie saw this man as a potential boyfriend.

But McKenzie soon found herself under his brutal control, forced to work as a prostitute in Connecticut, New Jersey, Texas, Florida and New York in the months that followed.

McKenzie, 35, shared her story of human trafficking victimization Friday in the Elkton Town Hall multipurpose room as one of the guest speakers during a seminar sponsored by the Sexual Violence Prevention Committee and the Maryland Governor’s Office of Crime Control & Prevention.

She is CEO of the Sun Gate Foundation, which provides support to human trafficking survivors. It creates opportunities to access education to high school and college students through tuition assistance, financial aid for books and child care to survivors with children.

McKenzie, who, a day before her Elkton appearance, received a Governor’s Citation for her anti-human trafficking efforts in Maryland, serves as a keynote speaker on the topic nationally and internationally.

“Traffickers take their time,” McKenzie told the audience, explaining the grooming process in which pimps use flattery, love, attention and support to earn the trust of their victims.

Among the targets of human traffickers are “throwaway kids whose parents don’t want them,” according to McKenzie, noting that repetitive runaways fall into that category.

“They’re running away from something,” McKenzie said, listing sex abuse by a relative or family friend as one of the reasons, before adding, “Or they’re running to something.”

The man provided McKenzie with a job dancing, fully clothed, and she made $300 in two hours. That meant McKenzie could raise the $3,000 she needed with 10 hours of dancing.

One day, however, a customer asked “How much for oral sex,” prompting McKenzie to indignantly reject his proposition. That’s when the man who had been so supportive of McKenzie interjected himself into the situation, quoting a price, and, for the first time, showed his evil side.

“He took one step forward and put his hand around my throat ... He said, ‘Do you really think you’ll make it out of here alive?” McKenzie told the audience.

Even so, McKenzie tried to stand her ground — and that’s when the man beat her for the first time, stomping her into unconsciousness with his steel-toed boot, breaking a blood vessel in her right eye, which is still evident today.

Shortly after the beating, the tender side of the man reappeared.

That started a pattern that continued for about a year and a half, according to McKenzie, who summarized, “It was 18 months of physical and psychological abuse.”

McKenzie acknowledged that people who have never experienced such domination cannot fathom how someone could become a human trafficking victim.

“A lot of people who hear the trafficking story ask, ‘Why not just leave? Just run and call the police,’” McKenzie said.

In part, according to McKenzie, such an easy escape wasn’t available because the man who had listened so intently to her at the outset actually had been gathering personal information — which he then used for direct and indirect threats.

“He’d say, ‘I know where your mother lives. Remember, I picked you up at her house once?’ He said, ‘I know when your grandmother goes to work,’” McKenzie recalled.

The man also threatened to reveal McKenzie’s life as a prostitute — even though he had forced her into it — to her family and friends, she said.

Going to the police wasn’t an option, either, because, in part, prostitution is a crime and she was forced to commit that offense. During her 18 months as a human trafficking victim, McKenzie was arrested a few times.

Also deterring her, some of the police officers McKenzie had encountered looked down on her and used her.

“They used their badges for services,” McKenzie said.

She recalled an incident in which officers ordered her to take off her shoes and run, threatening to arrest McKenzie if they caught her. The officers jeeringly commanded, “Run ho,” as she sprinted down the street, with shoes in hand, McKenzie said.

The man also beat and threatened McKenzie, sticking a handgun in her mouth on at least one occasion and pulling the trigger, causing a clicking sound because the weapon was unloaded. Then he pistol-whipped her.

At one point, after the man had moved his human trafficking operation to Florida, McKenzie even sought the help of gang leader to escape, she said. But the plan failed and, as a result, she suffered physical consequences, she added.

In Connecticut, the FBI arrested McKenzie, along with the pimp, and she wondered why she was charged as a prostitute when she actually was a human trafficking victim — his victim.

With the help of a person, whom McKenzie refers to as her “guardian angel,” she finally was able to escape. That person provided her with shelter, food and other assistance.

McKenzie went through five mental health therapists because, according to her, they were not “trauma informed” and were unable to help, she said.

The sixth counselor, however, wanted to talk about McKenzie’s childhood, about her upbringing, about how she moved to the United States from her native Jamaica when she was 6 years old. The sixth counselor was persistent, but not overbearing, and she was friendly.

That eventually led to McKenzie sharing details of her ordeal as a human trafficking victim, as well as other deep-rooted issues.

“The trauma started at age 6, when I was sexually molested by a family friend,” McKenzie said, explaining that she had suffered “complex trauma” during her life.

McKenzie, who reported that she still receives counseling, cautioned those in attendance to take their time when interacting in their professional capacities with sex trafficking victims.

“All survivors are not the same. Avoid saying, ‘I know.’ We’re already programmed not to trust you. Treat others the way you want to be treated,” McKenzie told the audience, before commenting, “Believe you can make a difference. If you don’t, then quit.”

She then urged those in attendance to make a difference.

“Human trafficking is my issue. What is your issue? What are you doing about it?’ said McKenzie, who earned her bachelor’s degree in criminal justice in May 2015 and is considering attending law school to study public interest law.

“I personally like the victim’s point of view. We don’t always know what they know,” Rotolo said. “I know this will shape how I interact with victims in the future.”

“It’s always important to continue to train and understand victims better,” Adams said. “They never come forward themselves. But you might see signs. You may be handling a drug case, for example, and ask the right questions and it leads to human trafficking.”

“She shed much-needed light on the topic. It’s out there, but people don’t realize it,” Odom said.

Human trafficking defendants have been prosecuted and sentenced here over recent years, including an Ohio man who was arrested in June 2014 after two women at a North East-area hotel turned to an employee and reported that he had been holding them against their will, according to Cecil Whig archives.

The crime is prevalent enough that there is a Cecil County Human Trafficking Task Force, which, created about two years ago, is made up of law enforcement officers, social workers, Union Hospital employees, local prosecutors and Rape Crisis Center agents.

Interim Cecil County State’s Attorney James Dellmyer explained, “Cecil County is considered a hot spot for human trafficking problems. This is attributed to our location on Interstate 95 between Philadelphia and Baltimore and the opioid epidemic that the county is experiencing.”

He added, “Human trafficking is a largely unreported issue, but there have been recent prosecutions at the federal level, based on investigations conducted by Cecil County law enforcement and allied agencies.”

The other guest speaker Friday, Thomas Stack, who has been the Human Trafficking Coordinator for the Mayor’s Office of Criminal Justice in Baltimore since 2015, emphasized the prevalence of that crime.

(Stack worked as a Montgomery County Police Department detective specializing in human trafficking and prostitution investigations from January 2001 to September 2014, when he retired after 26 years on the force.)

He reported that Maryland is ranked fifth in the United States in terms of the highest number of human trafficking crimes, blaming that, in part, on the various interstate highways in this region and its economic demographics.

“There is a toxic mixture of poverty and wealth,” Stack opined.

Stack said his perspective on prostitution has changed dramatically from his early days as an officer some 30 years ago.

“I thought it was a victimless crime. ‘Human trafficking’ wasn’t even a word then,” he told the audience.

He went on in his law enforcement career to participate in scores of prostitution investigations and crackdowns, including “getting rid of 26 massage parlors in Montgomery County,” he told the audience.

Stack stressed that there are no such things as victimless prostitution and victimless human trafficking.

Maryland is ranked 5th this is horrible.