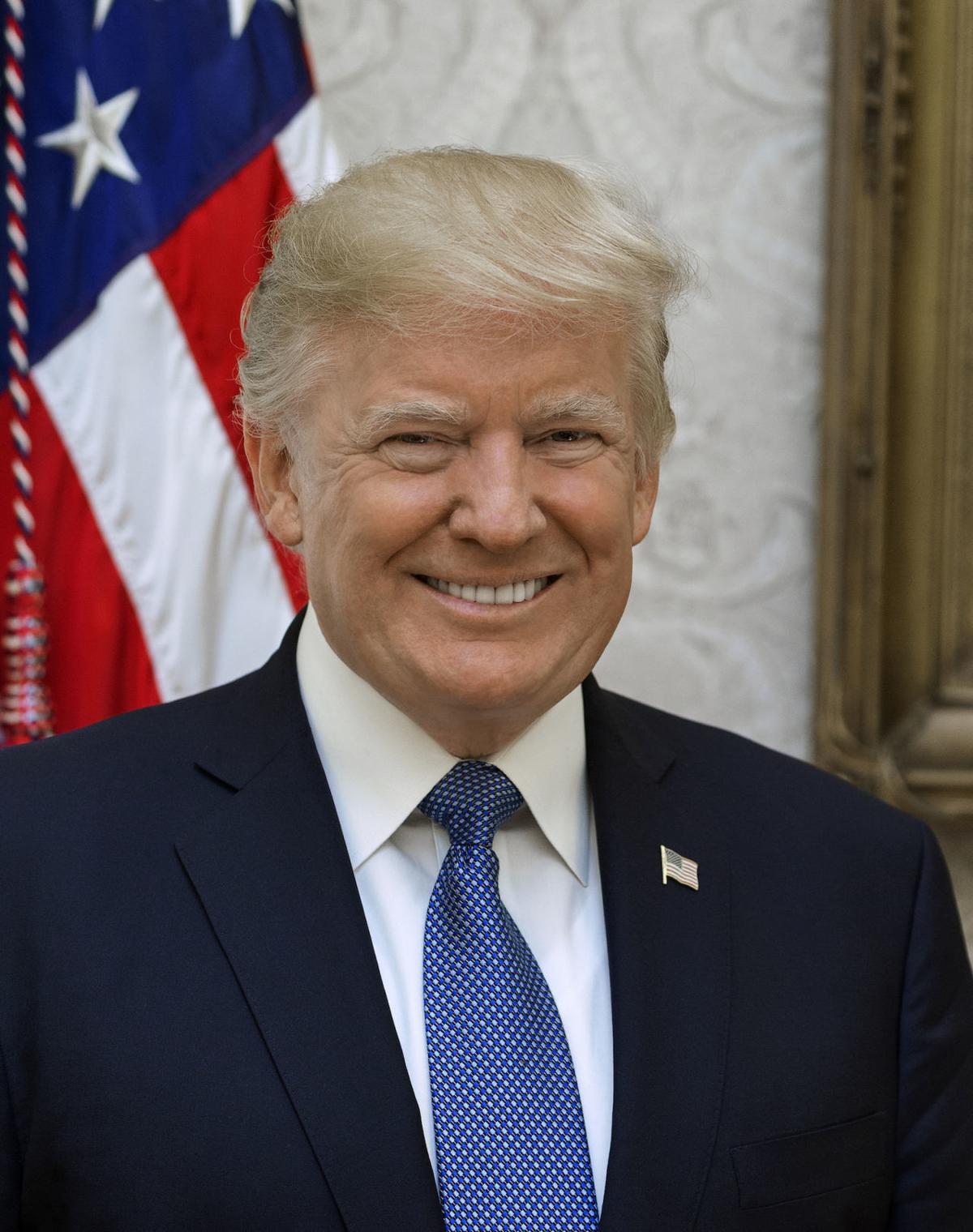 CHESTERTOWN — President Donald Trump was acquitted last week of charges of abuse of power and obstruction of Congress brought to trial in the Senate after the articles of impeachment were passed in the U.S. House of Representatives in December.

The Senate votes Feb. 5 were 48 guilty to 52 not guilty for abuse of power and 47 guilty to 53 not guilty on obstruction of Congress.

The impeachment proceedings are the result of allegations that Trump withheld military aid from Ukraine last year as the country continues to be in an armed conflict with Russia. Trump reportedly sought a public announcement from Ukraine into presidential candidate and former Vice President Joe Biden and his son in return for the funding’s release.

In a speech feb. 6 at the White House, Trump praised his Republican allies on Capitol Hill, while condemning House Democrats and others who pushed forward with impeachment.

“Think what we could have done if the same energy was put into infrastructure, prescription drug prices,” Trump said. “They took a phone call that was a totally appropriate call. I call it a ‘perfect call’ because it was. And they brought me to the final stages of impeachment.

“But now we have that gorgeous word — I never thought a word would sound so good. It’s called ‘total acquittal,’” Trump said. “’Total acquittal.’”

“President Trump’s conduct clearly crossed the line when he put his own personal interests over the country’s interests, using the power of his office for his own personal benefit,” Cardin said in a Feb. 3 floor statement. “No one is above the law. We must act to protect the Constitution and our democratic system of government.”

In a statement issued Feb. 5, Van Hollen called the trial “a farce,” saying the president and Senate Republicans “prevented even a single document from being produced” and “blocked every single witness from testifying.”

“President Trump used the power of the presidency to withhold vital taxpayer-funded military aid from Ukraine to extort its government into helping him in his re-election campaign,” Van Hollen said in the statement. “And because the trial was a farce, the final result will be seen by most of the country as illegitimate — the product of a tainted trial. And President Trump must understand this — there is no exoneration, no vindication, no real acquittal from a fake trial.”

U.S. Rep. Andy Harris, R-Md.-1st, who voted against the articles of impeachment in the House, issued a statement Feb. 6 commending the Senate for bringing the impeachment against Trump to an end and saying, “it was too bad the House proceeded along party lines to attempt to undo the last election and to interfere with the ability of the American people to make their choice at the polls in 10 short months.”

“It’s about time that this sadly partisan frivolous impeachment effort ended — and Congress can once again turn their attention to important matters facing America, like drug prices, healthcare costs, border security, and keeping our economy going,” Harris said in a statement. “The clear majority voting against removal in the Senate today shows just how frivolous this impeachment effort was.”

Wayne Gilchrest is a former Kent County High School teacher and a former Republican congressman who represented Maryland’s 1st District. He was a part of Bill Clinton’s impeachment in the late 1990s, having voted in favor of articles of impeachment against the Democratic president over alleged perjury.

Gilchrest’s votes at the time were about the integrity of American institutions, ensuring all are held accountable for being honest when testifying under oath.

In looking at Trump’s acquittal by the Senate, Gilchrest was not surprised by the outcome. It takes a two-thirds majority vote in the Senate to remove a sitting president. The president’s own party currently holds the majority of seats.

“I guess nothing surprised me, except my sense of sadness and disappointment. That was key. But I got over it. Twenty-four hours later I got over it. I’ve come to accept, sadly enough, that there are some members who would prefer to stay in the House or the Senate than to express their deep feelings of what they really think,” Gilchrest said in an interview Monday, Feb. 10.

Gilchrest spoke about the pressure on Capitol Hill to stick with the party. He also described the drive for self-preservation among members of Congress, with reasons ranging from some thinking they are the best to serve their constituents and the country to others who have campaigns funded by organizations that demand absolute fealty or risk a primary challenge.

More so concerning for Gilchrest than the verdict is how people, everyday people, treat each other over opposing political views. He talked about growing up in the 1950s with family and friends split between Franklin Roosevelt Democrats and Thomas Dewey Republicans.

“There were vibrant arguments in the house, visceral vibrant arguments,” Gilchrest said. “We kids heard those loud arguments — not even discussions — at every family dinner or holiday picnic. And yet, these people, all dead now, remained fast friends through it all.”

Gilchrest said having experienced that, having experienced the challenges of combat in Vietnam — which he described as giving him firsthand knowledge of “bad political decisions causing the death of 58,000 Americans and who knows how many psychological problems,” having experienced the rigors work and raising children, he has been brought to the point that he can clearly stated Trump should have been removed from office because of his abuse of power.

“I also strongly feel that his policies are not based on good information. He has not proven to be competent at what he does. And his bullying and shallowness reveals an absence of integrity,” Gilchrest said.

While Gilchrest is no fan of Trump, he has a brother who thinks the president is good for the country. Gilchrest said the two of them, following a political discussion, were still able to go out and hook catfish off the dock at Turner’s Creek, make a casserole of their catch and enjoy each other’s company.

“So as a nation, which is founded on the constitutional principles that that document was made specifically for people with different opinions, we can still love our neighbors regardless of our political views. And that’s the critical issue here, the foundation upon which we can continue to be a democracy,” Gilchrest said.

Some Republican senators — such as Lamar Alexander, R-Tenn. — expressed concern over Trump’s actions leading up to the vote. Only one voted guilty in the trial.

“It was inappropriate for the president to ask a foreign leader to investigate his political opponent and to withhold United States aid to encourage that investigation,” Alexander said in a statement Jan. 31, adding that it should be up to the American people decide what to do about it in the upcoming election.

It was Sen. Mitt Romney, R-Utah, who broke party ranks and voted in guilty Feb. 5 on the charge of abuse of power. In a floor speech, Romney spoke about being a “profoundly religious person” and his sworn oath before God “to exercise ‘impartial justice.’”

Romney, a former Massachusetts governor who previously ran for president, said that Trump asking a foreign government to investigate a political rival and withholding “vital military aid” as a means of pressure “rises to the level of a ‘high crime and misdemeanor.’”

“Given that in neither the case of the father nor the son was any evidence presented by the President’s counsel that a crime had been committed, the President’s insistence that they be investigated by the Ukrainians is hard to explain other than as a political pursuit. There is no question in my mind that were their names not Biden, the President would never have done what he did,” Romney said.

Romney is the first senator in history to vote against a president who is a member of his own party.

Gilchrest spoke about the differences between the impeachment trials of Clinton and Trump. He said there were more moderates during the Clinton proceedings, leading to a more congenial and less bitter atmosphere.

“There was no strong effort to hide anything. You know, you had witnesses, you had testimony and it was way more open than it is now,” Gilchrest said.

He said went it was over and Clinton was acquitted, the Democrats went to the White House. There, he said, Clinton, instead of being angry, “quite profusely” apologized for what he had put the nation through.

“Whether he meant it or not, it was good for the nation to hear his apology,” Gilchrest said.

Not so with Trump, he said.

“Here we see belligerence, revenge, bullying against some quite remarkable people who don’t deserve it,” Gilchrest said, adding that Trump is not healing the nation, he is dividing it.

Gilchrest thinks the impeachment process is already having an effect on this year’s elections, which in addition to Trump and every member of the House include 35 senators.

“I think there’s going to be a dark shadow cast over everything as Donald Trump continues to disparage people. And I’m thinking that people will grow tired of that dark shadow and want it to go away,” Gilchrest said. “I’m hoping that it will be through the course of this difficult emotional trauma that’s the cumulative effect of Donald Trump, people will be relieved when its over and the only way to be relieved will be to vote in massive numbers.”

Gilchrest, who now heads up the Sassafras Environmental Education Center at Turner’s Creek and is deeply concerned about climate change and the Trump administration’s lack of action, ended with a question.

“Can you work together with your neighbors and friends, of different political persuasions to answer the question, ‘How does the sun make air and water?’ Have your children and grandchildren help,” he said.

The Maryland primary is April 28. The general election is Nov. 3.