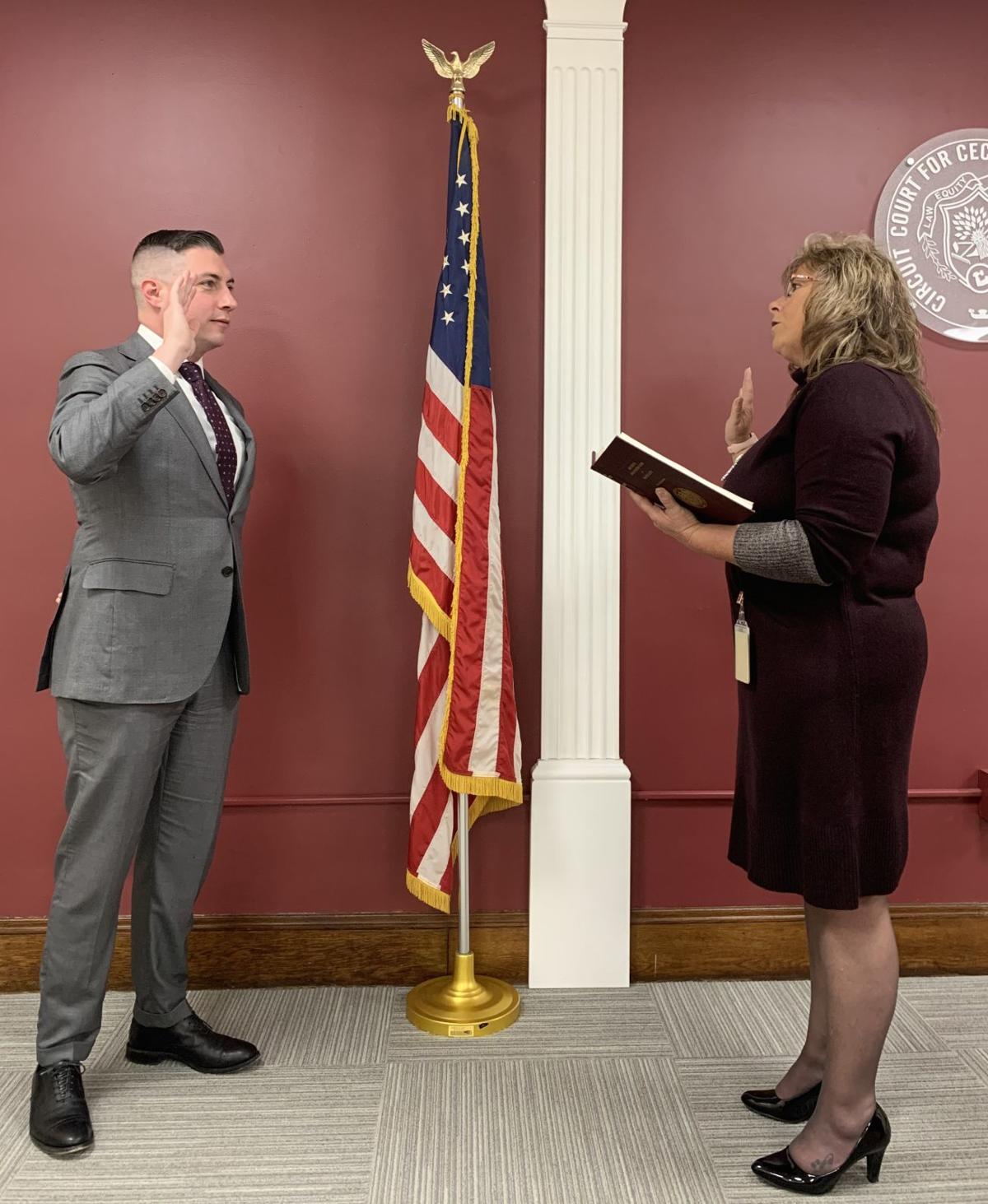 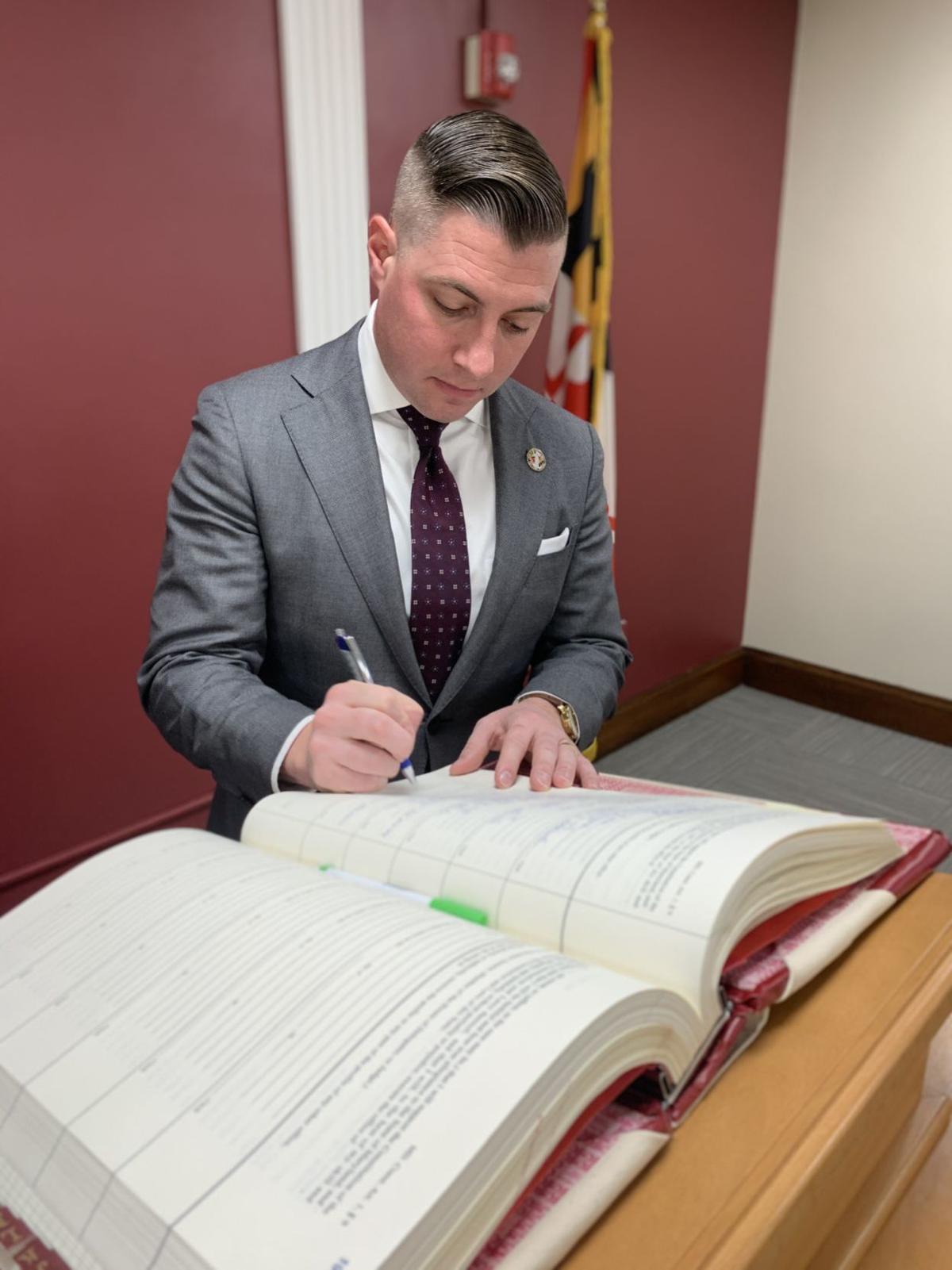 The change in title does not give Dellmyer more powers, nor does it change his duties and responsibilities.

It does, however, signal permanence at the state’s attorney position held by Dellmyer. (Under state law, sitting judges have the option of removing an interim state’s attorney and appointing someone else.)

“James is doing a good job. He has all the qualities we want in a state’s attorney,” Baynes told the Cecil Whig, explaining the reasons he and his fellow judges decided it was time to make Dellmyer this county’s state’s attorney.

Should Dellmyer, a Republican, want to retain his Cecil County State’s Attorney position, he would have to run in the 2022 election as the incumbent.

“Then it would be up to the citizens of Cecil County,” Baynes noted.

Dellmyer, 36, of Chesapeake City, took his oath of office Friday during a brief ceremony in the Cecil County Circuit Courthouse.

His deputy state’s attorney, or second-in-command, Patricia A. Fitzgerald, also took her oath of office, as did Dellmyer’s staff of 13 assistant state’s attorneys – all of which is required by law whenever there is an SAO leadership change.

Dellmyer had served as interim state’s attorney since March, when the four sitting judges appointed him to that position after his then-boss, Amanda Bessicks, in a surprising development, announced her resignation due to medical issues. Bessicks worked her last day on March 15, two weeks after tendering her resignation.

Bessicks had named Dellmyer as her deputy state’s attorney on Aug. 9, 2018, the day she took her oath as state’s attorney in a quickly orchestrated swearing-in ceremony that occurred five months before the traditional date and was mandated by a rare judicial order.

Under normal circumstances, Bessicks wouldn’t have taken her oath of office until January 2019.

Having won the Republican primary in June 2018 and having no Democrat opponents in the November 2018 general election — making Bessicks the de facto winner — the four judges decided that Bessicks could take her oath ahead of schedule.

(Bessicks had the distinction of being the first woman to hold the Cecil County State’s Attorney position.)

At the time of Bessicks’ political victory, the SAO did not have a permanent chief prosecutor, a situation that dated back several months.

(Because Trostle lived outside Cecil County, he was precluded from running for the state’s attorney position because of election residency rules. Trostle no longer is employed by the SAO.)

The judges opted to expedite Bessick’s swearing-in ceremony because they believed it would be beneficial to have the office run by an elected state’s attorney, instead of an interim state’s attorney. They also reasoned that it would give Bessicks a head-start in transitioning into her role as state’s attorney.

Although she had been at the helm of the SAO since August 2018, Bessicks technically was in the second month of her four-year term when she announced her resignation.

Dellmyer, whom she had named as her deputy state’s attorney at the time, had worked in the SAO since March 2017 — prosecuting misdemeanor cases in district court and later serious felonies, including child sex offense cass in circuit court, as a part-time assistant state’s attorney.

Baynes said he was aware that approximately nine months had passed before he and his fellow judges took last week’s action to remove Dellmyer’s interim status and make him this county’s state’s attorney.

Baynes noted, however, that the delay does not indicate indecision or reluctanance on the part of he and fellow judges.

Instead, the delay merely represented the judges’ sensitivity to the rapid succession of unexpected changes in SAO leadership during the past three years, he explained.

“It had nothing to do with James. He is doing a great job,” Baynes said. “I think everyone was a bit hesitant because that office had gone through so much turmoil. So we wanted to give James time to settle in to the job and set up his office the way he wanted.”

Baynes agreed that the judges’ decision to make Dellmyer this county’s state’s attorney, after he had served nine months with the interim status, can be viewed as a “vote of confidence” for him.

“He is the state’s attorney from here on out,” Baynes remarked.

On Friday, after his swearing-in ceremony, Dellmyer commented, “I am humbled and honored by the decision of the Judges of the Circuit Court. The confidence they have shown in me with this appointment means very much to me and my team. I look forward to furthering the progress we have made protecting the safety of the citizens of Cecil County, which is our most important mission.”

Under his leadership, Dellmyer has pushed to make the SAO “more responsive and better able to serve” Cecil County residents, according to Steven Barlow, an agency public information officer.

“The Office has undergone significant changes and improvements, including transitioning all prosecutors from part-time to full-time employment. This has resulted in increased productivity, and has helped to accomplish a cost-effective and fiscally conservative budget,” Barlow said.

In addition, to better promote accountability and productivity of staff, Dellmyer created an Attorney Performance Evaluation system, and he has implemented mandatory training for staff in various fields, Barlow added.

“As a result of these changes, the Office of the State’s Attorney is better equipped to handle cases involving career criminals and violent offenders,” Barlow explained.

With grant funding provided by the Maryland Criminal Intelligence Network (MCIN), translating to no cost for Cecil County taxpayers, the SAO has developed a special prosecutions unit consisting of an additional experienced prosecutor and paralegal, who also provides multi-agency support as a crime analyst, according to Barlow.

“By implementing intelligence-driven prosecution in the MCIN program, the office is better able to identify and successfully prosecute the most serious criminal offenders in Cecil County,” Barlow stressed.

Dellmyer also plans to continue his efforts to support “individuals and families who struggle with the disease of addiction,” according to Barlow, who further reported that Dellmyer has backed the Cecil County Health Department in its efforts to provide community support by “advocating for treatment for non-violent offenders.”

Moreover, Dellmyer has acted as a liaison between the Cecil County Health Department and law enforcement agencies, Barlow said.

Dellmyer has been practicing law in Cecil County since December 2009, when he earned his law degree at Widener University Delaware Law School in Wilmington, Del., and then passed the Maryland Bar.

So now the State's Attorney has a new taxpayer-paid salary for a "public information officer." Wouldn't it be more effective to hire another prosecutor, or investigator, or victim's assistant? Of course not-- since Dellmyer's agenda is to win election to his position in the future election. Too bad that the judges bought into his political agenda.