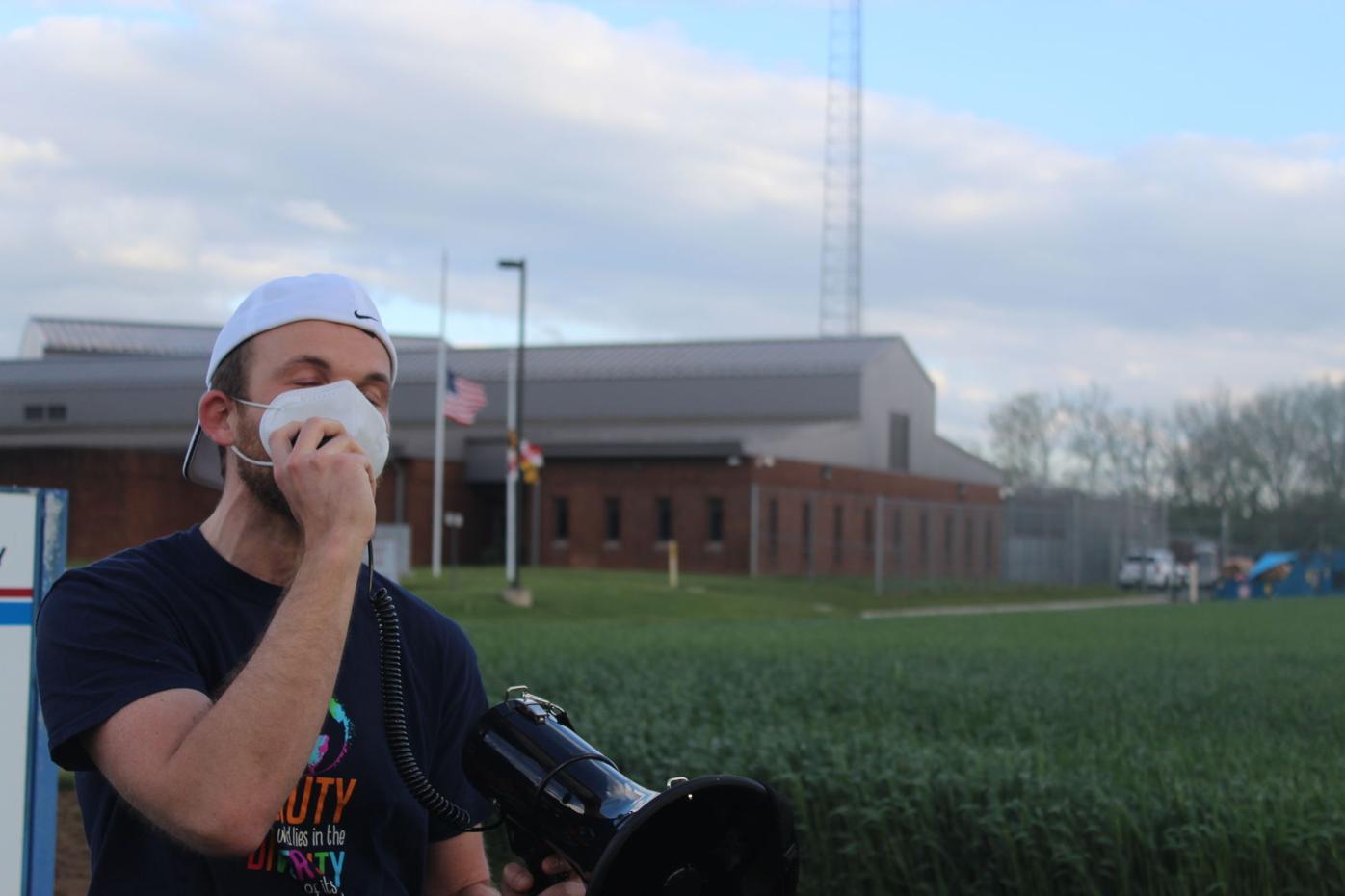 Cecil Solidarity organizer Tim Rothermel was one of many speakers who came out in support of inmates at the Cecil County Detention Center. 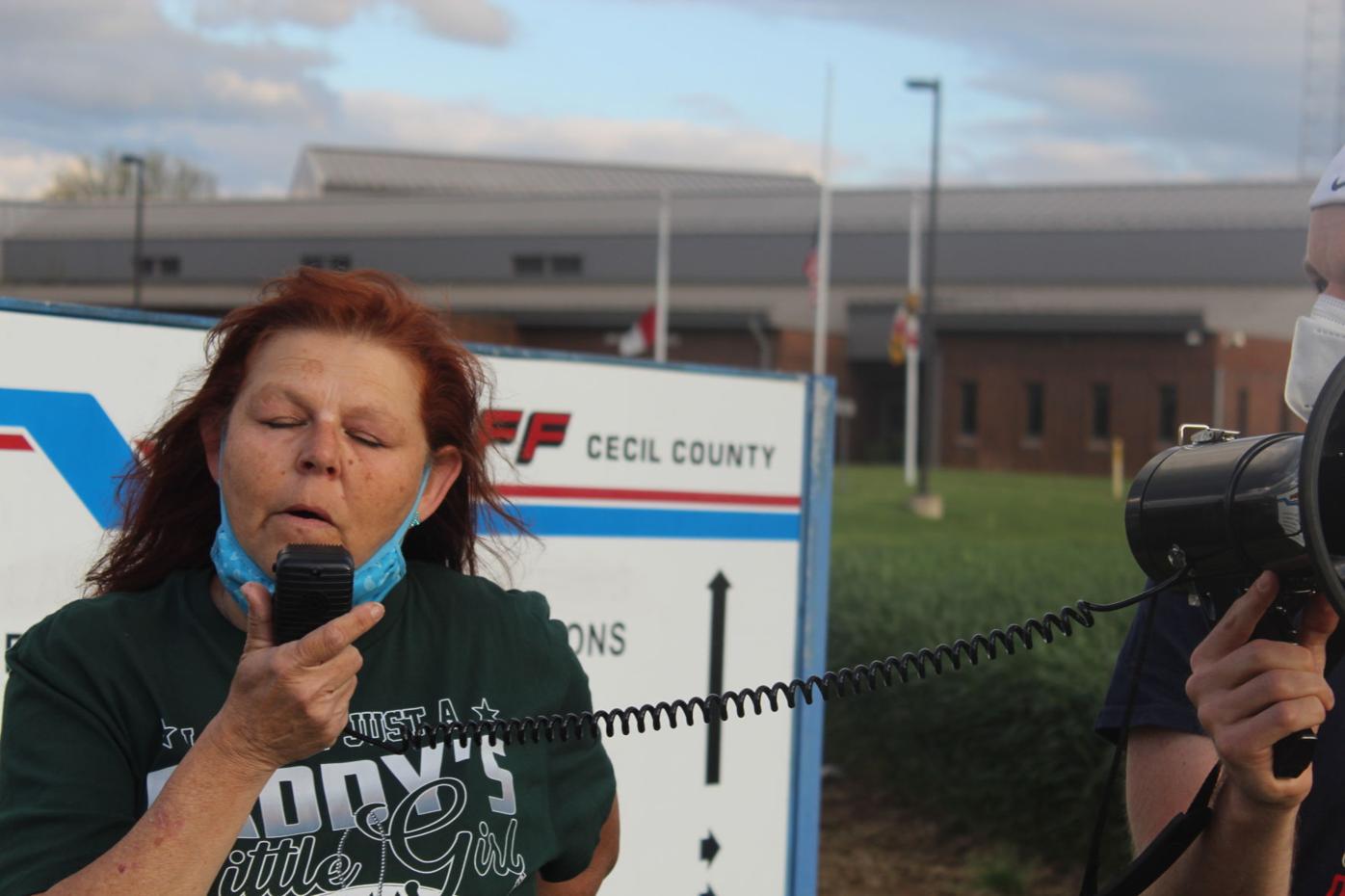 Samantha Vaught’s (above) husband Eddie Vaught suffered a broken jaw that went without surgery while detained at the CCDC. 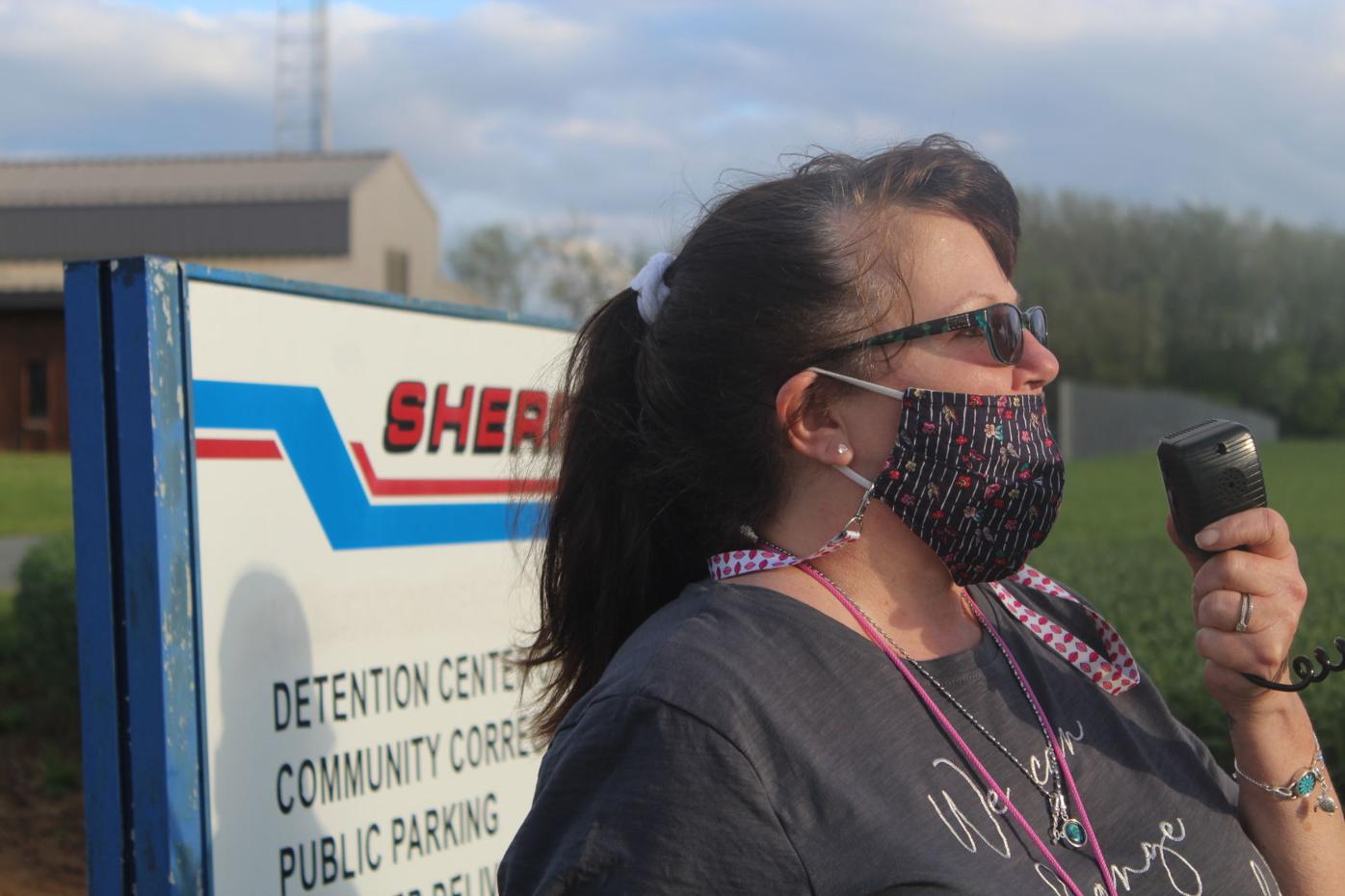 Protest participant Teresa Shade, the mother of recent inmate Michael O’Brien, spoke about the actions of the protesters inside the detention center at the Cecil Solidarity protest on Wednesday Night. 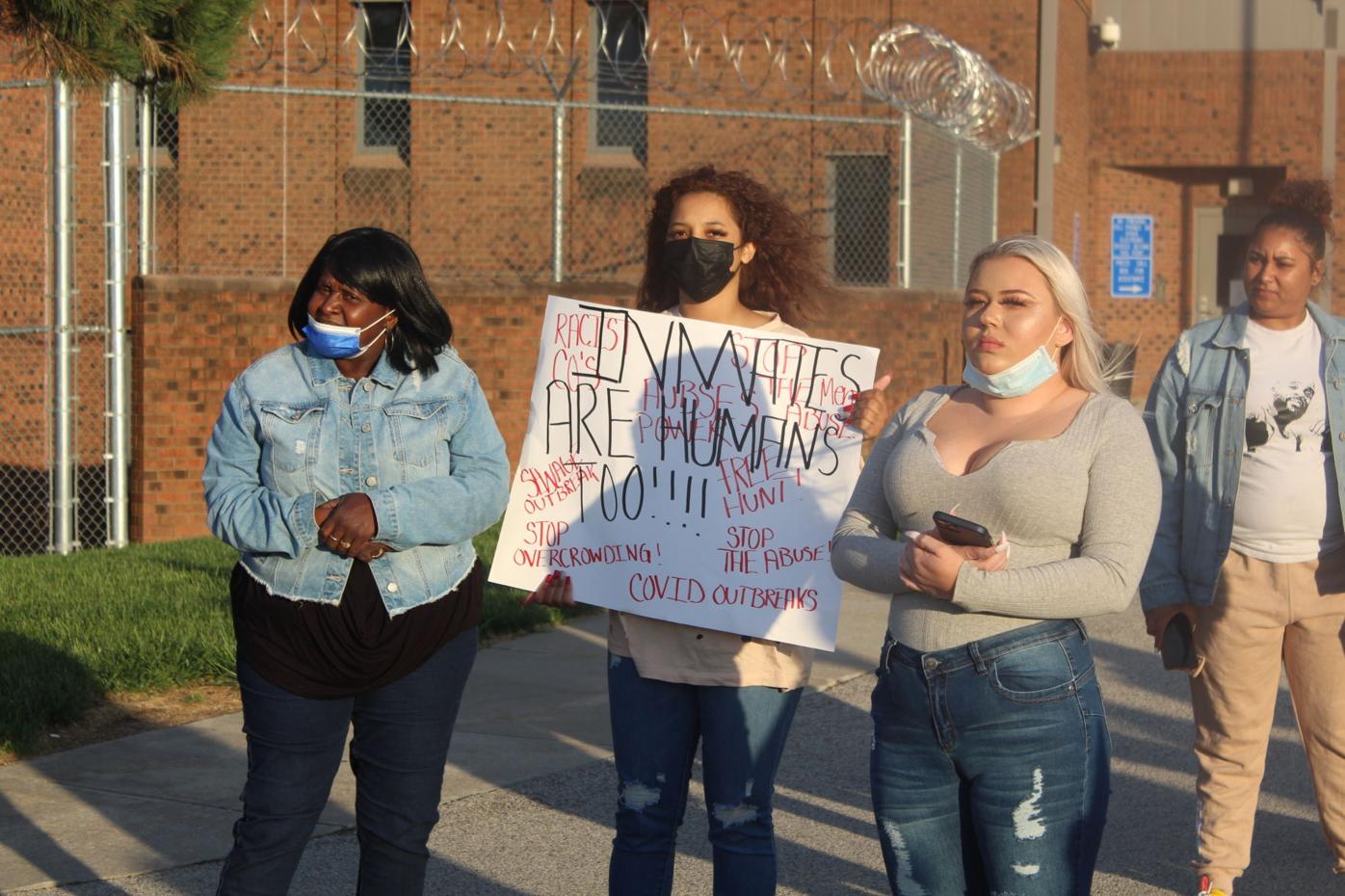 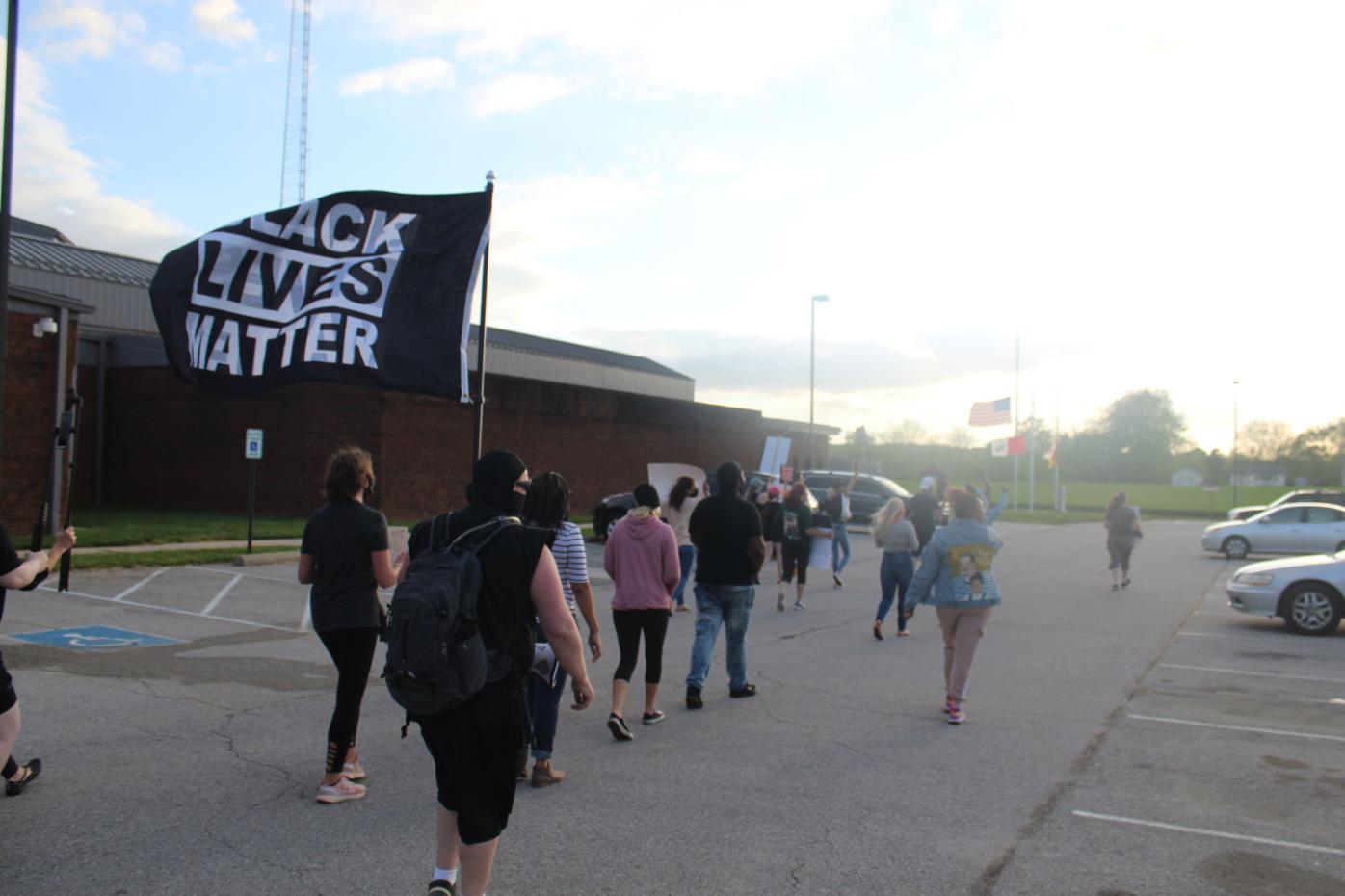 Cecil Solidarity organizer Tim Rothermel was one of many speakers who came out in support of inmates at the Cecil County Detention Center.

Samantha Vaught’s (above) husband Eddie Vaught suffered a broken jaw that went without surgery while detained at the CCDC.

Protest participant Teresa Shade, the mother of recent inmate Michael O’Brien, spoke about the actions of the protesters inside the detention center at the Cecil Solidarity protest on Wednesday Night.

“We are here to be a voice for the voiceless,” said Christine Givens, president of Cecil Solidarity. “If we’re not going to do it, who else is going to do it?”

The group gathered at the county road that leads to the detention center before listening to several speeches, mainly by family members or partners of inmates who addressed the conditions at the CCDC that their loved ones described to them.

The group marched through the detention center parking lot, taking several laps around the facility while chanting, “inmate lives matter.”

A main motivation for the protest was to support the actions of the inmates in the jail. On April 17, inmates from the Lower Red Max Tier reportedly began refusing to eat the regular meals provided by the CCDC, in an attempt to secure better conditions. Their main concerns were COVID procedures, sewage/plumbing, access to medical services, religious services and overcrowding.

“The ladies and gentleman in there haven’t even been found guilty yet,” said protest participant Teresa Shade, the mother of recent inmate Michael O’Brien. “Why are they treating them like animals?”

Shade, along with Samantha Vaught, the wife of inmate Eddie Vaught, brought pictures of their incarcerated loved ones to the protest. Shade’s picture shows O’Brien with his two young nieces at a Friendly’s restaurant. Samantha Vaught brought a photo collage containing an array of pictures, ranging from snapshots of her and her husband as a couple to him on vacation in Ocean City.

Eddie Vaught said the protest inside the detention center lasted about a week and a half, with the inmates who did eat relying on food solely from the commissary.

“Everybody was making a sacrifice one way or another to try to get some attention to this,” Eddie Vaught said.

Quadasha Johnson told the crowd gathered outside the center about one brother who entered the center with a broken heel. She asserted that her brother never received proper medical treatment and only recently received crutches.

Moreover, Johnson said that a different brother, was moved to a pod with inmates who tested positive for COVID — even though he tested negative.

Johnson said one of her brothers participated in the CCDC protest.

“He’s allergic to peanuts, so he can’t eat anything anyway,” said Johnson. “They’ve been giving him peanut butter and jelly sandwiches.”

At Wednesday night’s protest, Shade said her son’s asthma — which increases risk for complications from COVID or another respiratory disease — made her act; organizing people on the outside of the county jail to help improve conditions. She asserted that her son did not receive an inhaler during his stay. When O’Brien was transferred to the Somerset County Detention Center, he received an inhaler within days, according to Shade.

In an interview, inmate Eddie Vaught said that, for the 16 months he has been detained at the detention center, plumbing issues have caused feces to move from one toilet to another.

Vaught said to make the toilets flush properly, two inmates have to flush the toilet at the same time.

“I should have been able to get medical attention immediately,” Eddie Vaught said.

Eddie Vaught said he was placed in a medical isolation cell for almost a month, and received ibuprofen daily for pain.

Medical records, provided by Samantha Vaught, show that Eddie Vaught was taken to University of Maryland Medical Center for surgery nearly three weeks after his initial fall and observation by Union Hospital. Eddie Vaught said by the time he received surgery, the bone had already begun healing, forcing the doctors to rebreak the bone to move in a proper position. The incident caused nerve damage to the right side of his face.

“My husband will never smile again,” Samantha Vaught said during the protest.

Eddie Vaught is now restricted to a diet of soft foods. He said that it has been difficult to receive the Ensure nutrition shakes that are supposed to accompany his diet, as the detention center will run out of them. Vaught said getting proper access to his medications has also been difficult. A Feb. 20 entry in Eddie Vaught’s medical records, shows an example of how the jail ran out of one of his medications so was unable to administer it to him.

Samantha Vaught requested that her husband be placed in a Home Monitoring Program, so he could come home to have better access to health care. Her request was denied.

Eddie Vaught said he contracted COVID last October. He was put in 23 hours of isolation and 1 hour outside. They were given vitamins. Even though he had tested positive, his cellmate, who had tested negative, was not moved to a separate cell.

“I was positive. He was negative,” Eddie Vaught said. “They had him in a cell with me and they wouldn’t move him out of that cell.”

He said the tier was not locked down until everyone in the tier contracted COVID.

“Everybody ended up getting it,” said Eddie Vaught. “They told us that it’s probably best that everybody gets it all at one time so it’s over and done with.”

Eddie Vaught also said that detention center workers aren’t following proper procedures to mitigate the spread of COVID, asserting that they don’t change their smocks when moving from tier to tier.

“If there’s an emergency and or an assistance call, staff are going to run from one tier to the other without tearing their smock off,” said Allen.

Allen asserted that inmates did not refuse all of their meals during the duration of the protest.

Eddie Vaught said the staff told inmates that if they refused three meals in a row they would be placed on lockdown. Vaught said inmates stacked uneaten trays in their cells, instead of directly refusing meals.

Allen said that he believes the reason inmates refused to eat was because they were receiving fewer hot meals.

“My assumption for why they refused their meal is because instead of two hot meals and one cold meal, they received two cold meals and one hot meal,” said Allen.

Allen did not go into the specifics of the CCDC hunger strike policy.

Allen asserted that toilet overflows are due to inmates flushing down trash and other objects.

When the Whig reached out to Allen on Wednesday, for further comment and clarification before the Cecil Solidarity protest, Allen said she had no comment.

The Cecil County Health Department (CCHD) conducted a site visit to the CCDC on April 19, because of the complaints from inmates and their relatives, according to Lauren Levy, health department director. The CCHD report looked at six different areas in the jail identified in the complaints.

“At the date and time of the Health Department visit, no substantial physical facility issues were observed,” Levy said.

The report filed by the CCHD states that the plumbing issue of toilets flushing into adjacent cells was a structural issue throughout the lower red facility. It also documents previous sewage overflow in the sewage area outside, noting that the area was never cleaned up.

Cecil Solidarity is planning to take more actions against CCDC.

“Until we get the changes that we were pushing for tonight, there’s no reason to stop,” said Tim Rothermel, an organizer with Cecil Solidarity. “The people that are locked up behind those bars are still getting mistreated right now.”