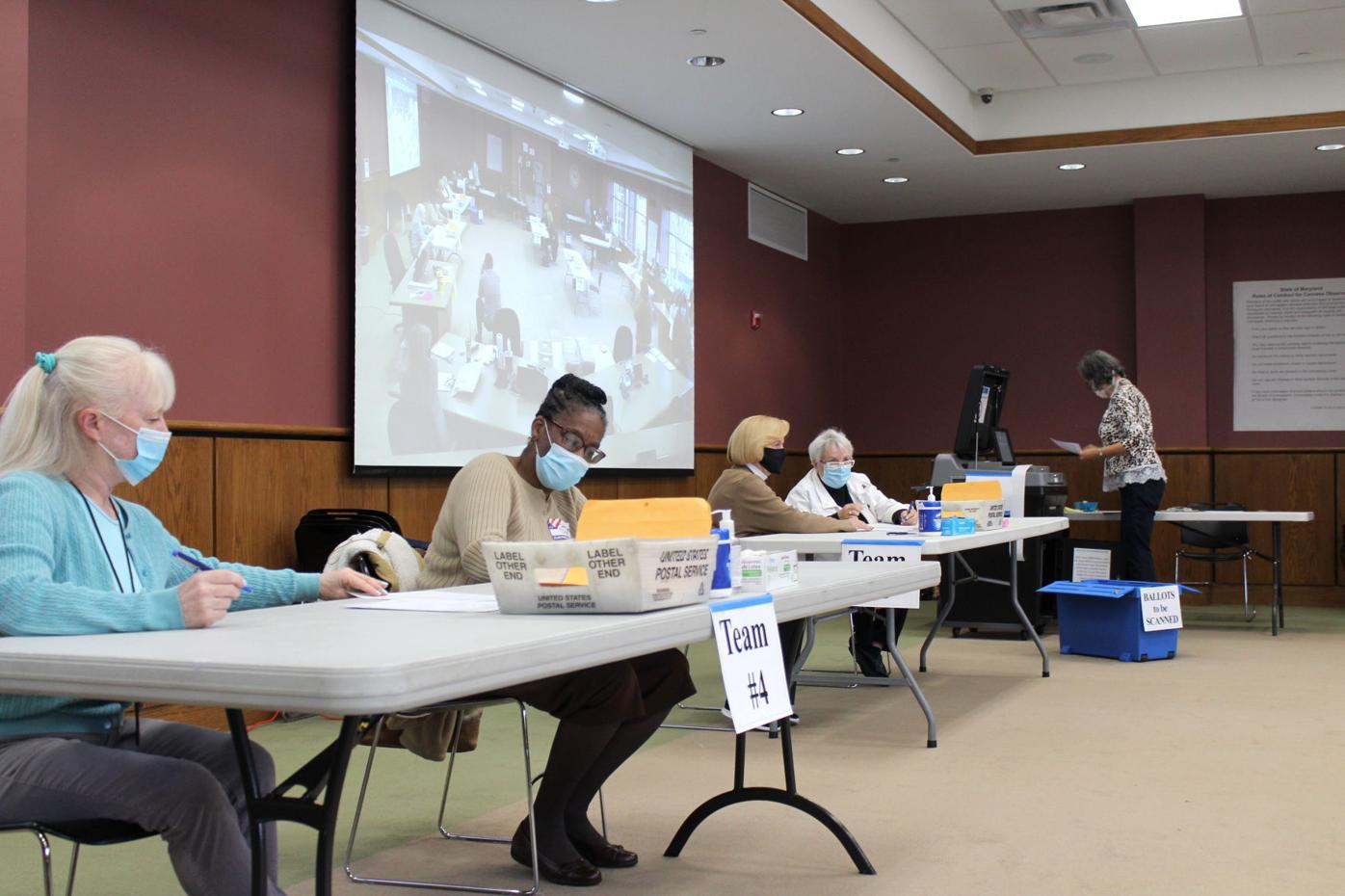 Bi-partisan teams of election workers tally up mail-in ballots at the Cecil County Administration Building on Nov. 5, a process that was live-streamed online for transparency. 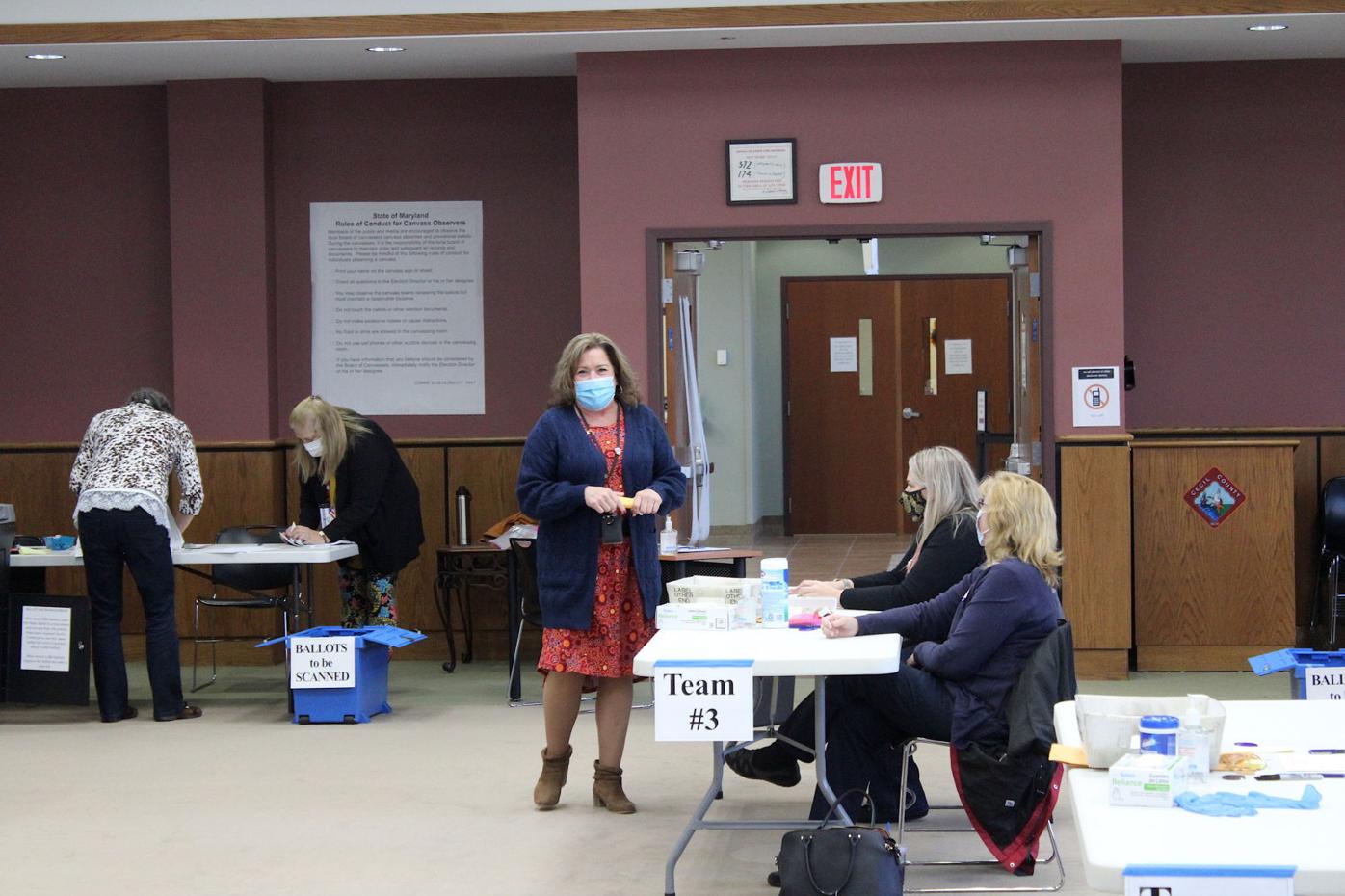 Cecil County Elections Director Ruie Lavoie (center) commended her staff for working hard in the days after the election to meet the state certification deadline of Nov. 13.

Bi-partisan teams of election workers tally up mail-in ballots at the Cecil County Administration Building on Nov. 5, a process that was live-streamed online for transparency.

Cecil County Elections Director Ruie Lavoie (center) commended her staff for working hard in the days after the election to meet the state certification deadline of Nov. 13.

ELKTON — Cecil County was the first county in Maryland to certify this month’s election results after a rigorous ballot count and auditing process. A bi-partisan election board of three Republicans and two Democrats appointed by Gov. Larry Hogan certified the county’s results on Friday, Nov. 13, and a state board will certify the statewide results on Dec. 8.

In the days after Nov. 3, election workers submitted the county’s results to Clear Ballot, an independent auditing firm, and conducted their own internal audit to check for variance between the number of ballots cast and the number of voters who checked in on Election Day. Cecil County had zero variance.

“God blessed us,” said Cecil County Elections Director Ruie Lavoie. “It was a combination of a lot of hard work from diligent people.”

Many other counties certified on Nov. 13, which was the statewide deadline, but larger jurisdictions like Montgomery County and Baltimore County needed additional time. After certification, the results undergo an additional manual audit of randomly selected polling places, in accordance with a statewide law instituted in 2018.

Each state sets its own deadlines and processes for certifying election results. Key competitive states like Michigan and Pennsylvania certified President-elect Joe Biden as the winner earlier this week, despite pressure from outgoing President Donald Trump and his allies to overturn the results of legally-cast ballots.

Lavoie said she was not aware of any external pressure to manipulate the election results in Cecil County or across the state. She said the rigor of the count and audit process eliminates any possibility of voter fraud. Officials at every level, she added, are committed to running free and fair elections.

“Election officials across this country — they don’t do the job because they make a lot of money, and they don’t do it because it’s easy work,” she said. “When we’re going through the process, we don’t care how anybody votes. Our goal is to have every vote count.”

News outlets called Maryland for Biden early on Election Day. He holds a 33-point statewide lead on Trump, according to unofficial results which will be certified Dec. 8., easily securing the state’s 10 electoral college votes.

Acknowledging the officials who ran a smooth election amid unprecedented circumstances — record turnout, increased mail-in and drop-off voting due to the COVID-19 pandemic and heightened political tension — the governor proclaimed Nov. 2, 2020 as Election Hero Day.

“Maryland is proud to recognize the heroic efforts made by election administration and poll workers, and urges voters, businesses, organizations, public officials and all candidates for public office across our state to join in celebrating and thanking these individuals,” Hogan wrote in the proclamation.

With the election process winding down in Cecil County, there’s still work to be done — Lavoie spent Tuesday morning compiling financial reports to compensate her election workers for expenses like driving between polling places. Next, she’ll turn back to the unending work of voter registration which was put on hold in October as mail-in votes began rolling in.

Looking ahead to the holidays, Lavoie commended the hard work of her team — and hopes they get some rest now that the heaviest lift in processing the election results is finished.

“From the day after the election, I planned so that we would be able to meet that goal and certify on the 13th, regardless of how many hours I had to work each day,” she said. “All my staff felt the same way — they didn’t mind the longer hours. They wanted to get certified.”