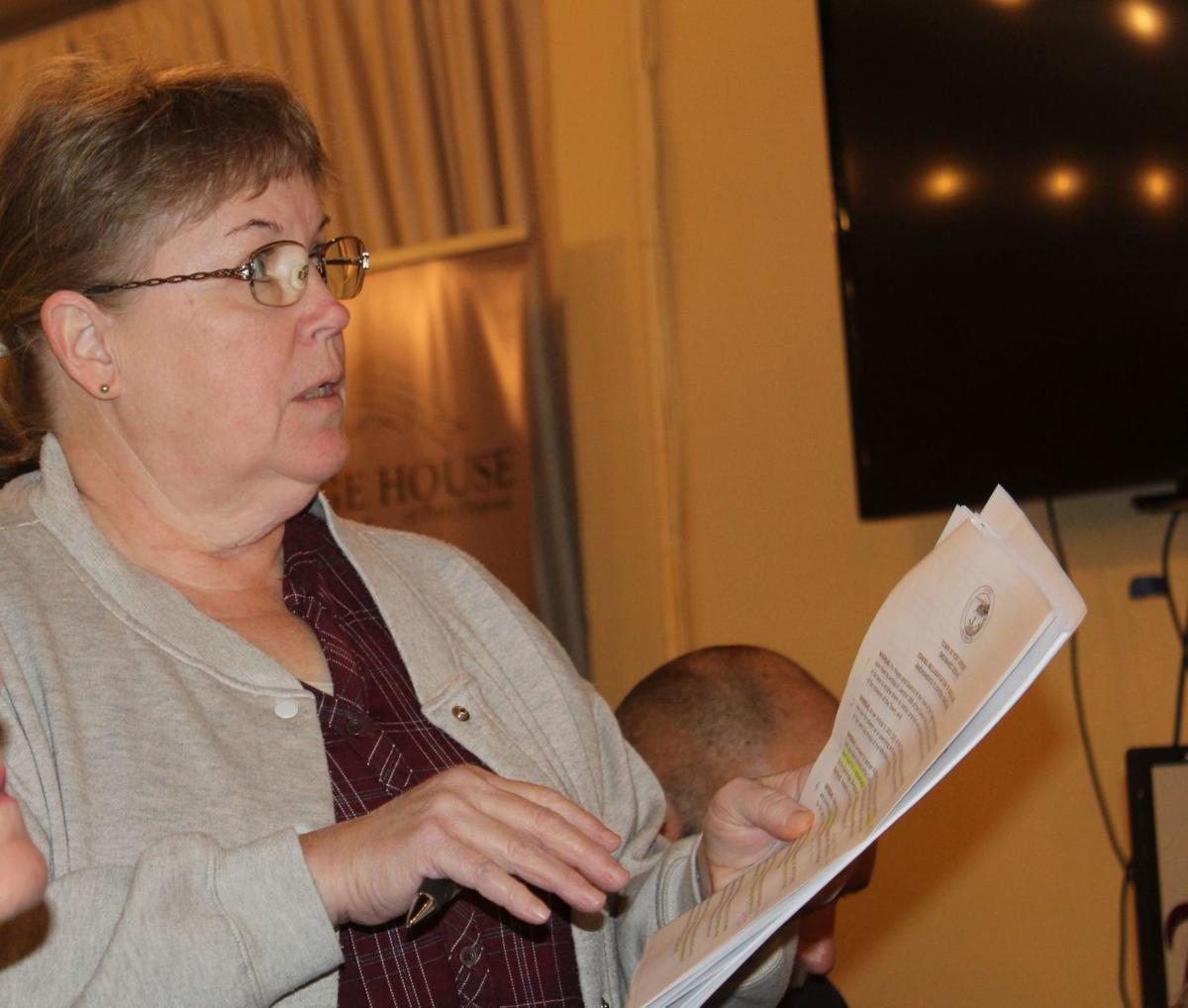 Diane Sexton asks Port Deposit officials why there is no green space or park land being considered with the approaching development of Bainbridge. 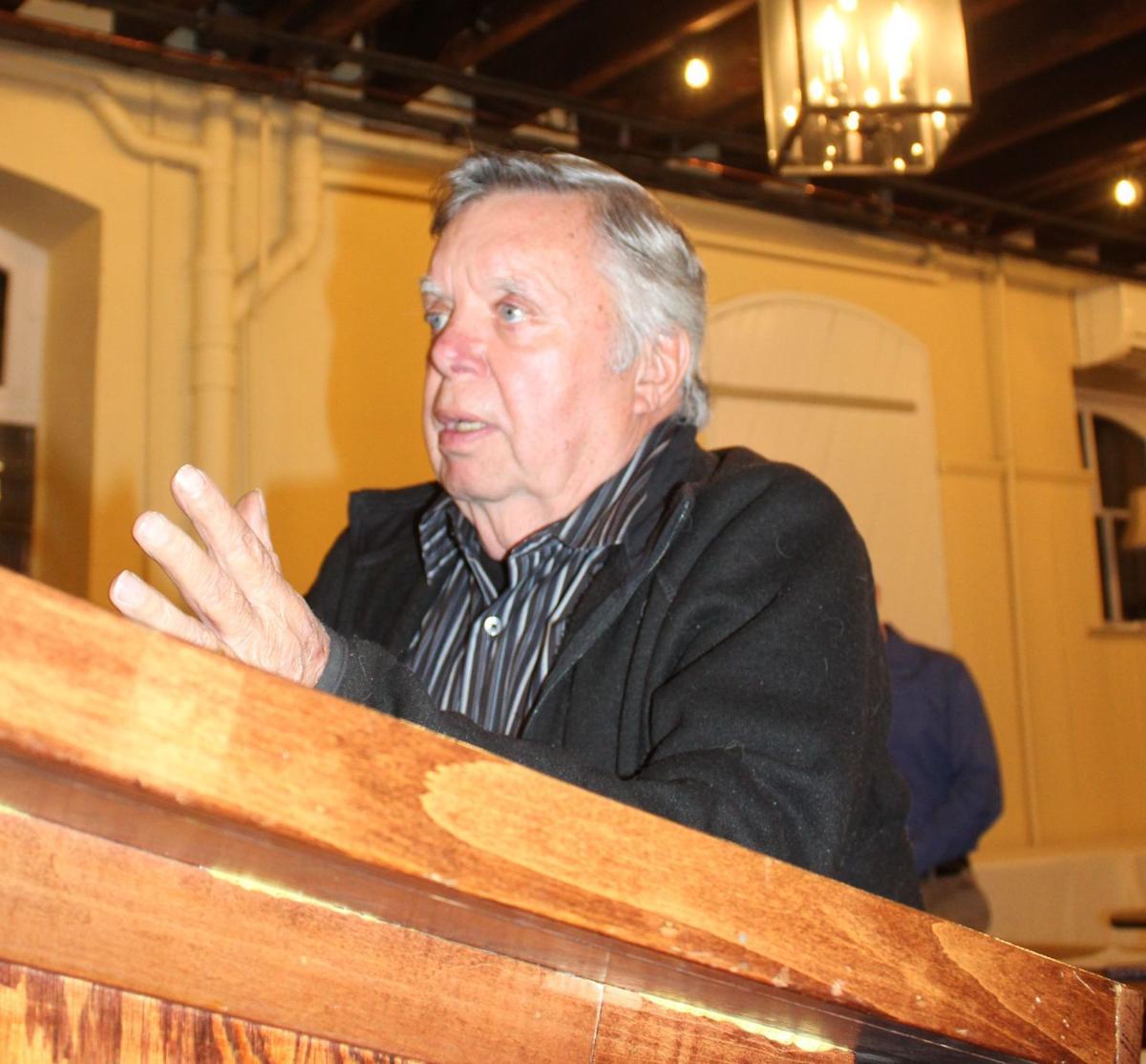 John Diggin asks the Port Deposit mayor and town council what the development at Bainbridge means to his adjoining property. 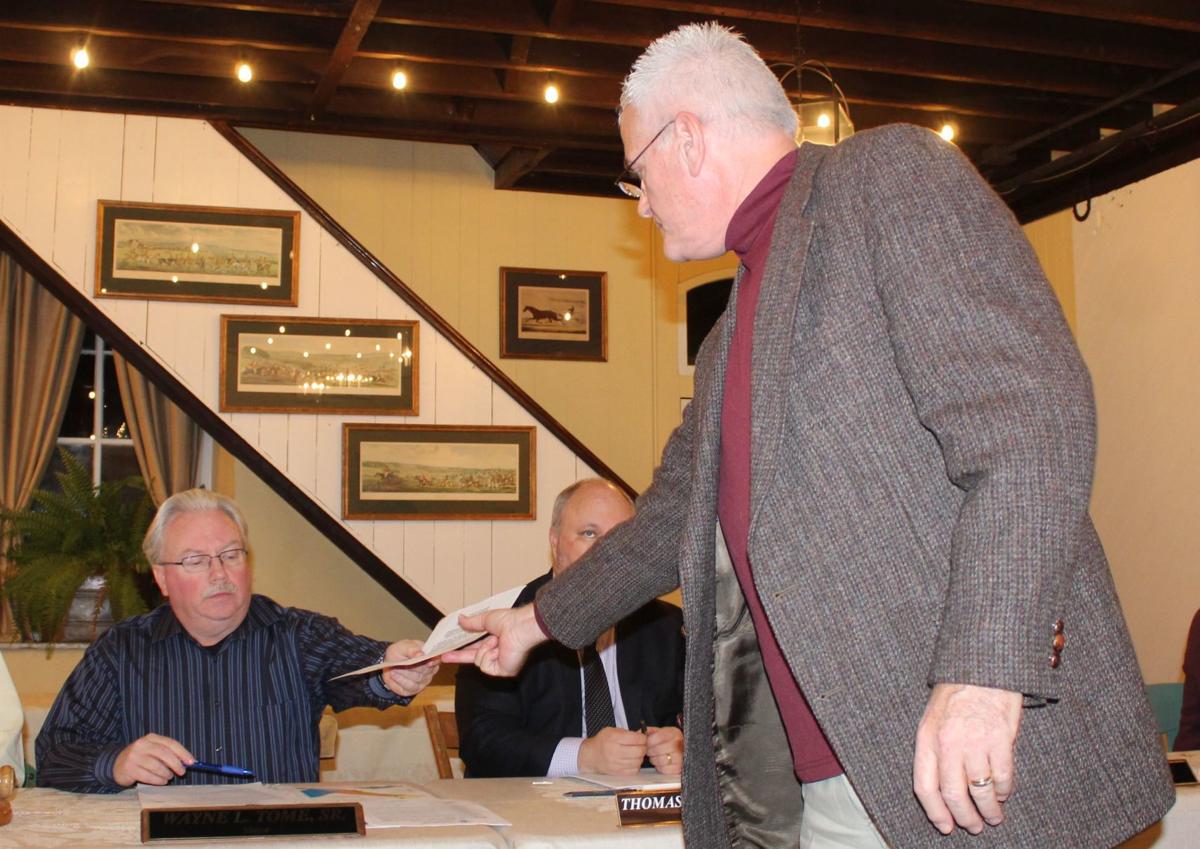 Jeff Heck, chairman of the Port Deposit Planning Commission, hand Ordinance 2020-03 to Mayor Wayne Tome for a vote by the town council after the commission approved it earlier.

Diane Sexton asks Port Deposit officials why there is no green space or park land being considered with the approaching development of Bainbridge.

John Diggin asks the Port Deposit mayor and town council what the development at Bainbridge means to his adjoining property.

Jeff Heck, chairman of the Port Deposit Planning Commission, hand Ordinance 2020-03 to Mayor Wayne Tome for a vote by the town council after the commission approved it earlier.

At almost 1,200 acres, the parcel is the largest piece of property in Port Deposit, noted Mayor Wayne Tome at the public hearing, which was held in Martha Barchowsky’s Carriage House to accommodate the anticipated larger audience.

To avoid confusion and save time, Tome let the audience know that the hearing was solely about Ordinances 2020-1, -02 and -03 and had nothing to do with another area development.

“This is not about Granite Cliffs. It’s not in Port Deposit,” the mayor explained. “It has nothing to do with this evening’s discussion.”

With some 417 housing units proposed on a tract overlooking the town, Granite Cliffs is already attracting concern by neighbors and town officials. Those concerns are the potential for flooding from stormwater run off, increased stream and creek flooding, and pollution to name a few. A change.org petition is urging people to attend the hearings to be held by the Cecil County Planning Commission and ask that the proposal be voted down.

“We share some of your concerns,” Tome added. “We’ll see that the development at Bainbridge is done right.”

The clarification caused no one to leave the hearing.

Vicky Rinkerman, town administrator, summarized each ordinance in order, followed by comments from the audience, motions and discussion by the council, and then a vote.

Ordinance 2020-01 establishes the Business and Industry, or B&I Employment District zone and defines it; creating standards for compliance.

Ordinance 2020-02 reclassifies all the parcels of land, noting the change from BX — or mixed use — to B&I Employment District. The change was required when clean up of the property was stopped short of a level allowed for residential.

“The ordinance makes a change to the zoning map,” Rinkerman said, pointing out that the large blue area that was BX is now B&I.

With the designation comes not only a list of permitted uses for the land, but also a list of what would be prohibited including the manufacture of asphalt, anything with chemicals, quarries, crushers, salvage or landfills.

There were only a few public comments, including Diane Sexton, who wanted to know why there are no plans to have parks included in the development at Bainbridge.

“What else is taken out aside from residential?” Sexton, who lives along Craigtown Road, wanted to know. “There’s no open space or park land?”

Tome said there may be park land or green space around the Tome School property, but said that there would be no walking trails around the business and industrial elements due to safety concerns.

The Tome School property, remnants of what once was a college preparatory boarding school for boys, was recently listed as one of the top three sites for historic preservation by the Maryland Historic Trust.

Sexton was also worried about how close this industrial center would be to her property. Rinkerman assured her that there would be buffers and a 300 foot setback.

Ordinance 2020-03 is basically a housekeeping measure to go through the town documents and remove all references to the BX zoning and make sure the updated language is in place.

“As you can imagine BX was throughout the language of the (original) ordinance,” Rinkerman said. “This cleans out the language and all reference to BX; basically striking BX from our zoning code.”

Rinkerman said there would be amendments made along the way as the different companies arrive. That first tenant, likely to build on the initial 400 acre site, is still nameless. Toni Sprenkle, project manager for the Bainbridge Development Corporation, a quasi-governmental board charged by Maryland to guide the development of the state-owned property, said the BDC deals directly with MRP Industrial so no one locally knows the identity of the potential tenant either.

She expects that announcement to be made in the coming months.

John Diggin, a resident of Bainbridge Road, asked the mayor and council what the zoning changes will mean for the property he purchased many years ago.

“I bought it when they were going to put a race track up there,” Diggin said.

Tome pointed out that Diggin’s property, while next door to Bainbridge, is actually not in town limits.

“If you want to consider annexation or requesting a zoning change, do that in about 5 years,” Tome said.

Tom Knight, a member of the council, said one of the keys to winning a zoning change is proof that the neighborhood has changed.

“This is absolutely a change in the neighborhood,”Knight said.