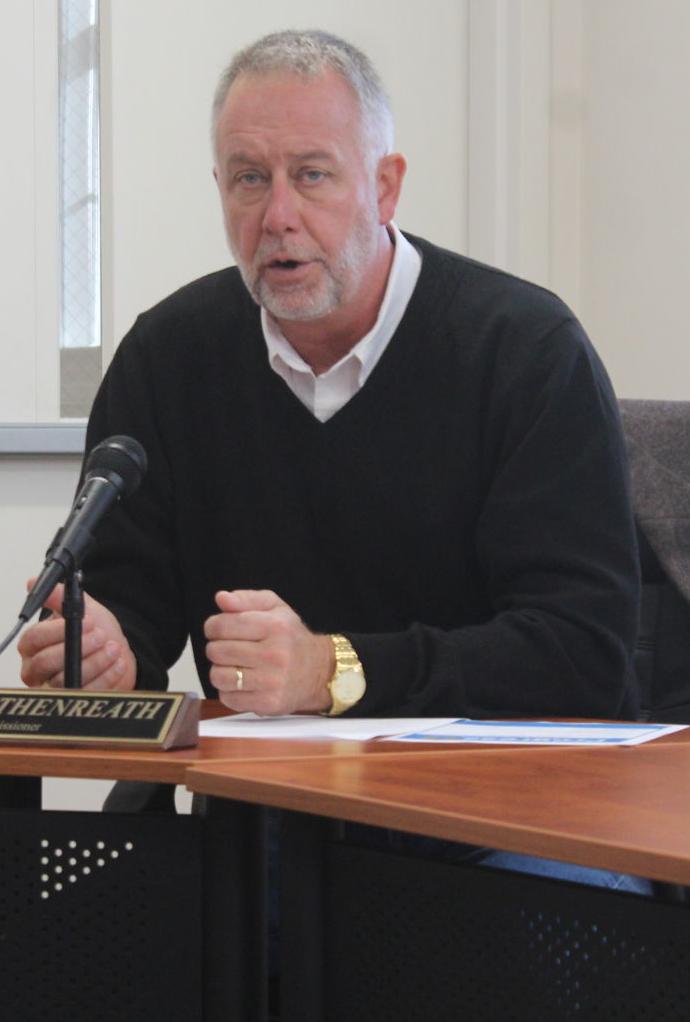 Allen Authenreath, who resigned from the Rising Sun Board of Commissioners, said he hopes to be remembered for his role in bringing the Chester Water Authority interconnect to Rising Sun. 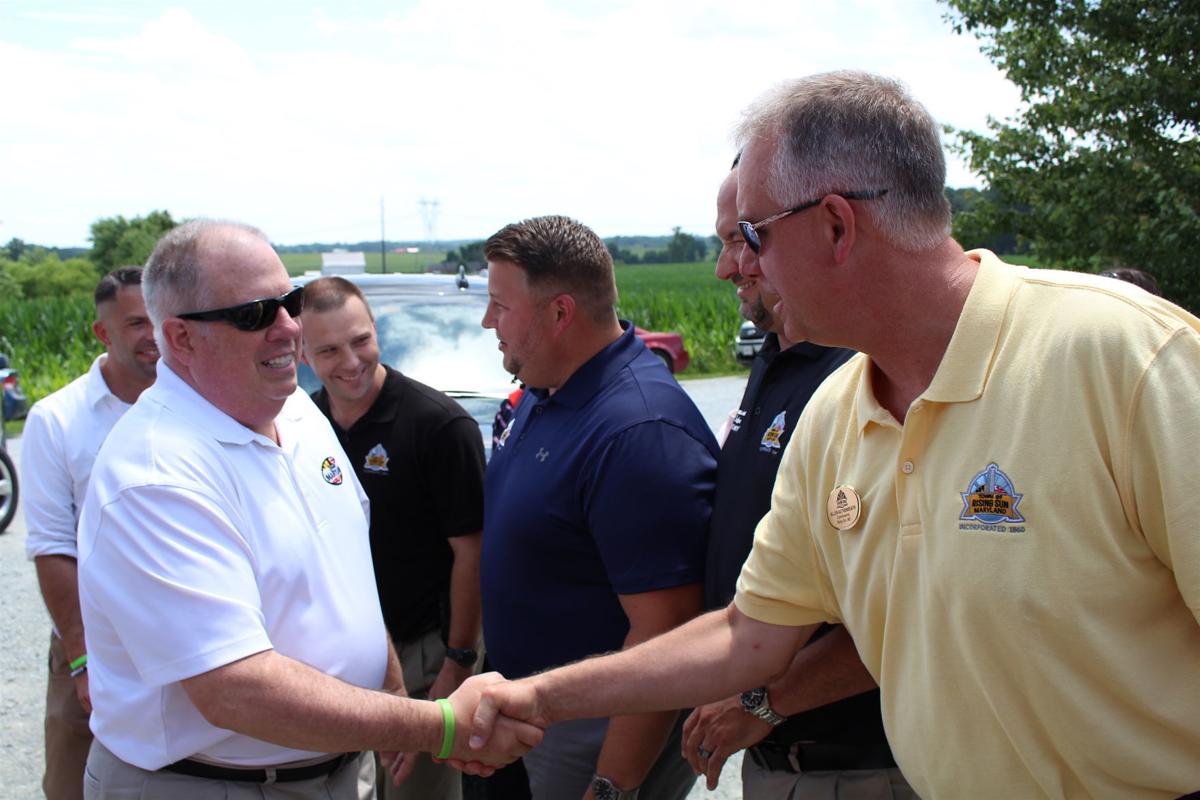 Gov. Larry Hogan shakes hands with Rising Sun Town Commissioner Allen Authenreath during a stop at Kilby Cream in Colora during a three-day July tour of Cecil County in 2016. Authenreath said the relationships he formed during his years in town government is one of the things he will miss.

Allen Authenreath, who resigned from the Rising Sun Board of Commissioners, said he hopes to be remembered for his role in bringing the Chester Water Authority interconnect to Rising Sun.

Gov. Larry Hogan shakes hands with Rising Sun Town Commissioner Allen Authenreath during a stop at Kilby Cream in Colora during a three-day July tour of Cecil County in 2016. Authenreath said the relationships he formed during his years in town government is one of the things he will miss.

RISING SUN — He’s been part of town government in some capacity since 2007, but Allen Authenreath is ending his service to Rising Sun by having submitting his resignation from office.

“I just didn’t want to turn in a letter of resignation,” Authenreath said. “I wanted to resign at the second town meeting in March but then COVID-19 changed all that.”

When the pandemic forced Maryland Gov. Larry Hogan to order most of the state to close to contain the spread of the novel coronavirus, Rising Sun closed its town hall and only recently resumed town meetings.

Authenreath and his wife Donna have moved to Delaware where they purchased her family home.

His term would have ended in October 2021.

”I am honored to have been able to work with Allen for six years,” said Mayor Travis Marion. “During those six years our town has seen a resurgence. Rising Sun has infrastructure in the ground, a state moratorium was lifted and we are officially open for business. Main Street is coming back to life, and we are having thousands of people attend community events we hold every year. Allen is apart of helping create that resurgence.”

Authenreath joined Rising Sun’s Planning and Zoning Commission in 2007. In 2009 and 2010 he narrowly lost election to the town board. However in 2011 when Debbie Craig resigned, Mayor Tom Mumey named Authenreath as her successor. Two months later he ran for the seat and lost to Joanne Osborne and Stephen Naughton.

“I did get some votes but a lot of people didn’t really know me,” he admitted. That was even though he and fellow candidate Skip Yust walked the entire town. “I did not feel like just because I lost I couldn’t work so I went back to planning and zoning.”

He won in 2014 in an election that also brought Dave Warnick to the board and elevated Travis Marion from commissioner to mayor.

“They called us the A&W Team,” Authenreath said of him and Warnick, referring to the popular root beer brand. That win, he said, was proof of the motto he embraced back in his high school athletics days. “Quitters never win and winners never quit. I felt I had a lot to offer.”

“He was a critical part of the successful completion of the water and sewer projects and a tireless advocate for the small business community in Rising Sun,” Warnick said. “He always had a measured and thoughtful response while being respectful of your thoughts and opinions. He could be swayed by a sound argument, qualities that are so painfully lacking in the current political climate of one-ups-man ship that we see in higher offices.”

Authenreath was part of the board when Rising Sun’s new orbal ditch wastewater treatment plant went into service in the summer of 2015. In on the negotiations for the water distribution line, Authenreath made the move from streets and sidewalks to being the commissioner of water and sewer. He feels that has become his legacy.

“Getting the new Chester Water Authority connection line to the finish line has my name all over it,” he said. “I told the mayor to switch me over to water and sewer and let me get this over the finish line.”

He also likes to think that he will be remembered as the commissioner who shepherded studies for traffic and streets and sidewalks in town.

While a lot was accomplished, he does have one regret.

“I would have liked to have gotten farther in the rails to trails project,” Authenreath said. That was part of a larger Cecil County and national movement to repurpose abandoned rail spurs and turn each into a network of walking, hiking and biking trails.

“I’ll particularly miss Allen’s support of causes in the Parks and Rec department, none more so than the work to get the Octoraro Rail Trail to fruition,” Warnick said.

Although he will miss the relationships he has formed during his almost 15 years in town, Authenreath says he won’t be a stranger.

“We got so close to many on our street. We were adopted grandparents to some kids,” he said. As an elected official he learned that even a quick trip for groceries could be waylaid.

“We’d go to Martin’s and people would stop me to talk and Donna would continue to shop,” he said. Eventually ending up at check out, he said Donna would let him know she was heading home with their food purchases and without him. “I would still be talking so I would just walk home.”

Whoever Marion names as his replacement for approval by the remaining board members, Authenreath offers some advice.

“First and foremost I was a resident and anything that happened in town hall affected me,” he said. That guided his decisions as chairman of P&Z and as a commissioner. “You need to protect the community against anyone looking to develop the town just to line their own pockets.”

Like children, he said the growth of Rising Sun should happen with care and concern.

“You want to make sure it makes good choices and has good values,” he said.

And to the residents of Rising Sun he urged involvement.

“Don’t stand on the sidelines and criticize. Come forward and get involved,” he said.

The mayor wished Authenreath the best in his retirement.

“He will be missed for his knowledge, his commitment and his belief like me that the best days for Rising Sun are the days ahead.”