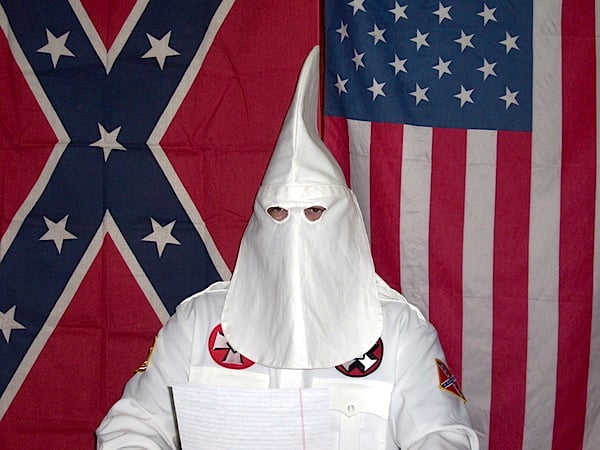 A KKK-affiliated group plans to hold a public meeting in Elkton on Friday, which its leader said will change impressions of the group. 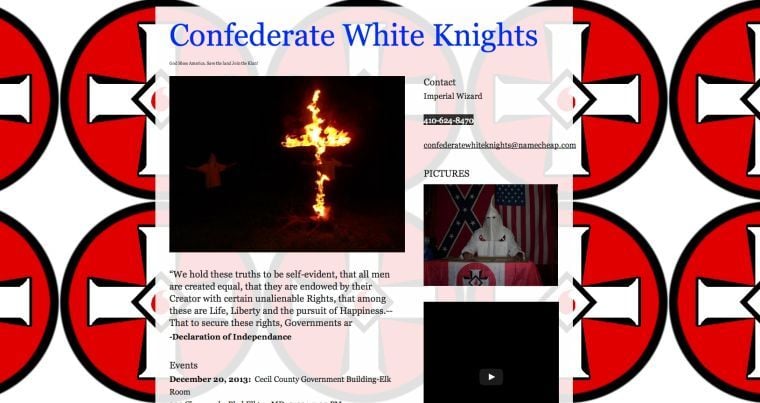 A screen capture of the Confederate White Knights website that publicizes a meeting at the Cecil County Administration Building.

A KKK-affiliated group plans to hold a public meeting in Elkton on Friday, which its leader said will change impressions of the group.

A screen capture of the Confederate White Knights website that publicizes a meeting at the Cecil County Administration Building.

ELKTON — A group with ties to the Ku Klux Klan will hold a public meeting Friday night in the Cecil County Administration building.

The Confederate White Knights have reserved the Elk Room for the 7 p.m. meeting, according to the group's website.

Richard Preston, imperial wizard of the 2-year-old group, said the meeting will focus on illegal immigration and President Barack Obama.

"Barack Hussein Obama is an illegal president," Preston said. "He needs to be removed from office. We also want 'Obamacare' shut down. It's against citizen's rights."

"On top of that, we want the laws toughened on immigration," he added. "We're flooded with illegal immigrants and our people can't find jobs."

Preston insists CWK is not about skin color.

"It's not about race. It's about America," he said. "It's time for the American people to stand up."

1st Sgt. Jimmy Russell, with the Maryland State Police's North East barrack, said the FBI has made law enforcement agencies aware of the group's presence and its intentions to hold a meeting.

"They said to expect from 40 to 200 people," he said. "They are not worried about (Preston). They are more worried about the people that could show up."

Preston previously held a "rally" in September at Antietam National Battlefield near Sharpsburg, however, at which only eight Klansmen, according to a Baltimore Sun report.

Al Wein, director of administration for Cecil County, cited the First Amendment right to peaceable assembly and free speech as the reason for giving CWK permission to use the meeting room.

"The First Amendment also prohibits local government from discriminating against an organization's right of free speech and peaceable assembly on public property, no matter how offensive the message may be," read a prepared statement from the county administration office.

Lt. Michael Holmes, spokesman for the Cecil County Sheriff's Office, said there will be a police presence Friday at the county building to maintain order.

The meeting is being held inside, Preston said.

"This is our first time as a meeting," Preston said. "We usually do rallies."

Besides the demonstration at Antietam, Preston organized a rally at Gettysburg Battlefield in Pennsylvania. He said he chose to hold the meeting in Cecil County because of its "conservative mindset."

"There's lots of good farmers and old people who understand if we don't straighten out, we're not going to be a country anymore," he said.

Preston aims to dispel the old image of the KKK, claiming his group is against Neo-Nazism and the National Socialist Movement. His Rosedale-based group is a combination of KKK groups from Delaware, Virginia and West Virginia.

The CWK website clearly spells out the requirements for joining the organization, including being 100-percent heterosexual of European heritage and neither Muslim, Jewish, Communist or Satanist.

"Just because we're a certain way in our group, doesn't mean we hate other groups," Preston said. "I think the people that do come will be surprised."

Why would you choose a symbol of hate and prejudice unless that was your agenda?

How embarrassing for Cecil County. I hope no one shows up, not even to protest bad genetics or low IQ.