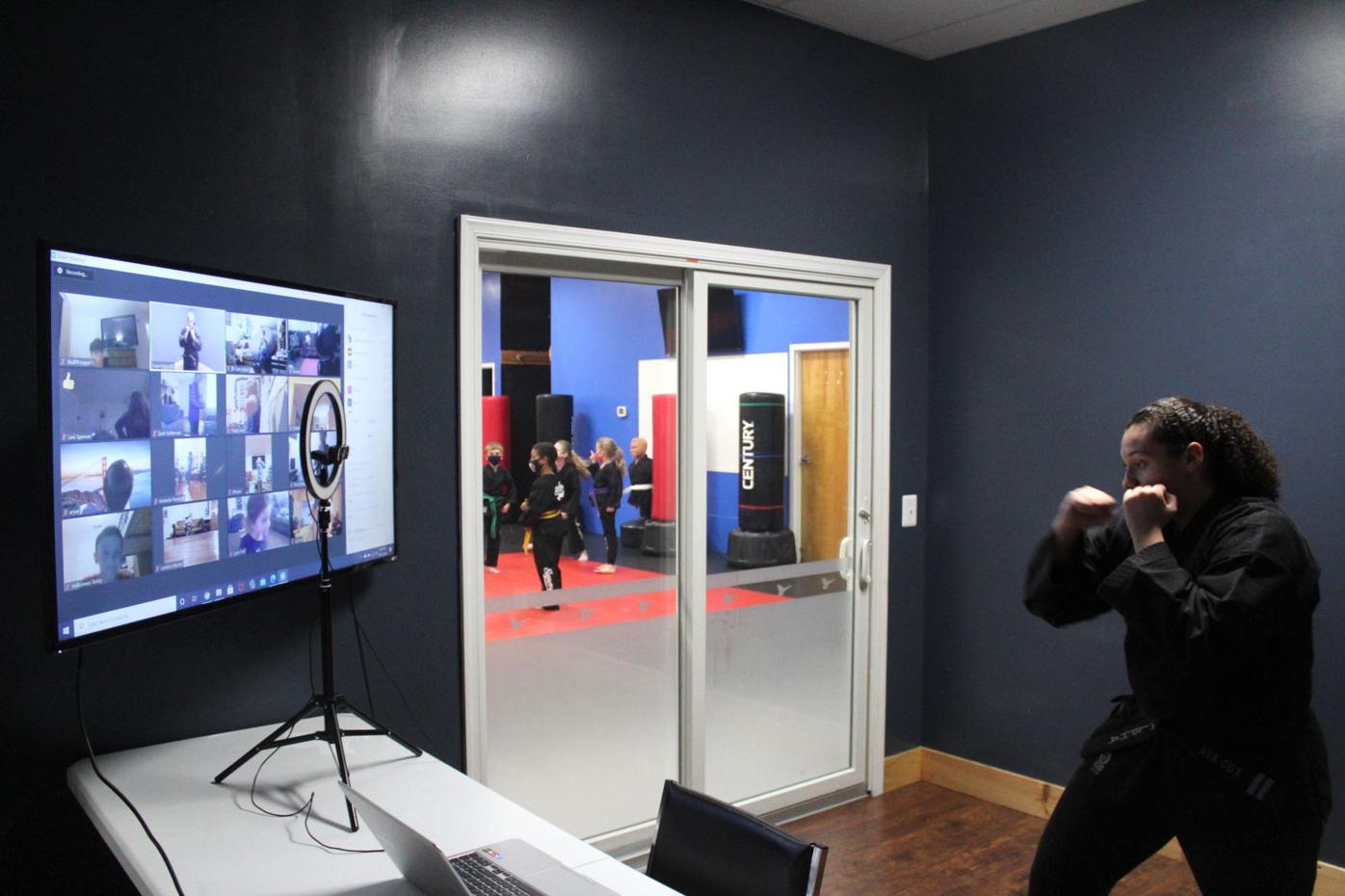 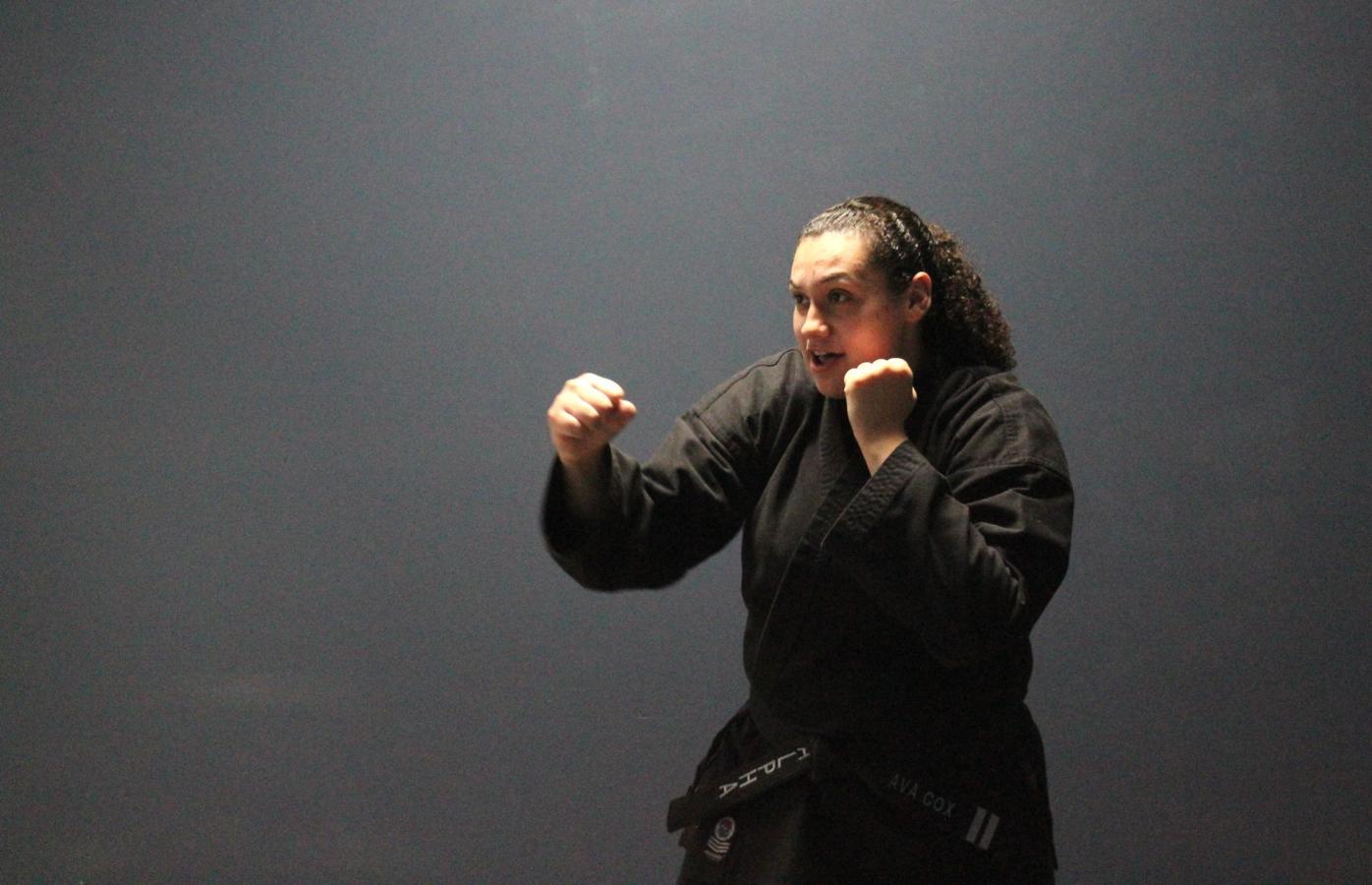 Ava Cox said that the social element of martial arts training is as important as the skills themselves, true years ago for her and even more so now. 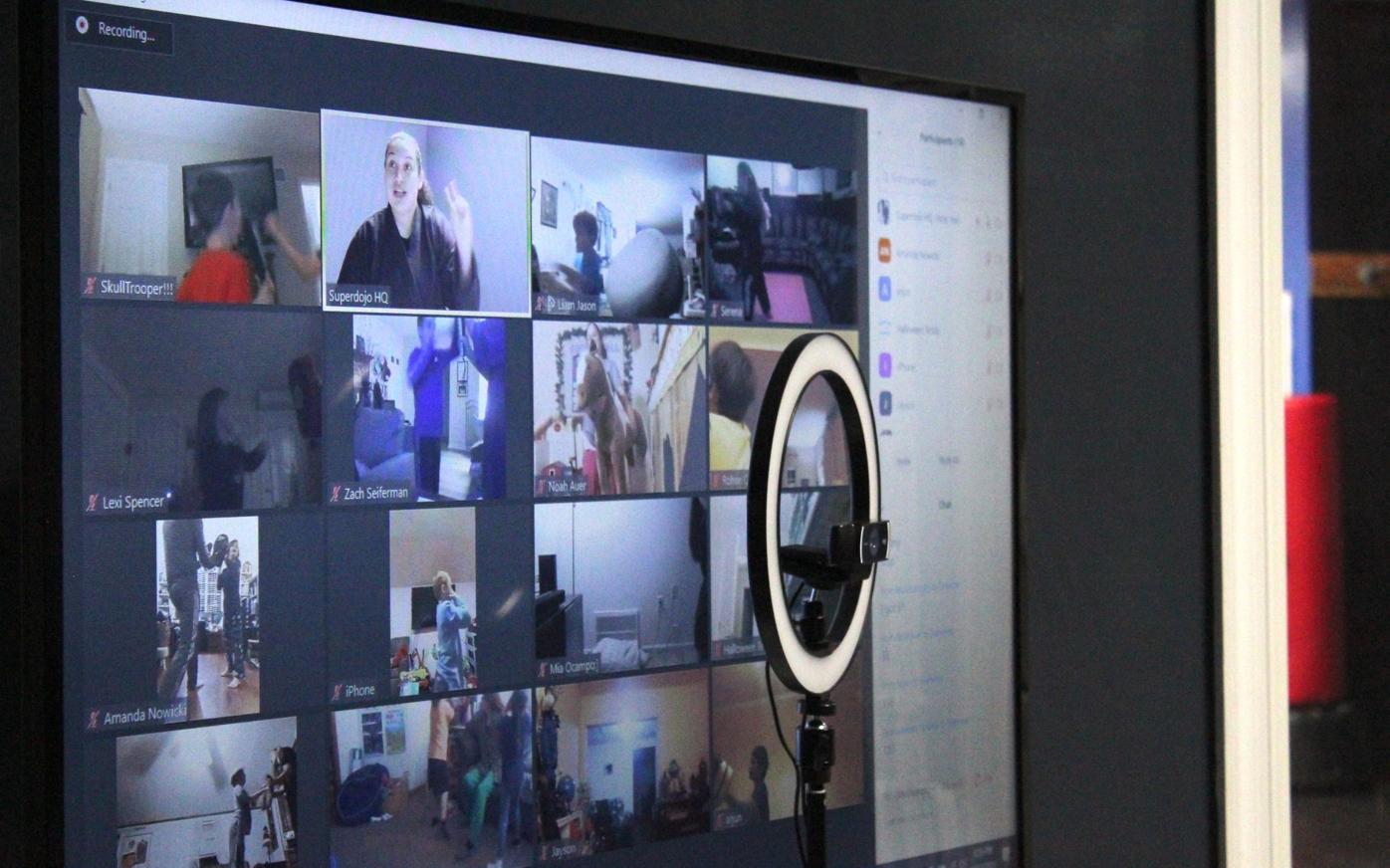 Out of almost 200 students, a typical virtual session might include about 15 who are not comfortable with in-person lessons.

Ava Cox said that the social element of martial arts training is as important as the skills themselves, true years ago for her and even more so now.

Out of almost 200 students, a typical virtual session might include about 15 who are not comfortable with in-person lessons.

Cox, a senior at Elkton High School, had just dismissed about 15 students who tuned in for a virtual session. Dubbed the ‘Queen of Zoom,’ Cox runs the virtual lessons which Superdojo began offering earlier this year to accommodate students who don’t feel comfortable returning to the studio in person.

She interjected the lesson with shouts of encouragement — “Great job, team! Keep it up!” — or told students to ‘lock it up,’ standing at attention while they watched her for instruction. At one point, she used Zoom’s ‘spotlight’ feature to let one student, Serena, model a form. “Who can do it like Serena?” she said.

At another point, she saw that Serena wanted to speak. “Hi Noah,” Serena said to Noah, another student on the Zoom call. Noah unmuted himself to say hi back. Cox smiled and said hi to Noah as well, and then got the lesson back on track.

Working with young people, she explained, comes naturally to her.

“I’d feel out of place if I wasn’t teaching kids,” she said. “This is what I love doing. I don’t see myself doing anything else in life.”

After training nearly all her life at Superdojo, Cox has worked her way up from student to volunteer to trainer. She first got into it because she loved Teenage Mutant Ninja Turtles and wanted to get the same skills under her belt.

Looking back on her early years at Superdojo, Cox said the social element was more important than the martial arts itself.

“I was such a shy kid, and after coming here I really learned how to talk to people,” she said. “Getting to know people that you don’t go to school with, or people that aren’t normally your friends and then talking to different parents — you really get to branch out.”

She chatted with the students for a few minutes after dismissing the lesson, congratulating one of them for getting a new baby sibling. Now more than ever, she said, providing that safe social space for kids to check in with friends they don’t get to see too often is important.

“It’s a virtual family,” she said. “Even though they can’t physically stand in front of each other to see each other or give each other high fives, there’s definitely a feeling of community.”

When Josh Hayhurst, the owner of Superdojo, first asked her to take the lead on the virtual lessons, she was nervous. She would miss the chatter, the high fives, the group camaraderie that forms during in-person sessions.

Soon after she started, though, she realized she would love it.

“I realized, ‘Ava, just teach. You know how to do this, just teach.’ So then I started just kind of doing it, and actually felt more comfortable,” she said. “And now it’s like, that’s my group. Those are my kids.”

Of the nearly 200 students enrolled at Superdojo, any of them can hop into one of Cox’s Zoom lessons. Some of her students only attend virtually, staying home due to safety concerns amid the COVID-19 pandemic. Others prefer it online because they can use the time they would spend driving to the studio working on homework.

She said that she upped her game on Zoom, learning the functions that would help her keep her students — most of which are in elementary school — engaged. Spotlighting is one of her favorite tools to help students learn from one another.

“I don’t have to show them everything,” she said. “If a kid knows how to do push ups — show it to me, and show everyone else how to do it. You be the teacher, and you lead.”

Parents are also encouraged to get involved. Toward the end of the lesson, Cox leads the students in a punching exercise — 30 seconds of quick strikes that maintain good form. Parents hold the pads.

Sometimes, Cox said, the parents get more excited than the kids. Moms often text her after lessons to tell her that they laugh as she cracks jokes and love the way she gets her students fired up.

“They love being involved,” Cox said. “Different parents parent in different ways, but in the end, we’re all just trying to make our kids better.”

Cox also plays soccer and basketball, and hopes to continue playing basketball in college, where she wants to train to be an elementary teacher. She’s open to the possibility of continuing to run Superdojo’s remote lessons, and thinks there’s room to grow the virtual program.

Cox said that she looks at it not as teaching, but as training a new wave of champions.

“Each generation is trying — not to one-up the last generation, but you’re trying to be the best that you can,” she said. “It’s up to us as the future generation to be leaders and to lead in the right way.”