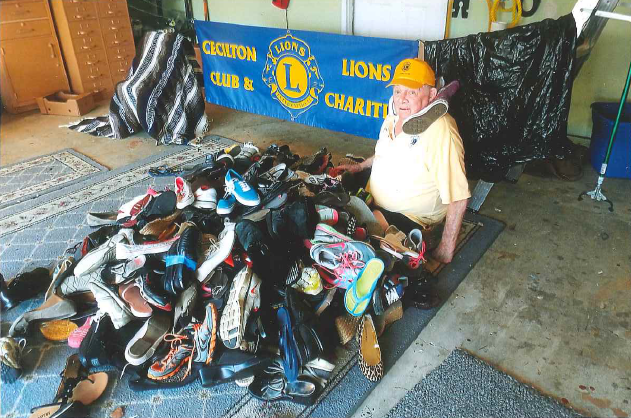 Cecilton Lions Club member Jack Magee posing with just a few of the 13,000 shoes he has collected over the years for those in need. 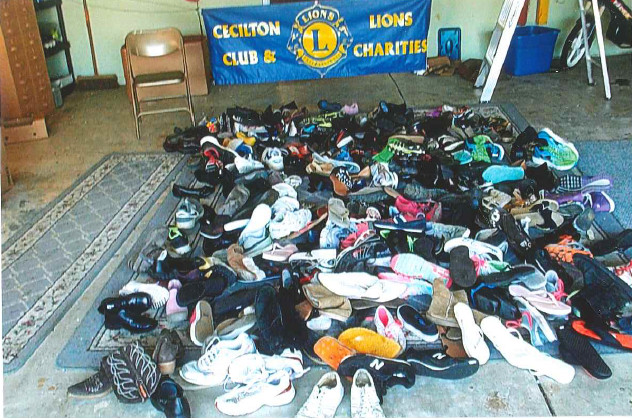 Just a few of the 13,000 shoes collected by Jack Magee and the Cecilton Lions Club as part of Operation Footsteps.

Cecilton Lions Club member Jack Magee posing with just a few of the 13,000 shoes he has collected over the years for those in need.

Just a few of the 13,000 shoes collected by Jack Magee and the Cecilton Lions Club as part of Operation Footsteps.

CECILTON — Cecilton Lions Club member Jack Magee has worked diligently for over a decade helping children all over the world by providing a gift many children in more affluent areas take for granted.

In 2007, Magee’s daughter Colleen told her father about a program called “Operation Footsteps,” which provides new and slightly used shoes to needy children and adults in countries in Africa, Central American, Europe, the Middle East and the U.S.

Magee was so touched by the program that he brought it to the attention of the Cecilton Lions Club and pressed club members to do something to help those in need. Based upon his desire and conversations with the club, Magee started a local version of the program in his garage in Earleville.

In setting up the program Magee was very active in getting out and spreading the word. Everywhere he went he told people about the program, as did his fellow Lions. The more word spread, the more shoes began showing up in Magee’s driveway.

Often, when Magee would leave home he would return to find bags of shoes everywhere. Bags blocking the door, backs stacked next to his truck.

A fellow Lion in Greensboro, Md heard about the shoe collection and also worked to collect shoes from his own community. To date, that Lions Club member has sent over 1,000 pairs of shoes to Magee for distribution. At a recent Lions dinner meeting, the President of the Cecilton Fire Company even took the shoes off of her feet and donated them, according to Magee.

As of press time, Magee and the Cecilton Lions Club have received over 13,000 shoes, not only from Maryland, but also from New Jersey, Pennsylvania, Delaware, North Carolina, South Carolina, Tecas, New York, Virginia and Florida.

According to the website, thousands children in poorer countries die annually from diseases, some of which are actually caused by parasites that enter the children through their feet. For Magee, this program is therefore not just providing shoes, but also saving lives.

For those interested in participating in the program you can donate used children/adult flat shoes, boots and sneakers in all sizes to St Paul’s United Methodist Church in Earleville or 123 Bay Blvd. in Earleville. You can also call 410-275-8426 or 856-981-7442.