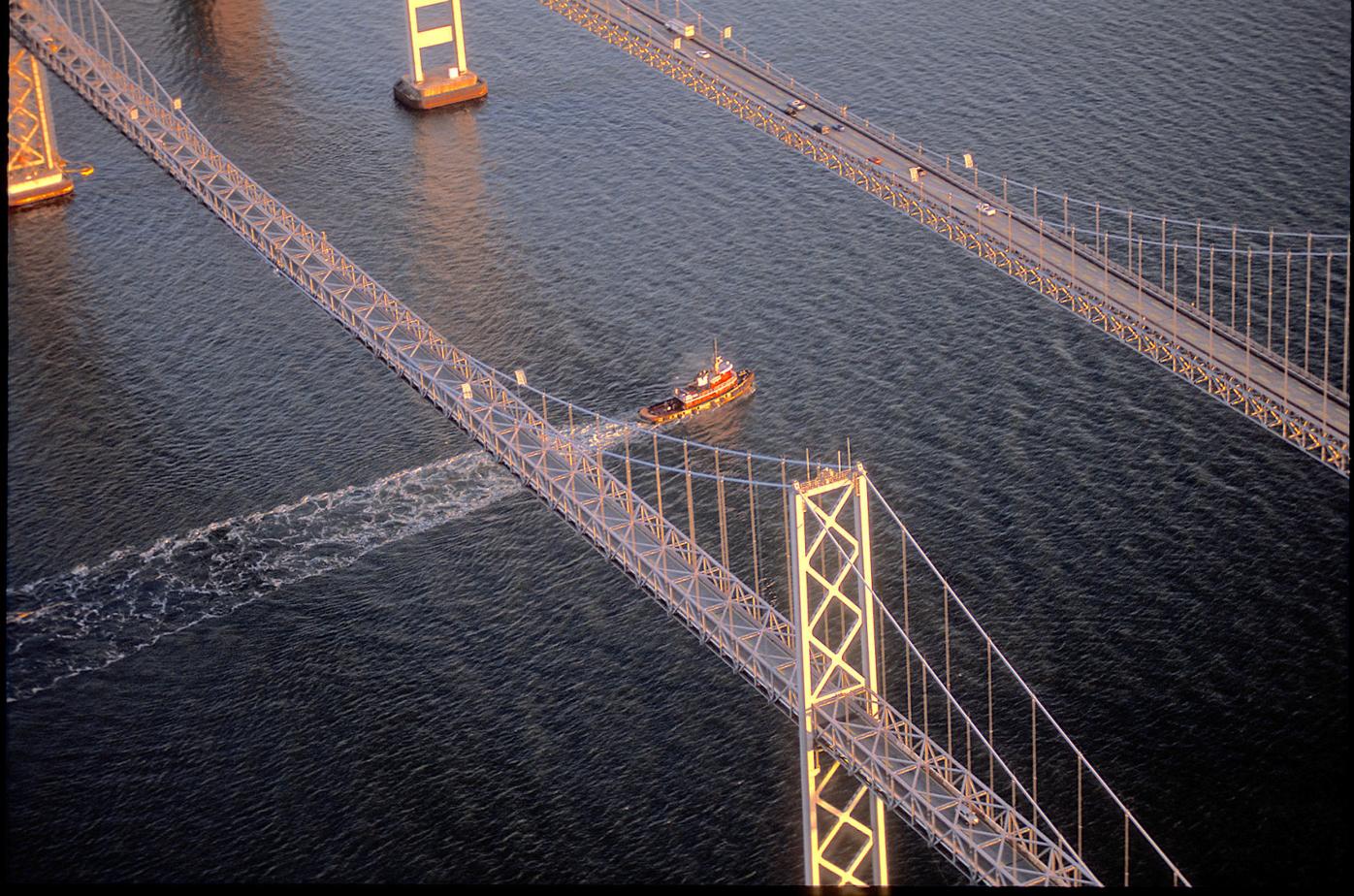 Headed north, likely to the Baltimore Harbor, a tugboat passes under the spans of Maryland’s Chesapeake Bay Bridge. 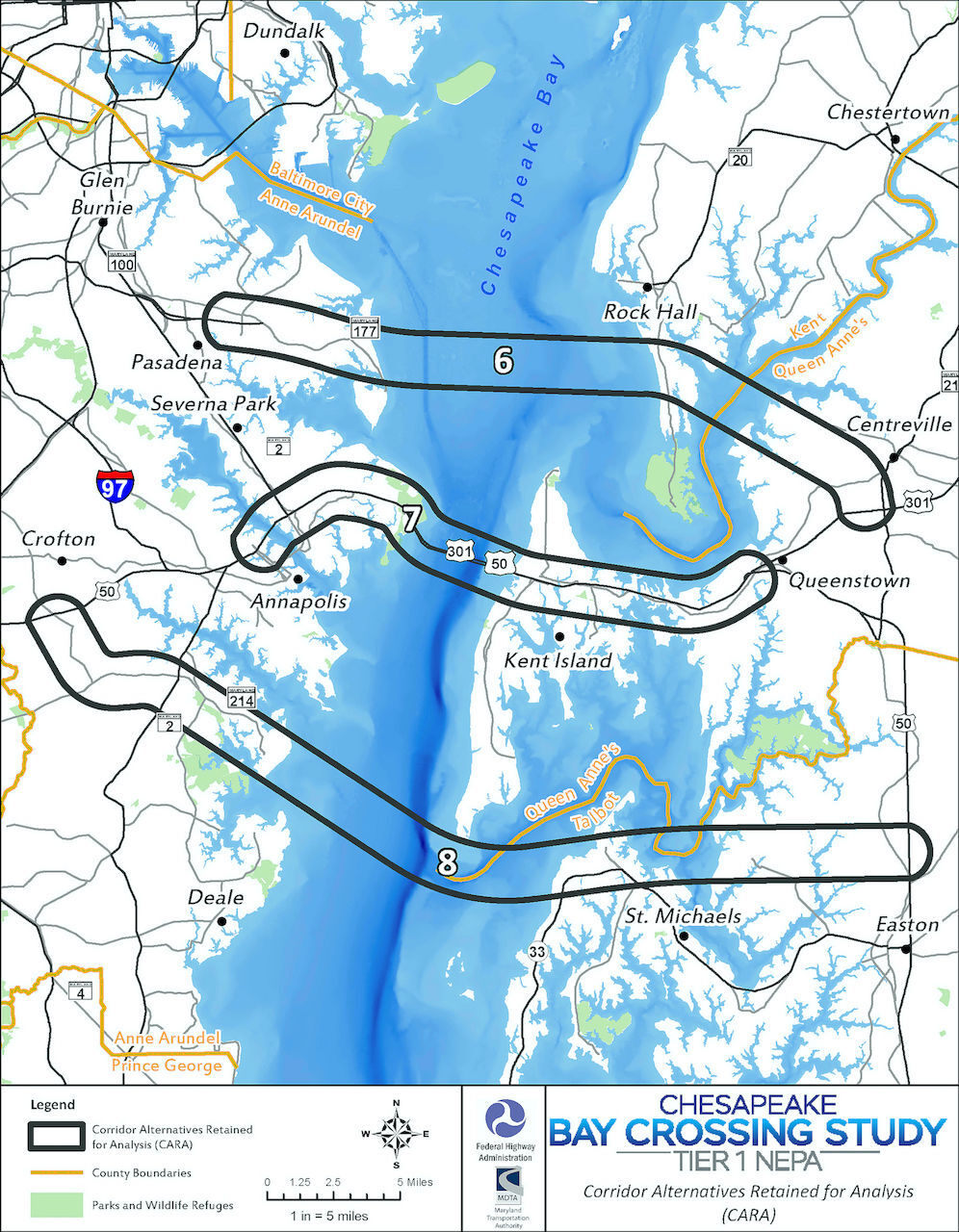 This map from the Bay Bridge Crossing Study shows the final three corridors under consideration by the Maryland Transportation Authority for a new bridge crossing. The MTA recently recommended building alongside the current parallel span (the middle option) from Sandy Point to Kent Island.

Headed north, likely to the Baltimore Harbor, a tugboat passes under the spans of Maryland’s Chesapeake Bay Bridge.

This map from the Bay Bridge Crossing Study shows the final three corridors under consideration by the Maryland Transportation Authority for a new bridge crossing. The MTA recently recommended building alongside the current parallel span (the middle option) from Sandy Point to Kent Island.

KENT ISLAND — Maryland transportation officials have recommended building a new Chesapeake Bay Bridge at the site of the existing two spans that cross between Annapolis and Kent Island.

The project will cost from $5.4 billion to $8.9 billion, depending on which construction strategy and methods are chosen. But a preliminary study concludes that the new crossing will prevent increasing traffic volumes from causing gridlock on the state’s lone connection to the Eastern Shore across the Bay.

The Maryland Transportation Authority, which operates the existing 4-mile toll bridge, released the long-awaited findings Feb. 23 in a draft environmental impact statement. The $5 million study had been scheduled for release in December 2020, but officials delayed the rollout amid a spike in COVID-19 cases, fearing it might suppress public comment.

Transportation Authority officials say building in the existing corridor minimizes environmental impacts as well disruption to rural communities on the Eastern Shore. But many environmentalists question the need for a third crossing at all, saying that officials are overestimating projected traffic growth between the two halves of the state.

“The very worst environmental damage may be avoided with this alternative,” said Erik Fisher, a land use planner with the Chesapeake Bay Foundation. “However, the need for the bridge expansion may not be as great as it was before the pandemic given all the changes with telework and travel. We encourage the state to account for these changes and take a more serious look at adding transit on the bridge.”

Two adjacent bridges, known collectively as the William Preston Lane Jr. Memorial Bay Bridge, currently cross the Bay in Maryland — a two-lane eastbound span constructed in 1952 and a three-lane westbound span that opened beside it in 1973. The segments form part of U.S. Routes 50/301.

Jim Ports, the Transportation Authority’s executive director, disputed claims that COVID-19 will have long-lasting effects on the way people travel. As a result, a new bridge will be needed down the road.

“People tend to gravitate back to the normal,” he said. “I would suggest by 2040, most people will have pretty much forgotten about COVID.”

The Transportation Authority began its study with 14 potential corridors spread across more than 100 miles, from the northern tip of the Bay to the Virginia border.

Those were narrowed down to three options. From north to south, the possible routes would cross the Bay from Pasadena to Centreville; from the existing bridge site from east of Annapolis, near Sandy Point State Park, to Kent Island; or from the Mayo Peninsula in Anne Arundel County to near St. Michaels in Talbot County. A “no-build” option also was considered.

Neither the Pasadena-Centreville nor the Mayo-St. Michaels routes would divert enough traffic away from the existing bridge to keep them from becoming overwhelmed with traffic during peak times in 2040, according to the study’s estimates.

With no improvements, the existing spans are projected to carry 135,300 vehicles on a typical summer weekend day in 2040. By running a new crossing at the same location, the estimated total falls to 79,700, a 40% decline. This was by far the largest decline among the 14 possible corridors, the study found.

The costs for a new crossing parallel to the existing spans assume adding 5 to 7 new lanes. The study leaves it for future determination whether the added capacity will come solely from a new bridge or will be achieved by widening one or both of the existing bridges.

The report identifies the existing crossing location as the “preferred corridor alternative.”

That option is likely to have fewer environmental impacts, according to the study. That’s because the water crossing is shorter than its counterparts, and the route can take advantage of existing land-based infrastructure.

But there are some environmental downsides.

Constructing another crossing at the present location might take a bigger toll on park spaces versus the two other alternatives. It could impact as many as 14 public parks and recreational facilities, including the popular sunbathing destination of Sandy Point State Park, according to the analysis. The number of impacted parks is projected to be eight along the northern route and 10 along the southern route.

Officials say it is likely that the final alignment, whichever route is selected, can be drawn to avoid many of those potential park conflicts.

The current bridge corridor also faces a bigger threat from climate change than the other options. Within the two-mile-wide study area along the existing 50/301 highway, about 5% of the land is “susceptible” to sea level rise by 2050, the analysis found. The highest-risk areas are on the Bay shore of Kent Island and along Kent Island Narrows on the east side of the island.

With the two other routes, the study estimates that only about 1% of the land is so imperiled.

The state analysis agrees with many of the project’s detractors that the northern and southern routes would almost certainly bring more development to the Eastern Shore. Because the road network is thinner along the northern and southern routes, new access roads probably would be needed, according to the report’s authors. They also envision subdivisions popping up in the rural region, with residents using the new bridge to commute across the Bay to Baltimore and Washington.

But if the new crossing is built near the two existing bridges, it will have to overcome pushback from residents and elected officials on the western side of the Bay.

Patricia Lynch is president of the Broadneck Council of Communities, a coalition of neighborhood groups rooted on the peninsula east of Annapolis. As she sees it, additional lanes of traffic along the corridor won’t result in smoother travels — it will be quickly offset by greater demand.

“A lot of people don’t go to the beach because the traffic is so horrendous,” Lynch said.

A hundred miles to the southeast, Ocean City’s hotels, restaurants and other tourism-dependent businesses continue pushing state officials to alleviate the backups that bedevil the trip across the Bay. For residents of Baltimore or the Washington metro, there are only two ways to reach the oceanfront resort: Route 50 or a roundabout journey through the northeast corner of the state and down through Delaware.

“If it becomes so burdensome to navigate that path, it outweighs their experience here,” said Lachelle Scarlato, executive director of the Greater Ocean City Chamber of Commerce. “We never want that to be the case.”

Gov. Larry Hogan has thrown his support behind the middle option, tweeting in 2019 that it would “maximize congestion relief and minimize environmental impact.”

To Lynch, the governor’s comments signaled that the routing decision was made “several years ago.” Then, in her eyes, the environmental impact statement confirmed it with its endorsement of the Bay Bridge route.

Ports, the Transportation Authority head, argues that’s not the case. “(Hogan) has his opinion and so do a lot of other people. But it’s not part of our own decision-making process,” he said.

Since 1980, the annual number of vehicles crossing the bridges has soared from 10 million to 27 million, according to the report. With no changes to the bridges, typical weekday traffic is expected to increase by 23% by 2040, while summer weekend day traffic will grow by 14% in those two decades.

A recent analysis funded by the Queen Anne’s Conservation Association, an Eastern Shore environmental group, suggests those projections are inflated. That report argued in part that the state’s weekend traffic estimates are based on the measurement of one day of traffic in August, when traffic is significantly heavier than a typical summer weekend day.

Ports said he was unable to comment on the group’s findings because they haven’t been shared with him. But the report’s overall conclusion left him scratching his head.

“My question back to them would be, ‘Are they denying we have a congestion problem today, especially in the summer months?’” Ports said. “As I recall, we seem to get a lot of complaints about congestion from the Anne Arundel side as well as the Queen Anne’s side.”

Critics also have pointed to the coronavirus pandemic as a reason to reconsider the span. The virus and resulting lockdowns have upended the way people live and work, with many telecommuting and choosing vacations closer to home.

The Transportation Authority rejected incorporating any pandemic-related effects in its report.

“At this time, there is no definitive traffic model that would predict how the pandemic will affect long-term traffic projections,” the authors wrote. “However, we will continue to track trends in travel behavior and traffic volumes as our communities, businesses, places of worship, and schools begin to reopen, and (we will) consider new information as it becomes available.”

Bridge opponents have pushed the state to consider other modes of travel to get people across the Bay.

In the 244-page report, the authority outlined four potential alternatives to a bridge: electronic no-stop tolling, a ferry service, bus rapid transit and a new rail line. The agency eliminated all of those as stand-alone options and permanently nixed any consideration of a rail line, which it deemed prohibitively expensive.

The remaining alternatives, however, will continue to be analyzed as possibilities implemented in combination with each other, or with the new bridge, if the effort moves forward. And the change to electronic tolling is already under way.

To get public feedback, the Maryland Transportation Authority will hold in-person meetings 6 to 8 p.m. April 21 at the DoubleTree by Hilton at 210 Holiday Court in Annapolis and 6 to 8 p.m. April 22 at the Kent Island American Legion Hall at 800 Romancoke Road in Stevensville. Witten comments can be submitted any time through May 10 at https://www.baycrossingstudy.com/public-involvement/deis-submit-comments.

To view the environmental impact study and other project documents, visit baycrossingstudy.com.

To get public feedback, the Maryland Transportation Authority will hold in-person meetings 6 to 8 p.m. April 21 at the DoubleTree by Hilton at 210 Holiday Court in Annapolis and 6 to 8 p.m. April 22 at the Kent Island American Legion Hall at 800 Romancoke Road in Stevensville.

The public is encouraged to testify. If you wish to provide testimony, visit baycrossingstudy.com to register. If you cannot access the project website, call 1-877-249-8370 to register.

Written comments can be submitted any time through May 10 at https://www.baycrossingstudy.com/public-involvement/deis-submit-comments.

“My question back to them would be, ‘Are they denying we have a congestion problem today, especially in the summer months?’ As I recall, we seem to get a lot of complaints about congestion from the Anne Arundel side as well as the Queen Anne’s side.”