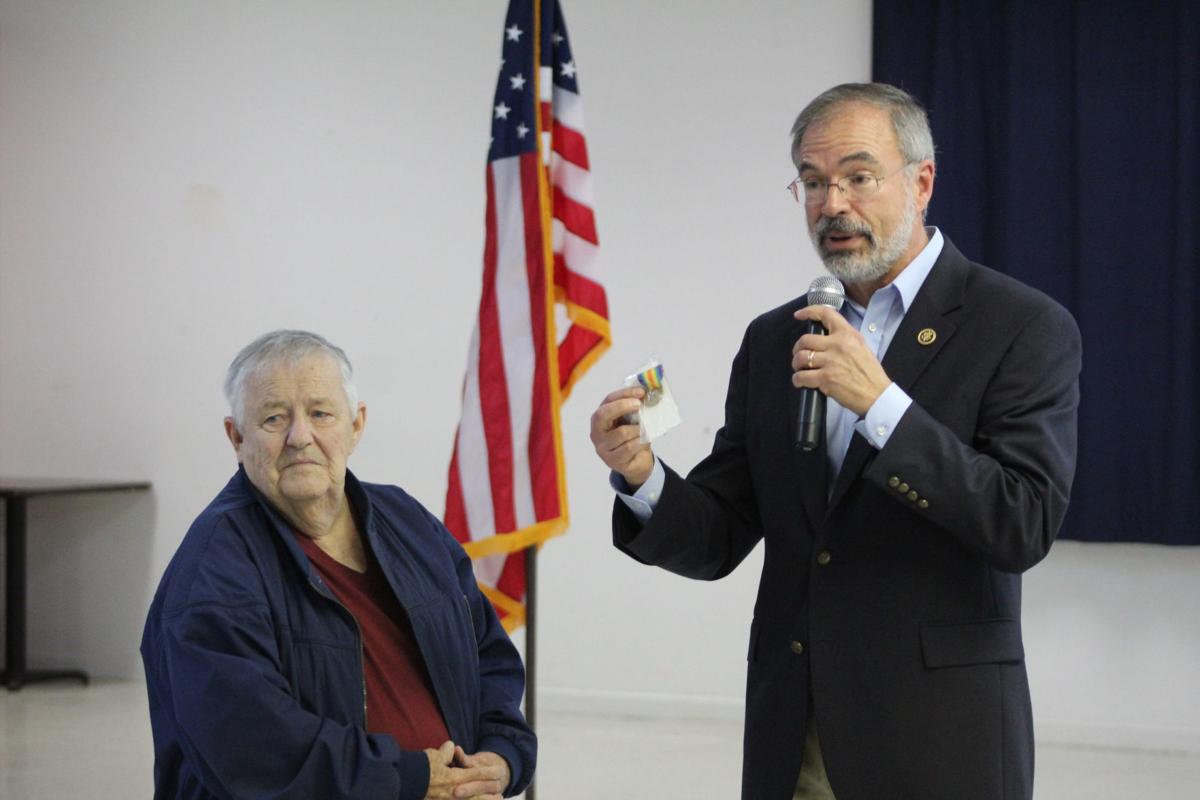 Donald Huppman Sr. accepted the World War One medals awarded posthumously to his father, Edmund Henry Huppman, in November from Rep. Andy Harris. As memorial Day approaches Huppman said he is still learning about his father and the sacrifices he made as a member of the US Army. 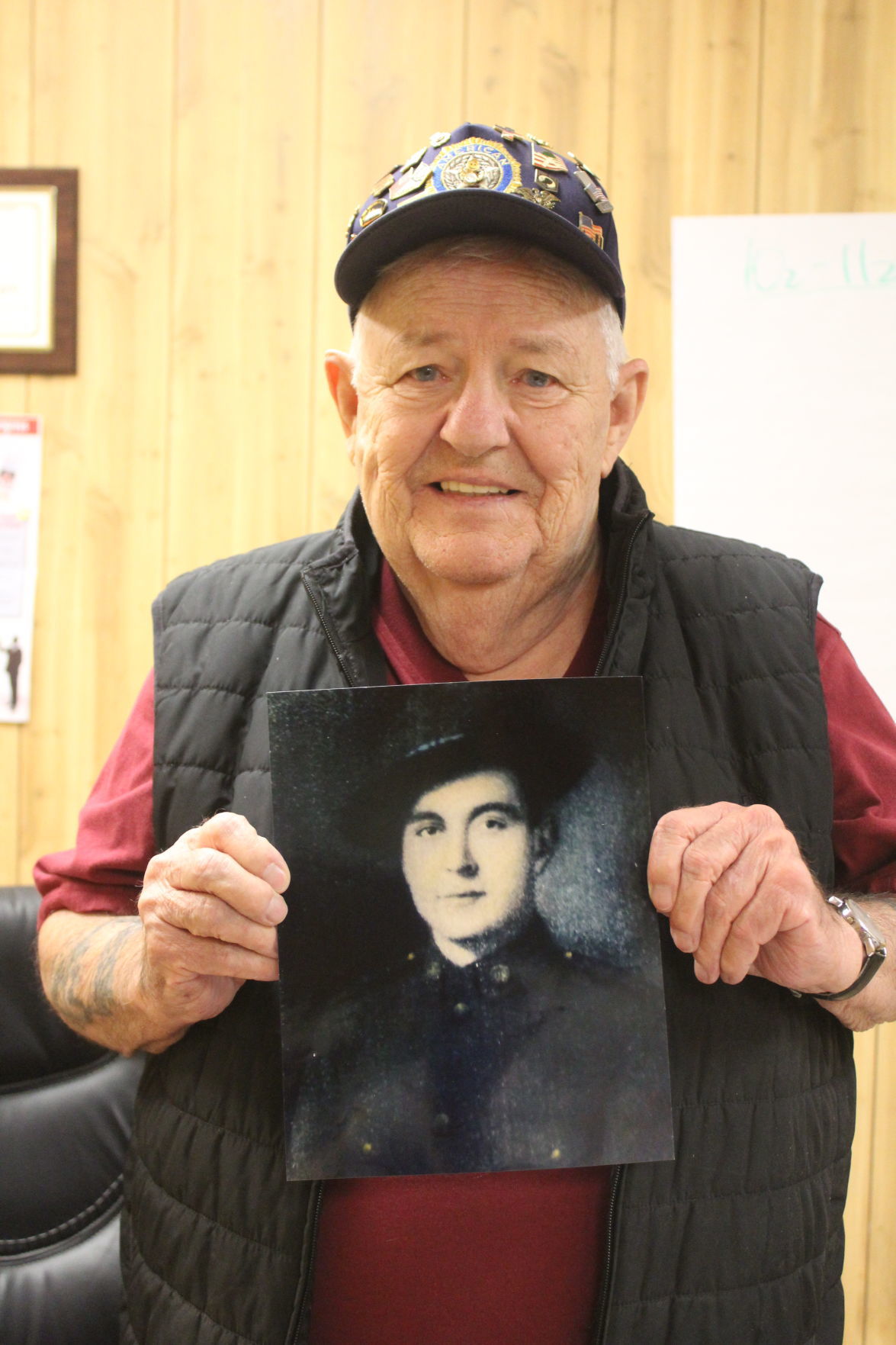 Donald Huppman Sr. poses with one of the few photos he has of his father, whom he never met because of the elder Huppman’s struggle with shell-shock. 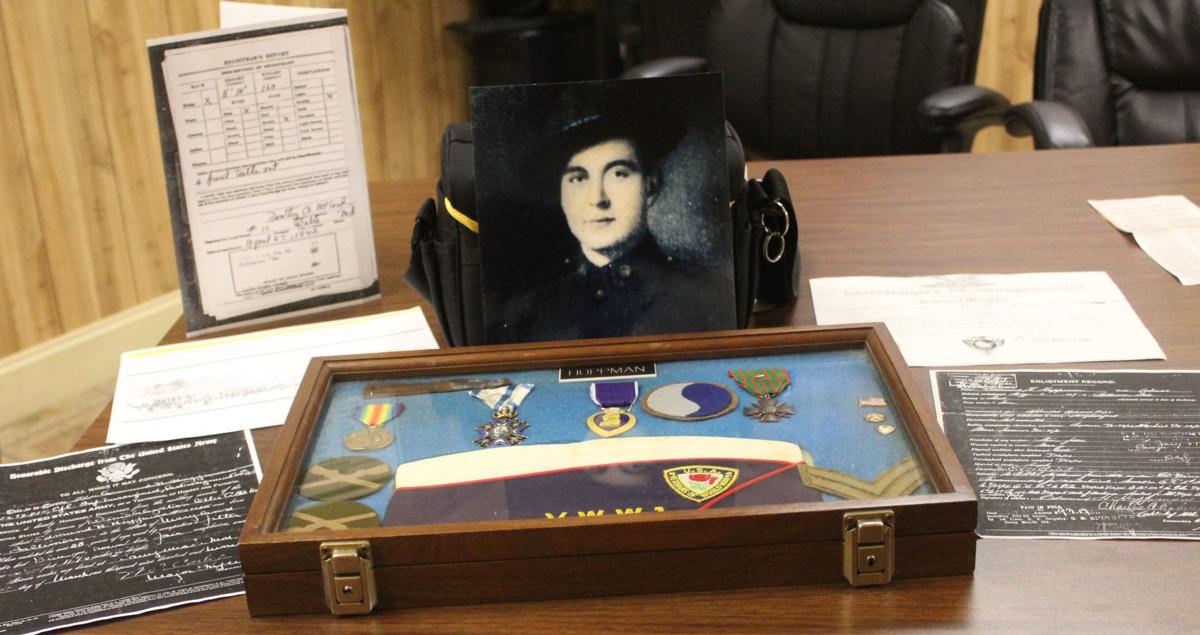 Donald Huppman Sr. treasures the case holding mementos of his father’s service in World War One including his Victory Medal and the Serbian Order of St. Sava.

Donald Huppman Sr. accepted the World War One medals awarded posthumously to his father, Edmund Henry Huppman, in November from Rep. Andy Harris. As memorial Day approaches Huppman said he is still learning about his father and the sacrifices he made as a member of the US Army.

Donald Huppman Sr. poses with one of the few photos he has of his father, whom he never met because of the elder Huppman’s struggle with shell-shock.

Donald Huppman Sr. treasures the case holding mementos of his father’s service in World War One including his Victory Medal and the Serbian Order of St. Sava.

ELKTON — Today the world is familiar with the term “PTSD” or post-traumatic stress disorder. Associated primarily with veterans of military actions, it’s a term used to describe the after-effects of having witnessed or been a victim of a tragedy.

During the Civil War it was called “soldier’s heart.” By the arrival of World War I it had been dubbed “Shell Shock.” That’s what happened to Edmund H. Huppman. A member of the US Army’s 110th Machine Battalion, Huppman was a machine gun operator. He was part of the American forces at the Battle of the Argonne Forest, which resulted in a total of 350,000 casualties. Barely into his 20’s Huppman saw and heard a lot during that war, which left him permanently traumatized.

“The only thing I knew of my dad was he was at Perry Point in the hospital all those years,” Donald Huppman Sr., from Elkton, said. The youngest of five children, Huppman was never allowed to visit his father on the advice of doctors at Perry Point. “The whole family told me he got shell shocked.”

He knew little else.

Decorum of that era meant Edmund was not spoken of in polite company and Donald never knew him. In fact, he only saw his father one time, and that was when the elder Huppman died and was lying in repose.

However his children, now grown, knew that Donald needed to know something about his father. Donald Huppman Jr. and his sister, Deborah Hirsch began to search for any information that could be found on their grandfather. Hirsch used her skills in genealogy to find his military service records.

What they learned was Edmund Huppman fell into a very small group of soldiers during that horrific war who was awarded The Serbian Order of St. Sava medal for meritorious service.

“Only 19 were awarded in World War One by the Serbian government,” Hirsch said.

Donald accepted his father’s medals from Rep. Andy Harris in November ahead of the congressman’s town hall meeting.

“He got the Victory Medal with the names of all the allied countries on it and the WWI service pins,” she said. Her dad has them in a dignified wooden case with a glass covering. He also carries a somewhat foggy copy of the only photo he has of his dad in uniform, along with photocopied records and items found online. His discharge papers indicated Edmund had no injuries from the war.

“But his life was changed,” she said, noting that the only thing between her grandfather and a traumatic brain injury was a thin metal helmet. “His wounds surfaced between 1940 and 1954.”

He spent the remainder of his life at Perry Point.

“We found his certificate of death with this really weird note on it,” Hirsch said. Written on it was “The person who will always know who you are” and a reference to an Uncle Frank.

Like his father, Donald Huppman served in the military. He was in the Navy for four years, taking basic training at Bainbridge Naval Training Center in Port Deposit.

“I was in the drum and bugle corps,” he said. The Navy taught him how to play drums and he would perform. “Playing drums on the field was my favorite part of Bainbridge.”

He been married to wife Patricia almost 65 years.

“I bought her rings at Bainbridge. She still wears them,” he said. They’ve raised five children, including daughters Donna Thompson, Patti Ryan and Nancy Hofmann, together and are enjoying their 8 grandchildren and 9 great grandchildren.

Unlike Edmund, Donald was able to come home, hold a job and raise his family, unscathed by war.

“The tragedy in this is my grandfather left this world never knowing the kind of man his son turned out to be,” Hirsch said. She calls him an attentive father and grandfather who has been involved in their lives. “My father’s battle has been to prove he was going to be OK.”