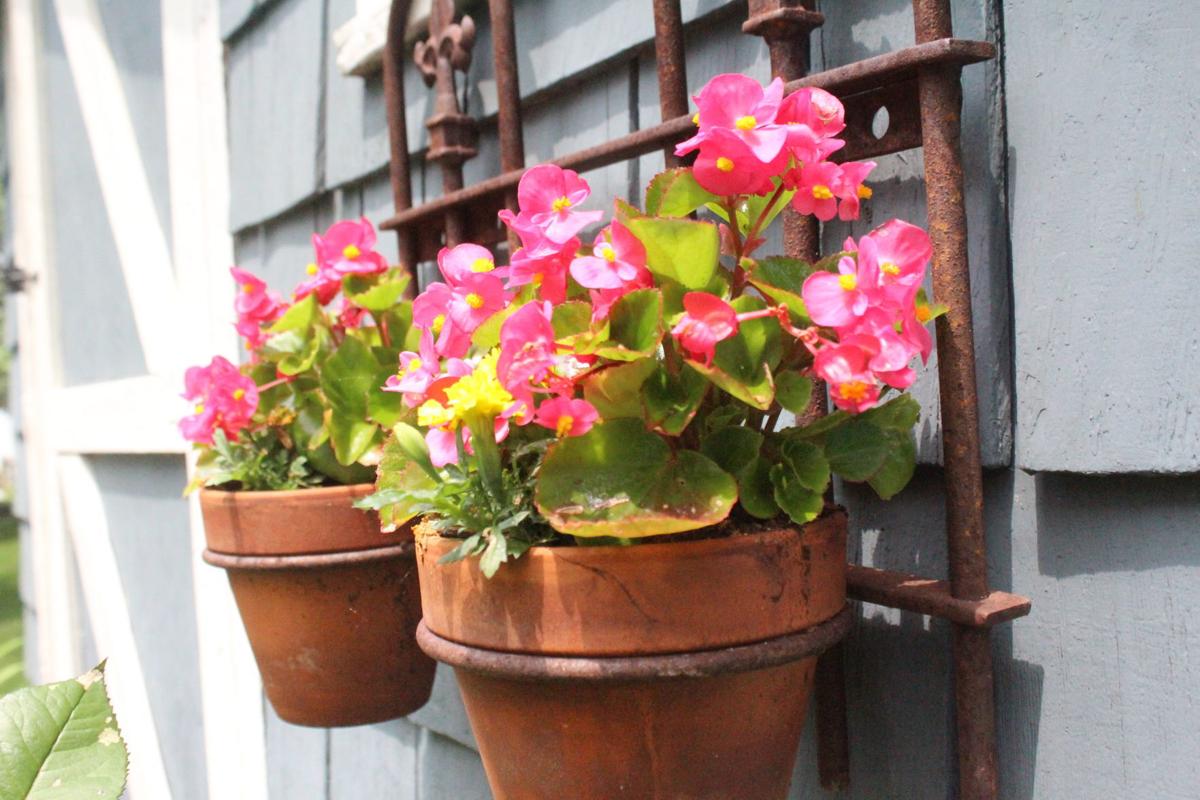 Potted plants hang on the side of a shed on Justine Roecker’s property. 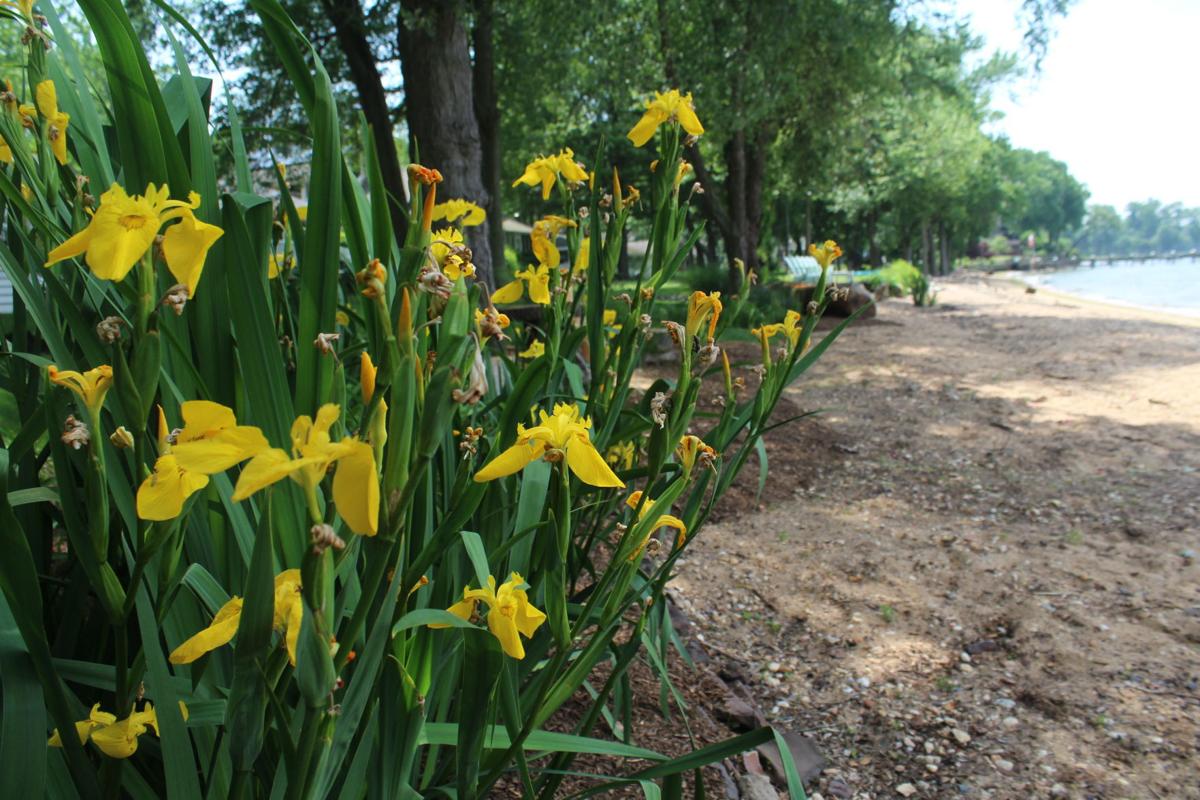 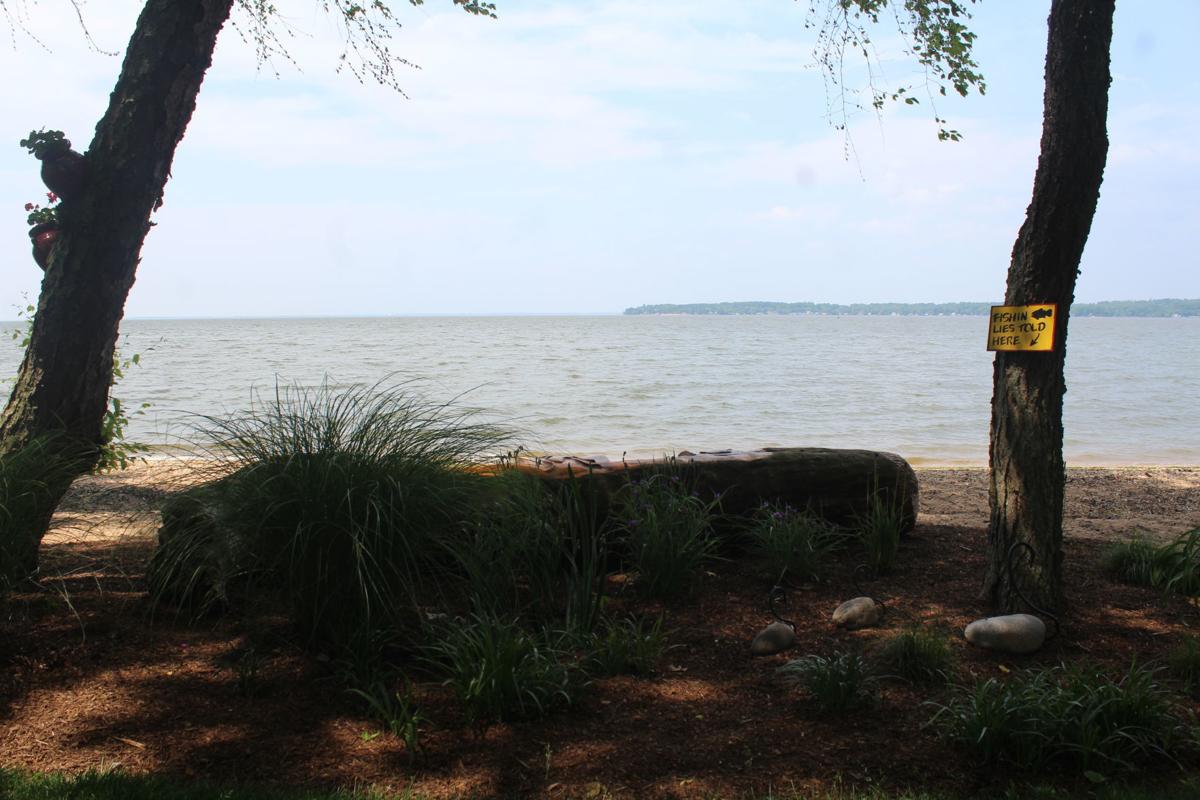 Justine Roecker’s husband carved this bench out of a tree that washed ashore, providing the perfect place to sit and look out at the Northeast River. 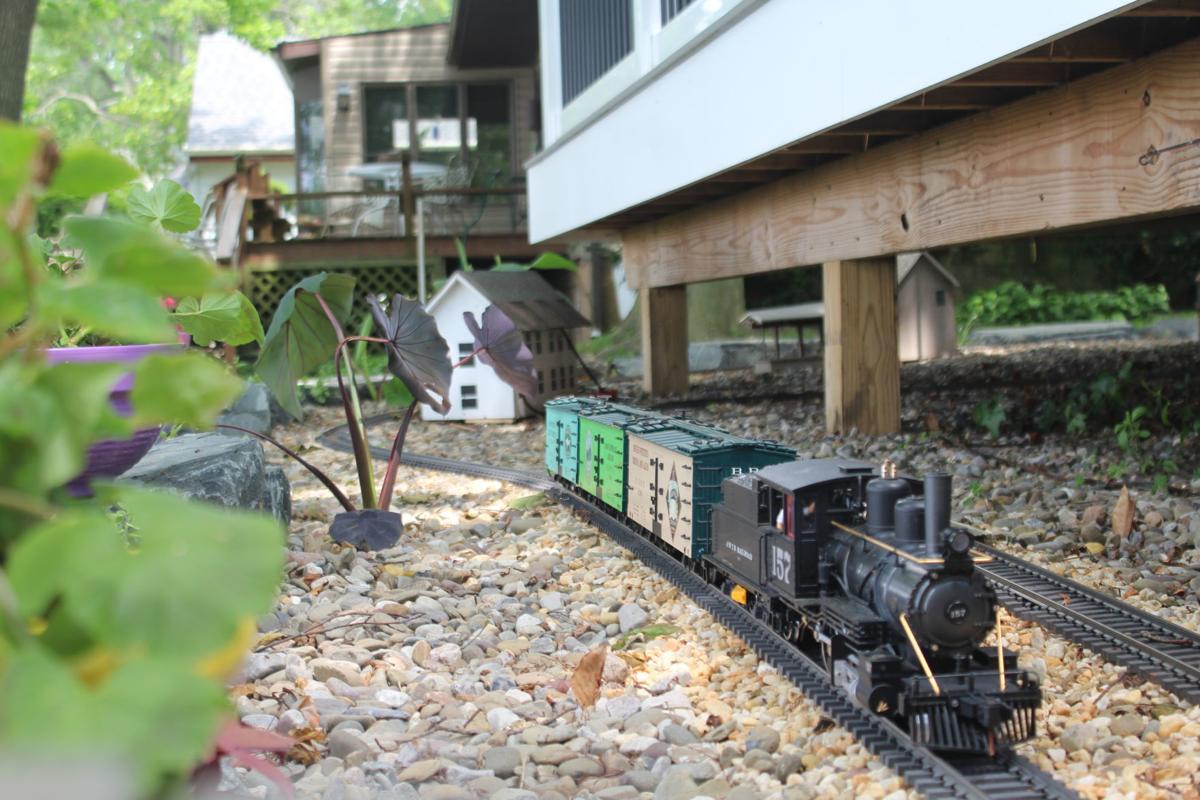 A train, which Justine Roecker calls her “husband’s pride and joy,” weaves through part of their garden. 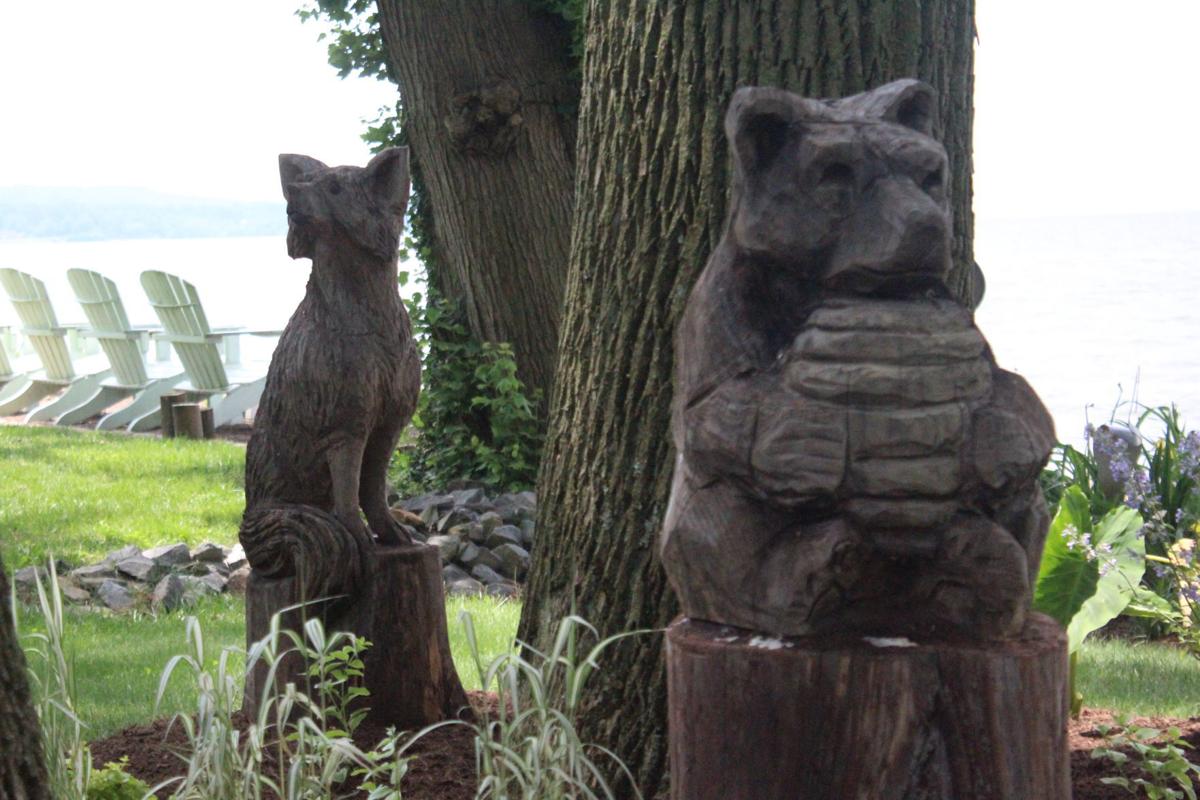 These carvings of a fox and bear in Justine Roecker’s garden were created by chainsaw artist Marty Long. 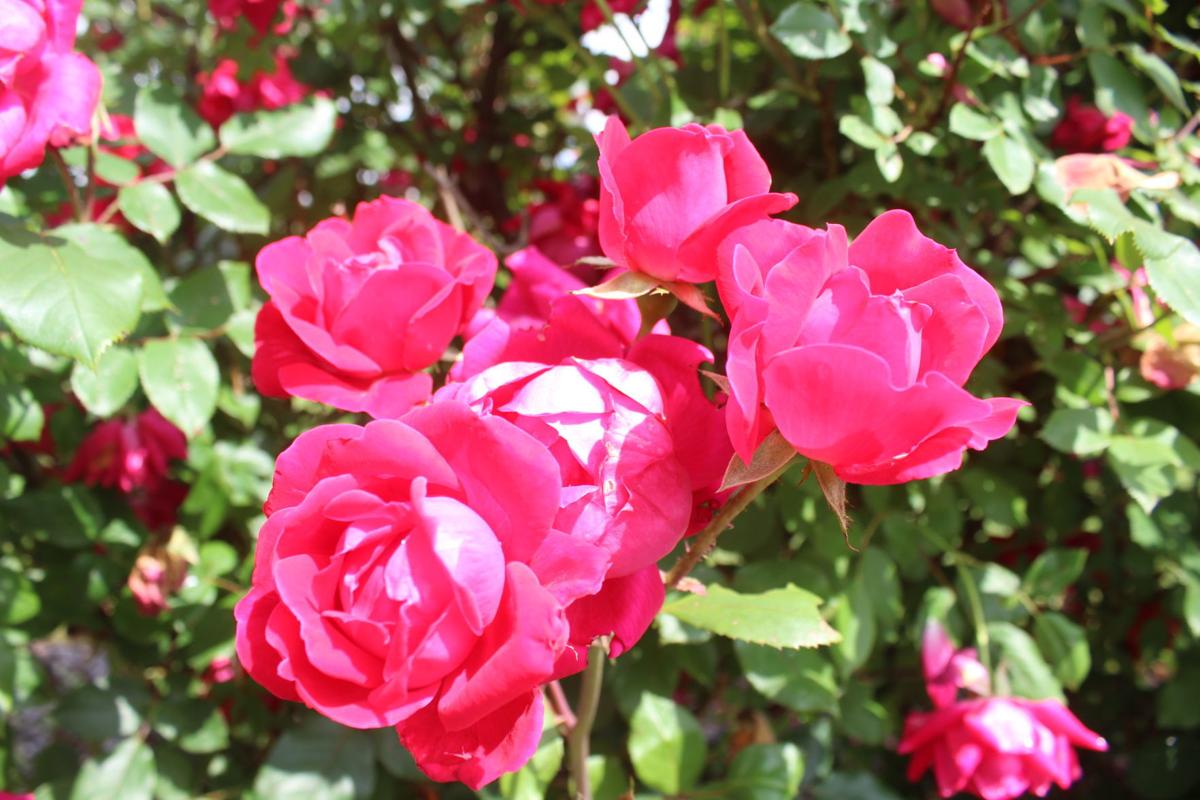 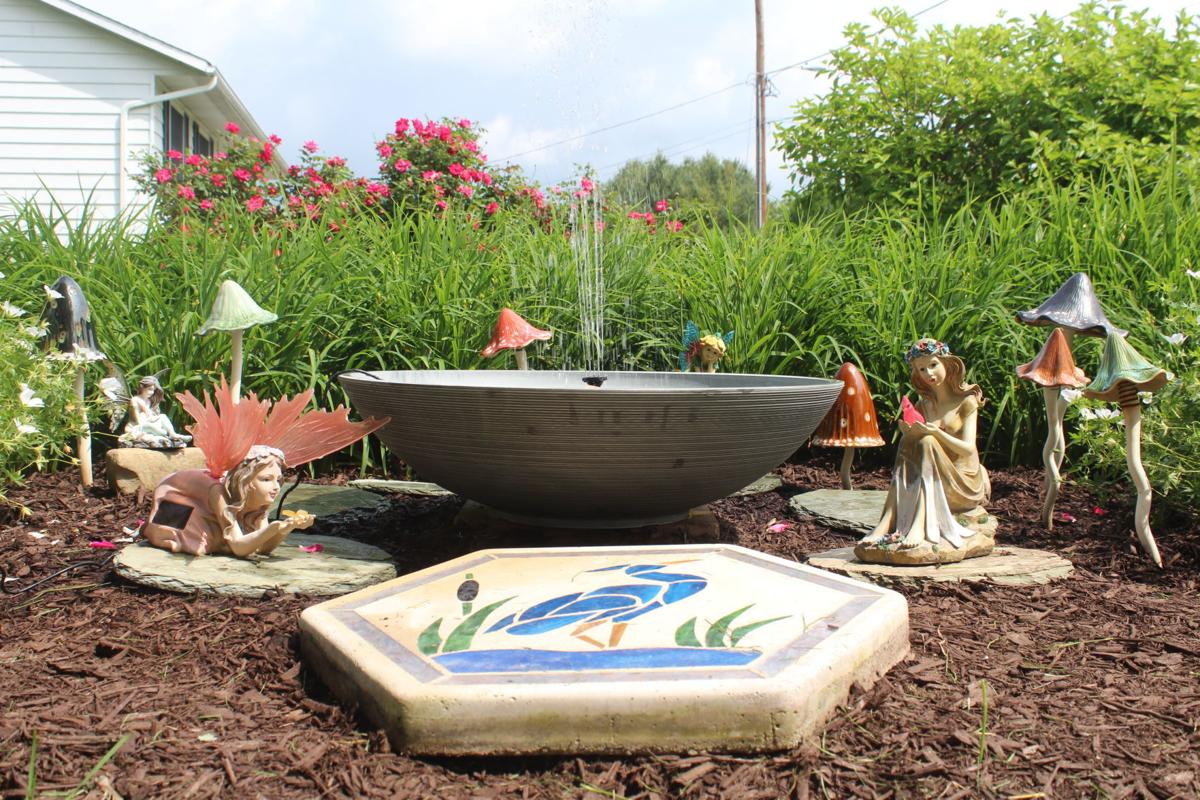 This fountain, surrounded by ceramic fairies and mushrooms, sits in Lee Makie’s garden. 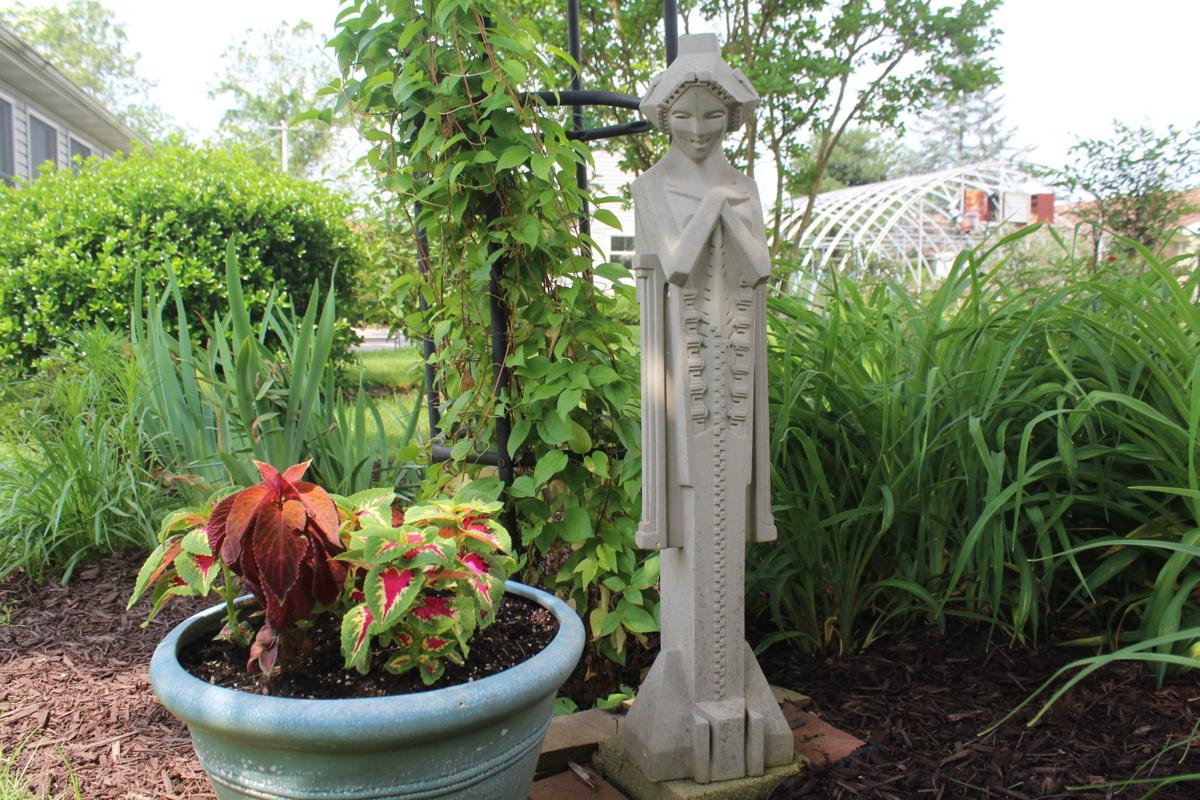 A pot of coleus sits next to a recreation of one of Frank Lloyd Wright’s sprite statues in Lee Makie’s garden. 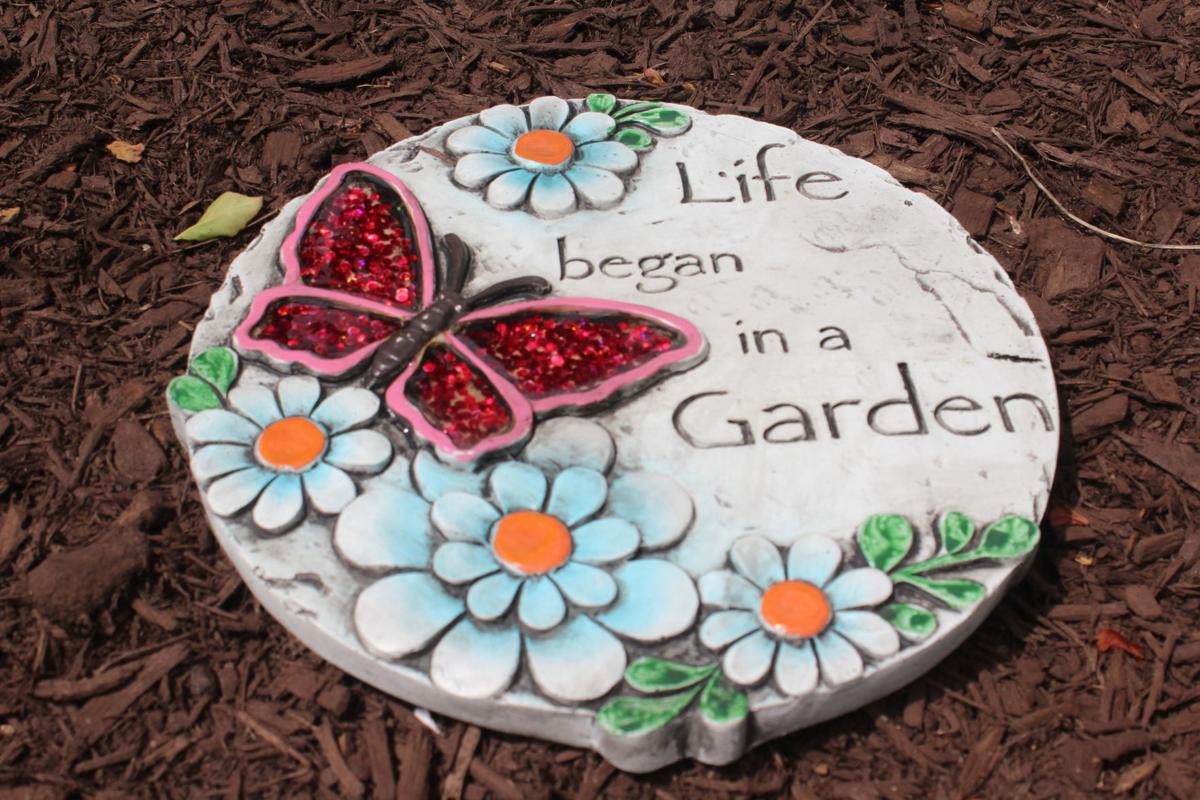 A stepping stone, adorned with a butterfly, flowers, and the phrase “Life began in a garden,” sits in Lee Makie’s garden.

Potted plants hang on the side of a shed on Justine Roecker’s property.

Justine Roecker’s husband carved this bench out of a tree that washed ashore, providing the perfect place to sit and look out at the Northeast River.

A train, which Justine Roecker calls her “husband’s pride and joy,” weaves through part of their garden.

These carvings of a fox and bear in Justine Roecker’s garden were created by chainsaw artist Marty Long.

This fountain, surrounded by ceramic fairies and mushrooms, sits in Lee Makie’s garden.

A pot of coleus sits next to a recreation of one of Frank Lloyd Wright’s sprite statues in Lee Makie’s garden.

A stepping stone, adorned with a butterfly, flowers, and the phrase “Life began in a garden,” sits in Lee Makie’s garden.

NORTH EAST — With summer at our doorstep, the Women’s Civic League of North East will once again host its annual Secret Garden Tour from 9 a.m. to 4 p.m. Saturday, June 8.

Now in its 12th year, the tour will feature eight gardens throughout the North East area. Purchased in advance, tickets cost $15 per person and are available at the North East Town Hall, as well as Cathy’s Corner and Silver & Sassy on Main Street in North East. Tour-goers can also purchase tickets the day of the event for $20 per person at St. Mary Anne’s Episcopal Church.

Proceeds from the tour will go to support the North East Branch Library as one of the civic league’s primary focuses is the promotion of literacy, according to Donna Bitely, a member of the Women’s Civic League of North East.

“With the new library being built, our efforts of course are to raise as many funds as we can to help with the costs to fund that library,” Bitely said.

Though her garden will not be featured in this year’s tour since the local deer decimated her hostas, Bitely is an avid gardener who inherited her green thumb from her mother.

“My mom passed away a number of years ago, and she had a home up in Rochester, N.Y. She had a beautiful hydrangea bush, so we took cuttings from that and each one of my siblings took the cuttings,” she said. “Now I have a number of hydrangeas from her hydrangeas, so that’s kind of neat to look at those and remember that they came from her garden.”

When Bitely and her husband moved to North East in 1991, they were attracted to their current property by the garden that the homeowner before them had planted.

“We just kind of fell into place and picked up where she left off,” Bitely said. “We’ve always enjoyed gardening. My mom did it when I was young and it just kind of carried over.”

Bitely said she is fortunate to have a partner who loves gardening as much as she does.

“Luckily my husband enjoys it as well because I know you have a lot of situations where one person enjoys it and the other person couldn’t care less and doesn’t want to help with it. But luckily I’ve got a husband who’s very accommodating,” she said.

Here are three of the gardens that will be featured in this year’s tour.

A participant in the civic league’s garden tour for five or six years, Justine Roecker said a big motivator for her opening her garden to the public is the fact that the money raised through the tour goes to the town library, which she said is “near and dear to my heart.”

With a home on the Northeast River, Roecker’s waterfront garden provides a view of the waterway, plenty of plants such as irises and grasses, and various decorations.

A train, which Roecker called her “husband’s pride and joy,” runs under their back deck and around a part of the garden. The garden is also home to two carvings of a bear and a fox created by chainsaw artist Marty Long, whom the couple met at the Cecil County Fair.

Roecker said it’s gratifying to plant new things and see how they grow.

“I enjoy the satisfaction of putting something in the earth and it doesn’t look very good then, or it’s a seed or a bulb so you see nothing at all, and then watching it grow,” she said. “It’s kind of like having faith that stuff is going to come up and do well. It’s an affirmation.”

In particular, Roecker enjoys nurturing plant cuttings that she has received from fellow gardeners.

“That’s lovely to have someone give you something from their garden and put it in the ground and see what it does,” she said.

With the tour coming, Roecker is looking forward to sharing one of the hidden gardens of North East with the public.

“I think we’ve worked kind of hard on it and it’s nice to share it with folks and let them see a different kind of garden … The tour is very near and dear to me because North East is a fabulous community and this showcases parts of North East that you maybe wouldn’t get to see,” she said.

This will mark Mary Harrison’s first year serving as a host on the garden tour.

Preparing for the tour was Harrison’s chance to reflect on her garden and simple beauties it offers.

“You just take things for granted when you’re here,” she said.

Like Roecker, Harrison also has a waterfront garden. But Harrison’s garden takes on a more tropical theme.

“It’s a mixture of perennials and annuals, and I have my pool decorated very tropical. We’re on the waterfront, so basically the land speaks for itself,” she said.

Harrison finds joy in experimenting with the configuration of the garden each year.

“I’ve just always liked plants … It’s just fun moving things and watching them bloom, and then next year I think I’ll move it someplace else,” she said.

Lee Makie’s garden has been through several evolutions since her daughters moved away.

“We had a swimming pool in the back and when my girls all were grown and out of here I said ‘That goes’ and I put the garden in,” she said.

After her husband passed away in 2001, Makie has continued to redo the garden herself. She said gardening is one of her favorite hobbies.

“It’s one of my second best fun things to do,” she said, adding that her first favorite thing to do is travel — the latter hobby often conflicting with the former as she cannot leave her plants unattended for too long.

While she used to grow tomatoes and other vegetables, Makie sticks to flowers now.

For Makie, gardening is a good way to decompress.

“It is a nice stress reliever … You go out, you putter around in there, you weed and then [you get to enjoy] the results,” she said.

Visitors can expect to see a good bit of color from Makie’s garden.

“A lot of the colors are going to be coming from annuals and pots of things that I have sitting around,” she said.

Although some of the plants don’t stay forever, Makie has learned to make the most of them in the time that they are here.

“I enjoy it while it lasts,” she said.