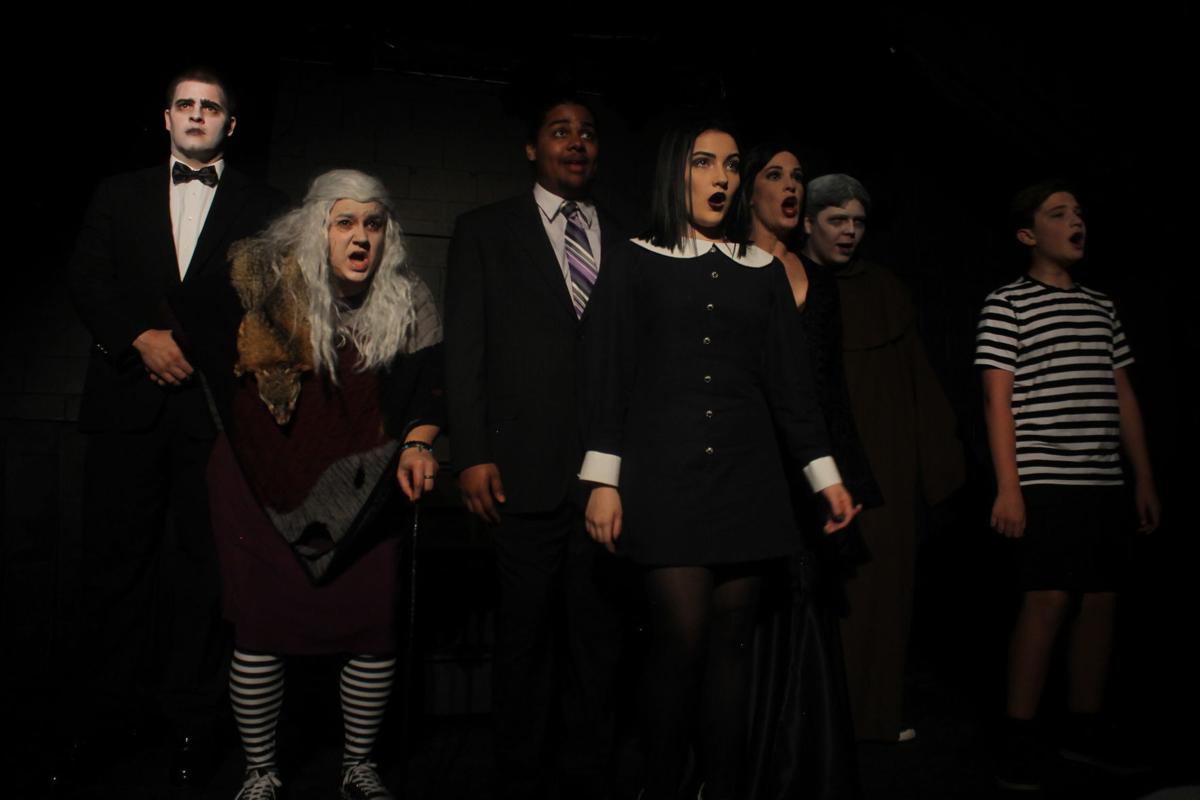 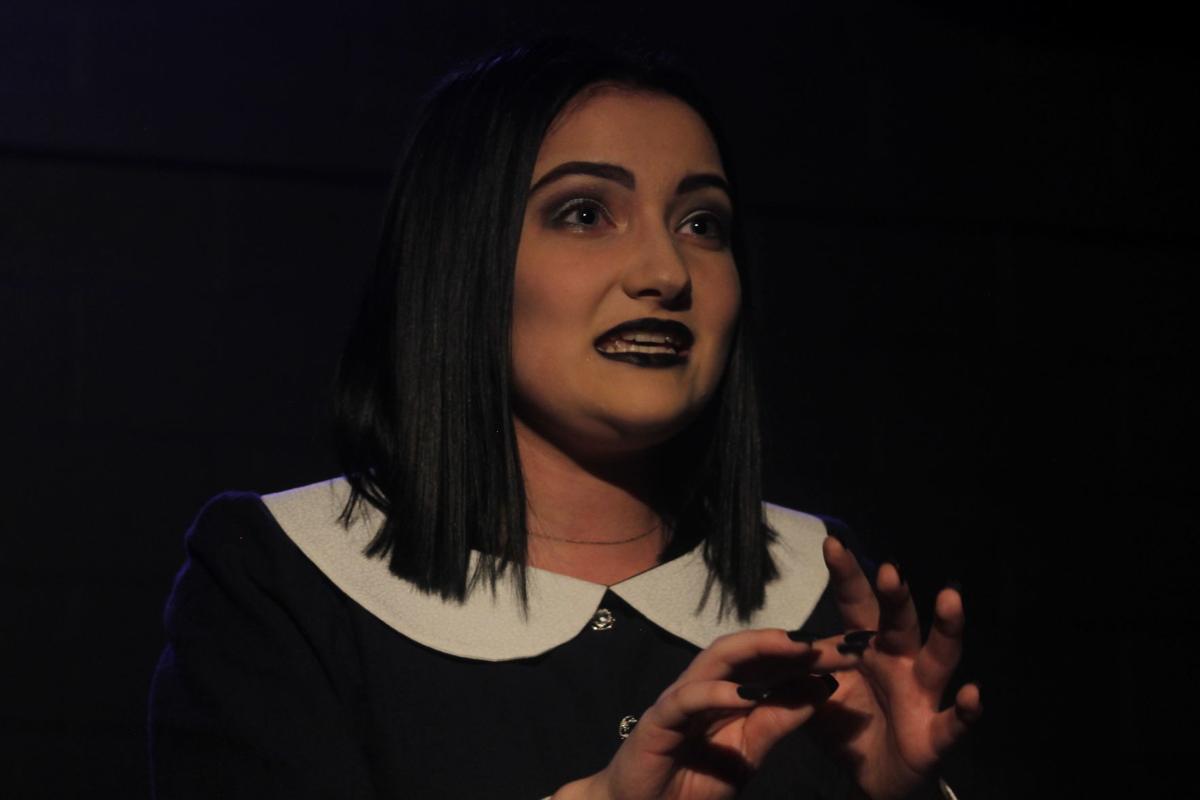 Wednesday Addams, played by Cat Enslen, finds herself pulled in a new direction after dating her fiancé, Lucas Beineke, in Street Lamp Community Theatre’s production of “The Addams Family.” 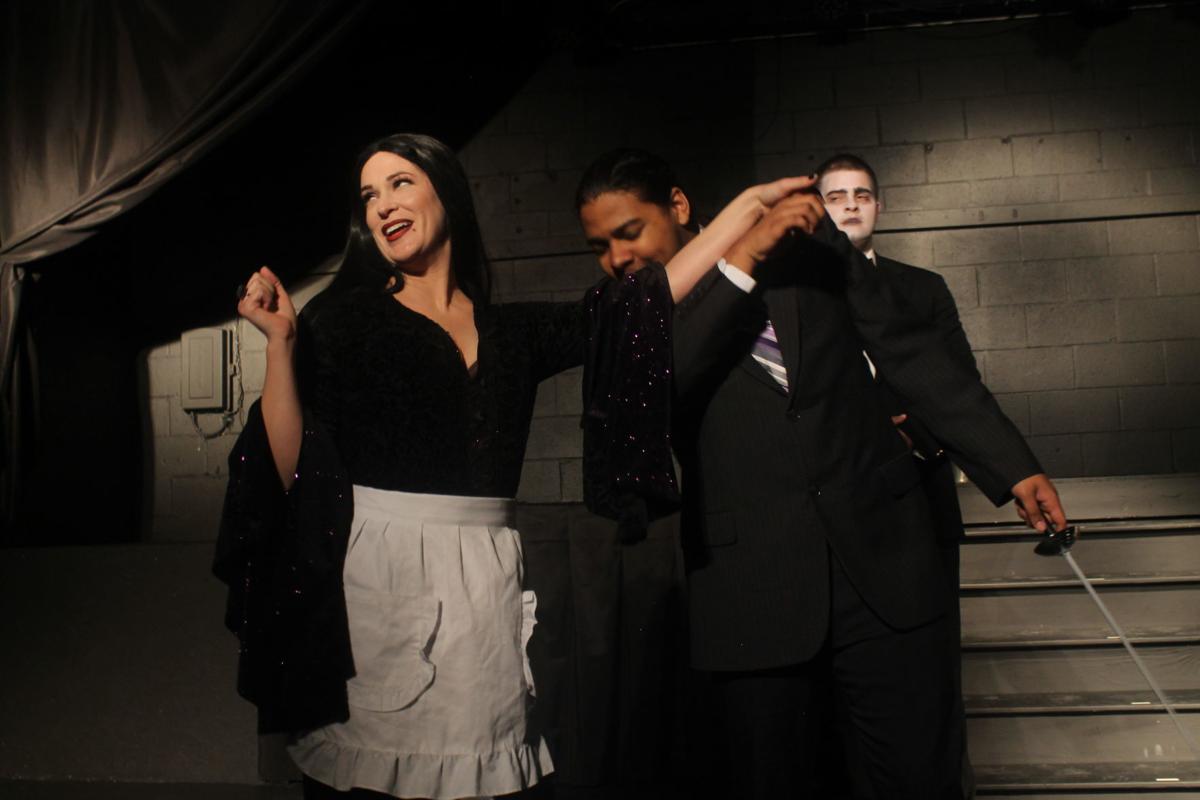 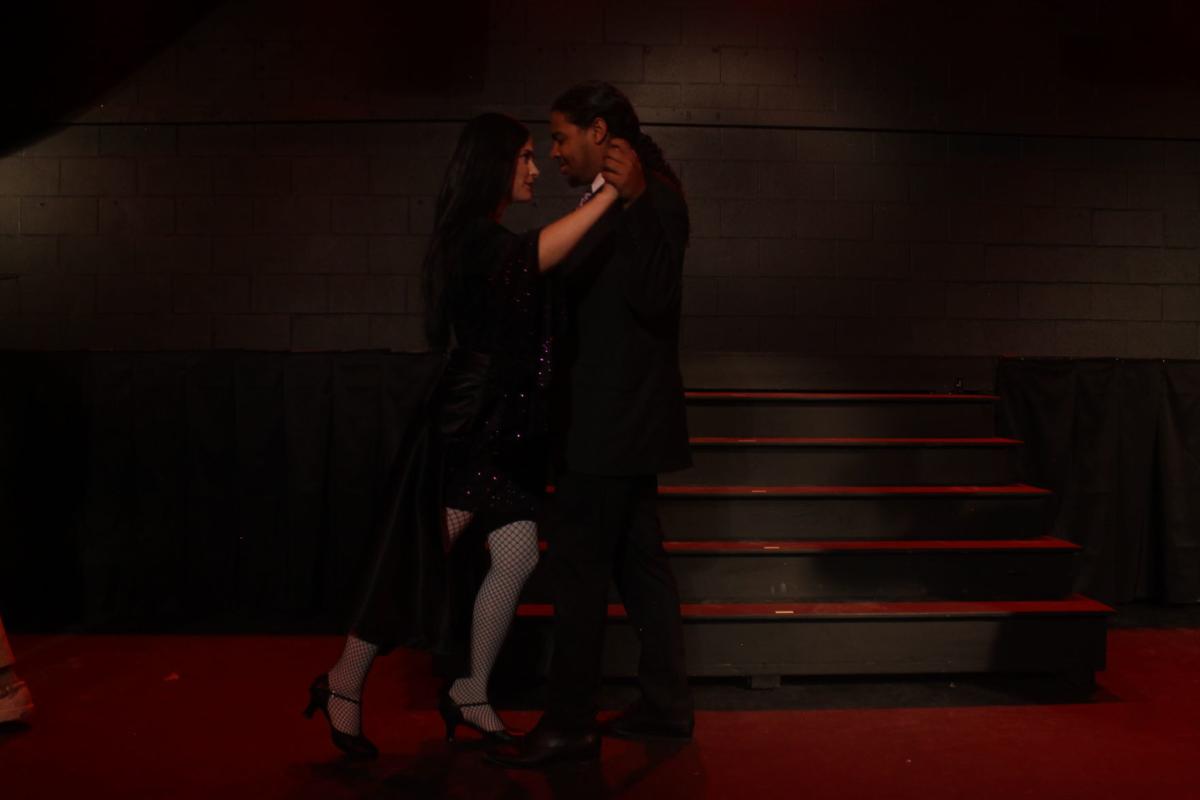 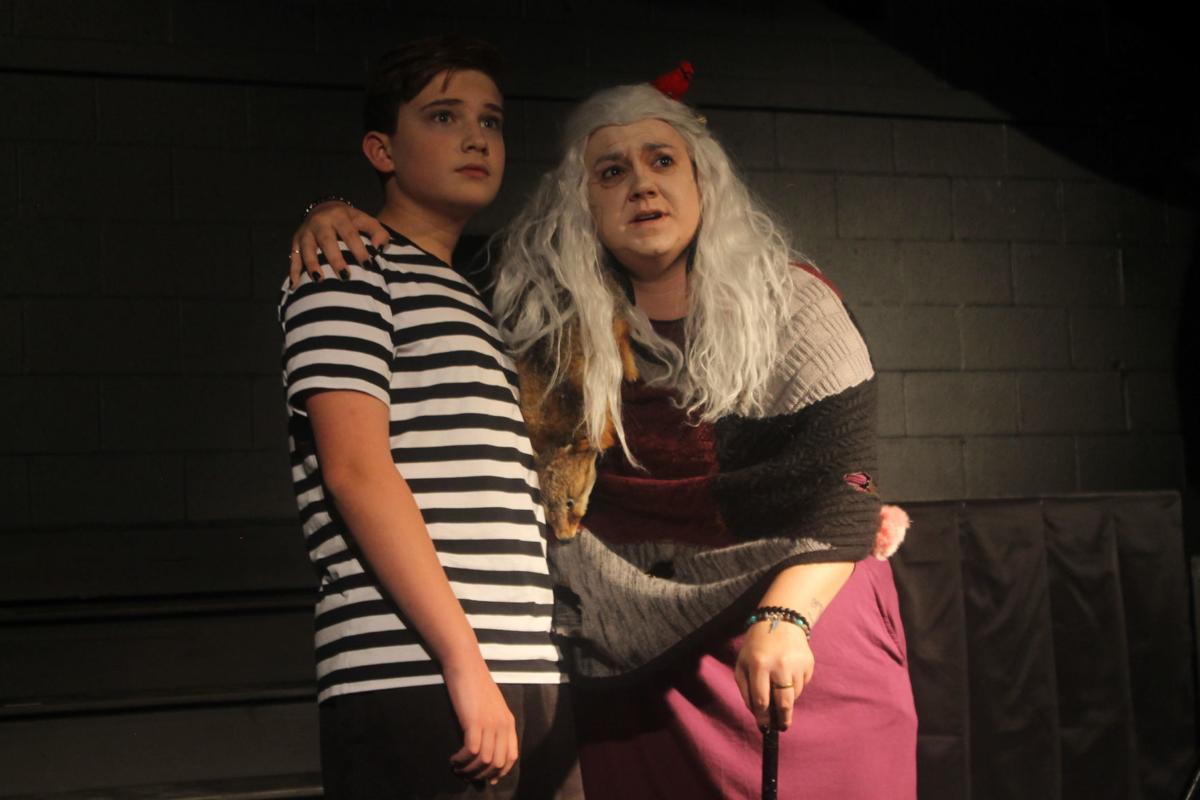 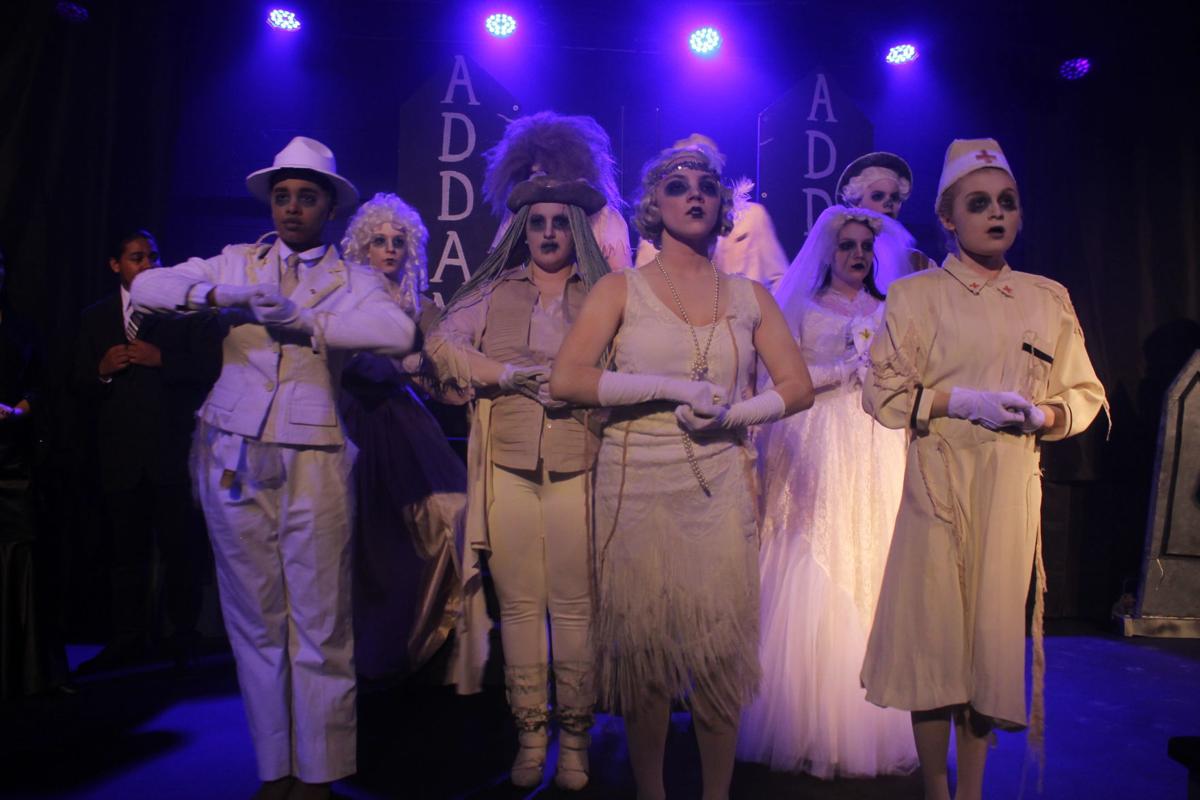 Wednesday Addams, played by Cat Enslen, finds herself pulled in a new direction after dating her fiancé, Lucas Beineke, in Street Lamp Community Theatre’s production of “The Addams Family.”

RISING SUN — Full disclosure: The Addamses are anything but your average family. But step foot inside their gothic mansion in Street Lamp Community Theatre’s production of “The Addams Family,” and you’ll find yourself at home amidst the eeriness and oddity.

The production, directed by husband-and-wife team Jamie and Andrew DiMaio, brings to life the members of the kooky, spooky family that many know and love from the comic strip, television shows and films.

Eric Bray, who plays the family’s patriarch, Gomez Addams, said he enjoys playing the character because of Gomez’s dramatic, yet relatable nature.

“I like that he gives off so many different emotions and he’s really relatable,” Bray said. “The audience can follow along with his journey because it kind of follows his point of view … He is what I would do in the situations, so I feel like I can relate to him personally.”

Bray played Gomez at a teen camp last year, so he said it was fairly easy to slip back into the role — though he did have to memorize some things differently for this particular production.

The main challenge that Bray faced in this production was learning how to dance the tango.

“The tango is a very long dance that I had to learn and memorize,” he said. “That was difficult, but I think it was worth it and it all came out really well.”

Steven Soltow, musical director for the show, said he enjoyed the Latin-influences in the music for this show, particularly with Gomez’s character.

“A lot of the songs have this Latin kind of feel to them, which really plays into the fact that Gomez is of Spanish descent … I love Latin music, so I’ve been really drawn to a lot of the music in this just because it’s really syncopated, lots of off-beat accented kind of things in the music, which makes it really fun.”

Although he enjoys the solos that characters sing, Soltow said he is drawn more to group numbers because of the high energy of everyone being on stage at once.

Soltow said his favorite song in this show is a tie between “One Normal Night” and “Full Disclosure.”

“One Normal Night” takes place when Wednesday Addams is pleading with her family to act “normal” while her fiancé, Lucas Beineke, and his family are visiting for dinner.

Meanwhile, “Full Disclosure” is sung during a truth-telling game when the Addamses and the Beinekes are at the dinner table.

Bray’s favorite song in the show is “The Moon and Me,” which Uncle Fester sings about his lunar love.

“Before I knew the show, that was the first thing that I heard and I just fell in love with the show from there … It’s just really nice and gentle. All the female ancestors are in it and it’s just different than a lot of the mood of the show,” Bray said.

Stephanie Peterson, the show’s choreographer, said this production was a new experience for her because she primarily choreographs children’s shows. Although this was only her second time designing choreography for grownups, she said it was an entertaining task to take on.

“The music just choreographs itself,” she said. “The opening number says bunny hop and line dance and do the twist. That was so fun because I could just do whatever I wanted in the idea of that.”

Peterson, who is also part of the ensemble cast, said the more challenging part was actually performing her own dances.

“I was sitting out, watching the dances the first couple runs and then eventually I had to be in them,” she said. “I was going the wrong way because I was watching it one way for so long and I would go ‘Where do I stand?’ and they would go ‘You’re over here.’ So it was really difficult, but it’s been pretty cool getting to do my own stuff which I haven’t done that before.”

Of the songs in this show, Peterson said she most enjoyed choreographing the dance for “Death is Just Around the Corner.”

Director Jamie Dimaio told her that she could put a tap dance sequence anywhere in the show, and Peterson said this song was a natural fit.

“You kind of can just hear it in the music and I was like ‘Oh yeah, this is perfect,’” she said.

Street Lamp’s production features an ensemble cast that is more female-dominant, which Soltow said presented a bit of a challenge.

Despite an unbalanced number of men and women in the ensemble, Soltow said the entire cast took the music for this show in stride.

“We have a really musically talented cast that was able to pick up the music,” he said. “Plus, I’d say maybe a third of the cast has actually done this show before, so they came in here really familiar with the music already … My job has been easier and I get to tweak and be really nitpicky.”

As summer fades into fall, Soltow said “The Addams Family” is the perfect show for people to come and see this season.

“It’s a fun time of year because you’re getting into October and the Halloween season, so it’s a good time of year to see something like this,” he said.