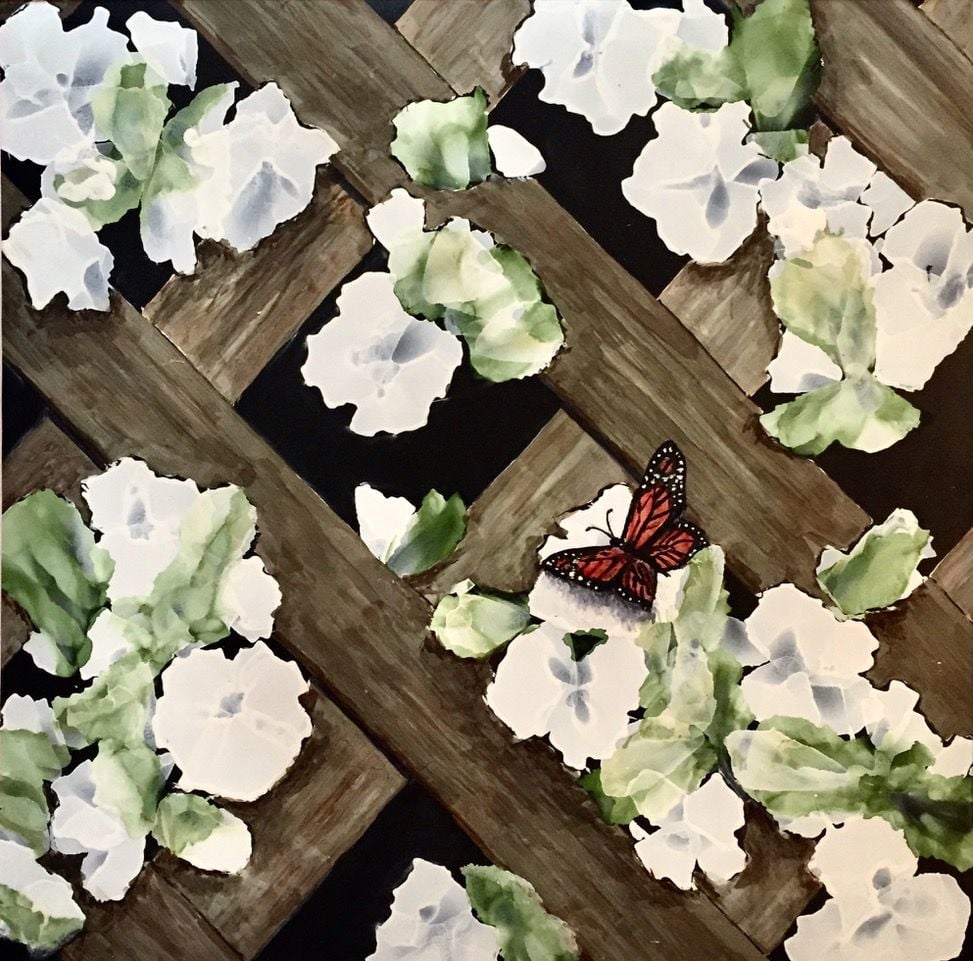 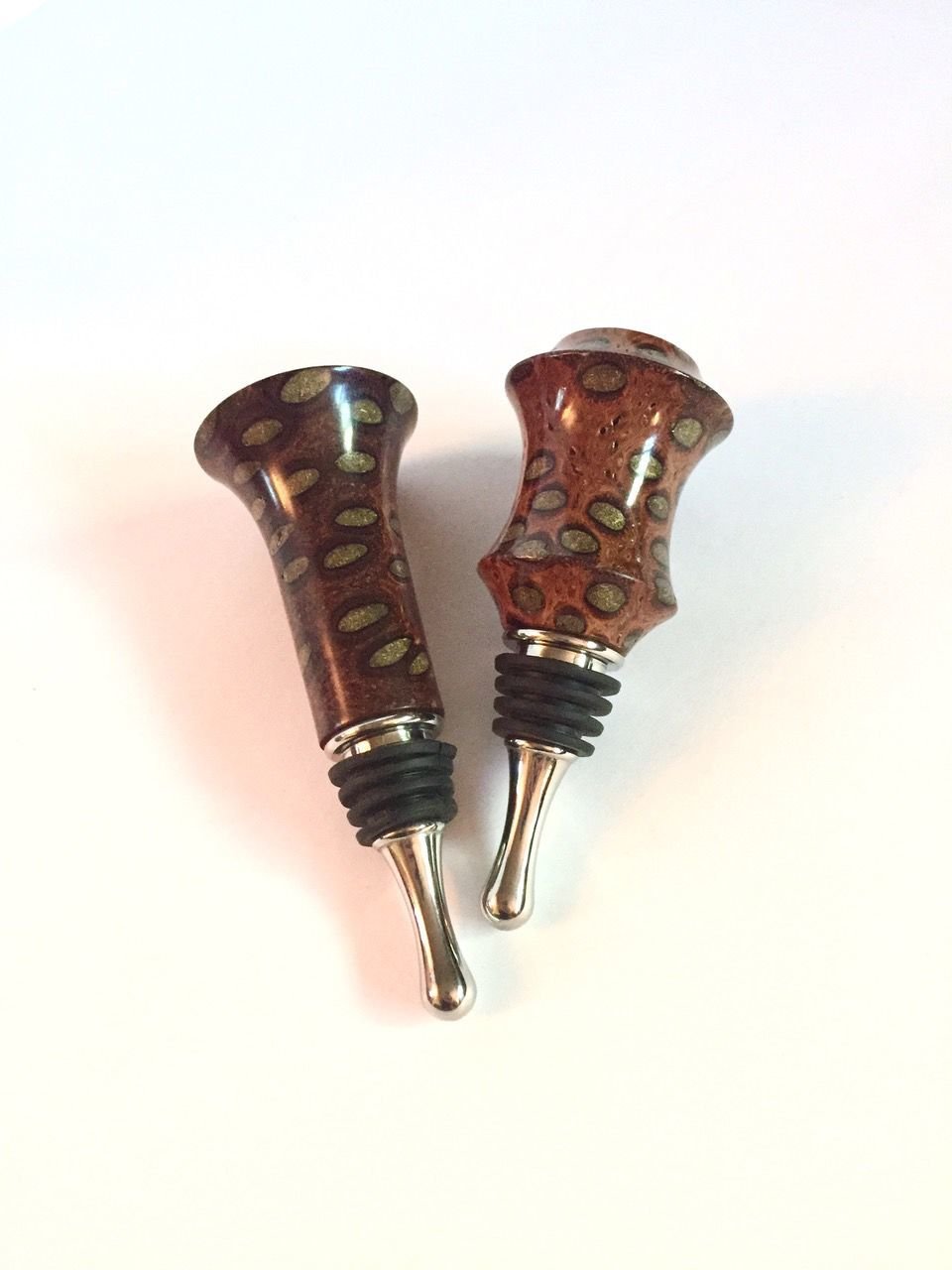 These wine stoppers were turned by woodworking artist John Cargill. 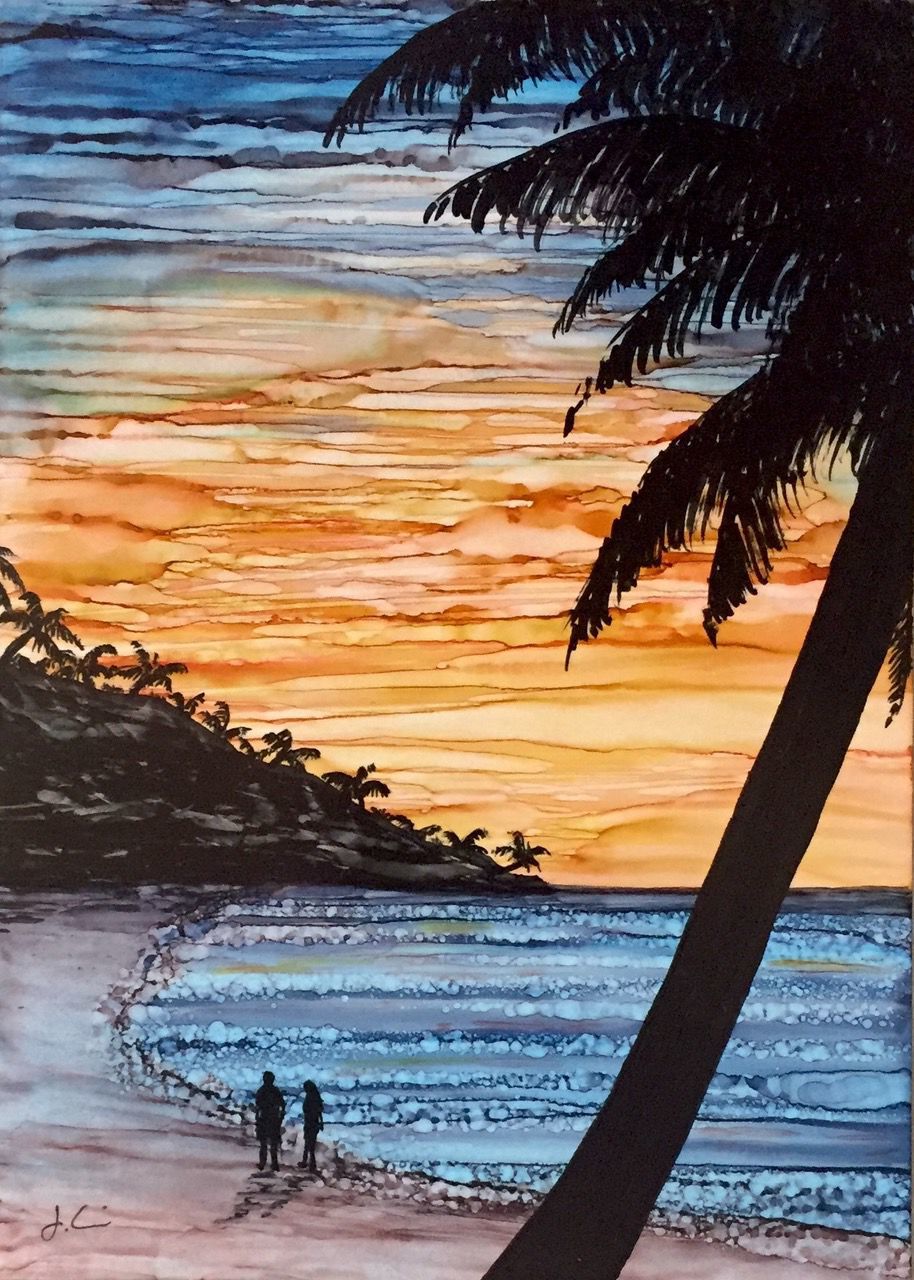 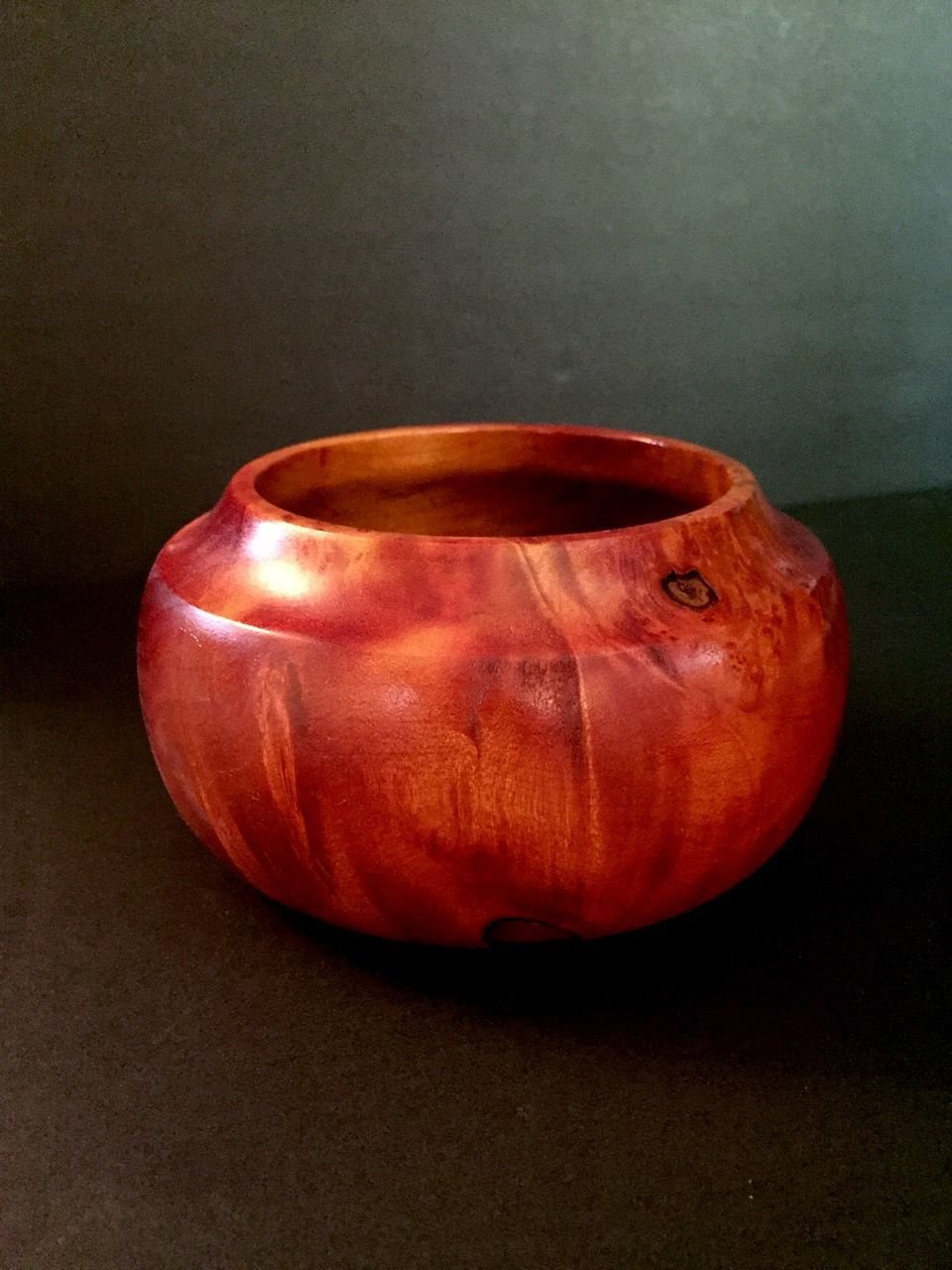 This bowl was created by woodworking artist John Cargill.

These wine stoppers were turned by woodworking artist John Cargill.

This bowl was created by woodworking artist John Cargill.

ELKTON — John and Julie Cargill found their respective artistic media along different paths: one out of utility, the other on a whim.

Now, the Cargills will present their work together in the opening reception for their First Friday exhibition titled “Affairs of the heART” from 5 to 8 p.m. Friday, Dec. 6, at The Palette & The Page. Local authors Daniel M. Ford and Susan Robinson will sign their books, while Wendy Gill and Joe Paulus will provide live music.

The Cecil County Arts Council will host their own First Friday opening reception for their Holiday Art Mart. The CCAC will also open up their Wonderland of Wreaths exhibition and silent auction at 10 a.m. Friday.

A little more than three years ago, Julie decided on a whim to take an introductory alcohol ink workshop at The Palette & The Page.

Before that day, Julie had never seen or heard of alcohol ink. But after attending the workshop, she couldn’t get enough of the medium.

She went out and bought materials, started playing around with ink, and has been honing her own style for the past three years.

John, on the other hand, started woodworking in the mid-1990s mostly out of necessity.

“Really it was a means for me to have some furniture in my house after graduate school,” he said. “I made a couple pieces myself and then started doing more and more.”

In the beginning, John said woodworking was all about the function. But for the last 10 years or so, he has started to look more at the aesthetics of the items he crafts.

As time went on, John used woodworking as an escape from his full-time job.

“Over the years, I picked up new techniques and did new things, made new things, really enjoyed the release and doing something creative with some of my spare time,” he said.

John said he goes through different periods in which he specializes in certain items. For awhile he focused on furniture, then picture frames. Now, he said his main focus is learning new techniques and creating pieces that showcase the wood’s natural beauty.

Julie said she doesn’t consider herself a particularly romantic or sentimental person. But in her art, she paints a lot of romantic scenes.

She also said she enjoys using new and unconventional tools to create different patters and textures, such as a toothbrush, coffee stir sticks, canned air and cotton swabs.

“ I’m always looking for inspiration and different ways to try out different techniques,” she said. “That’s kind of what keeps it exciting.”

When he is working on a wood piece, John said he finds himself in a state of “active meditation.”

“My job is technical in nature, so I work with numbers a lot,” he said. “This is a way to get out of that realm and get into a creative side. I lose myself in the work and I just like creating pretty things.”

While John sees woodworking as a way to temporarily detach from his day-to-day life, Julie uses alcohol ink painting to let go of her desire for control — or at least learn to adapt to unexpected situations.

“Alcohol ink is very difficult to control,” she said. “It kind of blooms when you lay it down on the paper … I’m a bit of a control freak, so on the one hand it forces me to let go of that, which is a really good exercise for me. But then on the other hand, I really like the challenge of trying to control it.”

Julie said the unique properties of alcohol ink allow her to create something that other artistic media cannot achieve.

“I always love the finished product,” she said. “The colors are bold and it just kind of moves in a way that you don’t see with other mediums.”

Starting a new artwork requires Julie to have a lot of forethought in terms of what she wants to create and how, but she said working with alcohol ink also forces her to think on her feet.

“I definitely go into it with a plan and an idea, but because of the nature of the ink sometimes my sky becomes my water and sometimes I have to change it up mid-painting,” she said.

Similarly, John plans out what he wants to craft ahead of time but he also lets the wood speak for itself.

“Having a plan is definitely a critical component, but I do have things happen along the way that change it slightly,” he said. “Sometimes I try to let the lumber tell me what the best thing that it can be is.”

John said his creative process often requires patience, as well as careful consultation with his wife to get her perspective.

“I looked at the hollow logs for almost two years before I really figured out what was the best thing to do with them,” he said. “Julie and I talked a lot about different ways to utilize that wood and eventually we came up with a great idea together and pulled it off, but it took a couple years of staring at it and thinking it through.”

Partners in art and love

As many love stories begin, Julie met John through a friend of a colleague while they were living in Wilmington, N.C.

At the time, Julie was volunteering at a store where she was doing decorative painting on furniture, with the proceeds of the sales of those items going to support a domestic violence shelter.

One of Julie’s colleagues’ friends was also friends with John and told him he should meet her. So, John stopped by the store where Julie was volunteering and ended up asking her on a date. The couple, who now live in Elkton, celebrated 17 years of being married in October.

The Cargills find themselves collaborating quite a bit in their art. For the First Friday show, they worked together on a collection of wine stoppers that John fashioned out of wood and Julie painted.

They also collaborated on an 18-inch candlestick for another show at The Palette & The Page a couple years ago, according to Julie.

Even with artworks that are not direct collaborations, Julie said she and her husband bounce ideas off of each other.

“Even if we’re not putting our media together, we’re always talking to each other about challenges or choices that we’re making within our own art,” she said.

John and Julie agree that part of being a married couple who are also artists means seeking out one another’s opinions on artwork and supporting each other’s visions.

“John supports every endeavor that I want to pursue,” Julie said. “He wants me to go for my dreams, so he’s definitely very supportive in terms of me taking the time to pursue that and just giving his feedback when I ask. Everything that he does is in support of me pursuing this portion of my life, so I’m very grateful for that.”

“Julie lets me ask her all sorts of questions — even if she doesn’t like it sometimes,” he joked. “Julie has an interior design degree as well so she has a good eye for all things visual. There are a lot of times when I ask her opinion about a shape of something that I’m turning or maybe it’s a finish that I choose, pairing different things together.”

Julie said she is excited to show her work in an art exhibition for the first time, and although John has presented his art at The Palette & The Page before he said he is looking forward to do it with Julie this time around.

John encouraged people to come to the show to see their work, but especially Julie’s.

“There’s a lot of depth in the inks and a lot of things that you can’t gather from a picture,” he said. “It’s really something you have to see in person.”

Meanwhile, Julie urged folks to never stop exploring, whether in art or another realm.

“It took a long time to figure out my creative outlet,” she said. “It was just kind of on a whim that I decided to take this workshop and see. People are often afraid and they don’t think they have what it takes or that they can’t. I would just say ‘Don’t be afraid to keep exploring until you find your creative outlet and what feeds your soul.’”