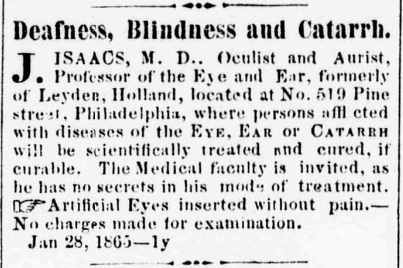 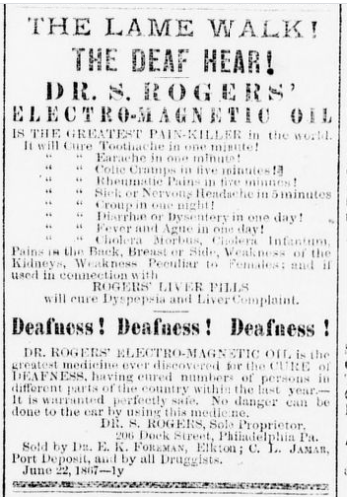 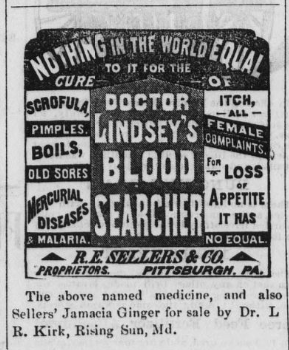 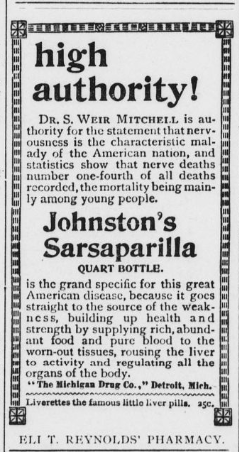 Researching information to write the historical society’s weekly article has been a challenge during the coronavirus quarantine. The society has been closed since mid-March and that has meant that our volunteers can’t access our digital newspaper collection. Fortunately, research can be done at home with the use of Chronicling America.

Chronicling America is a searchable full-text collection of pages from thousands of digitized newspapers from across the United States, including Puerto Rico. Coverage ranges from 1789 to 1963 but varies for each newspaper.

In a Cecil Whig advertisement from the January 4, 1868 edition, Dr. Reynolds of Rising Sun proclaims, “Good news for the afflicted: CANCER IS CURABLE! Let the unfortunate, who are suffering with this supposed incurable evil, now take courage.”

Dr. Reynolds also states that he may be “consulted at the Hotel of John A. Thompson in Rising Sun on Tuesday or Thursday of each week after the 6th of January.” Dr. Reynolds doesn’t mention whether his cure is a pill, syrup, tonic, or lotion, but he has two testimonials – one from Sara P. Pierce of Rock Springs, Cecil County, MD and one from Chronomous H. Alexander of Pilot Town, Cecil County.

An advertisement for Dr. S. Rogers’ Electromagnetic Oil in the May 21, 1868 issue of the Cecil Whig claimed “The Lame Walk! The Deaf Hear!”. This oil was supposed to cure earaches, toothaches, colic cramps, rheumatic pains, weakness peculiar to females, and more within minutes.

Dr. Rogers also offered liver pills to work with the electromagnetic oil. This magic potion was available from Dr. E.K. Foreman in Elkton, Dr. C.L. Jamar in Port Deposit, and by all druggists.

E.J. Moore, druggist from Port Deposit, advertised his liniment in the January 7, 1865 issue of the Whig. He states that it is the “Greatest Pain Reliever in the world for Rheumatism, Neuralgia, Pain in the Back, Breast, and Side, Sprains, Bruises, Swellings, Weakness in the Joints and Sinews, Cuts, Stings of Poisonous Insects, Chilblains, Frosted Feet, Sore Throat, Headache, Toothache, Cramp, Cholic, Cholera, Morbus, Diarrhea, and for Horses and Cattle it is unequalled”. Its advertised price? A bargain at just 35 cents per bottle!

Not all of the advertisements were made by local merchants and doctors. Occasionally a Philadelphia or Baltimore company would advertise in the local papers. J. Isaacs, MD who advertised himself as an “Oculist and Aurist, and Professor of the Eye and Ear”, was from Philadelphia and advertised his services in the February 4, 1865 Cecil Whig.

He claimed to treat deafness, blindness, and catarrh (which is an excessive discharge or buildup of mucus in the nose or throat). He also mentions that he can insert artificial eyes without pain!

Some advertisements targeted specific groups of people. For example, an advertisement for Wine of Cardui appeared in the Midland Journal on December 28, 1900. It targeted young women. The advertisement warned that the “entry into womanhood is a critical time for a girl” and that “little menstrual disorders started at that time grow into fatal complications”.

The makers of Wine of Cardui claimed that it “establishes a painless and natural menstrual flow”. Further research into this magical elixir found that the main ingredients in this wine were potassium (51.9%), salt (16%), and alcohol (20.3 %) In comparison, the average alcohol content in a glass of wine is between 11% and 13% and beer is even lower!

Another ad targeted men, with the title “Errors of Youth”. The advertisement promised to send a recipe and directions for making a simple remedy to gentlemen who needed help from the “effects of youthful indiscretion”, nervous debility, and premature decay. The advertisement was from John B. Ogden, 42 Cedar Street, New York. Privacy was guaranteed!

All of these advertisements, and more, can be found on the Chronicling America website. The Historical Society of Cecil County is currently closed and we have no idea when we will be permitted to reopen. We hope everyone is following the stay-at-home order and that you are washing your hands. Stay healthy friends!