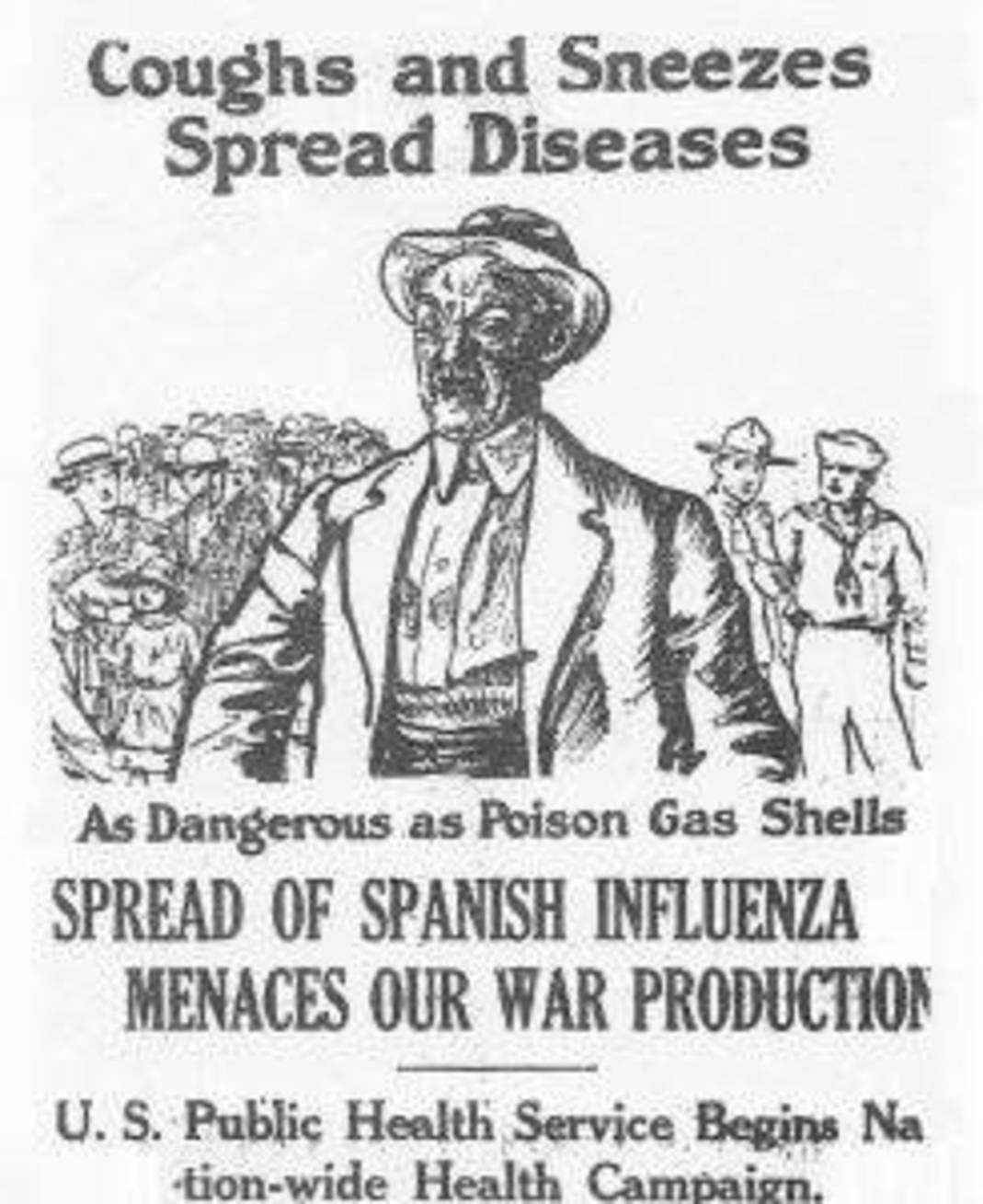 The Spanish flu was believed to have been brought back by U.S. soldiers returning home from WWI, where it quickly spread around the nation, including Cecil County. 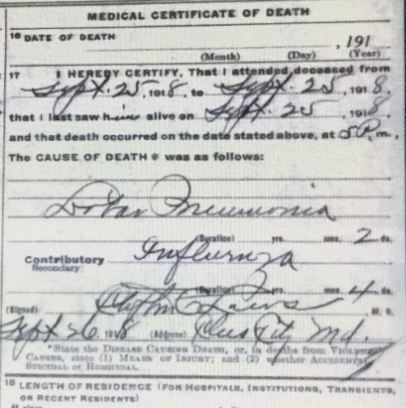 At least 142 people died in Cecil County from the Spanish influenza in 1918. Death certificates such as this one shed light to researchers upon the epidemic’s local impact. 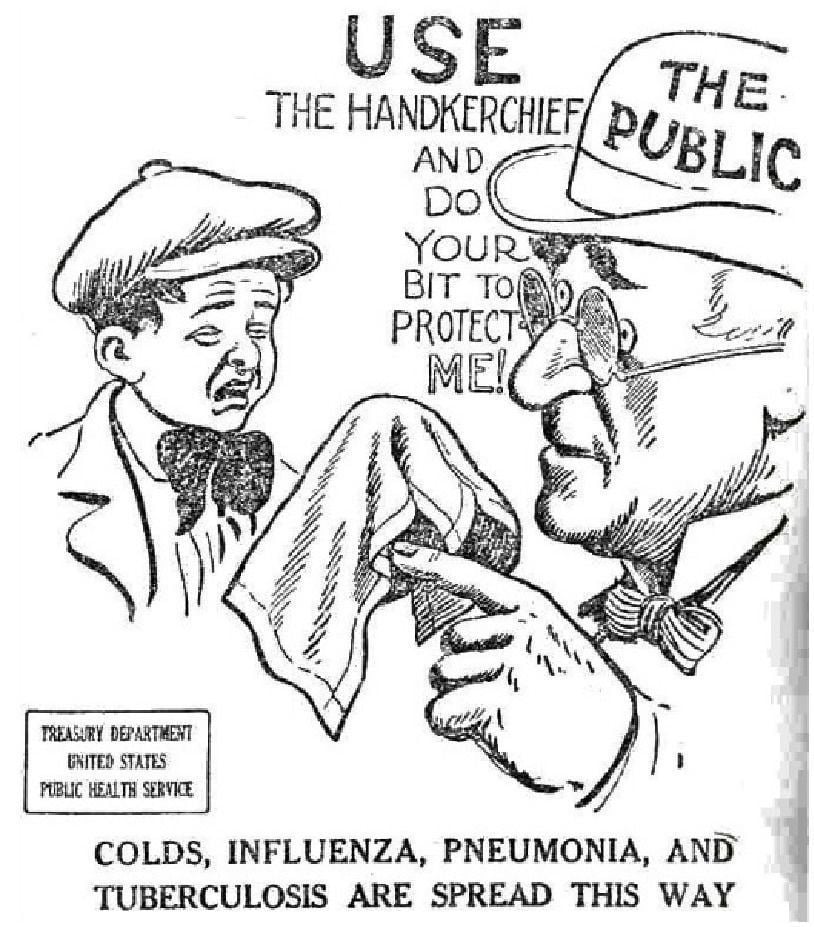 Advertisements such as this was one way the U.S. government tried to fight the epidemic in 1918. 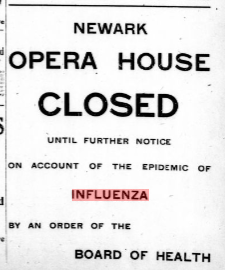 Some businesses were forced to close during the epidemic. This advertisement appeared in the Newark Post in 1918. 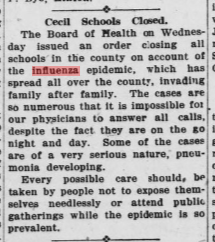 This notice from the Cecil County Board of Health appeared in the Midland Journal in October 1918. Schools were closed for the month of October in 1918.

The Spanish flu was believed to have been brought back by U.S. soldiers returning home from WWI, where it quickly spread around the nation, including Cecil County.

At least 142 people died in Cecil County from the Spanish influenza in 1918. Death certificates such as this one shed light to researchers upon the epidemic’s local impact.

Advertisements such as this was one way the U.S. government tried to fight the epidemic in 1918.

Some businesses were forced to close during the epidemic. This advertisement appeared in the Newark Post in 1918.

This notice from the Cecil County Board of Health appeared in the Midland Journal in October 1918. Schools were closed for the month of October in 1918.

This timely repost first appeared in the Cecil Whig in 2017. As the historical society is closed, a new story couldn’t be researched for this week. We will reopen as soon as possible.

ELKTON — There are few people left on this earth who can recall the 1918 flu pandemic firsthand. Dubbed the “Spanish flu,” the name is a bit of a misnomer as the strain that caused the epidemic mostly likely originated at Fort Riley, Kansas, or Étaples, France.

Referred to as the “forgotten pandemic” by historians, the majority of cases in the U.S. were seen over a very short period of time, which also coincided with the major battles of World War I so attentions and memories were focused elsewhere.

The epidemic hit in two major waves, the second wave being the worst of the two, due to the fact that it was inexplicably killing healthy adults who would normally recover from the flu with no major complications.

Cecil County saw its share of the epidemic. At its height, local newspapers printed pages upon pages of obituaries each week listing the names of its victims.

The following statement made by then-Surgeon General Rupert Blue was printed in the Cecil Democrat on Oct. 12, 1918:

“Epidemics of influenza have visited this country since 1647. It is interesting to know that this first epidemic was brought here from Valencia, Spain. Since that time there have been numerous epidemics of the disease. In 1889 and 1890 an epidemic of influenza, starting somewhere in the Orient, spread first to Russia and thence over practically the entire civilized world. There years later there was another flare-up of the disease. Both times the epidemic spread widely over the United States.

“Although the present epidemic is called ‘Spanish influenza’, there is no reason to believe that it originated in Spain. Some writers who have studied the question believe that the epidemic came from the Orient and they call attention to the fact that the Germans mention the disease as occurring along the eastern front in the summer and fall of 1917.

“How can ‘Spanish influenza’ be recognized? […] In contrast to the outbreaks of ordinary coughs and colds, which usually occur in the cold months, epidemics of influenza may occur at any season of the year. Thus the present epidemic raged most intensely in Europe in May, June and July. Moreover, in the case of ordinary colds, the general symptoms (fever, pain, depression) are by no means as severe or as sudden in the onset as they are in influenza.

“Finally, ordinary colds do not spread through the community so rapidly or so extensively as does influenza. In most cases a person taken sick with influenza feels sick rather suddenly. He feels weak, has pains in the eyes, ears, head or back, and may be sore all over.”

“The Local Draft Board has received word that the call for 11 men from this county to go to Camp Meade next Monday, has been canceled on account of the Spanish influenza.”

It seems that the outbreak impacted preparedness operations for the ongoing war.

In the same edition, the Democrat reported that “More than 300 cases of Spanish influenza and pneumonia are reported at the post hospital of the Aberdeen Proving Ground. The number of victims at the Edgewood Arsenal exceeds the Proving Ground. Later that same month the county Board of Health ordered all schools, churches and public gatherings within doors closed until further notice. They go on to say, “A number of deaths have already resulted in the county from the disease, which seems to be of a contagious nature, and scores of others are ill.”

This statement was written before the second wave, which had a much higher mortality rate, hit the county.

Despite such loss of life, businesses saw an opportunity to profit, such as an advertisement for a “strengthening tonic,” which ran in the Sept. 20, 1919, edition of the Cecil Whig.

Everyone was at risk of catching the flu. As reported in the Oct. 19, 1918, edition of the Cecil Democrat, “Every prisoner in the Kent County jail at Chestertown is ill with influenza, but up to present there have been no deaths.”

Even legal proceedings were interrupted. From the same edition of the Cecil Democrat: “The trial of Charles H. Johnson, former cashier of the National Bank at Aberdeen, indicted for the murder of Maj. King, of the Aberdeen Proving Grounds, has been indefinitely postponed on account of the serious illness of State’s Attorney William R. McComas, who is a victim of Spanish influenza.”

Then there was some contemplative reporting on Sept. 26: “For the first time in the memory of the oldest inhabitants all the churches in this county were closed last Sunday, and there were no services in any of the houses of worship on account of the epidemic of influenza.”

This image from the Cecil Democrat captures the mood of the county during the fall of 1918 as people dealt with the epidemic and the ongoing war.

Finally, nothing shows the severity of the epidemic like this report of nearby Newark, Del., in the Cecil Democrat in October 1918: “With six deaths in one day and many new cases reported, influenza conditions in Newark have not improved. Mr. And Mrs. Richard Ellis died of pneumonia, following influenza, Sunday, and their seven children are ill, pneumonia having developed in two of the cases. […] Mr. Ellis was about 50 years old and employed in one of the mills, died about 5 o’clock Sunday evening and his wife two hours later. Samuel Short, 33 years old, died late Sunday. […] Mrs. Short and their 10-year-old son died the latter part of last week. Of the two remaining children one is ill with influenza. Mrs. Mildred M. Harrigan […] also died of influenza aged 18 years. […] Secretary of State Johnson is ill with the influenza at his home near Newark.”

However, as quickly and aggressively as it had arrived so the Spanish flu left. Many people developed an immunity during the first wave and while the second wave was even more aggressive, people with previous exposure were hit less hard.

As World War I raged on, people forgot about the outbreak, but it left its toll. Worldwide as many as 500 million people contracted the flu strains and it is estimated that 50 to 100 million people died from the flu or complications during recovery.