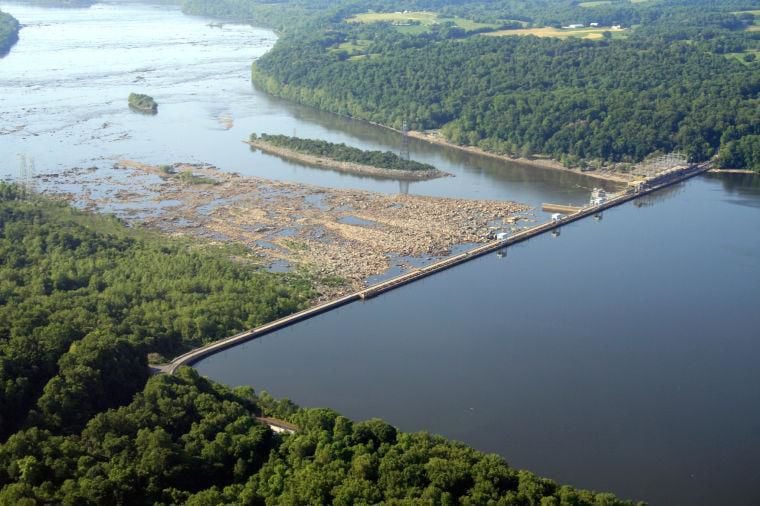 An aerial view of the Conowingo Dam

Arks like this one carried goods down the Susquehanna River to Port Deposit until the Conowingo Dam was built. (from Lancaster Online)

An aerial view of the Conowingo Dam

Arks like this one carried goods down the Susquehanna River to Port Deposit until the Conowingo Dam was built. (from Lancaster Online)

This week’s article originally appeared in the Bulletin of the Historical Society of Cecil County. It was written by Dr. Davy Henderson McCall, who served as an Economist at the Department of State, US/AID, and World Bank. After retirement in 1984, he moved to Chestertown and taught Economics at Washington College until 1999. Dr. McCall had family ties to Cecil County. He passed away in 1999 at the age of 97.

Shortly after the War of 1812, the Maryland Canal was built along the eastern bank of the Susquehanna River, running from the Pennsylvania-Maryland border to the northern outskirts of Port Deposit. At the head of the canal, where the arks and rafts entered to avoid the Susquehanna Rapids, was a settlement called Ark Haven, now submerged by the waters backed up by the Conowingo Dam.

John Ross, my great-grandfather, who came from Hopewell, had a fisheries site near Ark Haven in 1813. He had been, according to family tradition, a colonel in the War of 1812 and so may have come to the area immediately after his service. He probably married at about the same time.

Except that he was a married man with a growing family, little is known about his life from 1813 to 1826, but he must have accumulated quite a bit of capital in these years, for from 1826 to 1828 he spent considerable sums of money, expanding his fisheries interests, buying real estate, and, apparently, setting up and running an inn.

In 1826, he bought — jointly with Elias Pennington, Abijah Ferris, and Joshua Dorsey — a black horse, saddle and bridle, four bedsteads with feather beds and bedding, one patent clock, one dozen Windsor chairs, one dining room table, one breakfast table, a cow, and a sow and six pigs from Monson Watkins, all for $400. The joint purchase indicates a business venture, the beds and chairs point to the likelihood of an inn.

The very next year, in June 1827, he bought for $200 the Kelly and Morgan’s Fisheries in Harford County, which were situated on Eustatia Island in the Susquehanna River. The island, which contained 30 acres, was opposite the mouth of Broad Creek on the Susquehanna’s western shore. This purchase included also Sample’s Rock opposite a hollow rock on the western shore, with the privilege of raising or repairing a dam and a pot or basket for catching shad with seines between the islands and the Harford County shore.

Then, one year later, in July 1828, John bought from the Susquehanna Canal Company a two-story frame dwelling in Ark Haven; lots 5 and 6 on the street fronting on the canal, and a tract called “Rocky Bottom” on the south side of the road to the canal. Ark Haven must have been a good location for an inn with boatmen and traders meeting as the arks and rafts entered the canal from up river.

Between the inn and the fisheries, he may not have had too much time for hunting, but his wife and daughters would have done much of the work of running the inn and his son was probably old enough by this time to work in the fisheries — and may have helped out at the inn as well. In any case, he had enough time to accept the appointment as Cecil County Coroner in 1831.

John was married to Susan Ash (born in 1784), daughter of Joseph and Rachel Whitaker Ash of Wagontown, near Coatesville, in Chester County, Pa. They had six children, according to family records substantiated by a family group of silhouettes in my possession showing John and Susan with six children. Only five can be traced into adulthood, so it is likely that one died in childhood. Their eldest daughter, Margaret, married Hugh Mackey, of a numerous local Presbyterian family.

Hugh Mackey, with Joseph Ross, John’s only son, bought John’s property at Ark Haven in 1834 and the two were business partners for a time. Two of John Ross’ daughters never married. Martha lived with her sister and her husband, Rachel and Theodore Knight, at Woodlawn and helped raise their children. She was remembered with much affection by her niece, Cora Kennedy.

A family story relates that as a young girl, Martha had been engaged to Jacob Tome, the Port Deposit lumber tycoon of the late 19th century. He started as a barely literate poor farm boy, who taught himself to read and gradually became successful. He worked on the Susquehanna Canal as a young man, and probably Martha met Jacob at the Ross inn on the canal. Martha’s marriage to Jacob Tome was discouraged by members of her family, as they thought he was not good enough for a Ross.

One of the most vocal in opposition to the marriage was her cousin Callie Webb, daughter of Rebecca Ash Webb, Susan Ross’ sister. The family opposition succeeded and the romance was broken up. But later cousin Callie herself married Jacob Tome and became the great lady of Port Deposit. Cora Kennedy was devoted to her Aunt Martha Ross, who nonetheless comes down in family memory as a sad lady, inclined to look on the gloomy side of life. Could a bit of cousinly treachery have soured her outlook on life?

Martha’s sister, Anne Eliza, also unmarried, lived in Rising Sun. She was lame, said to be the result of skipping rope too hard one childhood day. Anne Eliza was nevertheless, and in contrast to Martha, a cheerful and happy person. After her father’s death in 1840, she lived with her widowed mother Susan Ross for many years. Susan was remembered by her granddaughter, Cora Kennedy, as an elegant little old lady, who had a little black boy to wait on her. The Ross’ son, Joseph, married Rachel Burns and continued to live near Ark Haven.

In 1834, John’s youngest daughter, Rachel, who was then 17 according to family tradition, married Theodore Knight and moved to Woodlawn. With his children established, John must have thought it a good time to sell his Ark Haven holdings. He had been appointed County Coroner in 1831, so he did not retire completely, but he must have greatly increased the time he could devote to hunting. He died in 1840.

When John Ross sold his property at Ark Haven in 1834, the lots fronting on the canal were sold to Thomas Fulton for $520. The house/inn he sold to his son Joseph and son-in-law Hugh Mackey (then of Lancaster, Pa.) for $2,000, as well as the Rocky Bottom property and the island and fishpot in the Susquehanna River. He also sold his furniture to them for $600. The furniture included five dozen chairs, three bureaus, a settee, 12 small and large dining tables, one clock, six looking glasses, plus furniture in the bar and kitchen, 20 feather beds, one sideboard, glassware, cooking stove, a 10 plate stove for heating, one stone coal stove, 25 pairs of bedsteads, a carriage with double and single harness, two sets of plow gears, six dressing stands and four wash stands.

The inventory indicates that the inn was of considerable size. Some of the furniture Rachel Knight had at Woodlawn probably also came from John Ross’ estate: a pair of Federal period circular mahogany card tables, inlaid with satinwood, a large early Empire mahogany frame mirror, and some coin silver tablespoons with initials “J. & S. R.” for John and Susan Ross. Joseph later bought out Mackey and continued to operate the business on his own.

Since Ark Haven is now submerged under Conowingo Lake, it is no longer on any map. However, Joseph Ross’s house appeared on a Cecil County map of the 1870s, and from it I was able to find its location. Just on the Maryland-Pennsylvania line, the railroad intersects with a secondary road that leads southwest.

Following that road, I came to a steep hill and a dead end. From the dead end I could see the faint trace remaining of a road leading over the brow of the hill into the lake. I asked a farmer nearby if that was the old road to Ark Haven, and he replied that the village lay underwater at the foot of the hill. My grandmother, as an older woman, had a recurring and happy dream that she had come to a house by a river and that there she met again her parents and aunts and other relatives and friends long dead. Perhaps in her subconscious remained a recollection of enjoyable visits she had had as a child to this Ross family home on the Susquehanna, built thanks to the entrepreneurial skills of the Rosses of Ark Haven.