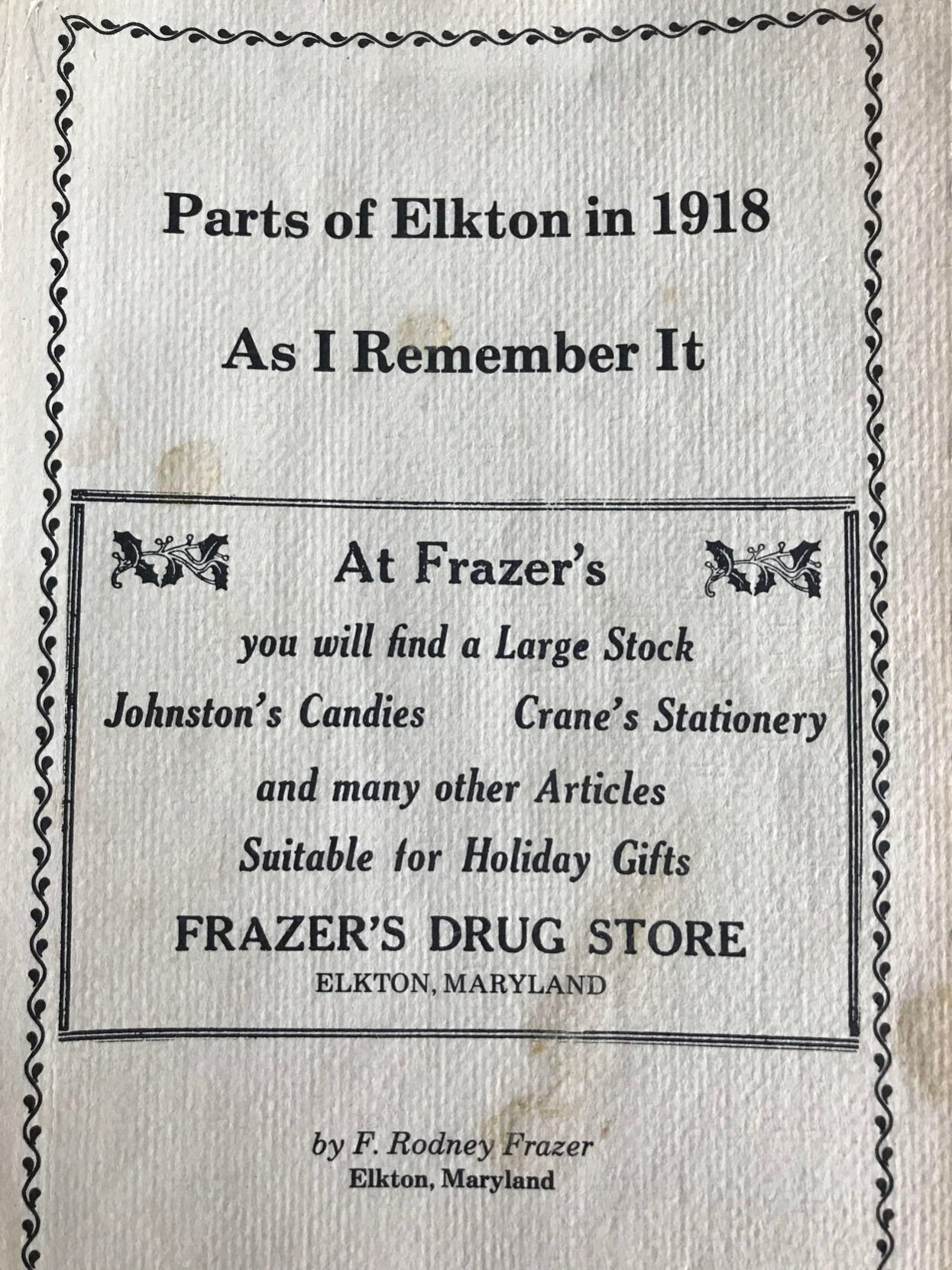 This is the cover of “Parts of Elkton in 1918 As I Remember It.” Note the old advertisement for the Frazer family’s drugstore. 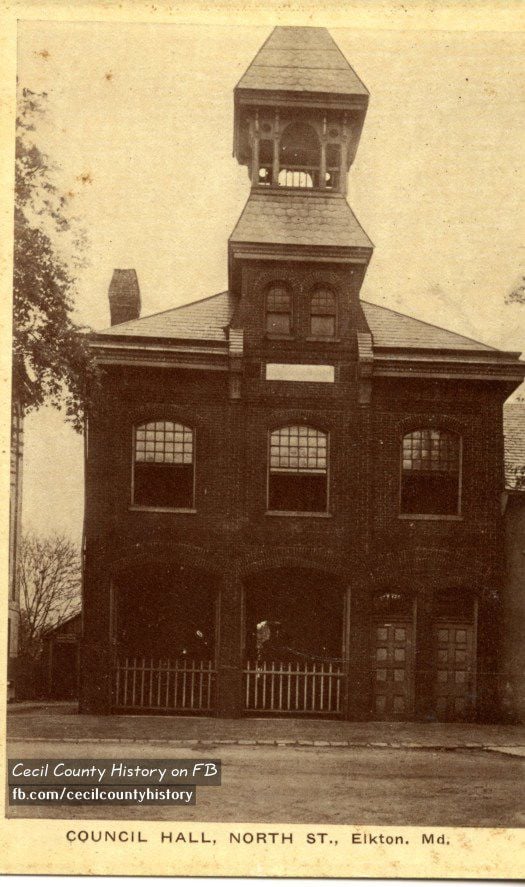 The original Singerly firehouse that Mr. Frazer mentions in his book. 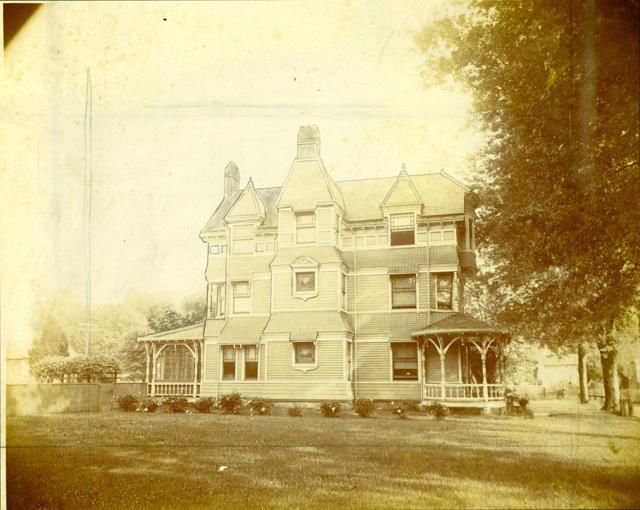 This is Singerly Cottage”, built by William Singerly in the late 1800s. It was purchased for use as Union Hospital. 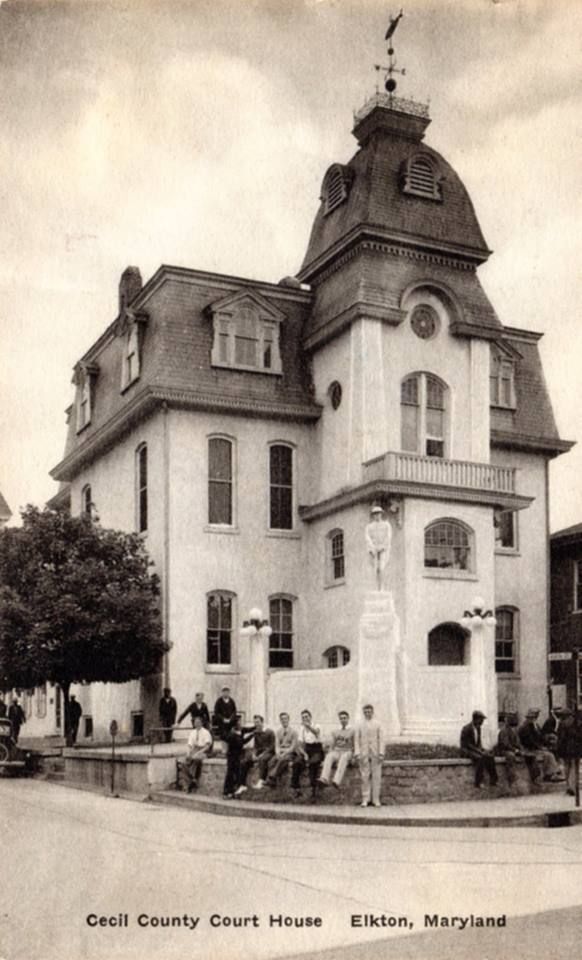 This was the courthouse building in 1918. It stood on the corner of Main Street and North Street in the center of town. 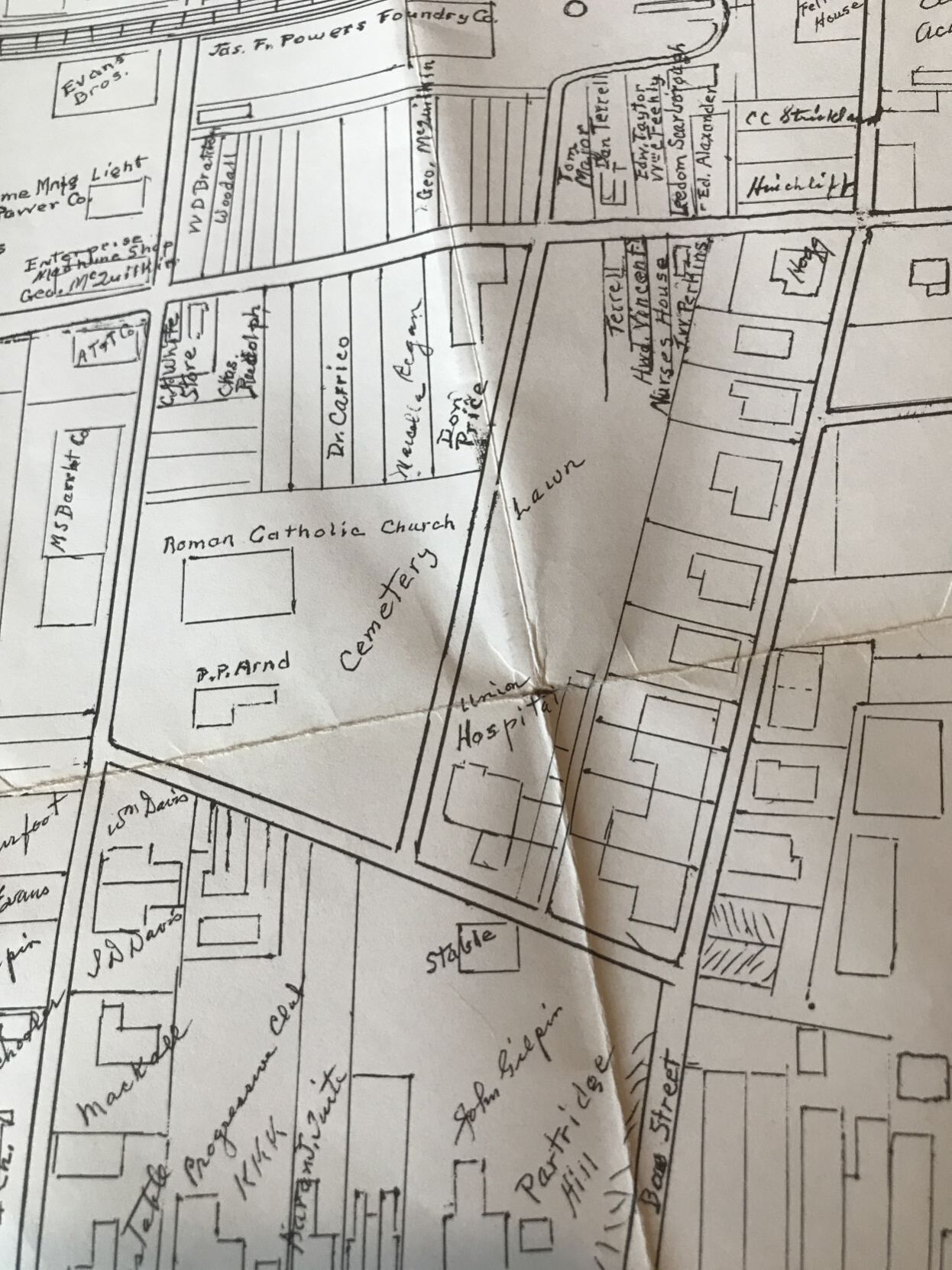 This section of the hand drawn map shows the location of Immaculate Conception Church and Union Hospital in 1918. The vertical road at the left is Bridge Street. 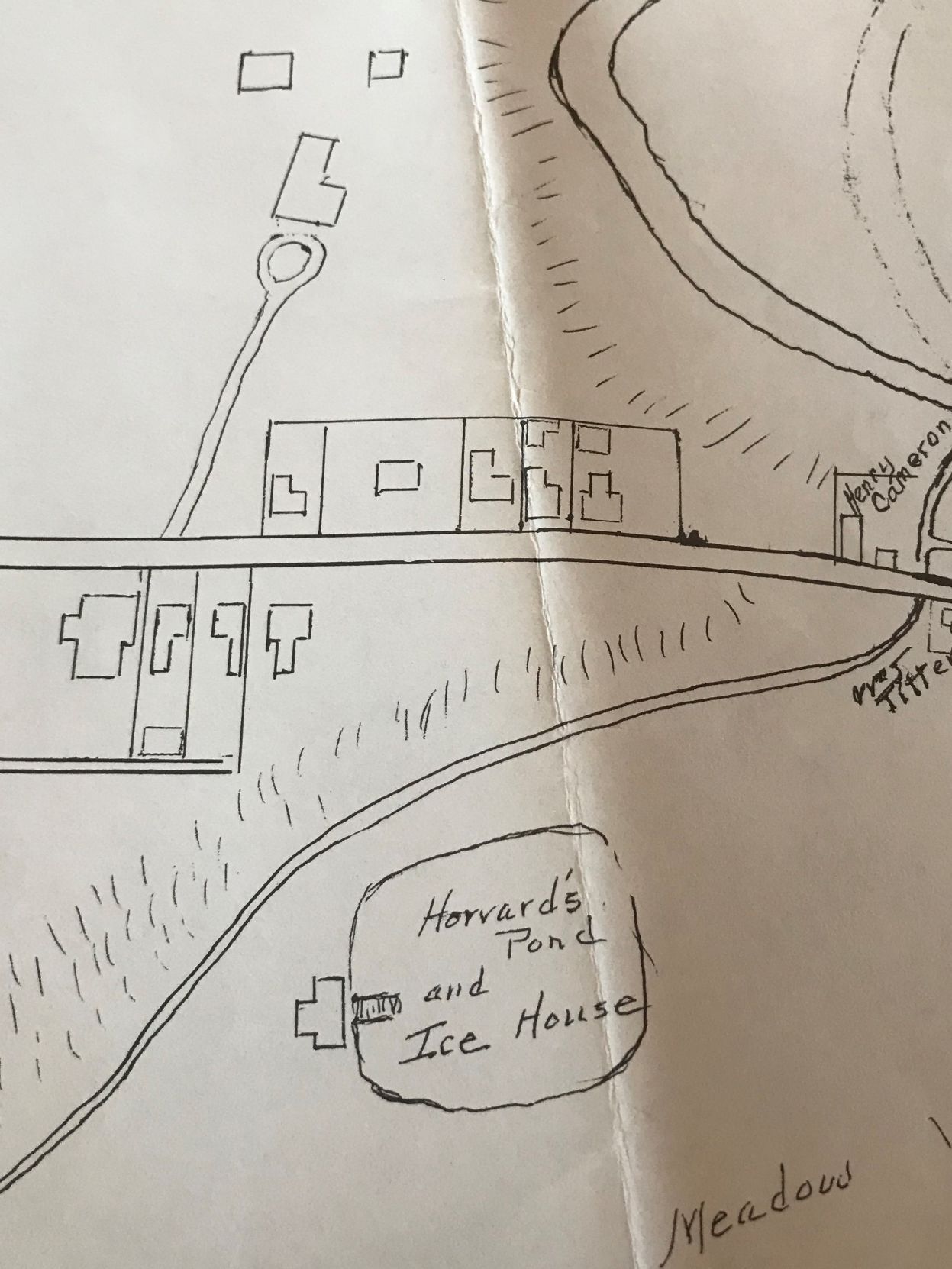 This is the cover of “Parts of Elkton in 1918 As I Remember It.” Note the old advertisement for the Frazer family’s drugstore.

The original Singerly firehouse that Mr. Frazer mentions in his book.

This is Singerly Cottage”, built by William Singerly in the late 1800s. It was purchased for use as Union Hospital.

This was the courthouse building in 1918. It stood on the corner of Main Street and North Street in the center of town.

This section of the hand drawn map shows the location of Immaculate Conception Church and Union Hospital in 1918. The vertical road at the left is Bridge Street.

Since the Historical Society of Cecil County remains closed, research for our weekly story has been difficult. Our volunteer authors have had to rely on online research, using websites such as Chronicling America to gather information or using materials we have on hand in our homes. One of the resources I have in my house is a book called “Parts of Elkton in 1918 As I Remember It” by F. Rodney Frazer.

F. Rodney Frazer was born in 1897 and lived in Elkton his entire life. He was a graduate of Tome School and Beacom College in Wilmington, DE. Besides his love for local history, the preface to the book says his interests include “gardening, furniture restoration, and conservation of the area’s natural resources.” He owned and operated Frazer’s Drugstore (now the East Main Café) on East Main Street for more than 50 years. He was also active in the Eder Park Association, the Historical Society of Cecil County, the Friends of the Library, and the Singerly Fire Company.

The book, with its hand-drawn map of Elkton, was written after being given an “Anything Book” as a gift from his cousin Anne Frazer Wilcox. He filled its blank pages with his recollections of the town of Elkton, and spent many hours researching at the courthouse and at the historical society. He originally intended the book for his family, but in 1989 he gave the Historical Society of Cecil County permission to publish the book. His memoir was published “as-is” with no corrections from the historical society.

Mr. Frazer organized his writing to resemble a guide book. The 1922 house numbers, assigned by the post office, were used in his description even though he was explaining events and people of 1918. He travels street by street, traveling up and down both sides of East and West Main Street, South Street, Howard Street, Delaware Avenue, North Street, Bridge Street, Bow Street, Whig Street, and Water Street. Along the way, he introduces the reader to the inhabitants of the houses and the proprietors of the businesses. Mr. Frazer goes beyond 1918, explaining important Elkton happenings up to 1930.

What follows is a summary of some of the landmarks described by Mr. Frazer that no longer exist, or have changed since 1918.

Mr. Frazer begins the “tour” at 101 East Main Street, which in 1918 was the address of the Cecil County Courthouse, now the office of the Elkton Alliance. According to Frazer, the original section of the building was built around 1791. The building was remodeled in the 1880s, adding a three-story section that faced Main Street. In 1918, on the east side of the first floor was the office of Cecil County School Board Superintendent Hugh Caldwell and Assistant Superintendent Lidie Sagar. On the west side was the office of Cecil County Treasurer Charles Gatchell. In the back was the small office of Chief Judge Albert Constable. The courtroom was on the second floor, and the third floor had two jury rooms. Part of the building faced North Street. This is the section of the building that in 1918 and later, became the “heart of the marriage mill” according to Mr. Frazer. Attached to that section was a two-story building occupied by the Singerly Fire Company. The first floor housed the fire company’s equipment. Two double doors opened to North Street. On the second floor there was a room for the fire company and a meeting room for the town council.

At the intersection East Main Street and South Street Frazer describes a street that didn’t exist in 1918. In 1918, across from where South Street meets Main Street, there was a narrow lane called Bell’s Lane. It was named for Henry Bell, the proprietor of Bell’s Store on High Street. At the time, houses lined the street and residents included Bedford Nookes, Isaac Wilson, Abraham Anderson, Molly and Fred Holland, and Anna May Wilson. Today South Street stretches from Howard Street to High Street. Bell’s Lane was widened for through traffic.

The house at 222 East Main Street was the home of the Jamar family. The lot stretched from East Main back to Howard Street. Dr. John H. Jamar lived there with his daughters Mary H., Susan Corinne, and Isabelle. In 1918, Mr. Fraser records that the backyard contained barns and outbuildings, along with a horse, a buggy, a sleigh, a cow, chickens, guineas, cats, and a dog.

Howard’s Meadow and Howard’s Pond were further down East Main Street. The owner made ice in the pond. An ice house stood on the west side of the pond. Its double walls were filled with sawdust and straw was placed between the layers of ice. After the ice was harvested, it was placed in the ice house until it was sold. When the house was filled, Mr. Fraser recalled that once the pond froze over again, people were allowed to skate on it.

At one time, Water Street (what we know as Howard Street) began at Bridge Street and stopped at South Street. To enter Elkton Cemetery, you entered through a wooden gate on the west side of the cemetery. The town of Elkton purchased a strip of land next to the cemetery from owner Jacob Howard for $100. They used this land to make a road that stretched between South Street and Delaware Avenue and named it Howard Street. The entrance now faces South Street.

At 217 Howard Street stood the Howard Street School. This was the primary school for Elkton until 1896 when Cecil County High School opened on Osage Street. Mr. Frazer attended this school until 1910. He remembered the school’s play yard, where the boys and girls had two separate areas to play. The yards were divided by a high wooden fence. The girls used the west side and the boys used the east side. The outdoor toilets were along side the fence. Ashes from the classroom potbellied stoves was always dumped on the boys’ side of the play yard. Today, the old school is an apartment building.

At the foot of Osage Street sat Cecil County High School. Mr. Fraser recalled that “All walked to school, willingly or not.” in his writing. The school had no plumbing and outdoor toilets. The morning bell rang at 9 am and dismissed for lunch at noon. Students were expected to return at 1:30 and continued lessons until 4 pm. In bad weather, the school had one session – 9 am – 1:30 pm.

The Immaculate Conception Church and Rectory used to sit at the intersection of Bridge Street and Cathedral Street. In 1918 those buildings and the church’s cemetery all sat on that corner. In that same vicinity was the ornate, three-story “Singerly Cottage” that was built by William Singerly. The building sat on the corner of Singerly Avenue and Cathedral Street. The cottage and the grounds of the cottage that extended to High Street were purchased for Union Hospital in the early 1900s. Additions were added and a nursing school was founded there.

On Railroad Avenue, Mr. Frazer described the activities in the Elkton Armory. The armory was the headquarters of Company E, a rifle company of the 1st Infantry Regiment of the Maryland National Guard. In 1918, Captain Charles B. Finley was in command. Company E was mobilized in 1916 to El Paso, Texas to try and subdue Pancho Villa. In 1917, they were drafted into service to train for World War I. Behind the armory stood a two-story brick building. This is the A.J. Reach Company, manufacturer of baseballs.

Frazer’s memoirs continue past 1918, but he doesn’t go into as much detail as he had in describing 1918. Here are some of the events he mentions:

1919 – Arthur Stanley has opened a newsstand in the “Hollow”.

1920 – The Volstead Act (prohibition) is being enforced.

1921– Oscar Humes, Deputy and Louis Seth, Sheriff and Magistrate Frank G. Pratt were placed under arrest by federal prohibition agents. They had enough bootleg whiskey in their possession to establish a violation.

Robert and Bess Thackery have raised over $10,329.80 for the “Doughboy” monument. It was dedicated on November 11, 1921 and placed in front of the courthouse.

Many locations were left out of this story. Mr. Frazer’s book is, unfortunately, out of print. The historical society has a few copies in our research library for purchase, but the society remains closed. A digitized copy of the book is available online. Got to https://web.archive.org/web/20150214152115/http://www.cecilhistory.org/virtuallibrary/elkton1918.pdf to read the rest of the book if you are interested.

The historical society remains closed indefinitely. Please email any questions you have to cecilhistory@gmail.com. We miss all of you.