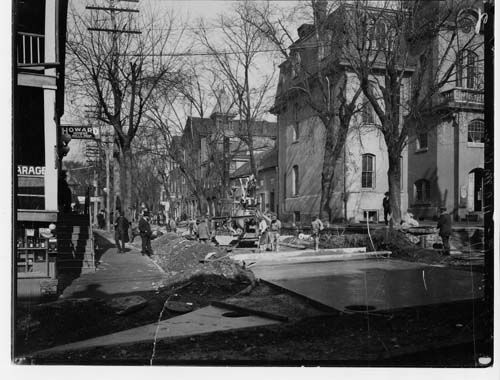 In 1919, the town of Elkton paved West Main Street and North Street with a 20 feet wide concrete surface. 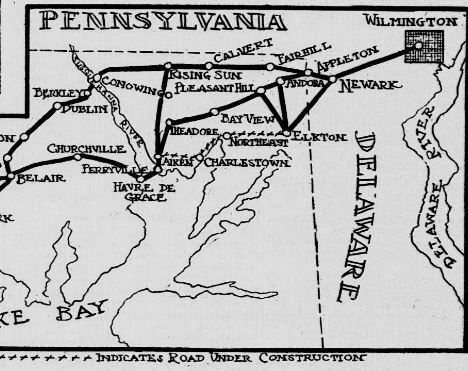 This map shows Cecil County roads that were under construction in 1913. 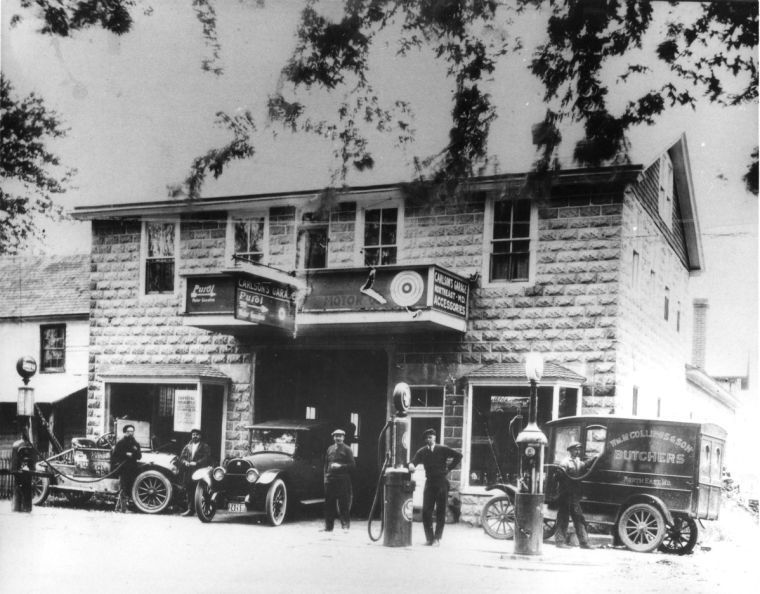 Carlson’s Garage of North East in the 1930s. 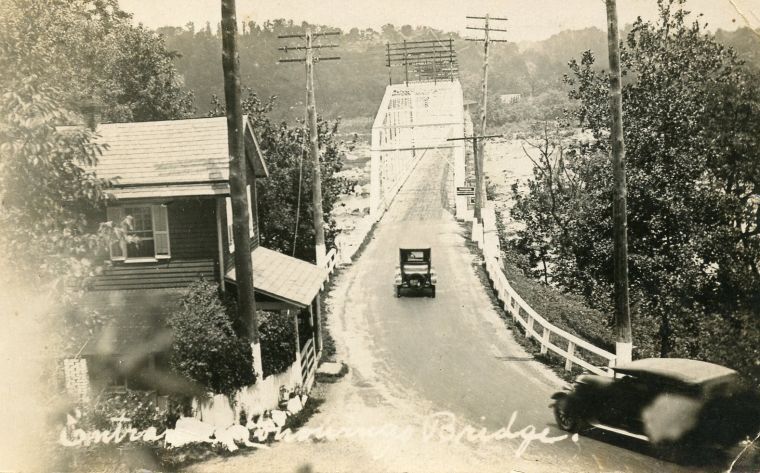 This undated photo shows the Conowingo Bridge before the dam was built.

In 1919, the town of Elkton paved West Main Street and North Street with a 20 feet wide concrete surface.

This map shows Cecil County roads that were under construction in 1913.

Carlson’s Garage of North East in the 1930s.

This undated photo shows the Conowingo Bridge before the dam was built.

A mere 10 years after Henry Ford started producing the Model A in 1903, motoring parties became a popular pastime. Situated between Washington D.C. and Philadelphia, Cecil County was often traveled by these new motorists. However, since there were no maps for roads that were often not suitable for car travel, crossing through the county was often quite an adventure.

Cecil County sat in the path of many proposed roads to connect cities along the northeast corridor (just like Route 40 and I-95 serve that purpose today). Prior to the automobile, roads in the county were either dirt or sand, depending upon the location. As the need arose for better roads, in 1909, “The Good Road Commission of Maryland” was asked to choose a route through Cecil County. They proposed the southern route, Perryville to Elkton, as opposed to Conowingo to Newark. They felt that in order to accommodate cars the bridge at Conowingo would need rebuilding, which would leave residents there without a way to cross the river in that process. Of course, local politics were involved. Everyone wanted the road to pass through their town to increase business. But no immediate decision was reached.

However, in 1911, it was reported in the Evening Star of the District of Columbia that efforts were being made to construct a motor highway from Montreal, Canada clear down to Miami, Florida. It was to be a highway of about 2,500 miles. As a part of that project, road builders wanted to turn the “sandy stretch” between Perryville and Elkton into a macadam highway. The state legislature appropriated $40,000 for this endeavor. Construction on this 15 mile road connecting Perryville to Elkton began in 1913 and was completed the following year. Today we know this road as Route 7 connecting Perryville to North East. In 1916, what we now know as Route 213 was being upgraded into a major road to connect Elkton to the Eastern Shore. By 1921, Maryland has one of the best highway systems in the United States. The State employed over 2000 people to maintain these highways.

Howard Fink wrote a column on motoring for the Evening Star starting around 1912. He reported on routes and road conditions. After taking several road trips a year, his articles featured practical advice on this mode of travel. He wrote meticulous instructions on how to navigate through the different regions, often sharing photographs of his adventures. Since almost everyone at some point had to pass through Cecil County to get to points beyond, it was often featured in his articles. His reports were often uncomplimentary, as he wrote in May of 1913 that Cecil County was to be avoided due to muddy roads. He advised against night driving since the roads were pitch-black. In addition, if you needed assistance you would have to wait until morning, when horses would be used to pull your car out of the mud or sand.

Mrs. Olive Shultz, a suffragette who was driving from New York to Washington D.C., got bogged down in the Cecil County mud. With mud to her axles and 2 flat tires, she exclaimed the experience to be one of the worst of her life. However, by June roads were passable again. Fink then published instructions on how to navigate the roads from Perryville to Elkton. Motorists were told to cross the bridge at Havre de Grace and pay the $1 toll. Next you were to turn left at the blacksmith shop crossing the B & O Railroad tracks to Aiken to the fork of the road. The directions then took the driver through Battle Swamp, Catherine’s Corner, Rising Sun and on to Newark, Delaware. The roads were described a “ordinary country type”. A good stretch of road was 8 miles or so. However, if roads were impassable, this was reported, suggesting an alternate route.

Of course there was the local Cecil County tradition of sharing “short cuts” with travelers who stopped to ask for directions. Often these routes were 10 miles longer and full of mud, delaying travelers for over 2 hours. Speculation suggests this often delighted the local residents. Normally it would take about an hour to drive from Perryville to Elkton, without the help from the good citizens of Cecil County. The final stage to Newark, DE was over good macadam roads, easily completed inS 30 minutes. Traffic along the route was busy enough in 1914 that the Elkton Town Council set the speed limit as 12mph inside the town limits. Also mandated was that horns had to be used at all street crossings. No speeding through town was to be tolerated!

In May of 1915 a new record was set for the motoring trip between New York and Washington, D.C. Ed. B. Terry accompanied by Howard Fink, drove the 240 miles in 8 hours and 52 minutes. During the last leg of their trip, they had to stop in Elkton for gas, causing a delay of 14 minutes. Fink later wrote that if you couldn’t find gasoline along the journey, you could run your car on kerosene with a few adjustments to your carburetor. Many blacksmiths expanded their business opportunities by becoming mechanics and selling gasoline as well. Elkton became a regular stopping point for gas. But you had to be aware that if you got out into the wilds of Fair Hill, gas might not be available there.

You still must pass through Cecil County If you are traveling between Washington, D.C. and New York. Today’s obstacles are no longer mud and sand. However, heavy traffic and accidents can make it a challenging trip. But if traffic issues do take you off the major roadways into the backroads of Cecil County, I’m thinking you still might be able to find someone to direct you to one of the “short cuts” which will definitely add some time and interest to your trip!

The Historical Society is currently closed due to the COVID-19 pandemic, but we are looking forward to helping you with your research in the near future. You can still e-mail us with your queries at cecilhistory@gmail.com.