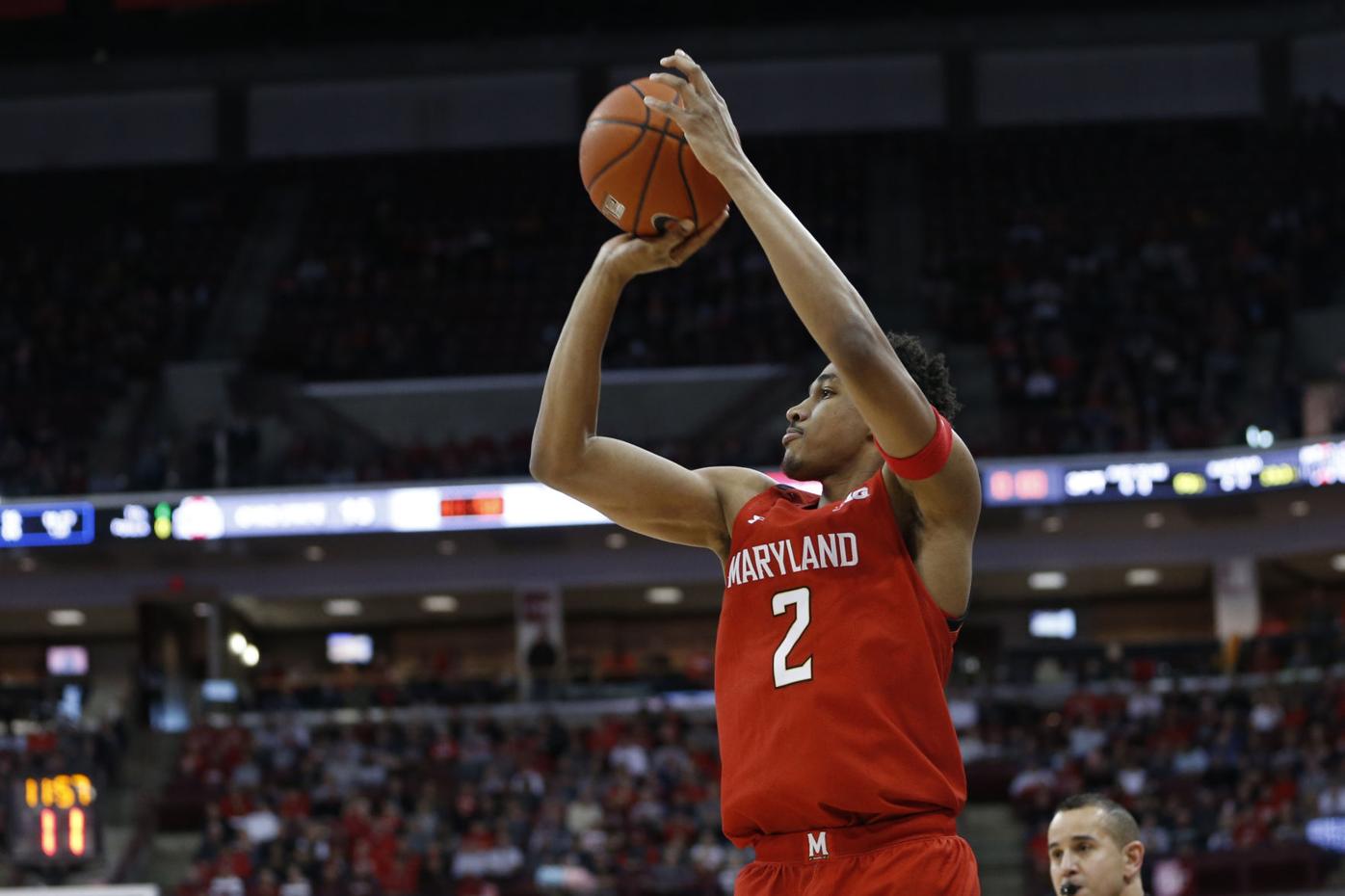 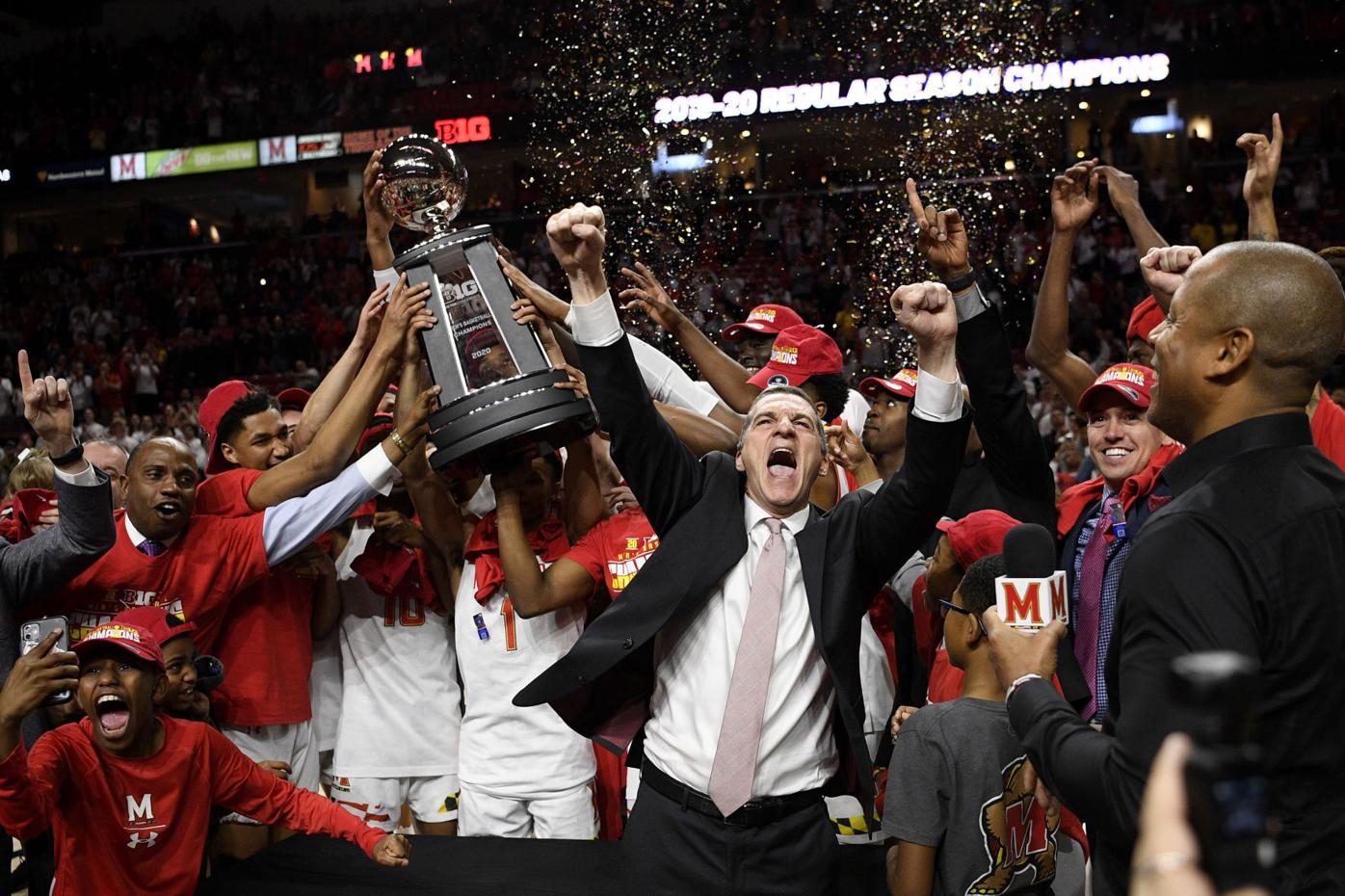 FILE — Maryland head coach Mark Turgeon, right center, and his team celebrate after they won a share of the Big Ten regular season title after defeating Michigan in an NCAA college basketball game in College Park, Md., in this Sunday, March 8, 2020, file photo. There would be no more basketball because of the spread of the coronavirus, making that the final game at Maryland for two of the key players on that team, guard Anthony Cowan Jr. and forward Jalen Smith.(AP Photo/Nick Wass, File)

FILE — Maryland head coach Mark Turgeon, right center, and his team celebrate after they won a share of the Big Ten regular season title after defeating Michigan in an NCAA college basketball game in College Park, Md., in this Sunday, March 8, 2020, file photo. There would be no more basketball because of the spread of the coronavirus, making that the final game at Maryland for two of the key players on that team, guard Anthony Cowan Jr. and forward Jalen Smith.(AP Photo/Nick Wass, File)

The last time Maryland performed on the basketball court, the players and coach Mark Turgeon were cutting down the nets and passing around the trophy awarded to the Big Ten regular season champions.

Many in the sellout crowd stormed the floor to take part in the celebration — none of them wearing a mask. Afterward, the Terrapins spoke excitedly about their first conference title (albeit shared) being the prelude to a deep postseason run.

Then came the coronavirus outbreak.

There would be no more basketball because of the spread of the disease. So that memorable victory over Michigan on March 8 turned out to be the final game at Maryland for the two best players on that team, guard Anthony Cowan Jr. and forward Jalen Smith.

With Cowan having used up his eligibility and Smith departing for the NBA draft after his sophomore year, Turgeon enters his 10th season at the school with plenty of depth but without the star quality that carried the 2019-20 squad to a Big Ten-best 24-7 overall record.

“I do think this can be one of our deeper teams since I’ve been at Maryland,” Turgeon said Tuesday. “It might not be our best. We’ll see. But we’re two-deep at every position right now, which puts us in a good spot.”

Cowan and Smith ranked 1-2 in scoring last season, followed by guard Aaron Wiggins, who could end up taking most of the shots from a backcourt that is the strength of the team.

Last season, it was easy to identify the team’s studs. Now, even after watching the team practice for months, Turgeon isn’t sure.

“I don’t know who our best players are and all that stuff,” he said. “The great thing for me as a coach is I can go in a lot of different directions. That’s what I’m most excited about.”

Wiggins, a 6-foot-6 junior, averaged 10.4 points last season, the only player besides Cowan and Smith to reach double figures.

He will be joined by senior Darryl Morsell and junior Eric Ayala in a three-man backcourt. With Cowan no longer in the mix, Morsell has stepped up to become the voice of experience on and off the court.

“Darryl Morsell has probably grown into a leader more than any player I’ve ever had,” Turgeon said. “It’s a natural thing for him. He’s real good at making practice competitive and kind of being a real jerk about it, but everybody respects the way he goes about it. All the players know he really cares about them.”

If 7-2 center Chol Marial can get over the injury problems he’s had in the past, the South Sudan native will provide the Terps with a potent shot-blocker and rebounder.

Marial joined the program in August 2018 and underwent surgery the following month to help repair stress fractures in both shins. He finally made his debut last December before playing sparingly the rest of the way.

“He’s almost pain-free. His legs are healthy, and he has a bright future,” Turgeon said. “We’re excited about Chol. He’s starting look like the Chol I remember coming out of high school a few years ago.”

The Terrapins are hoping another Mr. Smith will prove helpful in the front court. Alabama graduate transfer Galen Smith played in 31 games last season and previously participated in the NCAA Tournament with the Crimson Tide.

“He was well coached down there,” Turgeon said. “He knows where to go offensively. His maturity has really helped us.”

In addition, 6-8 forward Jarius Hamilton arrives from Boston College after appearing in 54 games, including 28 starts, over two seasons.

Turgeon is still waiting to find out the team’s schedule for the 2020-21 season. He knows the Terps open at home against Old Dominion on Nov. 25 and face Clemson on the road in the Big Ten/ACC Challenge on Dec. 9, but beyond that nothing has been determined for sure.

“Our schedule should be coming out soon. Who knows when?” Turgeon said.