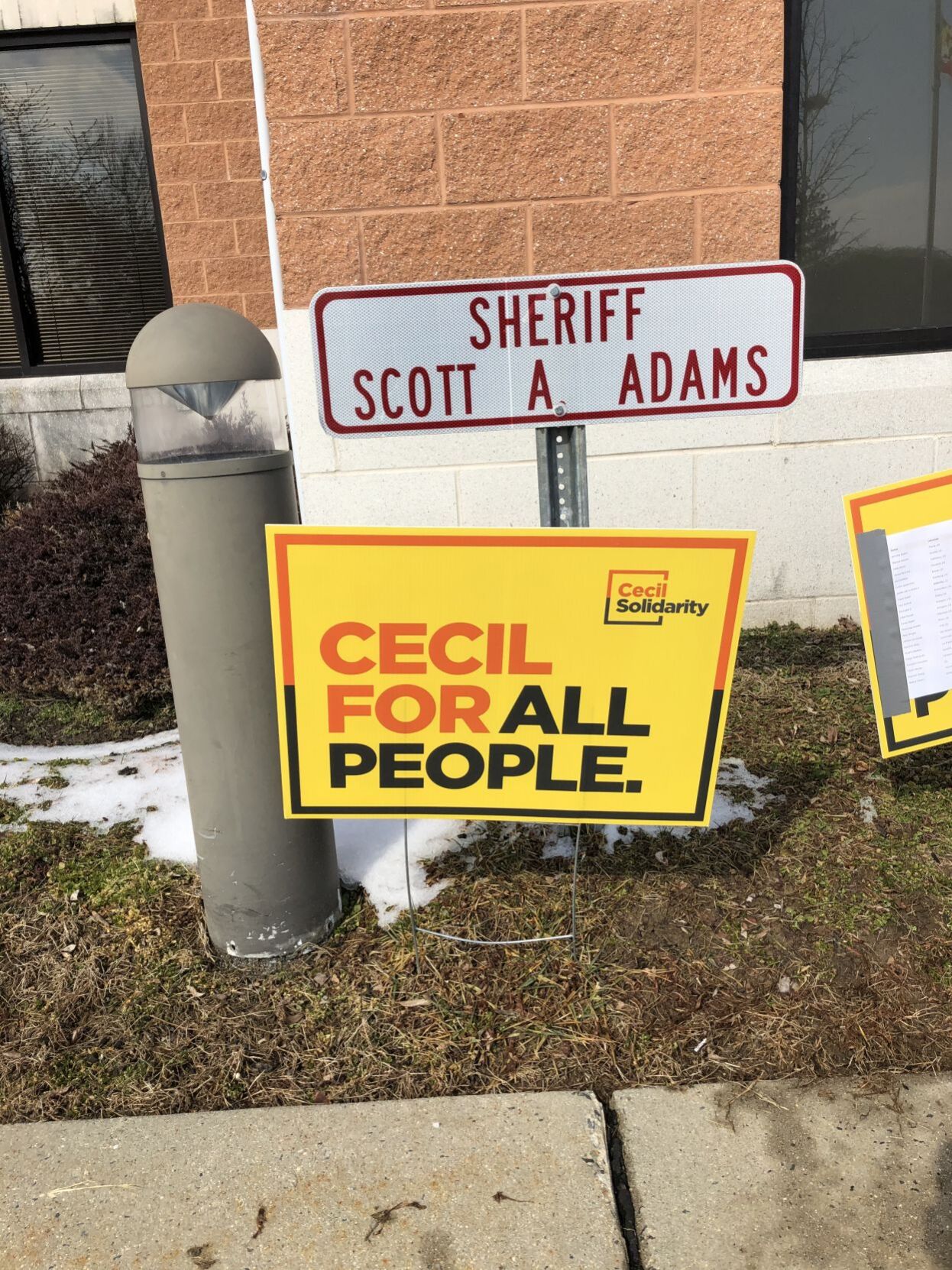 Cecil Solidarity organized a protest in front of the Cecil County Sheriff’s office Saturday to demand the firing of Corporal Bryan Shockey. 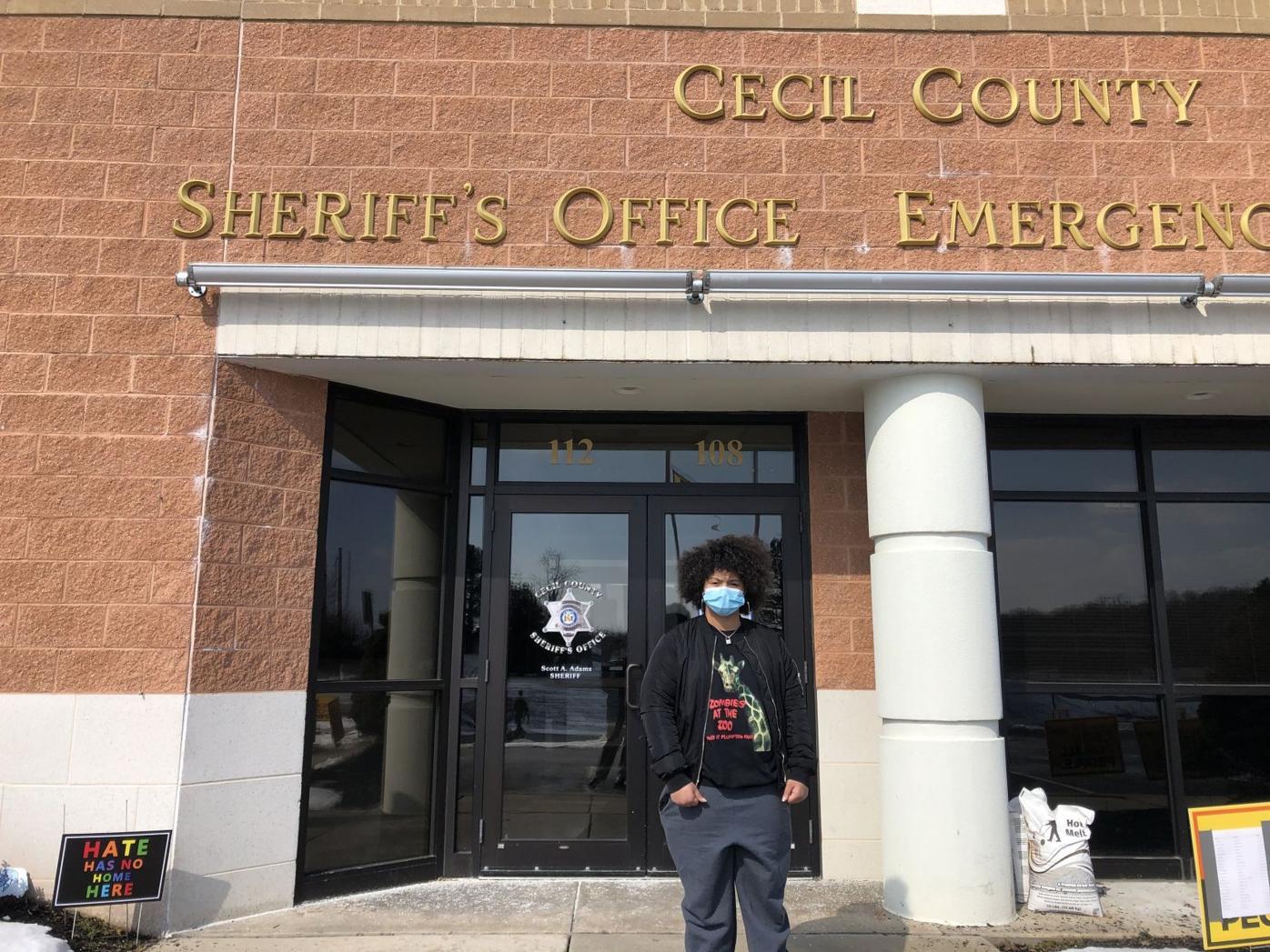 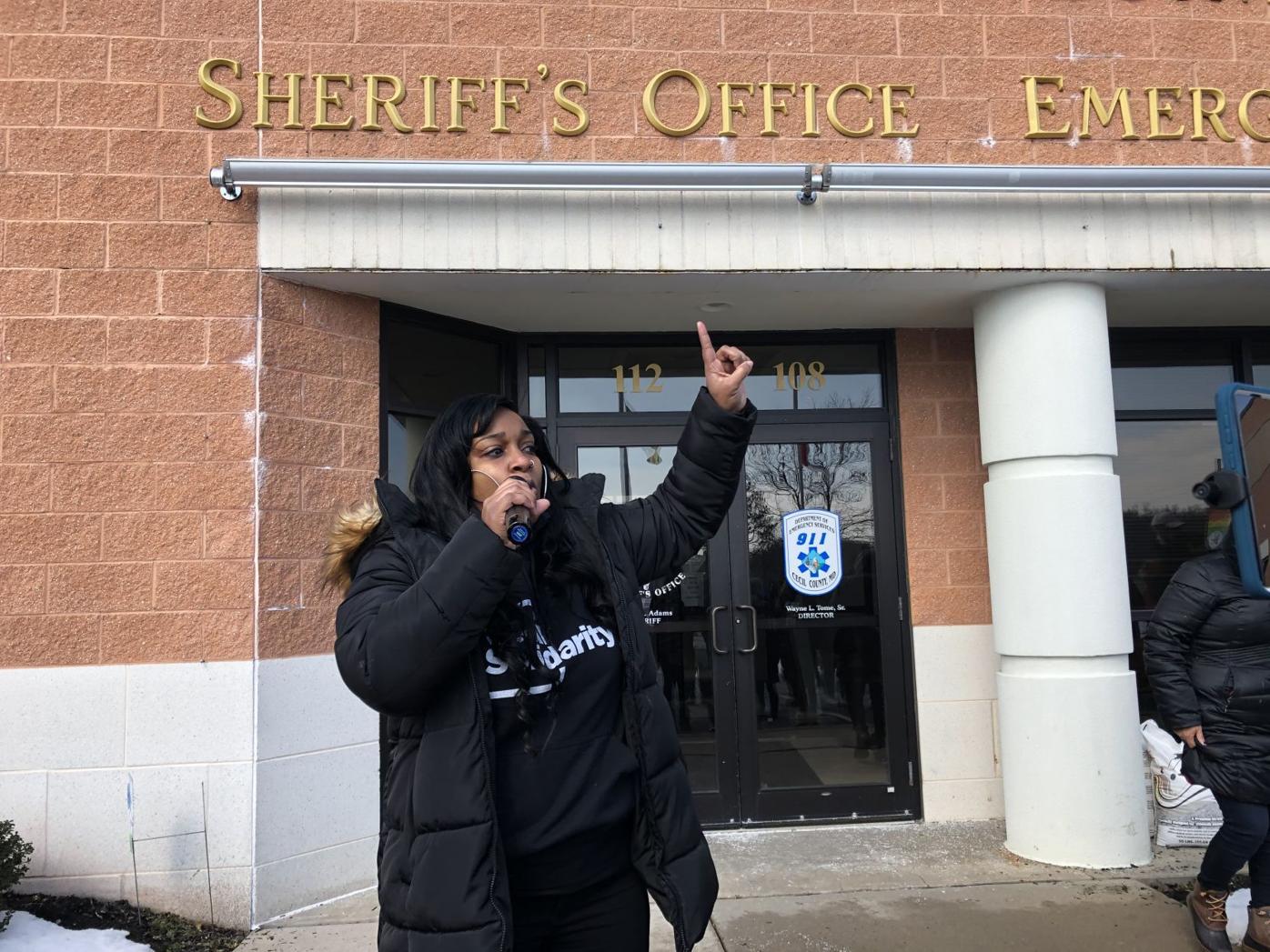 Cecil Solidarity President Christine Givens speaking in front of the Cecil County Sheriff’s Office in a protest on Saturday. 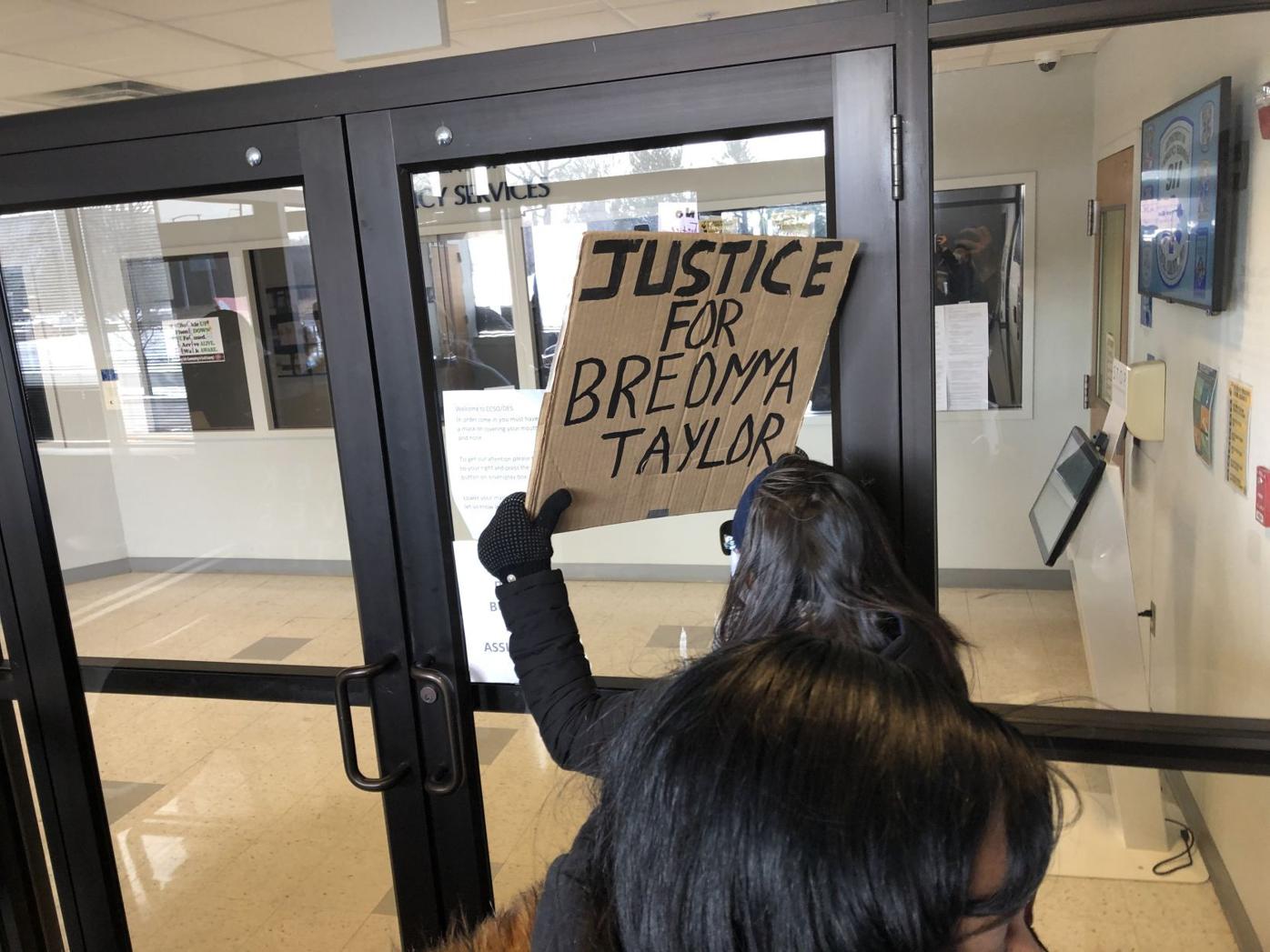 Cecil Solidarity organized a protest in front of the Cecil County Sheriff’s office Saturday to demand the firing of Corporal Bryan Shockey.

Cecil Solidarity President Christine Givens speaking in front of the Cecil County Sheriff’s Office in a protest on Saturday.

ELKTON — On Saturday, around 65 people gathered in front of the Cecil County Sheriff’s office to demand Corporal Bryan Shockey’s firing. Cecil Solidarity organized the protest after the release of dashcam footage showing Shockey using what they consider to be excessive force during a traffic stop against Tyreke Collier.

After marching from a parking lot at the end of Konica Dr., Cecil Solidarity members gathered outside the Sheriff’s office, placing signs across the yard and parking lot. After several speeches, the group went inside the office and after an attempt to reach a receptionist through the call box failed, they duct-taped their demands to have Shockey held accountable to the door along with signatures from people who signed a change.org petition to fire the Corporal.

Cecil Solidarity released the dashcam video last month, which, along with the petition, garnered over 3,800 views on YouTube.

The dashcam footage from July shows Shockey and two other deputies pulling over Collier. Cecil Solidarity said it’s an incident of racist police brutality, with Shockey antagonizing and then assaulting Collier. Cecil County Sheriff Scott Adams said that the stop was entirely lawful, and that the incident would have been prevented if Collier compiled with Shockey.

“When he first pulls them over, he says about Tyreke and his significant other, “they both look shady as (expletive),” said Tim Rothermel, an organizer with Cecil Solidarity. “That doesn’t sound to me like an officer is ready to de-escalate a situation.

In the video, Shockey asks Collier to get out of the car to have a K-9 unit sniff the car. Collier asks why he needs to leave the car and why Shockey thinks it’s necessary to have a dog search his vehicle. Shockey responds by saying that he doesn’t need a reason.

Collier opens the door and gets removed from the car by Shockey and two other deputies. The Sheriff’s office said Collier kicked the door open with his feet to strike Shockey. Adams pointed to how Shockey is still on medical leave because of the injuries he received.

“I’m upset by their (Cecil Solidarity’s) actions because Corporal Shockey was injured in that incident and is still out from injury,” said Adams.

Cecil Solidarity said the dashcam footage shows that the Sheriff’s office is inaccurate in their assessment of Collier’s reaction. They said Shockey is at fault for antagonizing Collier and then throwing him out of the car.

“The injury was minor at best. You can read in the draft report that it was a tingling sensation in his right hand,” said Rothermel. “So let’s not play it up for sympathy for an officer that clearly escalated the situation from the beginning. I mean, the way that stop went down is entirely on Corporal Shockey because he is the one that is supposedly trained for these interactions.”

A search of the car found nothing, and Collier was charged with two counts of assault on an officer, a charge of resisting arrest, and a charge of obstruction. These charges were placed on a stet docket, so they are currently inactive but can be reopened. Adams said Tyreke was guilty of two traffic charges, speeding and driving on a suspended license.

Rothermel first heard about the incident from Collier, who contacted Cecil Solidarity for help.

During the rally, Givens said that the video is proof that an incident similar to the murder of George Floyd could happen in Cecil County. The Sheriff’s department had previously put out a statement condemning the Floyd killing and the callous disregard shown for his life by the officer. Several speakers referenced the letter, saying that Collier’s treatment and how the Sheriff did not discipline Shockey indicates that the department is not committed to change.

“The performative nonsense he does needs to cease,” said Givens. “If he doesn’t care, just say it. I’d rather him be honest than say de-escalation is something they practice all the time.”

The crowd was a diverse one, with many parents even bringing their children. One notable speaker at the march was 12-year-old Keiana Giersch, who read a poem about her reaction to police brutality.

“This isn’t right. My people are still fighting for basic human rights,” said Giersch. “I walk down these streets thinking no justice no peace we’ve got all these racist police.”

Giersch first became involved with Cecil Solidarity after George Floyd’s death. Her mom posted a poem she wrote on Facebook, and Cecil Solidarity reached out after reading it. She said the march was scary since it represented how police brutality exists in her home.

“You wonder why I’m in this mindset,” said Giersch. “You should confess and have consequences for your actions Corporal Shockey.”

Cecil Solidarity organizer Beth An Griffin said it was the group’s first protest since the presidential election.

“I have two young black sons. They don’t always make the best choices,” said Beth An Griffin, an organizer with Cecil Solidarity. “but you’re not going to pull him out of a car because you feel like it.”

Adams said Shockey’s use of a K-9 unit to search the car was enough reason for him to force Collier from the vehicle. He said Shockey did not need to provide any specific reasons to justify his use of the K-9.

“I would always prefer that we give as much information as we can on the scene,” said Adams. “I’m not saying that it couldn’t have been verbalized better to him, but I go back to the compliance of things. If you’re questioning the legality of things on the scene, that’s what court is for.”

The complaint process and review of force processes are contained entirely within the Sheriff’s office, without an outside auditor. Rothermel said the complaint process is useless because of a lack of standards, so people with grievances often don’t bother to complete the form.

Adams emphasized that he believes that citizen compliance would reduce the use of force incidents.

“Use of force would be reduced so much if people comply on scene. I understand that people have rights and have questions but on the roadside on scene is not the best place to be non-compliant,” said Adams. “This is a perfect example of an incident that caused injuries to one of my deputies that could have been avoided several times when compliance was asked for.”

Rothermel said the emphasis on compliance shows that the police are more interested in making the public fear them rather than serving citizens’ interests.

“When police officers say just comply no matter what they ask, it really runs contrary to the motto police have to protect and serve,” said Rothermel. “If you expect compliance without an explanation, it’s clear that you’re not really here to protect and serve. When Adams says just comply he’s suggesting that police are here to be feared and obeyed by citizens, instead of being in service to them.”

“People comply all the time and still end up getting shot,” said Rothermel. “The way Shockey was acting. The safest place for Tyreke was inside that car.”

Adams said that firing Shockey would be a complex bureaucratic process since an officer can appeal to review boards and has protections through collective bargaining and state regulations like the Law Enforcement Bill of Rights. Currently, Adams can only suspend an officer for up to three days without the officer being able to appeal to a hearing board.

“There is room for improvement, but I don’t think you can just throw all the protections away,” said Adams.

Rothermel argued that part of the reason it’s hard to fire officers like Shockey is because Adams opposes curtailing police protections like the Law Enforcement Bill of Rights.

“He’ll cry that his hands are tied, but any time he can support that bureaucracy, he’ll do it,” said Rothermel.

When the protest ended as the crowd returned to the parking lot outside of the Cecil County Administrative Office, two people from the Sheriff’s office went outside and took down the signs directly outside the door and in the parking lot.