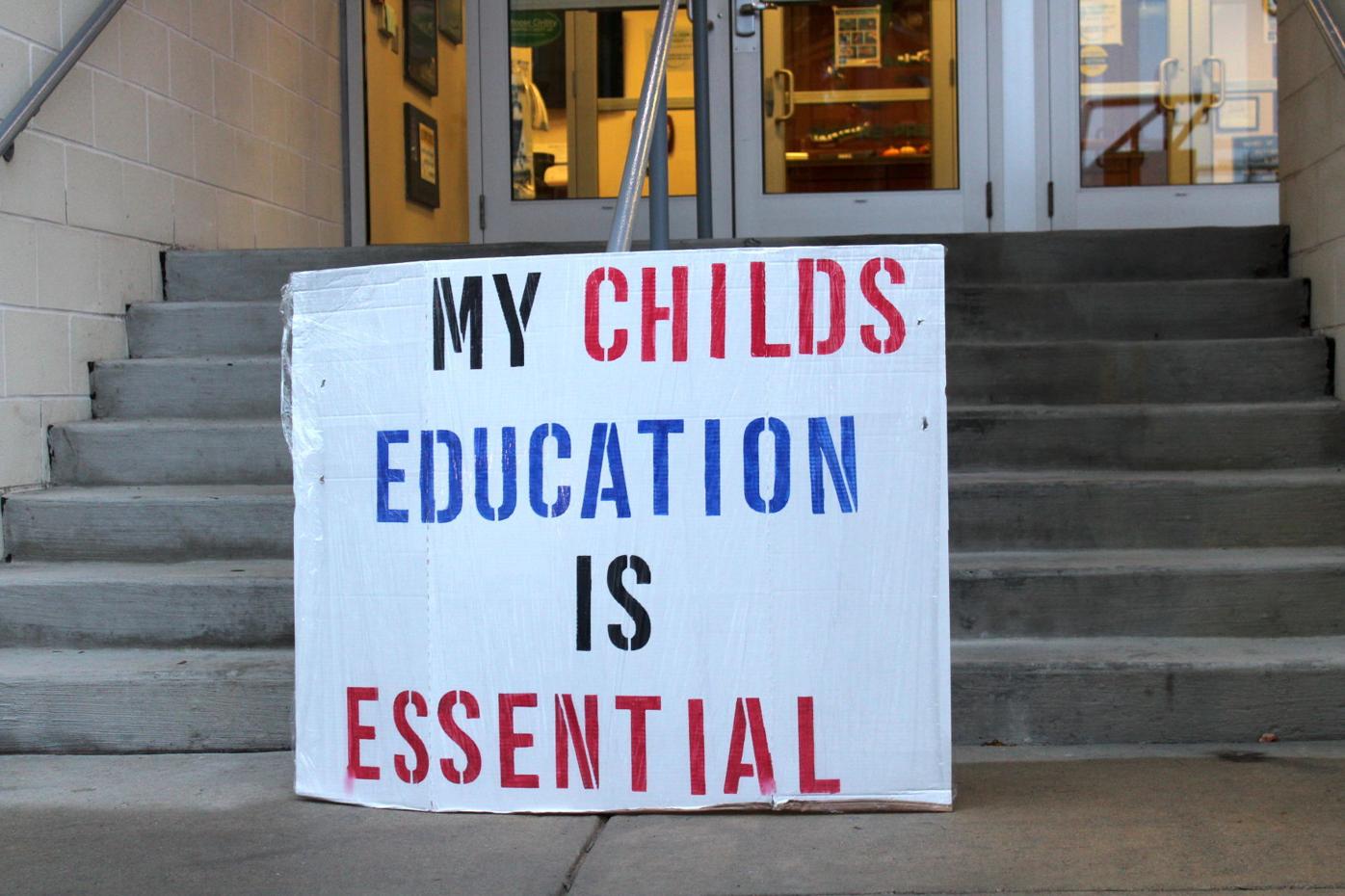 A sign left outside the Harford County Public Schools AA Roberty administrative building after a group of parents and students gathered in October 2020 to demand a faster reopening. 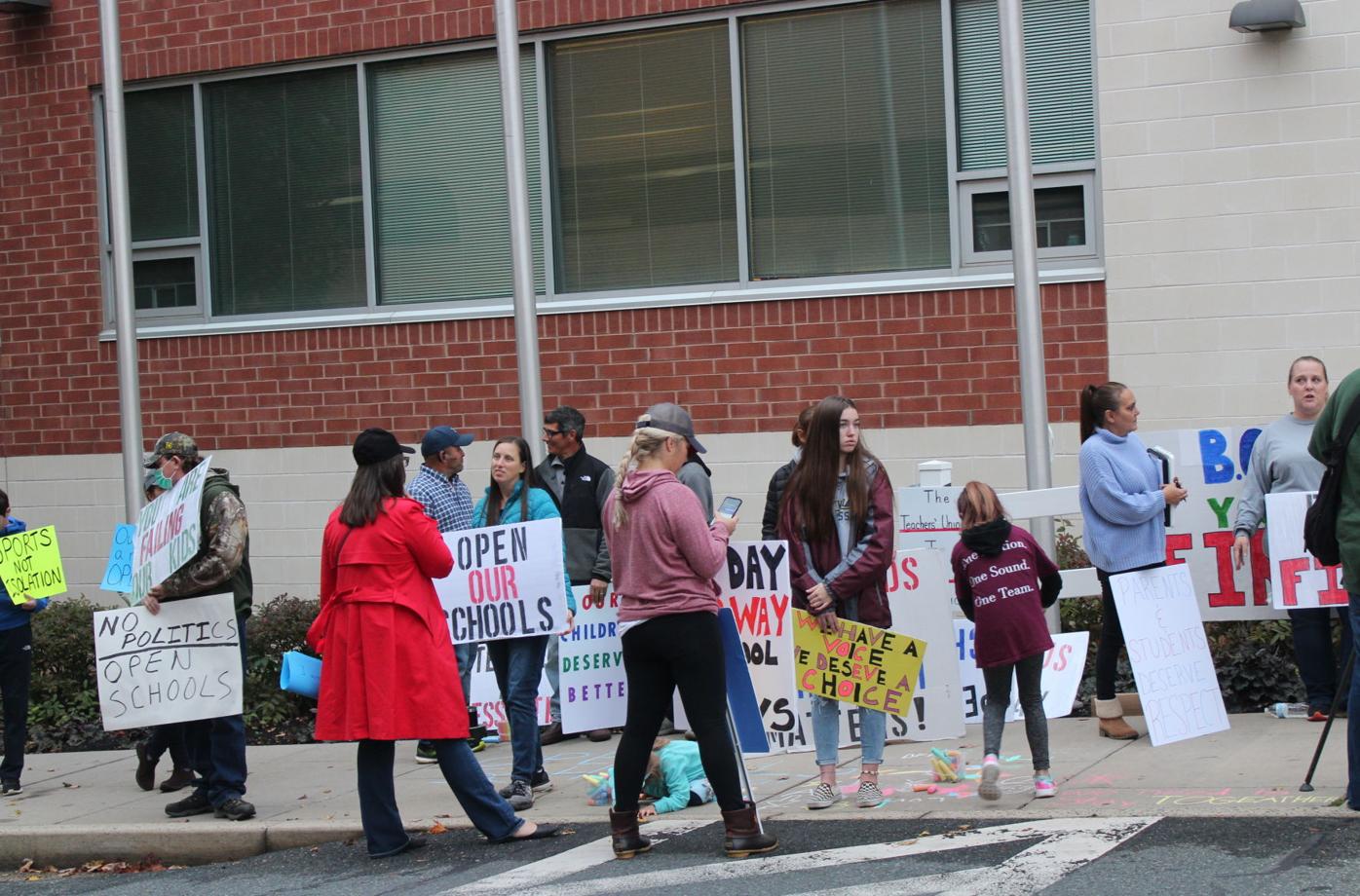 Demonstrators gathered at a Harford County Public Schools meeting in October to demand a faster reopening.

A sign left outside the Harford County Public Schools AA Roberty administrative building after a group of parents and students gathered in October 2020 to demand a faster reopening.

Demonstrators gathered at a Harford County Public Schools meeting in October to demand a faster reopening.

BEL AIR — Harford County Public Schools (HCPS) is gearing up for a twice-weekly reopening beginning next month, an abrupt shift from its previous once-a-week plan that followed increased pressure from state authorities and community members.

HCPS Superintendent Sean Bulson said in a board of education meeting last week that the district is seeking a compromise to balance the safety concerns regarding reopening with the fears many parents share about learning loss among students.

“This is not ideal for anybody,” Bulson said. “I understand the perspectives everyone brings, whether it’s those who are more concerned for their safety and concerned about moving in or those who are tremendously frustrated with virtual learning and being at home.”

With a large number of elementary educators having already received vaccines, elementary students will be among the first to return, alongside students with special needs or those who face other learning barriers.

For months, HCPS has wavered at the cusp of reopening with no small hesitation, eyeing the county’s once-surging COVID-19 metrics with some concern, facing staffing shortages due to mandatory quarantines and facing deep-rooted fears among some staff about the risk of contracting the virus at school and bringing it home.

But the rollout of reopening seems to be gaining steam in the district, with Bulson setting his sights on a broader reopening in the not-too-distant future.

“Beginning of April, our hope is to be able to bring our elementary students into schools up to four days a week,” Bulson said. “We’re recognizing that we won’t, in all cases, be able to maintain the full six feet distancing.”

Frustration with changing state guidance, including removal of recommended thresholds for safe reopening from the Center for Disease Control, was a key factor in clearing the way for reopening, and the subject of much discussion among members of the board.

“We’ve had ambiguous, or essentially little to no support from the governor and the state superintendent, and when we do receive information from them, it is in the form of a directive with a very short timetable to turn around and change the entire process,” said board member Sonja Karwacki. “I would compare it to attempting to nail jello to the wall.”

Last month, Gov. Larry Hogan urged schools to pursue at least partial reopening, threatening legal or budgetary action if they failed to do so by March 1.

Hogan’s message in some ways flipped previous state guidance indicating that schools should not reopen if the rate of community spread remained above certain thresholds — thresholds the county consistently exceeded for most of last year. The governor also shifted on social distancing, indicating that fewer than six feet of distance could be acceptable in schools.

Board member David Bauer argued that the appearance of the district constantly shifting its reopening plan results from a responsiveness to new guidance, pressures and priorities.

“I understand the decisions that the administration has made to be in line with the guidance and information that has been available,” Bauer said. “Maryland has generally chosen to emphasize the risks of the pandemic over the risks of virtual only learning.”

Others, like board member Patrice Ricciardi, defended Bulson and his leadership team for that responsiveness, which she said has always guided their pursuit of a safe reopening option.

“I’m very impressed with the school system and the work that’s going on behind the scenes,” Ricciardi said. “We’ve really come so far in two weeks, and we are moving as fast as we think is safe.”

Board Vice President Rachel Gauthier lauded Bulson, saying he is in the right place at the right time to take on this challenge. She said the same thing about her fellow board members in an apparent attempt to bolster morale after reports of harsh, aggressive or targeted rhetoric made by some parents and community members against the district leadership.

For Gauthier, the ultimate goal must be to see students return full-time.

“It is all of our goals to get kids and teachers back in the building five days a week,” Gauthier said. “However, we do need to make sure it is done safely.”

How can we do that?

Roy Phillips, a board member and leading local health care worker, said that there must be widespread collaboration among community members to keep the county’s COVID-19 spread at bay.

Amid the turbulent changes of the last year, Phillips said, sticking to practices proven to help mitigate spread of COVID-19 has been a constant.

He himself has practiced what he preaches — he said he has not traveled further than Anne Arundel County to visit his grandkids since February 2020, has not eaten inside a restaurant since March 13, 2020 and has had a total of six people in his home, including his daughter and her family of four, since March.

“We need to help in the community to keep [schools] open,” Phillips said. “If there is accelerated spread in the community that will eventually migrate into the schools, there potentially could be schools shut down, and no one wants to see that.”