Get Started
You are the owner of this article.
Edit Article Add New Article
Home
News
Sports
Obituaries
Opinion
Features
Our Cecil
Business
Cecil People
Classifieds
Contests
The Bargaineer
1 of 8 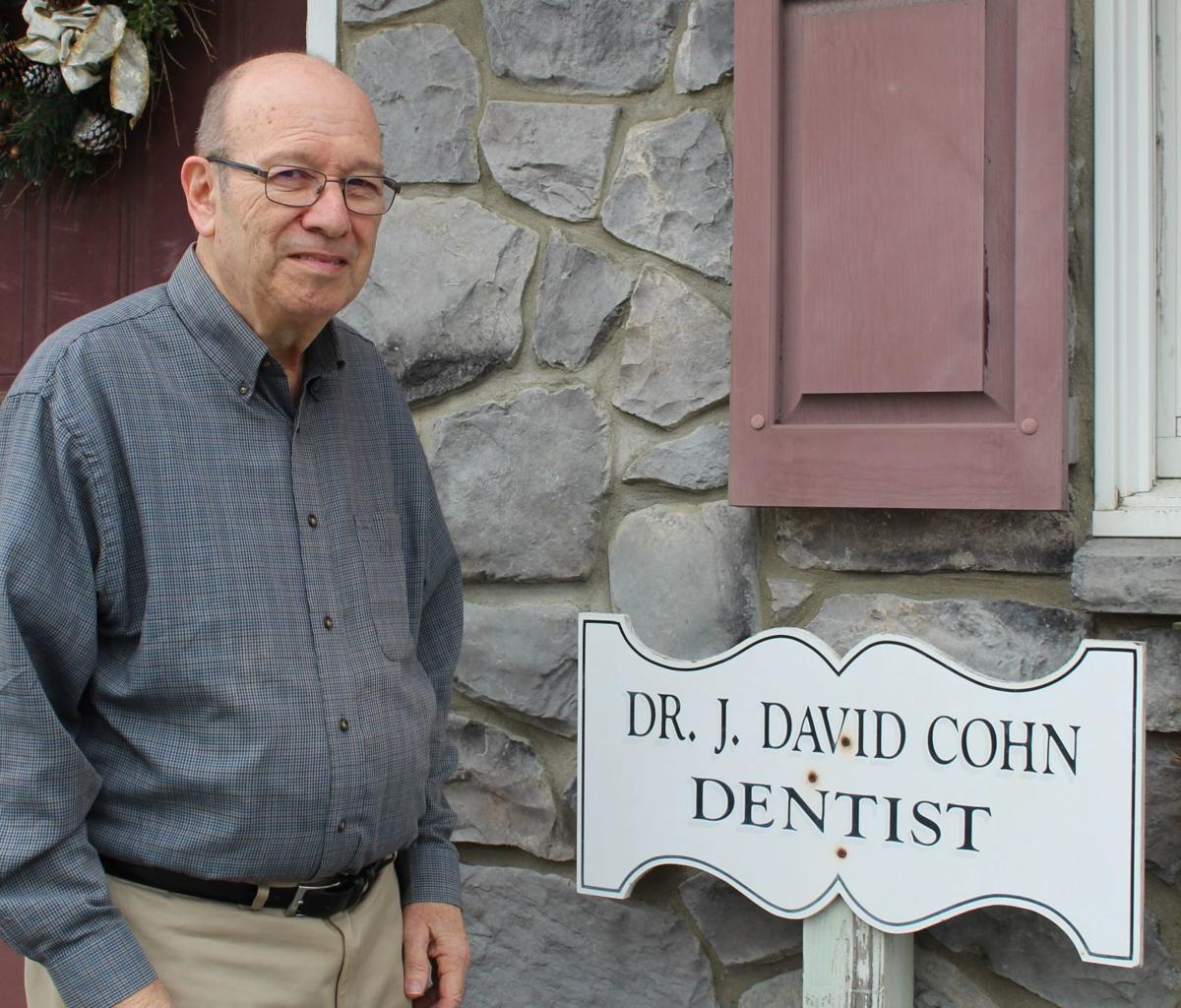 Dr. J. David Cohn saw his last patient at his Cecilton office last week and has sold his practice to Summit Dental in Middletown, Del. 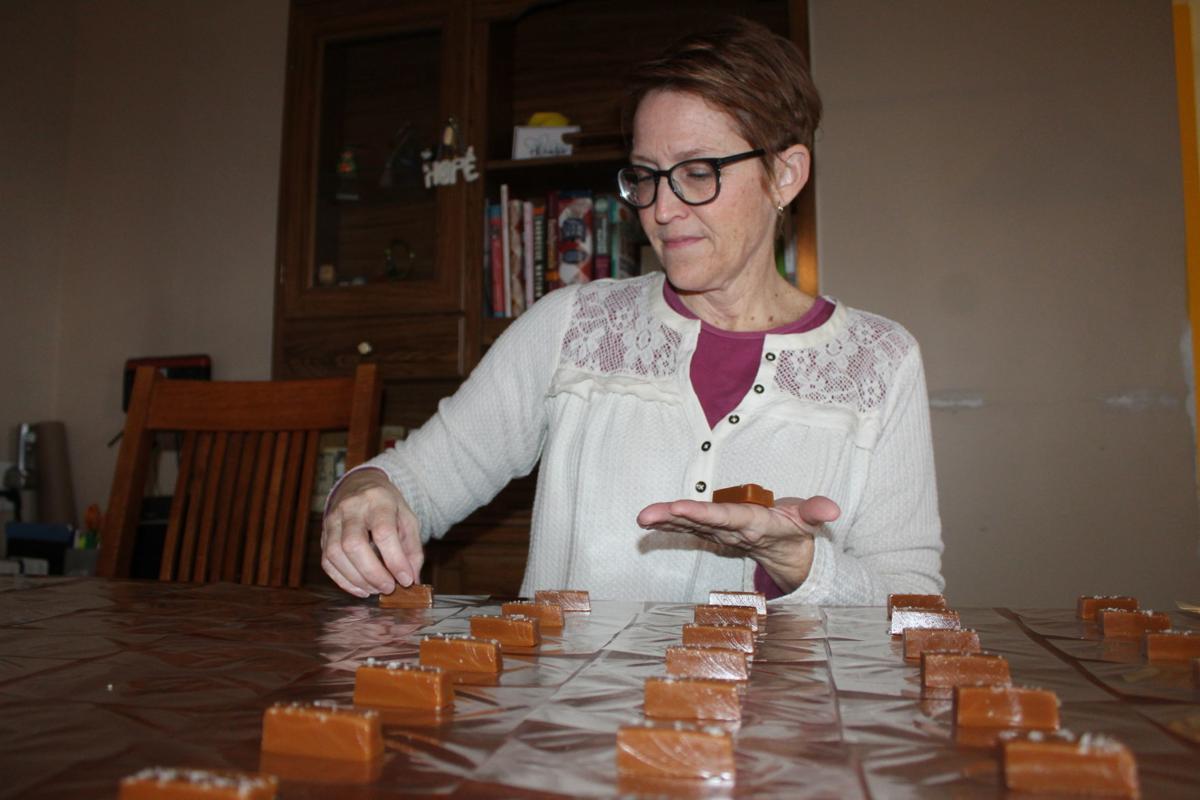 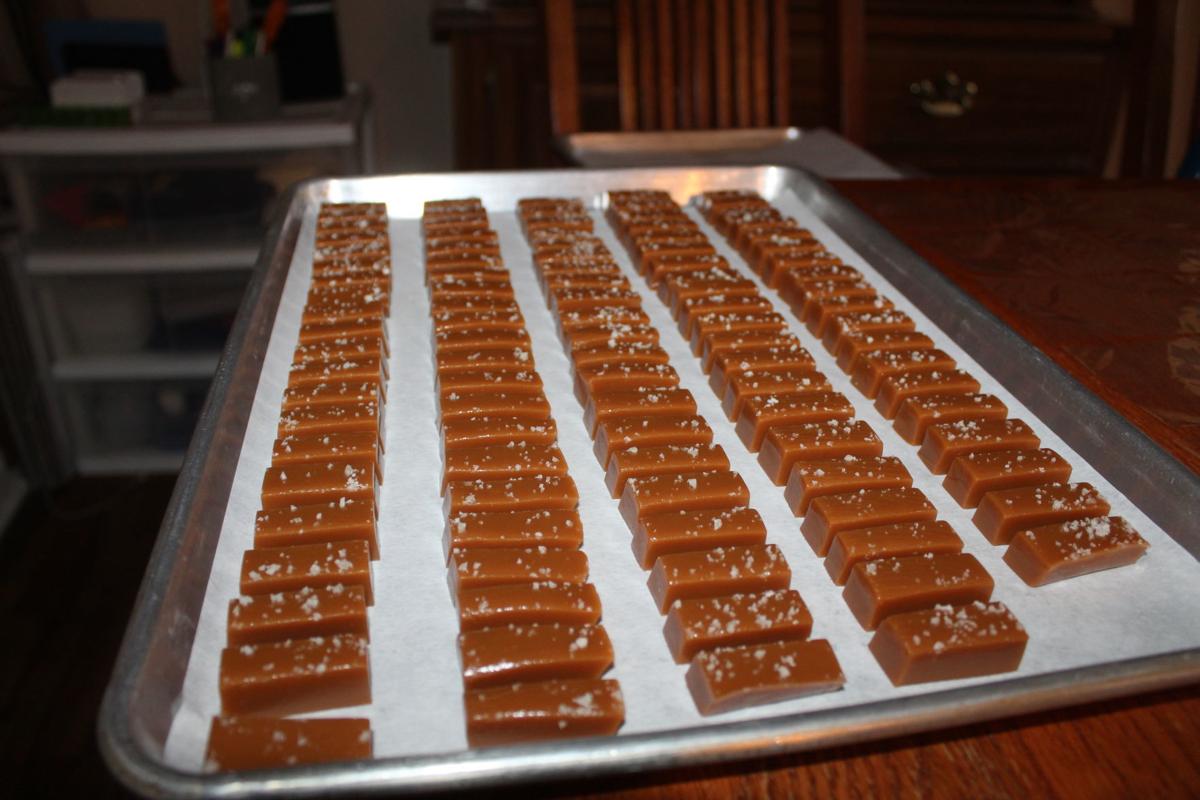 A tray of cut caramels are sprinkled with sea salt before being hand wrapped in biodegradable paper. 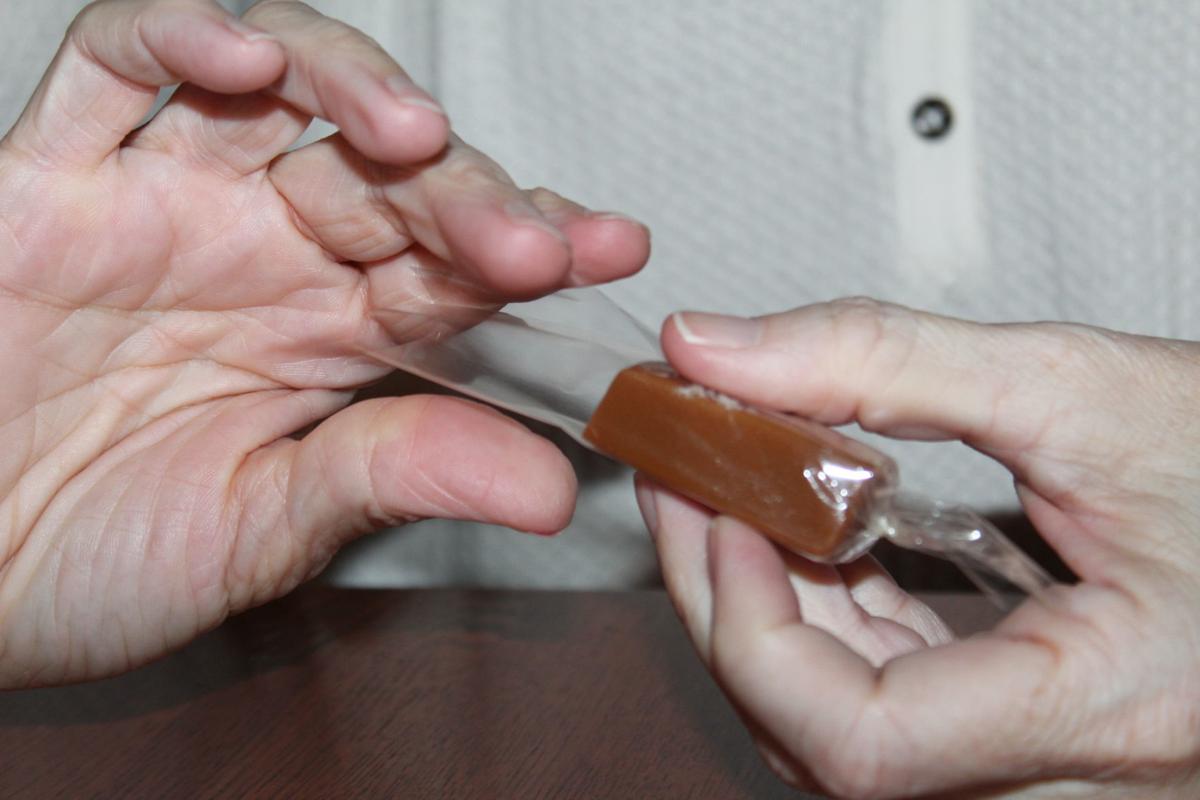 Hope Shuert is adept at placing a soft rectangle of her “Hope’s Caramels” in a piece of clear plastic and twisting each end secure. 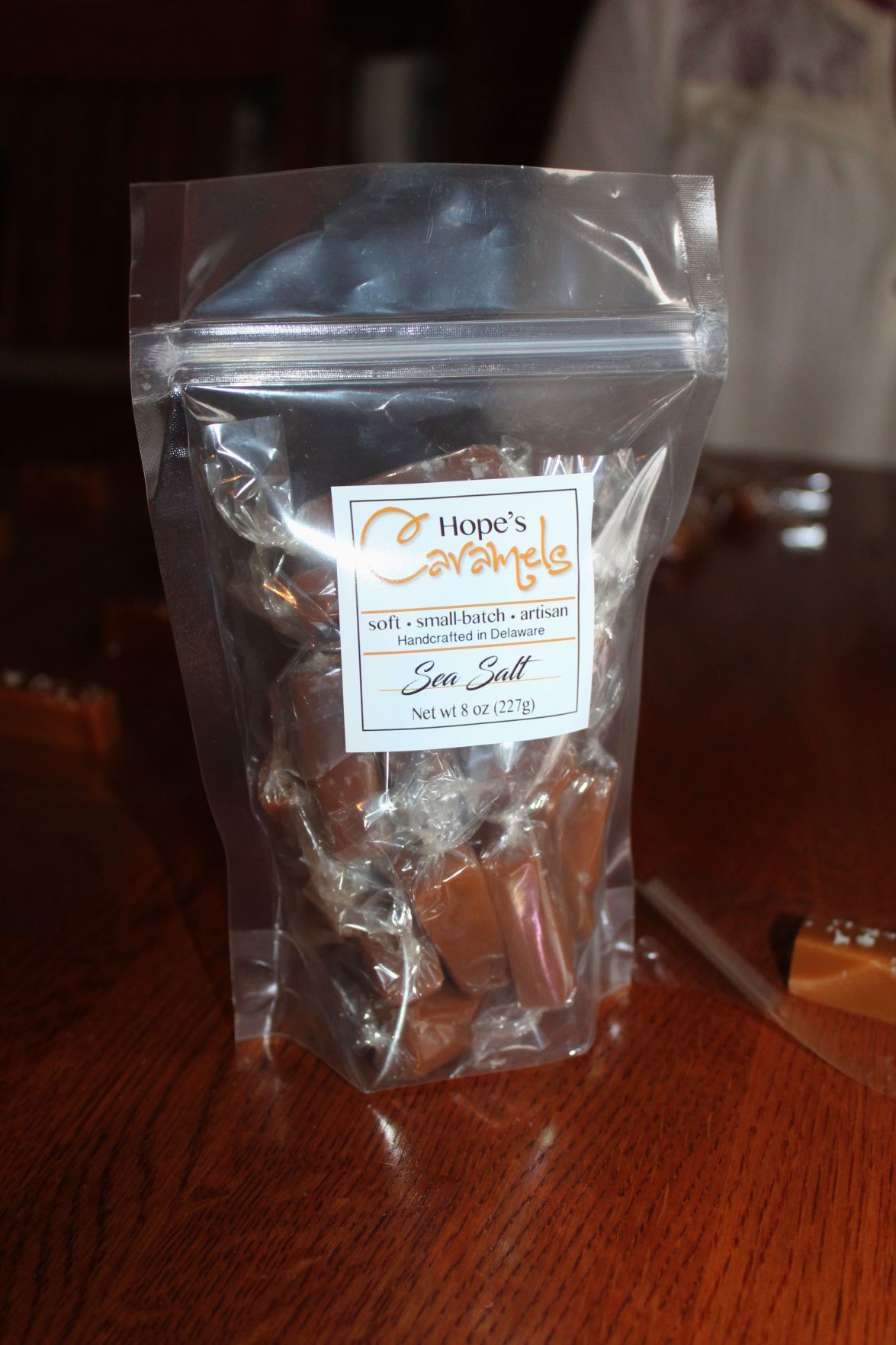 Just in time for Valentine’s Day, Hope’s Caramels are packaged in 1/2-pound bags to “Bring the sweet life to everyone” in accordance with the company motto. 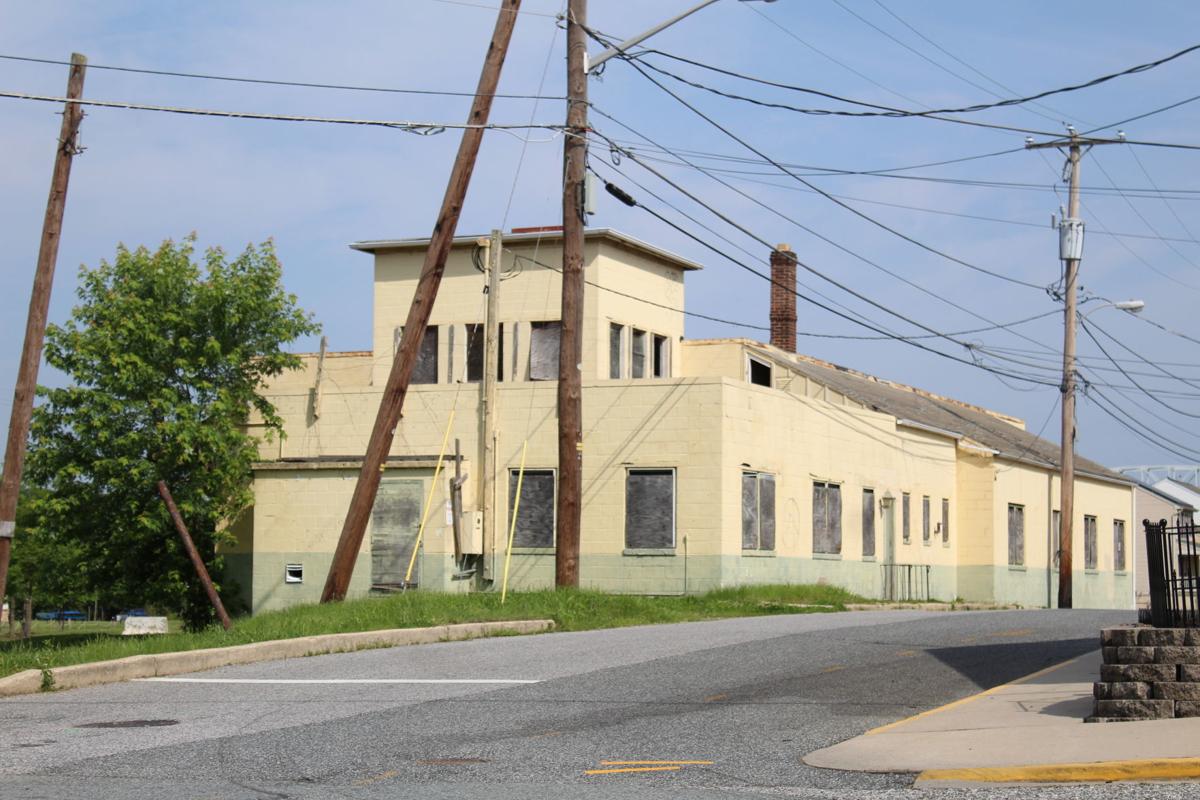 The owners of 5th Company Brewing in Perryville are seeking an easement from the town for its outdoor dining deck.

Dr. J. David Cohn saw his last patient at his Cecilton office last week and has sold his practice to Summit Dental in Middletown, Del.

A tray of cut caramels are sprinkled with sea salt before being hand wrapped in biodegradable paper.

Hope Shuert is adept at placing a soft rectangle of her “Hope’s Caramels” in a piece of clear plastic and twisting each end secure.

Just in time for Valentine’s Day, Hope’s Caramels are packaged in 1/2-pound bags to “Bring the sweet life to everyone” in accordance with the company motto.

The owners of 5th Company Brewing in Perryville are seeking an easement from the town for its outdoor dining deck.

Dr. J. David Cohn has seen his final patient at his Cecilton dental practice and is looking forward to a different kind of work from now on.

“I’ll be able to garden better,” Cohn said happily from his now quiet office on South Bohemia Avenue. “I do a lot of flowers and potted plants.”

Cohn said he won’t be leaving the town he has called home for the past 46 years.

“This is where my kids and my four grandkids are,” he said.

He discovered Cecilton as a child when driving through en route to the beach with his parents.

“We always saw Washington College and my dad would always say, “One day I’ll send you there.” And he did,” he said. He got a degree in chemistry at the Chestertown college, then went to University of Maryland School of Dentistry. After a stint in the US Navy he found himself back in Cecilton sharing a dental practice with another dentist.

“Bill Ullman had a practice here on Wednesdays and Saturdays,” he explained. When Ullman moved on he bought the building and the practice. “I had to find a bank to lend me the money.”

Cohn said his long time patients have seen his retirement coming. Any day now each will receive a letter informing them that their patient records have been transferred to Summit Dental in Middletown, Del. Dr. Peter Karian, owner of Summit Dental, is also a University of Maryland Dental School graduate.

According to Cohn dentistry has made huge strides in oral care, not the least of which is digital x-rays and dental implants.

“Especially the advent of plastics and composites,” he said. “I’ve hardly used any amalgam (metal fillings) on a patient in four years.”

He will miss the relationships he has built with his patients over the years, he said.

“Those people are friends,” he said.

He would encourage new dentists to make those connections as well, and not just with their patients.

“Be involved with the community,” he said. “When I first came to town I was in the dunking booth for the (Cecilton) fire company carnival.”

Cohn is looking for a buyer for the building at 121 South Bohemia Avenue, which includes a second floor apartment.

If you were a member of the Elkton High School Class of 1991 you may remember Hope Stevenson and are wondering, “Where is she now?”

Search Etsy or Facebook for Hope’s Caramels. Now living in Claymont, Del. Hope is known as Hope Shuert and she and her husband Brady crank out tons of soft caramels for sale in shops, online and at events.

After the birth of her first child she began baking custom cakes and cookies. It was one particular item that changed her course.

“I used to make a salted caramel cupcake with a caramel center,” Shuert said. Brady took some to work and someone there had a request, “Can I get the caramel cupcakes without the cupcake?”

“That was the birth of Hope’s Caramels,” she said. Experimentation began to find the recipe for a caramel that was easy to cut, soft to chew, and did not stick to the wrapper.

Now in its 6th year, her chewy treats have been sent to Canada and Okinawa Japan and traveled with folks to the country of Georgia.

“Mailing them to Canada it was $30 in caramels and almost $50 in shipping,” she said.

There are numerous flavors, most of which change seasonally. However, always available is the sea salt, chocolate, vanilla, spicy, and coffee. The spice, if you are interested, is a ghost pepper salt. Seasonal flavors include egg nog, blood orange, and chai spice.

Caramels are sold by weight at $15 per pound or $10 per half pound. There’s even a Caramel of the Month Club, which will automatically send you or a friend a sweet package every month for 4, 6 or 12 months. She sells variety gift boxes for Valentines Day and other holidays.

“We made 8,000 pieces per week for Christmas; hand cut and hand wrapped,” she said. Each is packaged in bio-degradable wrappers.

On top of that, the Shuerts have dedicated 10 percent of the proceeds to charities aimed at ending human trafficking.

“I would like to hire victims of human trafficking, give them a fair wage and a better life,” she said. Look for that to happen once Hope’s Caramels has completed the permitting and construction of a commercial kitchen in the basement of their home.

Contact Hope’s Caramel’s through Facebook, which will direct you to the Etsy page for ordering. Or look for Hope’s Caramels at Winterthur Museum gift and book shops, ChristianaCare Hospital’s gift shop and Vintage Pantry.

Walmart is changing the operating hours of its two Cecil County locations effective Feb. 1 and doing away with 24-hour service.

A statement issued by the Arkansas-based headquarters indicates the change was necessary.

“We’re continually looking at how we can best serve our customers,” the statement reads. “Based on a recent review of shopping patterns at our North East and Elkton stores, we will be adjusting hours and reallocating resources to better serve our customers during peak shopping periods.”

Starting Feb. 1 the stores will close at midnight and reopen at 6 a.m.

The Walmart in Oxford, Pa. and on Wilton Boulevard in Newark will continue to operate 24 hours.

5th Company Brewing in Perryville has submitted paperwork in town hall for a zoning certificate according to Dianna Battaglia, planning director.

“If the certificate is approved they will need to address stormwater, etcetera,” Battaglia told the mayor and commissioners at a recent work session.

The certificate is needed to allow the business to construct an outdoor dining deck on its property at the corner of Front and Broad Streets.

“For the deck to be safe for customers ... it’s going to encroach on Lower Ferry Park,” she said. The owners are asking for an easement for 624 square feet.

Commissioner Pete Reich told the board that the town’s planning and zoning chair — George Jack — would probably not approve a permanent easement.

“He suggested giving it only to the current owner,” Reich said.

“If another owner comes in he has to ask for it,” Taylor said of the easement. Taylor said he could agree to allowing the easement as long as the business stays a restaurant. Mayor Robert Ashby agreed.

“If this were ever to change to a warehouse for example, it would revert back to us,” Ashby said.

Appearing before the Cecil County Board of License Commissioners last year, the owners of 5th Company Brewing, Brandon Phillips, Mattias Schmid and Philip Lembo, said they expect to open for business around Memorial Day 2020.

PLC Paramedics is available for anything from routine maintenance to a system crash.

Based in Elkton, Matt Hess and his crew of four come to your shop and fix the systems that run your equipment.

“The P-L-C stands for programmable logic control,” Hess, the founder and owner, explained. “We’re the company that runs your machinery.”

That machinery could be doing anything from manufacturing, to wastewater treatment to plant security, Hess said. PLC Paramedics does work in correctional facilities making sure that the locking mechanisms work.

PLC Paramedics also offers routine maintenance of your systems, which should include back ups.

“That’s my main message. People need to have back ups,” he said, adding, “The real value is in your data.”

Hess offers a free initial on-site evaluation because, in his words, “a lot of customers don’t know what they have.”

The nod comes from the ANSI (American National Standards Institute) National Accreditation Board and the American Society for Testing and Materials.

“Becoming ANAB accredited means that our training program meets the highest of standards, so this accreditation is a huge achievement,” said Neely Law, Director of Education and Training at the Center for Watershed Protection.

Through the training participants learn best practices for stormwater run off, including how to spot and replace outdated systems with “green” infrastructure to better protect the environment and natural resources.

Those who complete the training get help through a workforce development partnership to find jobs using their newfound skills.

Interested individuals or employers in need of staff training should contact CWP at 410-461-8323 extension 3216 or go online to cwp.org. The Center for Watershed Protection is based in Ellicott City, Md.