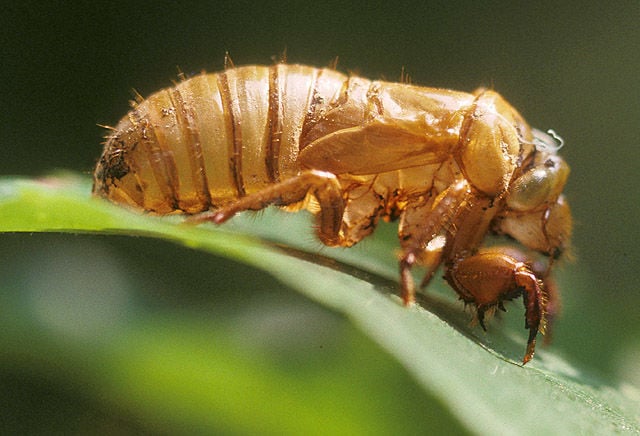 These 17-year cicada nymphs will start to be seen in May on trees all over Cecil and New Castle counties. They are not poisonous or harmful. 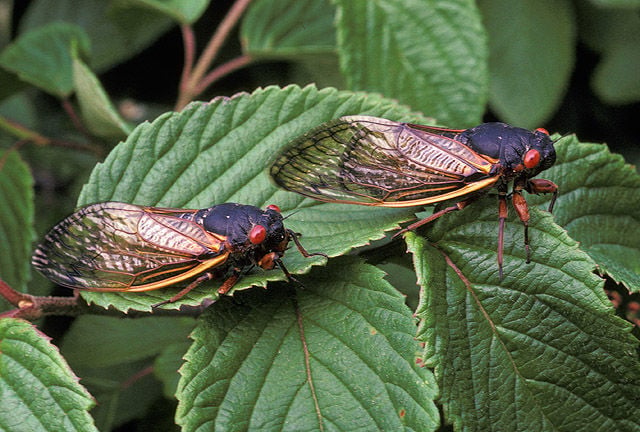 Once out of their brown nymph shells, these adult 17-year cicadas will spend several weeks from May through June mating and the females will lay eggs. The eggs will drop to the ground and start burrowing in, to return in 17 years.

These 17-year cicada nymphs will start to be seen in May on trees all over Cecil and New Castle counties. They are not poisonous or harmful.

Once out of their brown nymph shells, these adult 17-year cicadas will spend several weeks from May through June mating and the females will lay eggs. The eggs will drop to the ground and start burrowing in, to return in 17 years.

ANNAPOLIS — If you live in Cecil or New Castle counties get ready for an insect phenomenon seen every 17 years.

Experts from the Maryland Department of Agriculture and University of Delaware Cooperative Extension say the magicicada septendecim is only seen for a few weeks every 17 years and it starts in May.

“Depending on how warm it gets is how soon we’ll see them,” said Gaye Williams, an MDA entomologist.

And when they do emerge, it’s going to be epic.

“There will be hundreds of thousands, if not millions,” she said of the insect, which most will remember from the carpet of crunchy shells left behind in years past.

Look for holes in the ground from which the cicadas emerge and begin their single-minded goal of procreation.

“They feed on roots,” Williams said of that 17 years spent underground. “Their goal in life is to make more cicadas and they seem to do it very well.”

Coming out of the ground the insects migrate to a vertical surface — typically a tree — and start moulting. Leaving behind an outer brown shell their wings unfurl. Within a few days they will seek out a mate and then the females lay eggs.

“The females lay their eggs in the twigs of trees,” Williams said. In mature trees little damage is done. Brian Kunkel, an Integrated Pest Management specialist with UD, said on mature trees you will notice the smallest branches look broken off. It’s called “flagging” because the broken end of the branch will flutter. This does not affect older trees.

It’s the new trees for which you may need to be worried.

“On your new or recently planted trees (in the past year or so) you could potentially have cause for concern,” Kunkel said. That’s because the younger trees may not tolerate having its branches snapped off when the female cuts into the bark to lay her eggs. “If you are so inclined to cover your young trees it’s probably not a bad idea.”

Williams suggests toule, a fine, lightweight fabric you can find in any fabric or craft store. Cover the tree and fasten the fabric at the bottom so the cicadas cannot crawl up the trunk to the branches.

Once those eggs reach nymph stage they drop from the branch.

“Those that land on the ground hopefully immediately dig in,” Williams said. The mating and egg laying recurs for several weeks, ending in late June or early July.

Perhaps the reason that cicadas lay so many eggs is because, per capita, not many survive, Kunkel said.

“It’s a protein source,” he said. Even dogs find them delicious.

“Everything eats them from the second it falls out of the tree,” Williams said. As the cicadas reach each stage of development it becomes a different food source for bacteria, worms, and birds to name a few.

“In Kentucky they put them on pizza,” Kunkel said, indicating humans eat the cicadas in some circles.

“They are free fishing bait,” he said, adding that blue gill, bass and crappie can’t resist the insects if offered in the proper fashion.

“Take the weight off your line. Run a hook through the insect and cast. It will look like it’s floating on the surface,” Kunkel said.

While some may be uncomfortable with the sheer numbers of the crunchy shells left behind, not to mention the noise made en masse for three to four weeks, Kunkel said the cicadas are no threat to crops, they don’t sting, they are not poisonous, and they won’t try to get in your house.

“They are an amazing phenomenon,” Williams said of the native species. Unlike the fears of damage from stink bugs, spotted lantern flies and emerald ash borers, the 17-year cicada is harmless.

“There’s nothing to worry about,” she said. There’s no need to spray them or launch wholesale efforts to crush them.

If you feel the need to scoop up the shells Williams suggests placing them in your compost pile if you have one.

“They are great organic fertilizer,” she said.

If you need to know more go to the Cooperative Extension Service’s new “Ask An Expert” webpage: https://ask.extension.org/ask

Just as the 17-year cicadas go back underground, Kunkel said the annual cicadas will re-appear.

“They are nowhere near as numerous and they are green,” he said. “You’ll see them suffering on your sidewalk.”