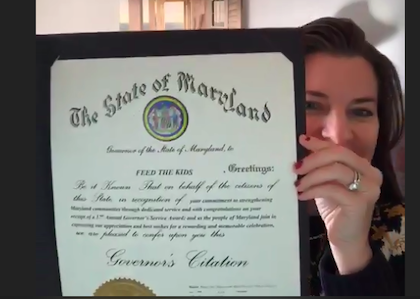 Jessica Berstler, one of the volunteers behind Feed The Kids, shows others in a recent Zoom meeting the Governor’s Citation the group was awarded. 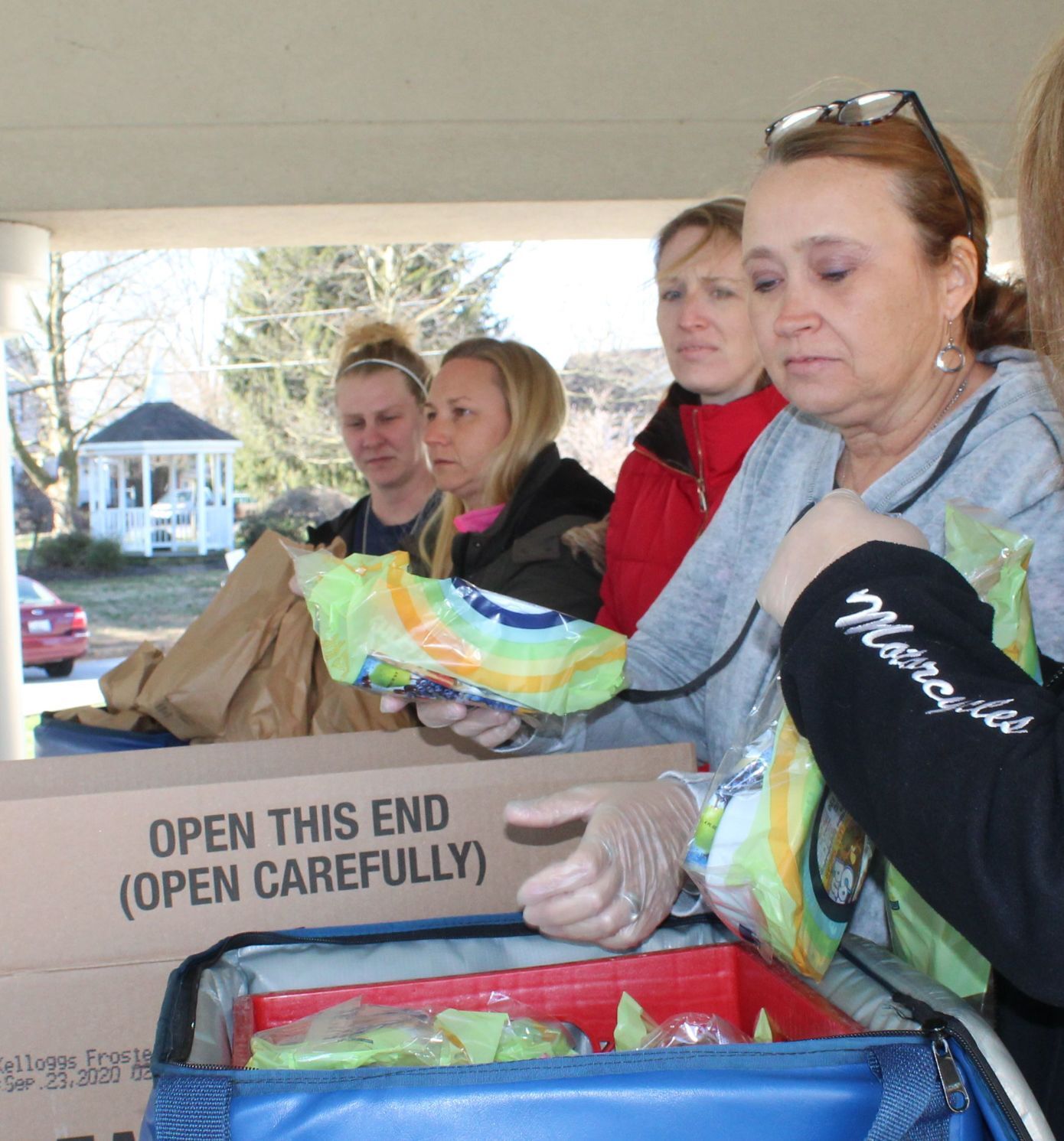 In the early days of the pandemic that shut down Cecil County Public Schools Feed The Kids Spring 2020 emerged as a volunteer effort to help hungry students gain access to breakfast and lunch they would have received at their home school. While Cecil County Public Schools set up the food pick up locations, Feed The Kids made sure kids that could not get to the pick up sites got their food delivered.

Jessica Berstler, one of the volunteers behind Feed The Kids, shows others in a recent Zoom meeting the Governor’s Citation the group was awarded.

In the early days of the pandemic that shut down Cecil County Public Schools Feed The Kids Spring 2020 emerged as a volunteer effort to help hungry students gain access to breakfast and lunch they would have received at their home school. While Cecil County Public Schools set up the food pick up locations, Feed The Kids made sure kids that could not get to the pick up sites got their food delivered.

ELKTON — Feed The Kids Spring 2020 has been recognized by the Governor’s Office on Service and Volunteerism as a Pandemic Response Champion for the way it stepped up to help get food to students who could not get to the home school when COVID-19 first shot down Cecil County Public Schools.

During an online chat volunteers that were part of that effort got a first look at a citation from Maryland Gov. Larry Hogan.

Jessica Berstler opened the large envelope and pulled out the certificate honoring “Feed The Kids” with a Governor’s Citation naming the group a 2020 Pandemic Response Champion.

“During a time of self-isolation due to COVID-19, Feed the Kids created not only a way to serve children in need — they created community,” Hogan said in a video announcing the award. “Feed The Kids offered residents a simple way to give back during a time of crisis and disconnection. And they did it without applause.”

Feed The Kids was one of only three to be saluted by the governor for their community service during the pandemic.

Those participating in the Zoom chat were pleased to see the citation, but wondered where it should be displayed. That’s because Feed The Kids not only never had an official headquarters, they have now essentially disbanded.

“It’s a perfect problem to have” Berstler said of their retired status.

Berstler, Jennifer Langeluttig, Sarah and Larry Sickles, Travon Morgan, and Steve Phillips were a small part of the larger machine that delivered more than 320 meal kits weekly to CCPS students that needed the food the schools provided.

When the schools were first shut down chatter erupted on social media with concerns about the students with transportation issues, who may have no way to get to their home school and pick up the breakfasts and lunches.

“Several of us parents in Perryville were worried. We knew there was a need in Perryville and obviously this need doesn’t end in Perryville,” Langeluttig said. She and Phillips started the ball rolling, calling on folks they knew with specific skills.

“I talked to Perryville Fire Company and town hall and asked, could they help with storage,” Phillips said. The could not. However when he reached out to the school board ahe learned there was work being done on grant funding to purchase food.

Work continued to delegate what the volunteers expected would be a monumental task of getting deliveries to those with food insecurity.

“I called my über-organized friends,” Langeluttig said. “We realized CCPS was going to do something ..and we reached out to them and said, can we work on this together?”

“Steve was out relentless IT guy, Jess was our admin. She set up the documents and the email and a hotline number,” she added. “Not to pat ourselves on the back but I credit them for our level of facilitation.”

At first they all believed this would be a short-term issue.

“We started this to help kids for a few weeks,” she said. It brought to light to three-fold problem of many Cecil County families: food insecurity, transportation and access.

Families would self identify through a Facebook page and the person in charge of their service area would connect and set up the delivery. The schools provided the food and the Feed The Kids volunteers made deliveries to those who could not get to the school for pick up.

Sarah and Larry Sickles, both teachers in the county schools, were joined by other teachers in the effort. Sarah said once teachers began distance learning she got permission from her principal at Elkton High School to continue the work around her class schedule.

For Berstler all the activity was normalizing.

“At a time when we didn’t know what to do it gave me a little bit of routine and purpose,” she said.

Sarah Sickles considered it a way to regain some sense of control.

“The world was upside down. I felt there was so much at stake,” she said. “We just wanted to make sure the kids had food.”

They kept it going over the summer to maintain a level of connection with their students. Sickles recalled on one delivery the young recipient had a question.

“When are we going to have Cinnamon Toast Crunch again?” was the question.

“As educators our job is to teach but we also worry about the whole child,” Sickles said. “We make sure they have a coat in the winter time and do they have food.”

Now that CCPS has established its own system of food delivery and pick up Feed The Kids is out of business.

Still the volunteers are in awe of what has been accomplished just through the sheer act of caring about others.

“When the real world called ... the way we stepped in was amazing,” Phillips said. “Kids were hungry. People pitched in.”

He was happy that the process did not get bogged down in the bureaucracy or politics.

And if something like this happens again they all agreed Cecil County would see Feed The Kids re-emerge.

“If a need is identified we would do anything we can,” Berstler said.