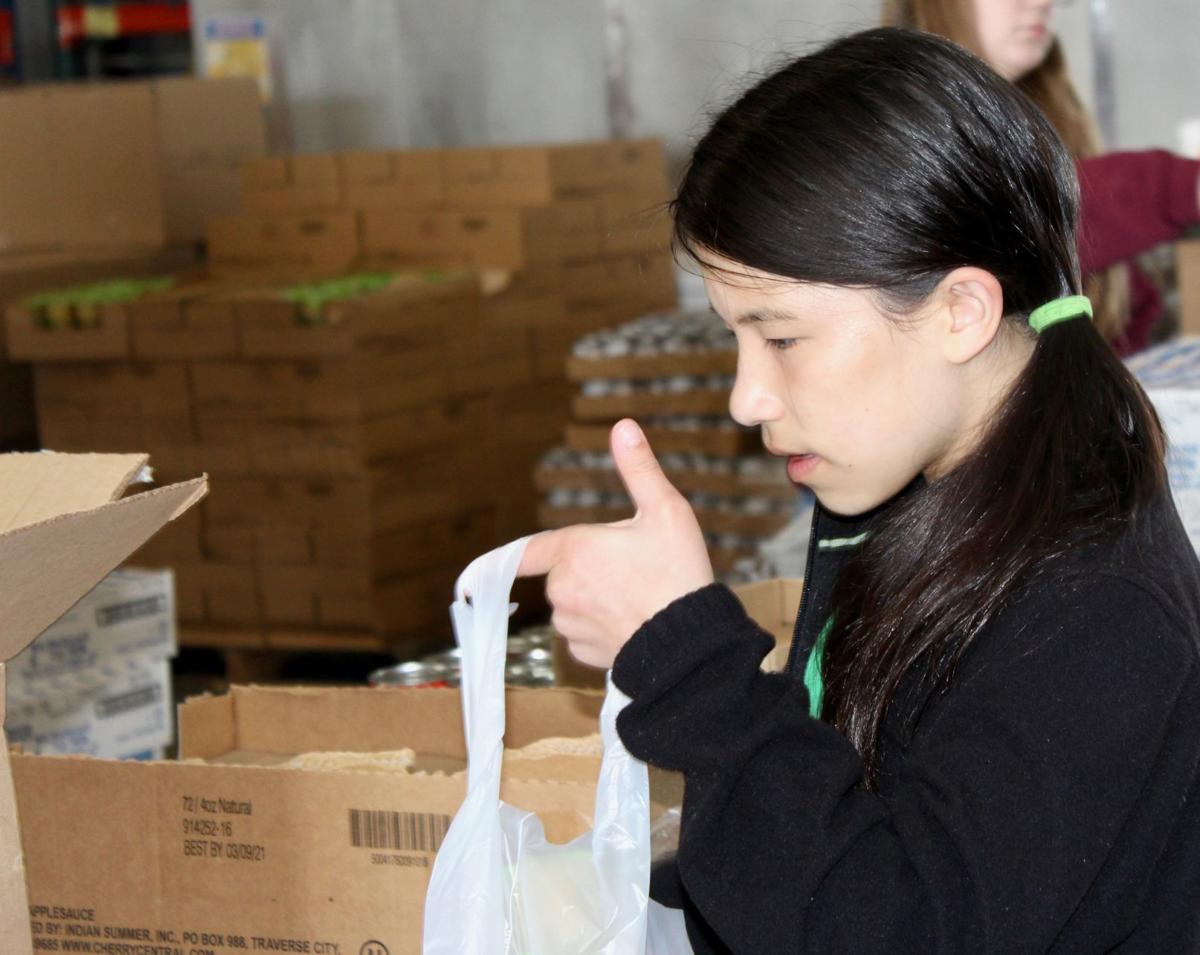 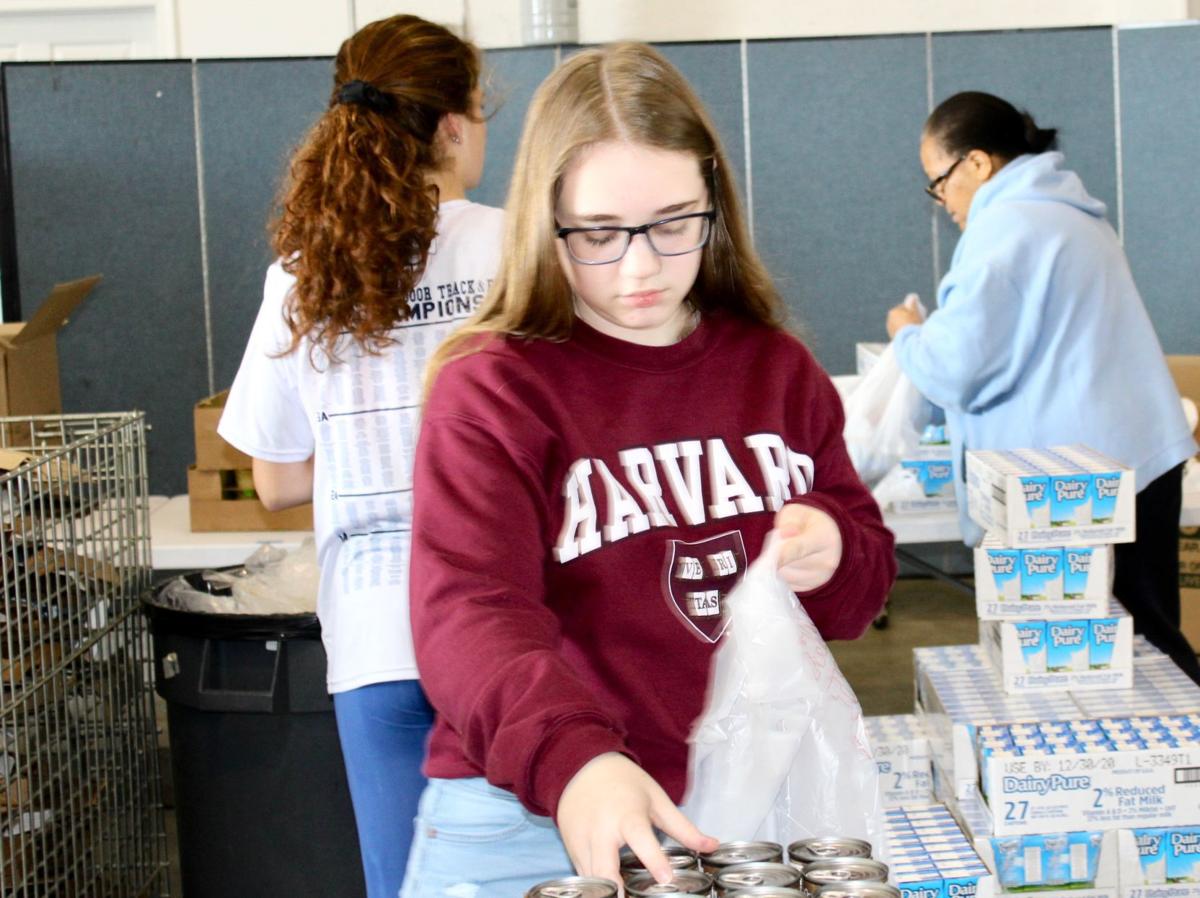 Volunteer Dihana Winter places items in plastic bags for distribution for students in need of meals.

Volunteer Dihana Winter places items in plastic bags for distribution for students in need of meals.

It was supposed to be “The Year of End Hunger” in Calvert County. However, as it is globally, the coronavirus appears to have claimed 2020 for its own.

The county’s army of volunteers are undaunted.

On Tuesday, End Hunger in Calvert County had its hands extended and anything but idle as a crew comprised of mostly local middle school students bagged packages of nonperishable food to distribute to fellow students who, due to the lengthy closure of school, are doing without the system’s daily meal.

The group gathered in the early afternoon at the organization’s warehouse at the Calvert County Industrial Park.

“We’re going to keep going until they go back to school,” said the Rev. Robert P. Hahn, the senior pastor of Chesapeake Church.

The church’s effort to aid local working families who couldn’t afford to buy adequate supplies of food was started in 2007 and has grown into a nonprofit association comprised of over 50 business and community leaders.

The draconian measures imposed by state government and public education officials in response to the infectious disease have many locals staying home in isolation, referred to euphemistically as “social distancing.” Not all workers can stay in confinement at their homes.

Hahn noted that in Calvert, “some of our neediest kids are from homes where both parents are still working.”

“I had free time,” said Miyann Coleman of Huntingtown, a sixth-grader at Plum Point Middle School. “I had a friend who couldn’t buy lunch meals at school.”

Coleman was part of the assembly line of volunteers placing items such as shelf-stable milk, bottled water and canned beef stew in the distribution bags.

“I’m here because I want to help people,” said Dilana Winter of Lusby, a seventh-grader at Southern Middle School, who added she has previously resided and volunteered in other communities prior to her family’s move to Calvert. “During this time, people don’t have food and this is a good way to help. Anyone who needs food can get help.”

Prince Frederick resident Antoine White admitted in the challenging economic times that the coronavirus has presented for him and his colleagues in the mortgage and finance business, it might be easier to spend the day working harder to turn things around.

Instead, White was among the adult volunteers preparing stored, nonperishable food for delivery and distribution.

“I think this is more important,” said White. “It’s important to give back.”

“We’re behind the scenes,” said Hahn, adding that volunteers referred to the organization by United Way and Calvert County Public Schools were working to get the food to the children from low-income homes.

“Otherwise, these kids would be hungry,” Hahn said. “I think they [volunteers] are doing 3,000 meals today.”

The pastor also affirmed that the problems caused by the recent panic buying in retail grocery stores aren’t due to a dwindling supply of food.

“The stores are dealing with a problem of food availability, not a food shortage,” said Hahn.

End Hunger in Calvert, Hahn said, is getting steady aid and food supplies from the Maryland Food Bank. “We need it long-term,” he said. “This is going to be longer than two weeks.”

Hahn said End Hunger could always use more volunteers, although on Tuesday, he admitted, “at one point we had too many volunteers.” Facing school closings that could exceed the original two-week timeline, Hahn said in the long run, more volunteer help will be essential.

Monetary contributions are also needed. “All of our money goes straight to food,” said Hahn, adding that “we are circumventing the stores.”

For more information on End Hunger in Calvert County, go to endhungercalvert.org