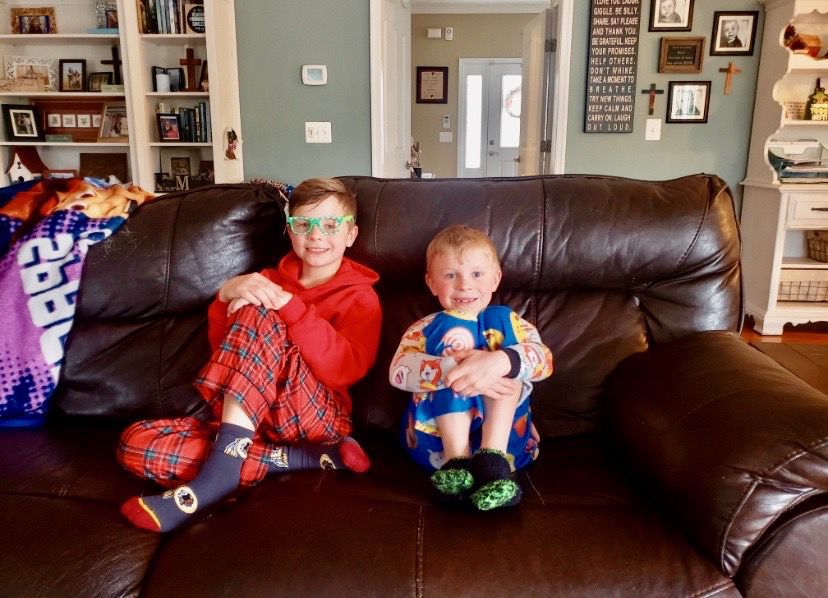 Evan Sutor, left, a fourth grader at Hollywood, and second grader Alex Sutor curl up on the couch while sporting their sleep-ware for the virtual spirit week’s pajama day. 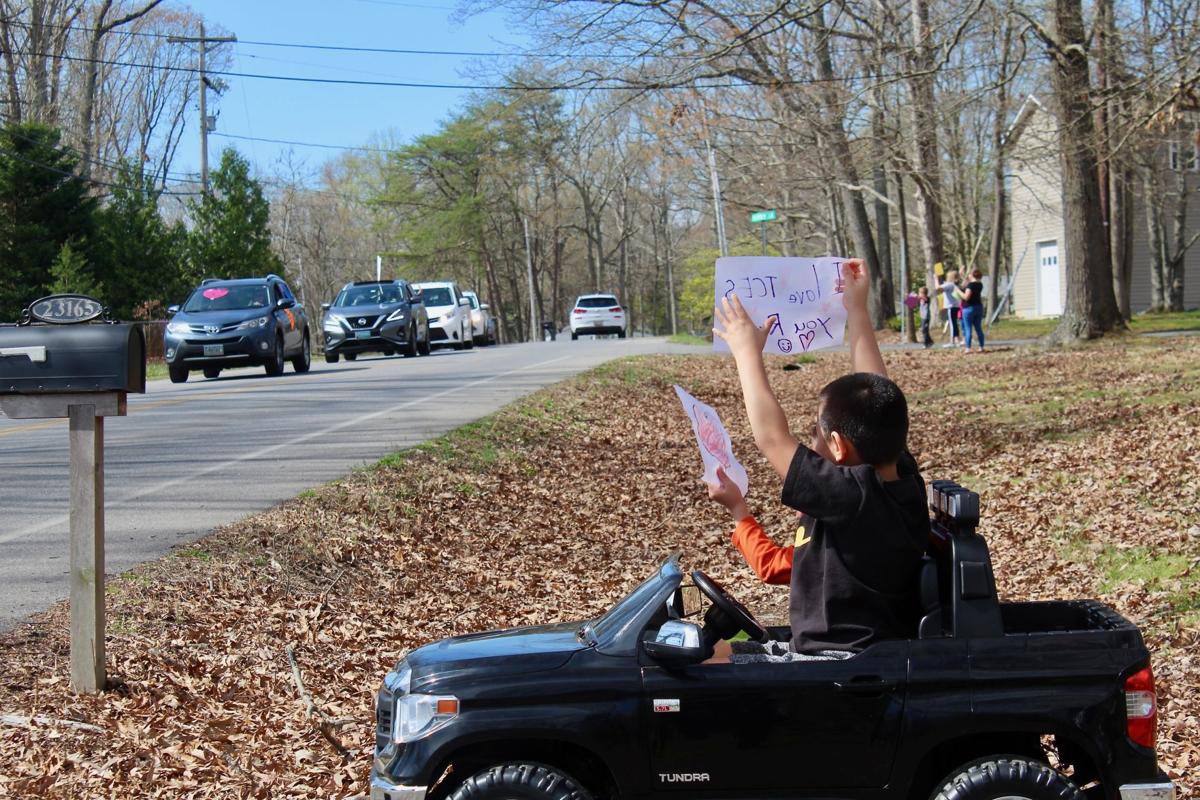 Curt Altig, 6, a student at Town Creek Elementary School holds a sign that says, “I love TCES, you rock,” along with his five-year-old brother, Trevor Altig, while a parade of Town Creek teachers travels down the road on Friday, March 27. 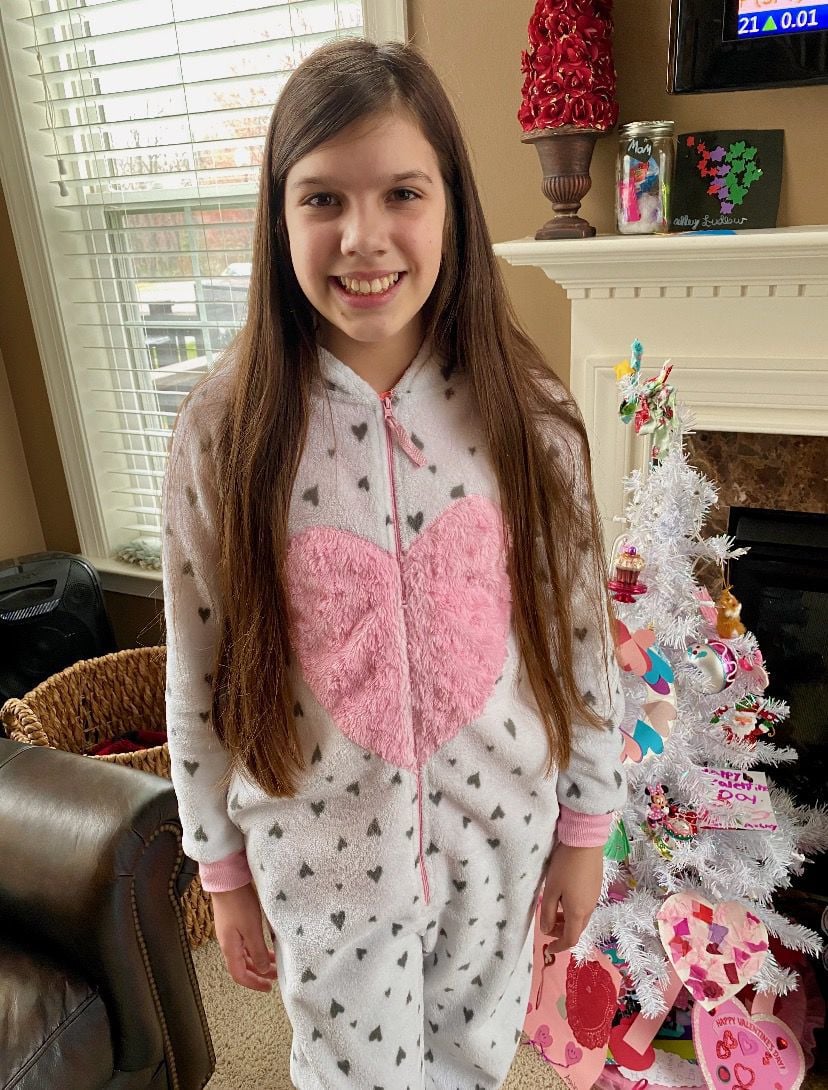 Ashley Ludlow, a fifth-grader at Hollywood Elementary, poses in her onesie for the virtual spirit week’s pajama day. 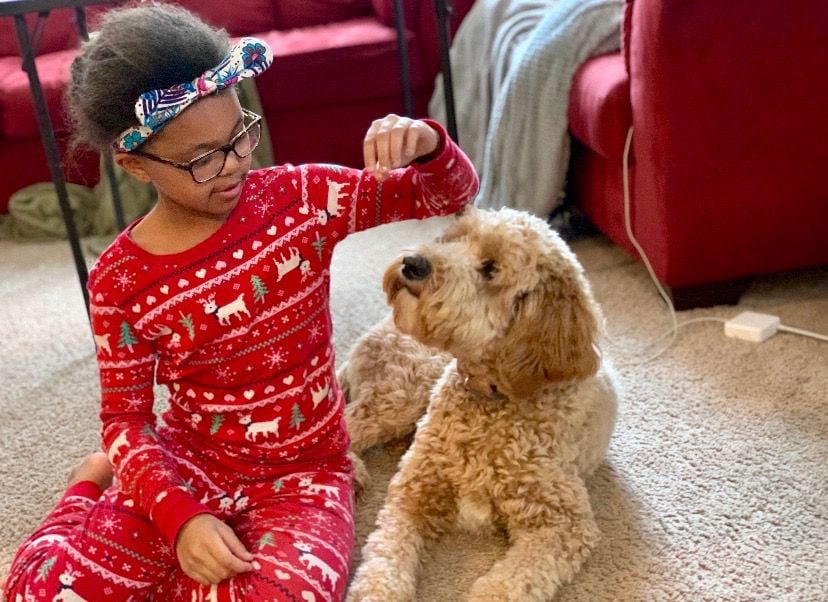 Arissa Foster, a third-grader at Hollywood Elementary, shows off her PJs for virtual spirit week while playing with her dog.

Evan Sutor, left, a fourth grader at Hollywood, and second grader Alex Sutor curl up on the couch while sporting their sleep-ware for the virtual spirit week’s pajama day.

Curt Altig, 6, a student at Town Creek Elementary School holds a sign that says, “I love TCES, you rock,” along with his five-year-old brother, Trevor Altig, while a parade of Town Creek teachers travels down the road on Friday, March 27.

Ashley Ludlow, a fifth-grader at Hollywood Elementary, poses in her onesie for the virtual spirit week’s pajama day.

Arissa Foster, a third-grader at Hollywood Elementary, shows off her PJs for virtual spirit week while playing with her dog.

A few kids and parents lined the streets of Town Creek Drive, at a safe distance, last Friday for a parade.

Teachers and staff of Town Creek Elementary School drove through the neighborhood on March 27 with decorated cars and signs like “TCES rocks” and “We love you” as they waved to the students they could no longer see in the classroom after the novel coronavirus caused schools to close. It’s one of the ways St. Mary’s educators were able to entertain students while practicing social distancing.

Six-year-old Curt Altig was sitting in a mini Toyota Tundra with his 5-year-old brother, Trevor, waiting to see his school’s parade ride by. His mom, Rachelle Altig, said her sons’ days have been kept busy while playing ABC Mouse, flash cards, practicing spelling and watching TV.

“They terrorize the living room, they help with chores,” she said, adding they practice math with a regular deck of cards.

Curt Altig said they also play outside before his mom said they sing loud while she is watching the news.

“We also plant a lot of vegetables and I think they’re doing really well growing,” the 6-year-old said. “The only thing fun for me is playing with dinosaurs.”

Some schools have taken to social media as a way of interacting with students. White Marsh Elementary posted pictures of students on Twitter showing “bear pride” while wearing White Marsh shirts. Administrators posted pictures of themselves in sports jerseys for “jersey day” and the Chopticon High School chorus Twitter account tweeted a video of students singing “I Want It That Way” a cappella from their separate homes.

Hollywood Elementary started a “virtual spirit week” between March 23 and 27 that included parents posting pictures of students wearing pajamas on Monday, for example. Other spirit days included creation day, drop everything and read, outside day and fort Friday.

Jennifer Cord, a fifth grade teacher and the county’s teacher of the year, said she, her principal, media specialist and PTA president met through Zoom to find spirit days most families could participate in.

“Many of the families participated and it, as a parent, it gave us something to do with our children each day to pass the time during these unusual circumstances,” she said through a message. “It was truly exciting to scroll through and see the pictures that parents posted.”

The closures of schools have extended to at least April 24 and St. Mary’s public schools are setting up for at-home learning. Programs like Edgenuity had lessons available for the public on Wednesday. However, teachers will not officially start instructing until April 14.

At last week’s school board meeting, Superintendent Scott Smith said 9,000 laptops with Windows 10 could be handed out to kids who do not have their own devices to access the online programs. They are also looking to utilize Atlantic Broadband’s Channel 96 and creating printed packets for every grade level.

“Certainly, in a perfect world, everyone would have every resource available at their fingertips,” Jennifer Gilman, principal of Hollywood Elementary said. “So right now we have really taken advantage of the short term resources available.”

Gilman said Hollywood’s media specialist, Stacey Hazuda, posts her ideas for home activities on her Twitter, @HES_Media_SMCPS. One of her latest posts said the first Wednesday in April is National Walking Day and encouraged students to take a walk while maintaining social distancing. For National Crayon Day on March 31, Hazuda encouraged everyone to share their colorful creations. She made a similar request for National Scribble Day on March 27.

“I am missing my Hollywood hugs,” Gilman said.

The school’s principal said she tries to send out “uplifting and encouraging things to make everyone feel hopeful.”

One example is an article titled “Six reasons you’re lucky to be married to a teacher right now.” She said she also shared a news article about how to prioritize what matters, is planning to make phone calls to more than 500 students on their birthdays and she added the school is planning its own neighborhood parade.

Gilman said that teachers are reaching out to students to say they are thinking of them. She encourages others to not completely isolate themselves and, in the meantime, they will continue to come up wit creative and amazing ideas.