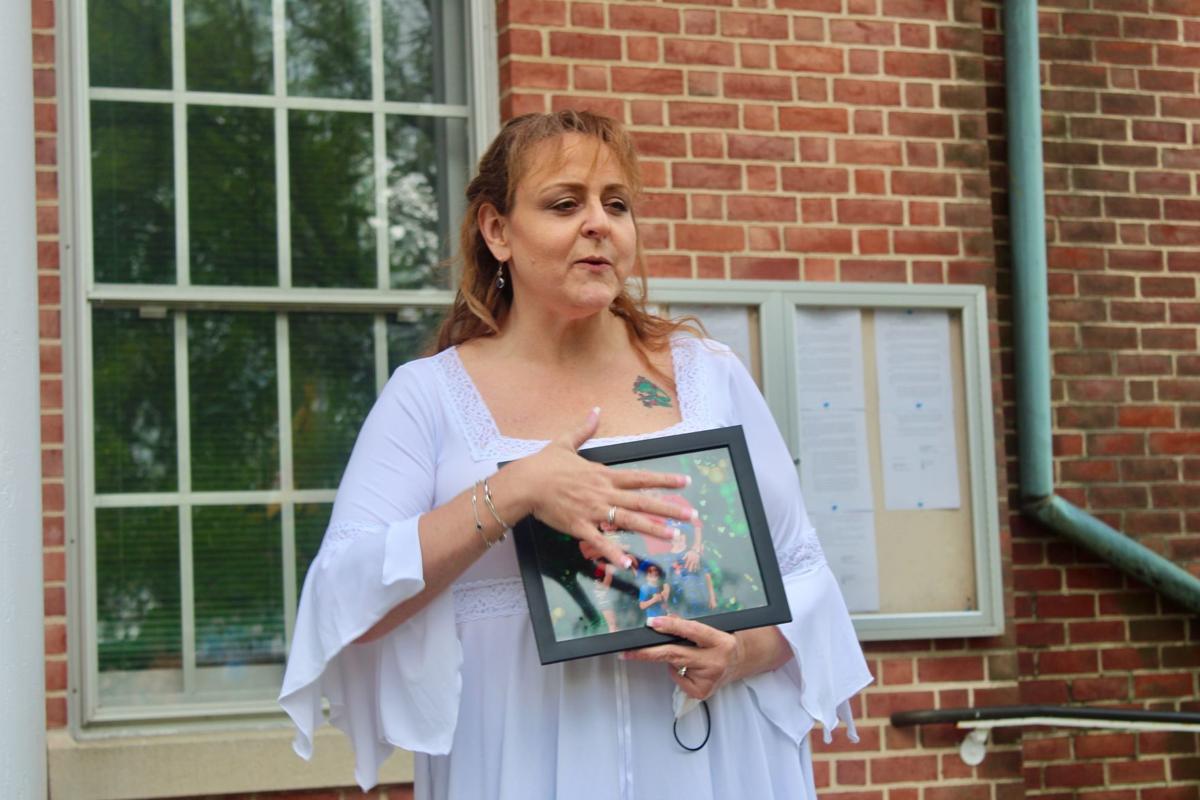 Nancy Adkins shows a framed photo of Adam, her son who is currently working as a nurse in Pittsburgh, and his family shortly before her wedding ceremony. They could not attend her courthouse wedding due to the coronavirus pandemic. 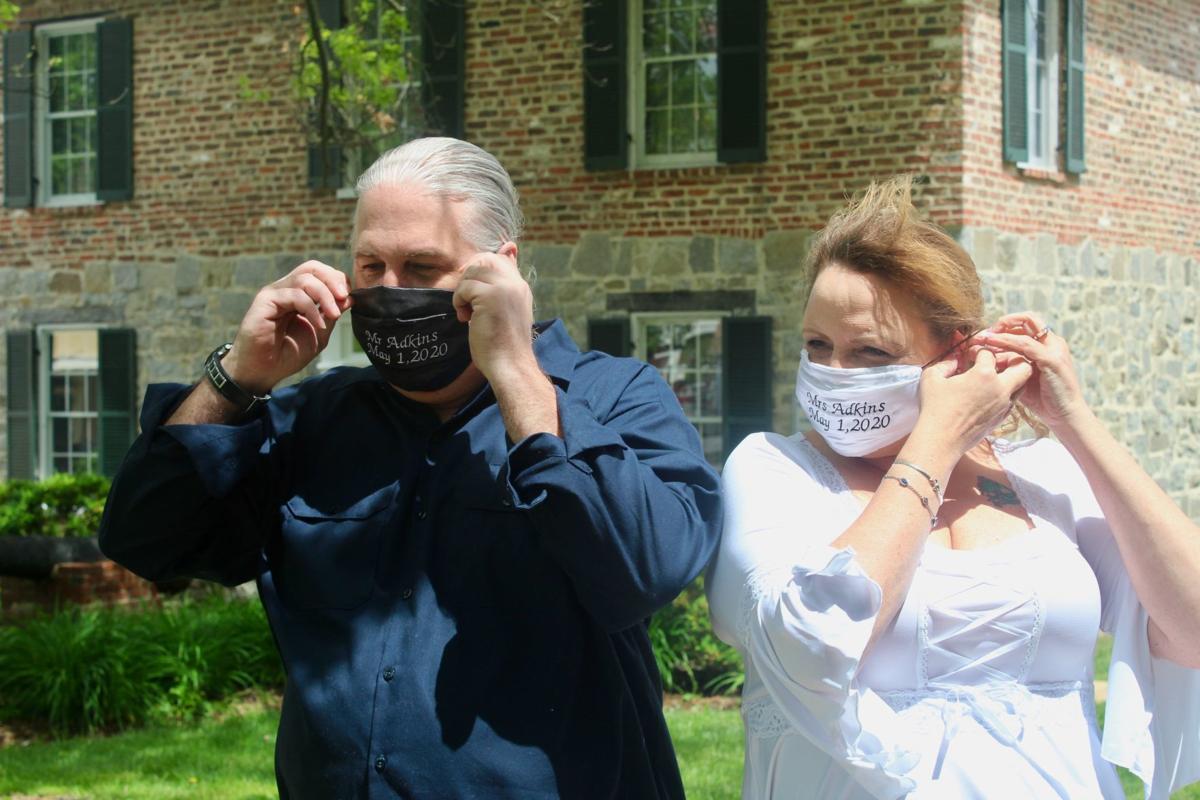 Jerry, 54, left, and Nancy Adkins, 52, put on their custom-made bride and groom masks before their Friday ceremony at the St. Mary’s circuit courthouse.

Nancy Adkins shows a framed photo of Adam, her son who is currently working as a nurse in Pittsburgh, and his family shortly before her wedding ceremony. They could not attend her courthouse wedding due to the coronavirus pandemic.

Jerry, 54, left, and Nancy Adkins, 52, put on their custom-made bride and groom masks before their Friday ceremony at the St. Mary’s circuit courthouse.

A Lexington Park couple’s wedding plans were expedited after their late March engagement due to the coronavirus pandemic, leading them last Friday to a civil ceremony outside the courthouse in Leonardtown.

Jerry and Nancy Adkins took their vows outside the front doors of the St. Mary’s circuit courthouse with a few family members standing a safe distance away, tying the knot on a nine-year relationship.

The couple, who got engaged on March 23, had initially been planning a traditional wedding, but that changed its course when Nancy Adkins (previously Long) received a letter that her employer, the William W. Winpisinger Education and Technology Center in Hollywood, had canceled all classes for the rest of the year due to COVID-19, causing her to lose her insurance benefits.

Nancy Adkins had been diagnosed with stage 3 cancer in 2013, and still suffers from underlying health issues following her treatment.

The newly engaged couple in mid-April reached out to the courthouse, which has only been considering emergent weddings on a case-by-case basis, and were able to schedule the wedding for May 1.

The level of emergency to perform a marriage ceremony at the courthouse, or just to receive a marriage license from the clerk’s office amid its closure due to COVID-19, is decided on a case-by-case basis by the court’s administrative judge, Michael J. Stamm.

“Because it’s for emergencies only, they would need to contact me via administrative email with their information, and the county administrative judge [Stamm] would approve emergency cases only,” Clerk of the Circuit Court Debra Burch (R) said.

For Nancy Adkins, the emergency was a combination of issues regarding her health after cancer.

“It’s not just insurance, it was insurance and major past health issues,” she said.

Growing up in Charles County, the newlyweds had gone to Maurice J. McDonough High School in Pomfret together for three years in the 1980s, but “in the three years in that building, we didn’t say a word to each other,” Nancy Adkins said.

“He was the popular art guy, with the parachute pants and studded bracelets, and I was playing clarinet in the marching band,” she added.

The two went on separate paths, but have since found out they have run into each other unknowingly through the years.

“I was working at one place that [Jerry] went to often,” Nancy Adkins said. “He was passing by my desk and didn’t even know it.”

In 2011, with the grace of social media, the couple met each other through mutual comments. She was living in Georgia at the time, and came for a visit to Charles County where Jerry Adkins drove her around, before starting to date shortly after and moving in together later on, getting engaged two months ago.

“Distance, time, whatever, nothing was going to stop us from being the couple we wanted to be, and the couple we are,” Nancy Adkins said. “This was just one more rock we needed to climb over.”

The couple has seen “all angles” of the virus, with a son, Tyler, being laid off indefinitely due to COVID-19, a daughter, Darlene, working in customer service and another son, Adam, on the front lines as a registered nurse in Pittsburgh.

“He’s putting himself out there every day,” Nancy Adkins said, having brought a framed photo of Adam’s family to the wedding so everyone could be there.

The afternoon wedding proceedings were streamed on Facebook Live, and Nancy Adkins estimates around 600 friends and family from around the world were able to tune in.

“When this all clears, and the air is safe, which is probably next year, we’re going to have one heck of party,” Nancy Adkins said.