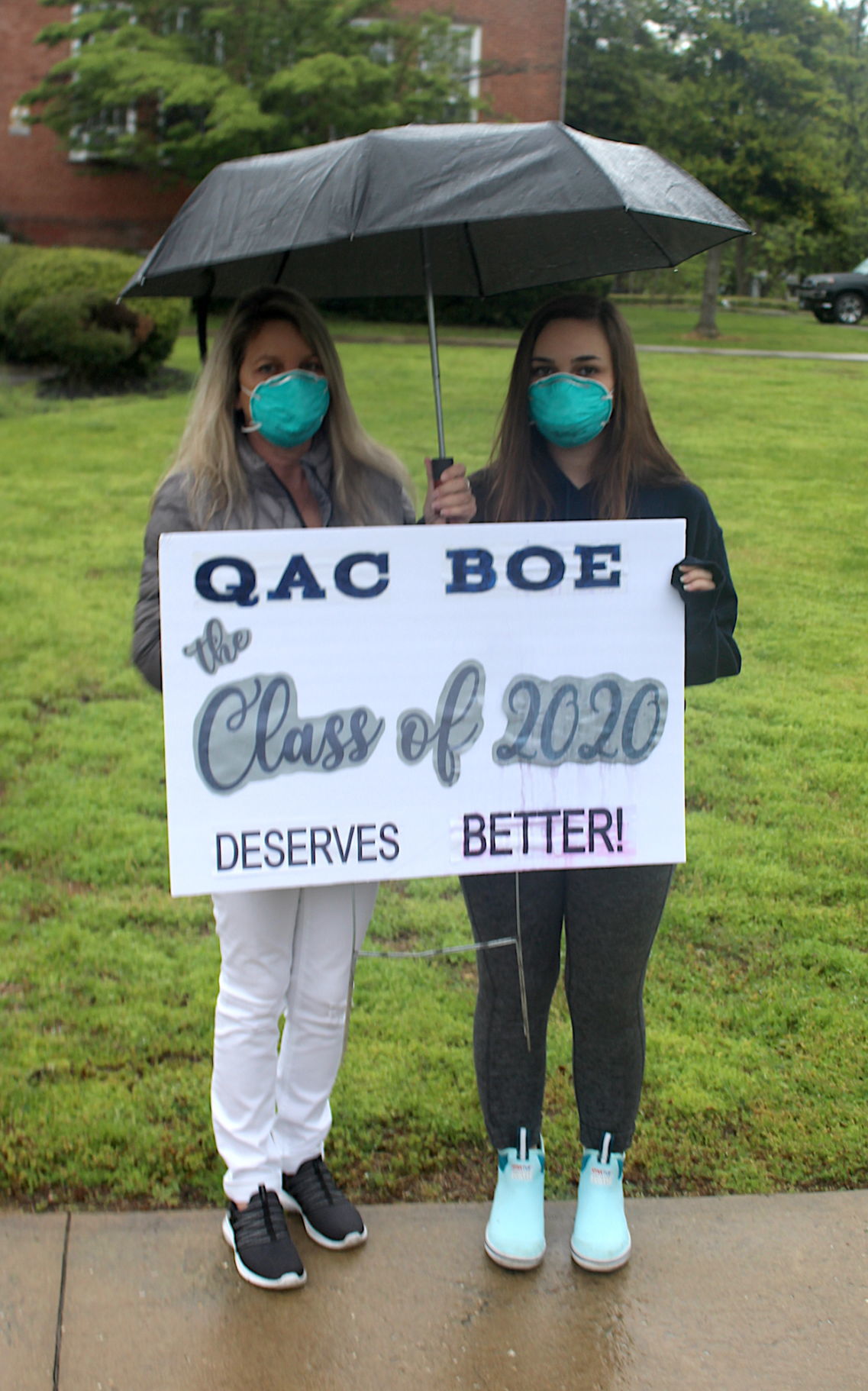 This mother and daughter from Kent Island High School had a simple message for the Board of Education about the Class of 2020 planned virtual graduation, Wednesday evening, May 6, outside the Board headquarters in Centreville. 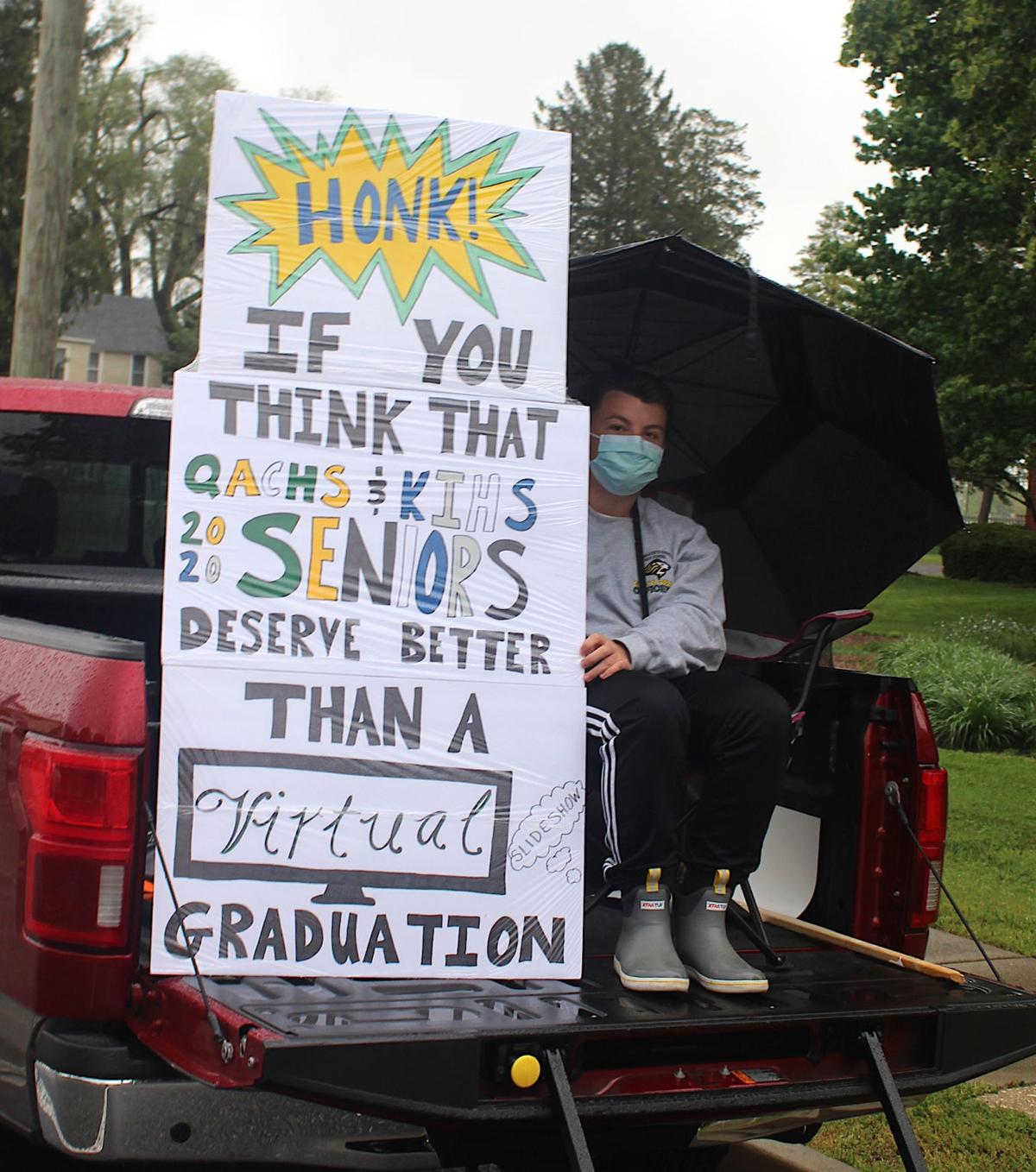 This mother and daughter from Kent Island High School had a simple message for the Board of Education about the Class of 2020 planned virtual graduation, Wednesday evening, May 6, outside the Board headquarters in Centreville.

They wanted the school board, which was meeting, to intervene in the plans announced May 1 by Principals John Schrecongost and Amy Hudock to play a video of speeches and yearbook photos accompanied by a list of accolades and achievements on May 28 with no opportunity for graduates to wear their gowns or cross a stage to receive their diplomas or have any sort of in-person recognition. Numerous parents were quick to respond, sending letters of disapproval to the school board.

School Board President Tammy Harper said, “We have not taken the principals decision to have this ceremony lightly. It’s been a very difficult decision, but people’s safety is behind the decision that has been made.”

Just over two hours of the nearly five-hour school board session Wednesday was devoted exclusively to discussing the graduation issue.

Shannon wrote, “Please reconsider the virtual graduation decision. There are other options that can be done safely.” She listed several alternative ceremonies that are being used from around the nation, including a “drive-thru graduation” and walk through for students where parents would not attend. “Postpone the ceremony even for an indefinite time” is better than doing the virtual right now, she said.

Skylar said, “My heart is aching and I’m confused. Advocating for my classmates has become a full-time job in the past month. What’s been decided makes me feel like our seniors are an after thought.” She also listed alternative graduation ceremonies that are planned in neighboring Talbot and Caroline counties, asking why Queen Anne’s couldn’t do the same? “If one of the graduates were your child,” she asked, “would you not want better for them?”

Board member Captain Beverly Kelley said, “I struggled with this decision, and purposely looked for alternatives to support the seniors requests, however, the last issue that stopped me was the ‘essential travel ban’ to comply with the governor’s continuing directive. To have the seniors come to a location to participate in an alternative ceremony, walking across a stage to be videoed, would break that governor’s instructions. We must obey the directive as it now stands. The state superintendent made that clear in her statement when she announced schools would be closed for the remainder of the school year.”

Kelley said she was in favor of delaying graduation to see if a later opportunity may arise to allow the seniors have a more special ceremony.

Superintendent Dr. Andrea Kane was asked about how the cap and gown pick ups were arranged and why that was OK, but something like a graduation parade was not. Someone, supposedly in law enforcement, criticized the cap and gown pick up saying it was not “essential travel.” Kane said, “That question/issue was put out there after we had already done it. Other school systems, the week following, had not arranged for their students to pick-up their caps and gowns.”

Smith said, “The well-being of the students’ health is the bottom line — safety is paramount. Some say ‘this is the easy way out’ — I don’t agree with that. Right now, it’s the right decision, but it’s not a popular decision.”

Harper added, “The infections of the coronavirus here are going to go up.”

She mentioned receiving contacts from a few parents who told her they approved of the decision to hold graduation as outlined in the principals letter, as their family members could not attend any live graduation ceremony because they had compromised health conditions. However, of the letters received and read, none were in support of the decision for the virtual ceremony.

The board went on to other scheduled business then returned to the graduation issue again, reading aloud all but two of 66 letters, the majority from adults, and 21 from students, sent to the board. The two that were not read were reportedly dominated with profanity and demeaning remarks.

The following words/expressions were repeated many times within the letters that were read: “Delaying graduation should be the first consideration,” “totally onboard with social distancing, but not the decision for a virtual graduation as it’s been presented,” “glorified slideshow,” “intelligent and creative suggestions swept aside,” “you’ve given up on us,” “took easy way out,” “why not think outside the box,” “look at what other school systems are doing,” “heartbreaking, heartless decision,” “COVID-19 happened — see you later,” “just go away.”

Before the meeting concluded, Kelley asked Kane, “We’re going to be looking at an alternative when things might open up?”

“Absolutely,” Kane responded. “Our principals are already looking at what graduation may look like when restrictions are lifted.”

Kelley then asked, “That means we’re considering a delay for graduation?” Kane again responded, “A delay for certain, as the government restrictions won’t be lifted before June.”

“In compliance with the governor’s executive order, QACPS will limit the number of people in the building to no more than 10 including the graduate, family members and school leaders,” Kane wrote.

The governor issued guidance on graduation ceremonies to Maryland State Police on May 7, “When a local superintendent approves a graduation plan for a school district which they oversee, law enforcement may not take action against individuals for leaving their homes for the purpose of attending approved graduations and returning to their home following the end of the event.”

Kane’s email said details pertaining to the commencement ceremonies would be coming soon.

“This direction from Governor Hogan about what we can do with graduations is a win-win for all of us,” Harper said in a phone interview Monday.

Schrecongost emailed students later Monday saying they had been approved to expand plans for commencement, “I wish you could see the smile on my face as I type this note.”

He continued, “In addition to our Virtual Ceremony, during the first two weeks of June, all of you will have the opportunity to arrive at KIHS wearing your cap and gown and join me and one other administrator within our gym. You will have several photo opportunities, you will hear your name announced, and walk our graduation stage in front of 5 family members and a professional photographer!”

He added the plan would continue to be refined and participation is voluntary.

The virtual graduation ceremony May 28 will be shown on Atlantic Broadband channel 7 and can be accessed online via the QACTV website.