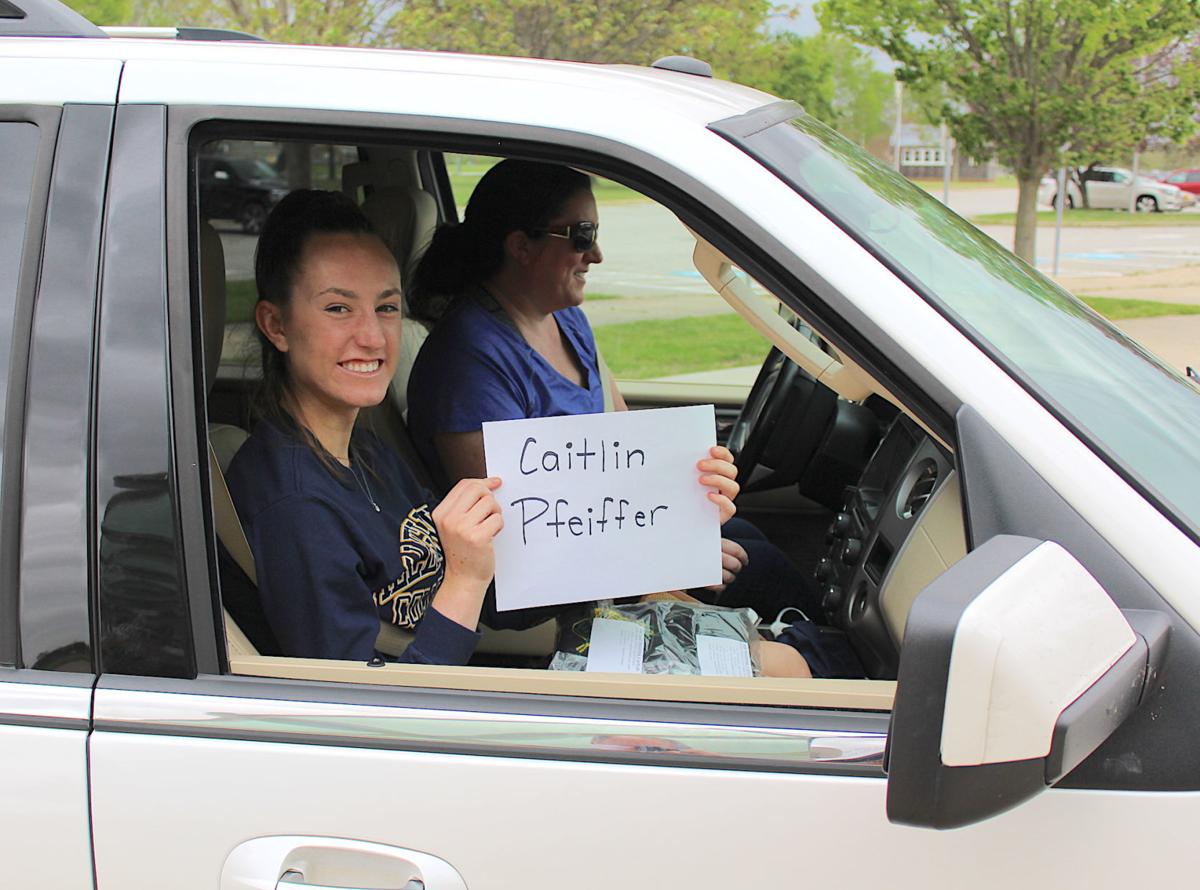 Queen Anne’s County High School senior Caitlin Pfeiffer was able to pick up her cap and gown Thursday afternoon, April 30, during a drive-through arrangement in front of the high school. 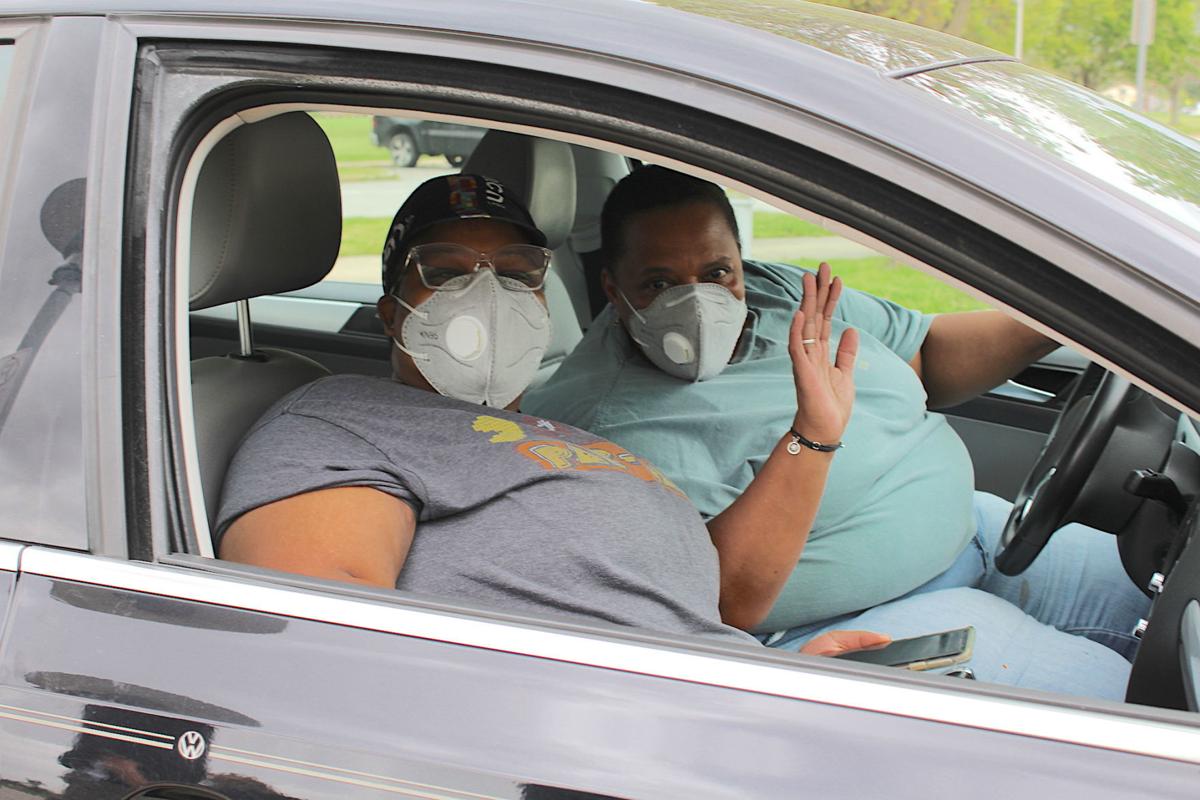 Family members of Queen Anne’s County High School senior Zoe Langdon-Kennedy excitedly pick up her cap and gown in front the high school Thursday afternoon, April 30, during a drive-thru arrangement. No one had to get out of their vehicles. 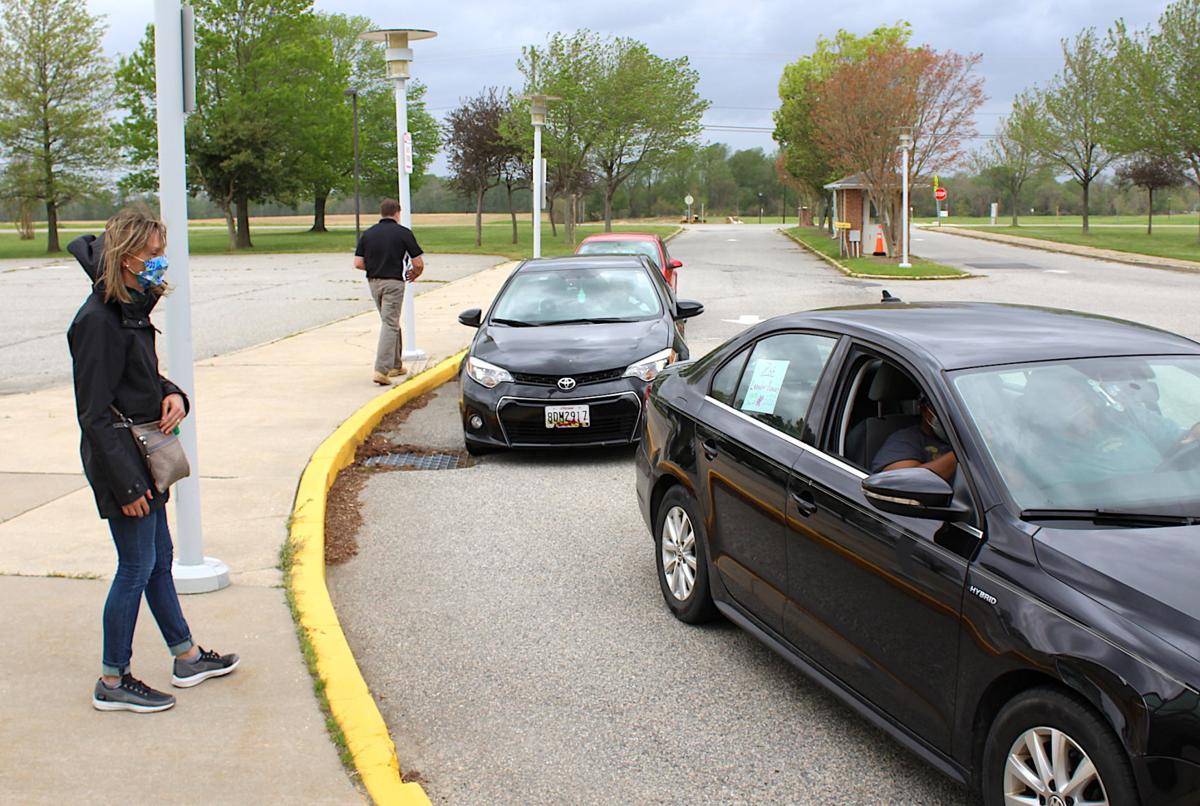 Queen Anne’s County High School senior Caitlin Pfeiffer was able to pick up her cap and gown Thursday afternoon, April 30, during a drive-through arrangement in front of the high school.

Family members of Queen Anne’s County High School senior Zoe Langdon-Kennedy excitedly pick up her cap and gown in front the high school Thursday afternoon, April 30, during a drive-thru arrangement. No one had to get out of their vehicles.

STEVENSVILLE — Parents of graduating seniors from both Kent Island High School and Queen Anne’s County High School expressed their disappointment in the emailed letter they received Friday, May 1, from the schools’ principals, KIHS Principal John Schrecongost and QACHS Amy Hudock sent a letter out regarding identical plans for virtual graduation ceremonies at both schools.

Queen Anne’s County Superintendent of Schools Dr. Andrea Kane discussed suggestions for alternative graduation ceremonies at the April 22 school board meeting, but said no decisions had been made. That no final decisions had been made was mentioned again during the county commission meeting Tuesday, April 28, where Kane and School Board Vice President Dick Smith were present to talk about next year’s school budget.

However, student school board member Skylar Podraza of Stevensville, who is also 2020 class president at Kent Island High School said in a phone interview Monday, May 4, “We had an online meeting with our SGA advisors Tuesday, April 21, before the Board meeting that evening. Our advisors told us what had been decided as how graduation would be held virtually, the same as described in the letter we received May 1. I told the group I would speak with Mr. Schrecongost to see if any other alternatives could be considered.”

Skylar created a PowerPoint presentation and emailed it to Schrecongost, which she discussed with him over the phone Monday, April 25. All of the recommendations took into account social distancing procedures.

She said he promised her that he would share the recommendations with Kane and get back to her. Skylar said, “I never heard back from Mr. Schrecongost. No one called.”

She added, “The emailed letter we received Friday, May 1, made me feel they took the easy way out for our graduation. I don’t think that’s what we deserve.”

Seniors picked up their caps and gowns for commencement on Tuesday, April 28, at Kent Island High School and Thursday, April 30, at Queen Anne’s County High School via a drive-thru, which required no one to get out of their cars. The emailed letter arrived Friday morning.

QACHS parent Susan Sweitzer of Centreville, whose daughter, Casey is among the graduating seniors, said, “The timing of the letter was horrible. If the kids aren’t going to be able to use the caps and gowns for graduation, why were they handed out?”

None of the parents interviewed are suggesting having a “normal graduation.” They all agreed “normal” is not currently possible and won’t be for some time. However, they were looking to recognize the graduates with something uniquely different to make the graduates’ achievements memorable.

Some of the parents described using the senior yearbook graduation pictures as the principals stated as a “slide-show” and found nothing special about it.

Among parents who had sent in recommendations to the April 21 board meeting, Sweitzer had suggested a parade of cars carrying graduates with their parents along the homecoming parade routes at each school.

“People could have lined the sidewalks, practicing social distancing, while waving to the graduates during the parade,” she said. “No one ever told us why that idea was not approved or rejected.”

Sweitzer added, “One thing I’ve learned about people in Queen Anne’s County, if there’s a problem, the people here will come together to make a solution happen to correct it. The people in this county have demonstrated over and over that they care. As parents, tell us what to do to help make our children’s graduation ceremony special and keep everyone safe, and we’ll make it happen!”

KIHS parent Biana Arentz of Prospect Bay, whose son is a graduating senior, said, “I am very disappointed with the letter we received. This is really upsetting. This letter was wrong. There are other options. We don’t have to have graduation the end of May. We could wait until later in the summer.” Arentz also said handing out the caps and gowns was for nothing.

Queen Anne’s County School Board President Tammy Harper said, “These are very difficult times — scary. I want everyone to know the board has not participated in the decision about how graduation will take place. That is a decision traditionally made by each principal. We have to err of the side of caution. This decision is not easy at all. We must obey the law in protecting lives until it is deemed safe for us to resume some degree of normalcy. Losing one life to this virus because of how we might do graduation is too high a price.”

The next school board meeting is scheduled for Wednesday, May 6, beginning at 6 p.m.

Harper said, “I will share all the emailed recommendations from parents and students that I have received during that meeting about graduation. I would recommend considering postponing graduation if there is anyway we can do something better to recognize our graduating seniors, however, safety is what we must consider first and foremost.”

She added, “People have come together privately in the communities to have individual signs made for all of our county senior graduates to place in their yards.”

Harper said that as a mother of two past county school students, she knows how important high school graduations are to students and parents.

School board member Mark Anderson said, “High school graduation is traditionally seen as a rite of passage, a coming of age.”

Board Vice President Richard Smith said, “May 15 is a very important date for schools in Maryland. The state superintendent will have news as to what will happen by then for the remainder of the school year. Hopefully, she’ll have good news. We’re not shutting the doors on the class of 2020. Maybe then, we can reassess what our options might be, but we’ll have to see.”

Parents have been looking at what other school systems have been planning to do, both locally and across the nation, for their graduating seniors. No school systems are doing traditional commencement ceremonies, however, many are doing their best to modify ceremonies to make them as uniquely personal as possible.

Wylie High School Principal Virdie Montgomery, of Wylie, Texas, has 612 graduating seniors at his school. He said he realized his seniors have had so much taken away from them that can’t be replaced — even a normal graduation. He decided on his own he would go visit each senior at the front door of their home. It took him 12 days, 79 hours, and he drove 800 miles to see every one of them. Wearing a face mask, he knocked on every door, presented a congratulations card to each senior, and took a selfie standing 6-feet away with each senior. He then posted all 612 selfies into a video that took 6.5 minutes to run with music.

He said, “They aren’t going to have a typical senior experience. I just wanted them to know they were cared about.”

Poplar Springs High School Principal Farcia West in Graceville, Florida, has a much smaller number of seniors at her school, just over 100. However, she had each seniors graduation pictures made into poster size and posted each one up the long driveway leading up to the school. She said, “The world needs a hug right now.”