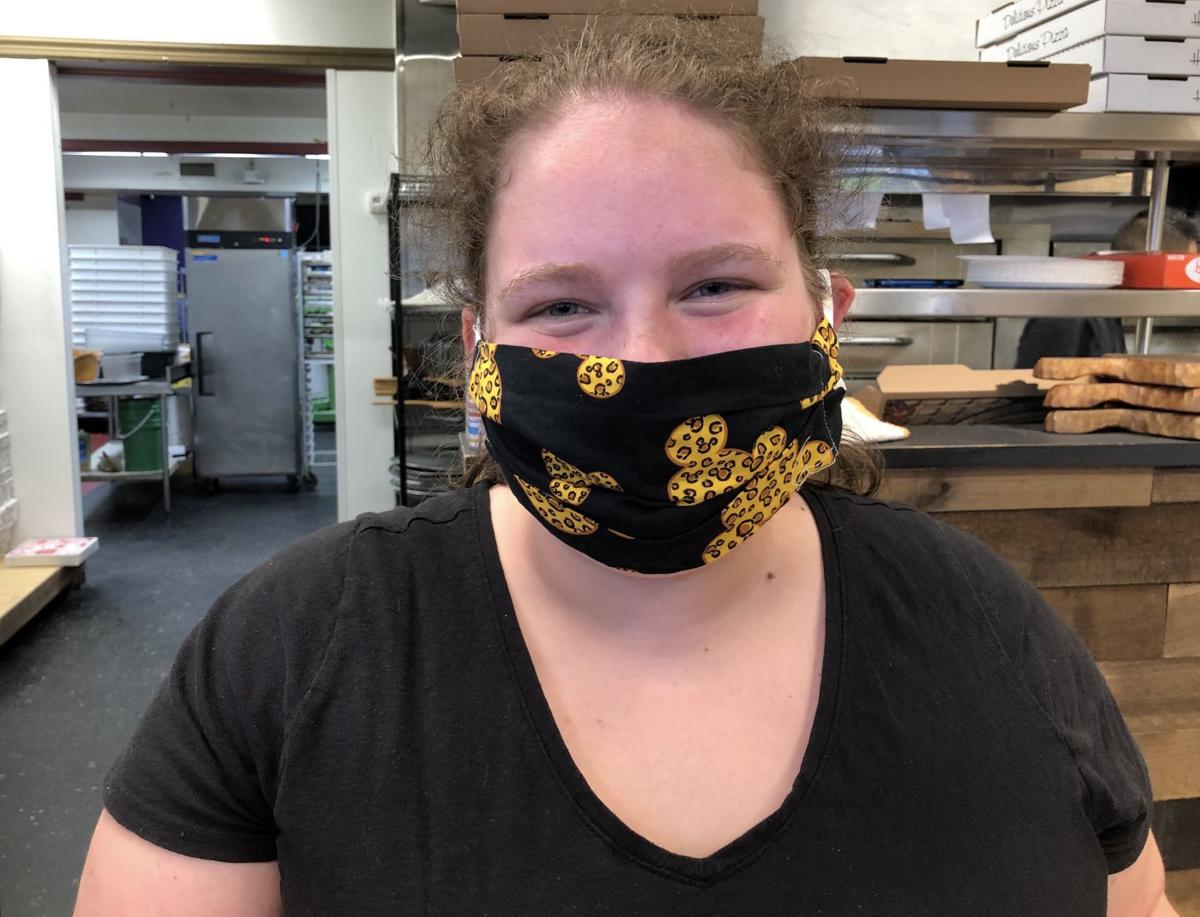 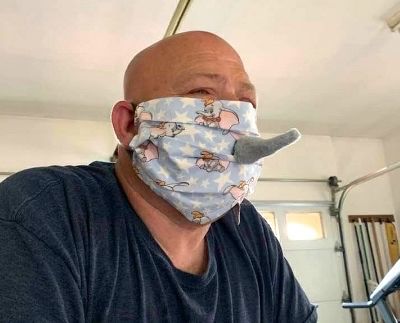 North East-area resident Earl Ward shows off his Dumbo the Elephant mask, which he wears in public to lift the spirits of people who see him. 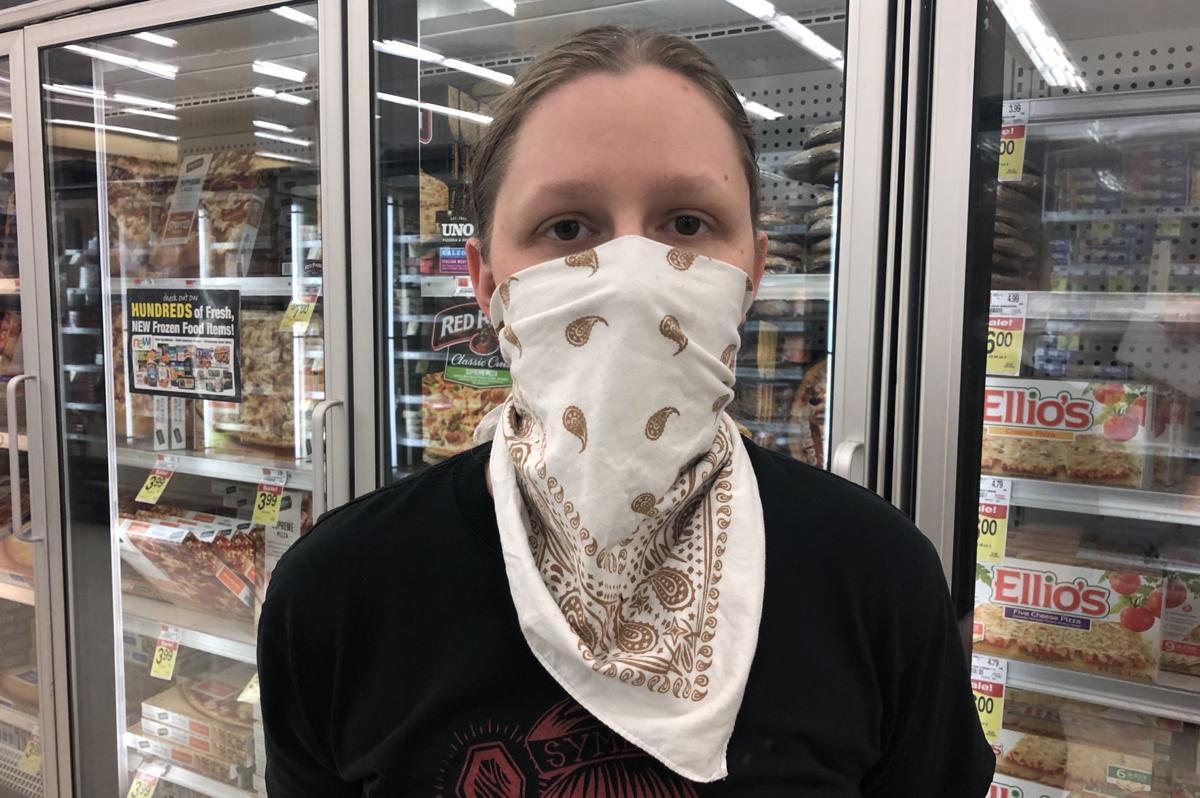 Elkton-area resident Amanda Rice is wearing a paisley-print mask fashioned from a bandana, which had "just enough color" for her tastes. 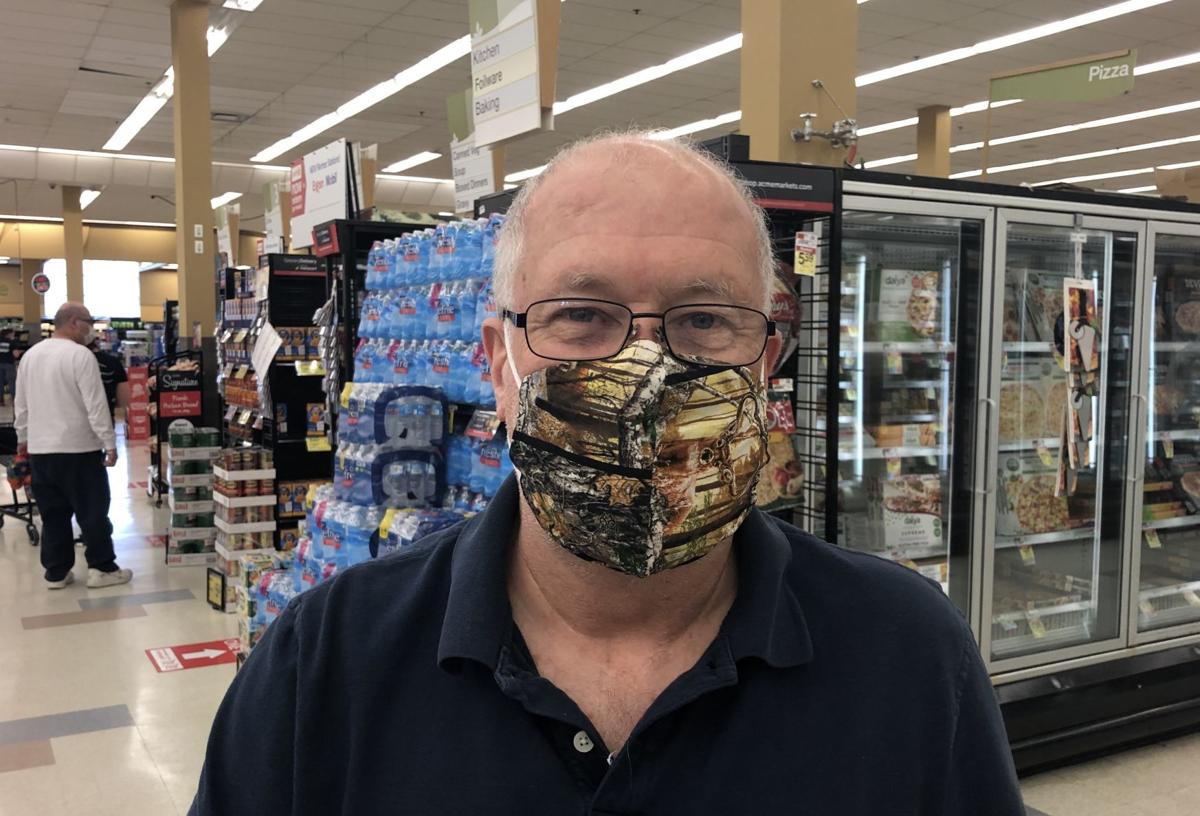 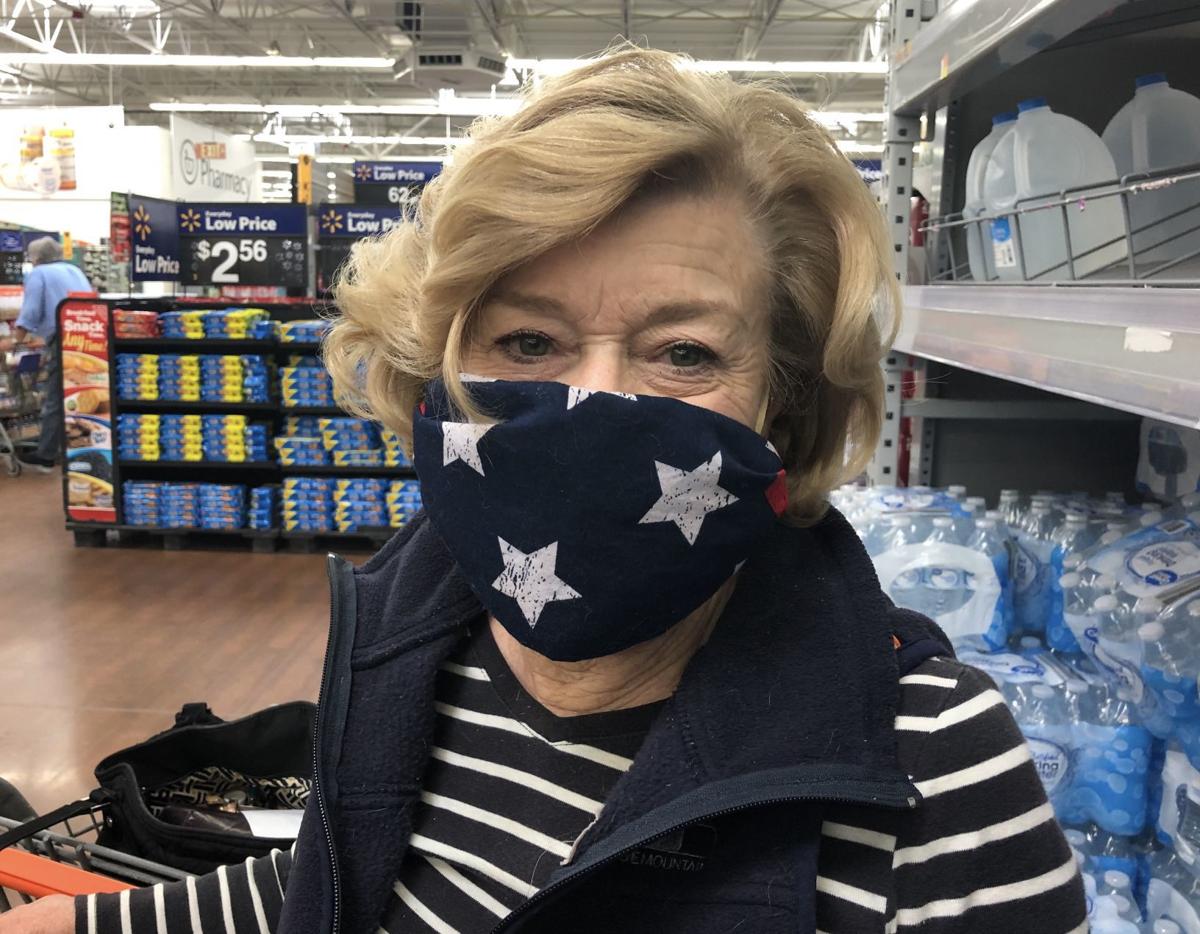 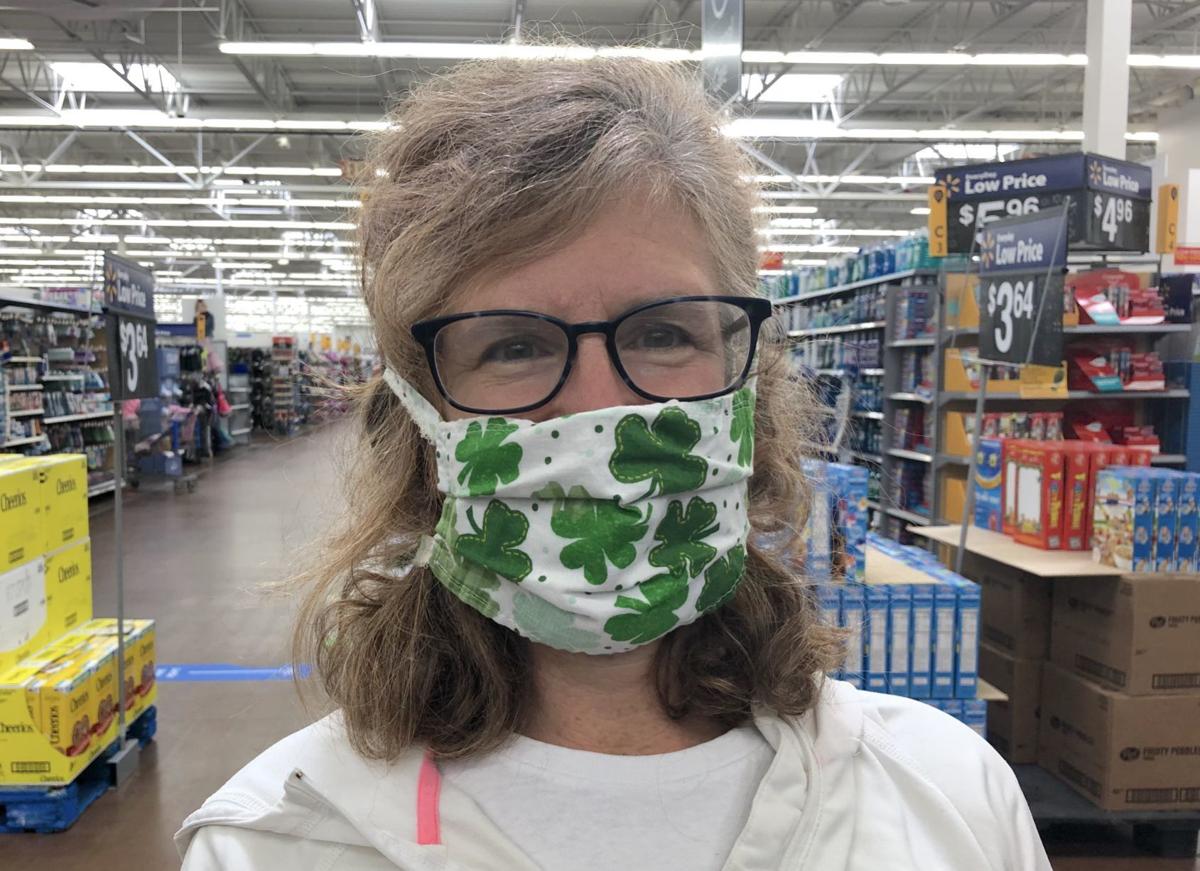 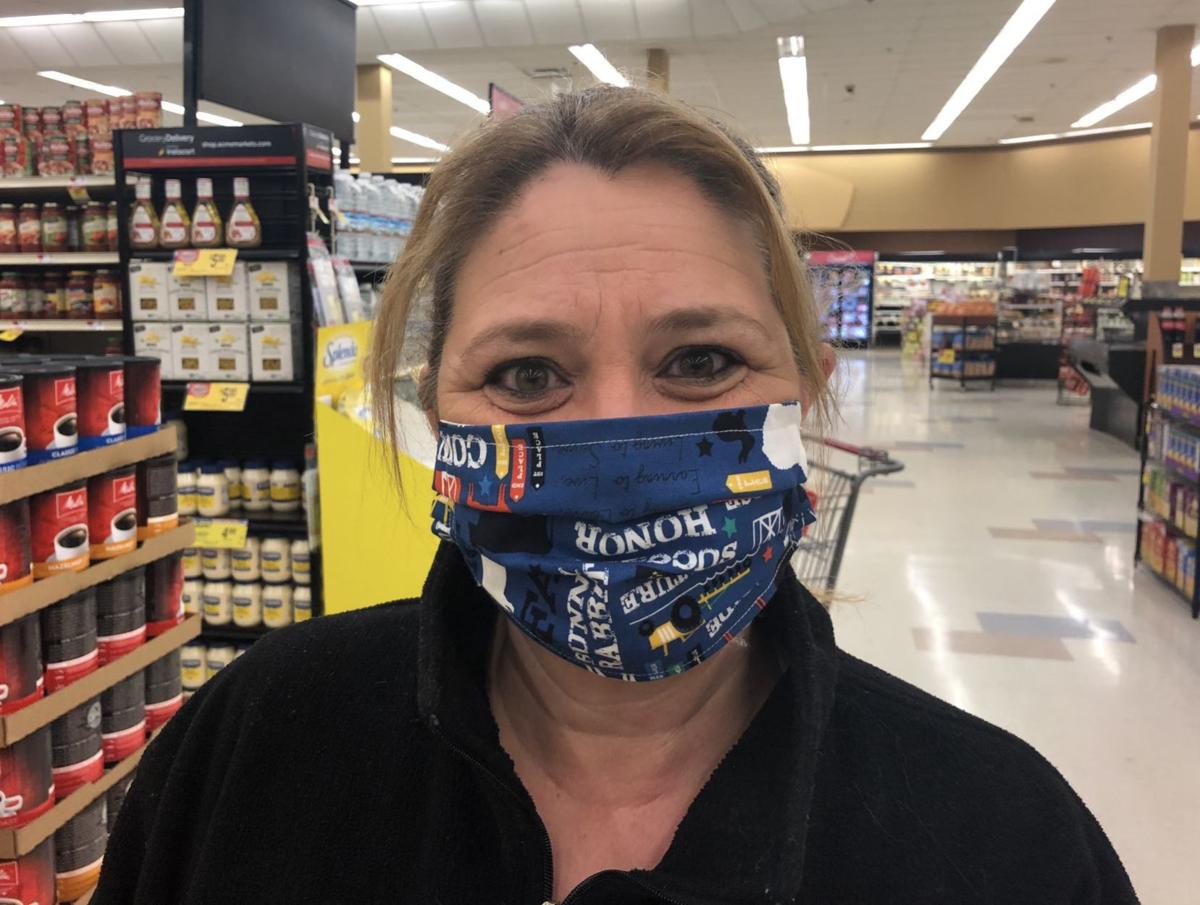 Earleville resident Deborah Thomas shows her support for U.S. farmers with this mask. 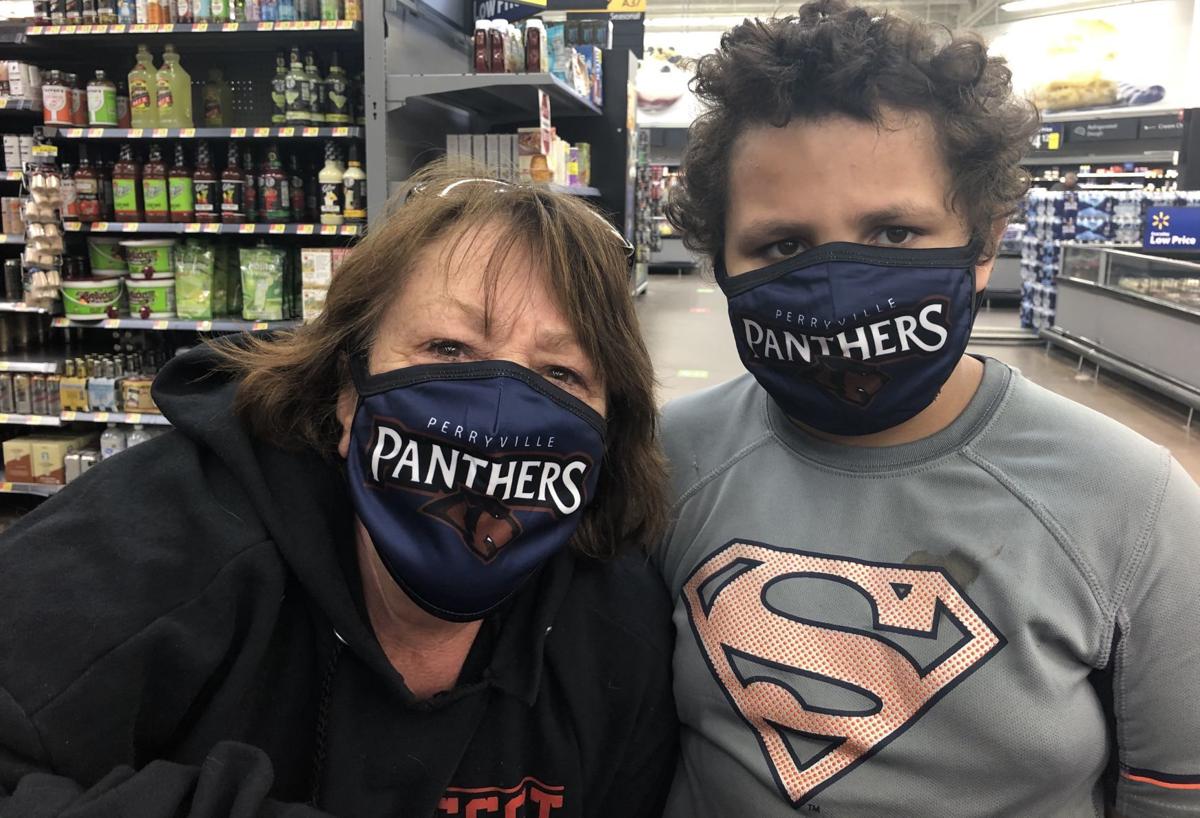 North East-area resident Earl Ward shows off his Dumbo the Elephant mask, which he wears in public to lift the spirits of people who see him.

Elkton-area resident Amanda Rice is wearing a paisley-print mask fashioned from a bandana, which had "just enough color" for her tastes.

Earleville resident Deborah Thomas shows her support for U.S. farmers with this mask.

CECIL COUNTY — Cora Hickling's mother bought a Mickey Mouse print dress at an Animal Kingdom gift shop last year, after she got drenched on a water ride at that theme park - a very funny memory from that Florida family vacation.

It was an emergency purchase, one that allowed Hickling's mom, Stormee Hickling, to be dry and comfortable for the rest of that day.

Flash forward to now: These days, a piece of that very Mickey Mouse print dress covers Hickling's mouth and nose when she is inside stores and other public places, including Bella Pizza in North East, where the 18-year-old Charlestown resident works.

After some careful cutting with scissors, fabric from the Mickey Mouse print dress has been repurposed as a protective mask for Hickling amid the coronavirus pandemic, which recently prompted Gov. Larry Hogan to issue an emergency health order requiring all Marylanders to wear face coverings in specified public places.

The homemade mask allows Hickling to adhere to the gubernatorial directive.

But it also allows Hickling to fondly recall her family's trip to Disney World, Animal Kingdom and other Florida attractions - and, more specifically, the day her soaking wet mom bought the Mickey Mouse print dress after that water ride got the best of her.

"This has some sentimental value for me," Hickling told the Cecil Whig, while working behind the Bella Pizza pick-up counter.

The black cloth mask with yellowish Mickey Mouse head shapes covered her mouth (and nose) during her impromptu Cecil Whig interview and yet, her smile was quite evident because of the sparkle in her eyes and the giggle in her voice.

Hickling explained that, although the Mickey Mouse print dress suited her mom's immediate need on that day in the Animal Kingdom, she had no problem cutting up the garment to protect against COVID-19.

"She was never going to wear it again," she said, before commenting with a laugh, "A Mickey Mouse dress is acceptable in Disney World, but not here in Maryland."

Based on recent strolls through supermarkets, liquor stores and other essential businesses in Cecil County, most people opt for bland, medical-looking face masks.

But then there are some people like Hickling, who have made or bought masks that have sentimental value, or show a flair for fashion, or represent a cause, or exude ethnic and national pride and so forth.

As for North East-area resident Earl Ward, he wears a Dumbo the Elephant print mask - complete with a grey fabric trunk that juts out - when in public places simply to lift the spirits of folks he encounters.

"I just get smiles everywhere I go. People see it and laugh," Ward said, noting that he is aware that the coronavirus pandemic has resulted in hardships and uncertainty for many people.

"A lot of people are walking around so sad these days, and that's why I wear this silly mask - just to make them smile."

Ward is employed by a regional contractor that does road work, bridge projects and such. The wife of one of his coworkers made the Dumbo the Elephant masks for him and his fellow employees. At Ward's request, the mask-maker modified his Dumbo the Elephant face covering.

"She safety-pinned Dumbo's truck (a length of gray fabric) on there for me," Ward said with a chuckle.

Elkton-area resident Amanda Rice wanted something aesthetically pleasing, but not too busy, when she was selecting materials to make a mask. She drew from six bandanas that her dad had given her, after she was unable to find a face mask.

"It is plain, but it has just enough color in it," assessed Rice, wearing a white cloth mask with splashes of golden-brown paisley designs.

Mission accomplished: Lawton was sporting a rugged-looking camouflage mask featuring a deer when the Cecil Whig recently spotted him inside the Acme grocery store in Elkton.

As for the mask worn by Charlestown resident Pam Johnson, just one look at it instantly reveals where her heart lies.

"I am a card-carrying member of the Daughters of the American Revolution," Johnson declared from behind a patriotic-looking, red-white-and-blue mask featuring stars. "My Revolutionary War ancestors lived in Charlestown. I grew up in Charlestown and I still live in Charlestown, which is proof we don't move much."

Johnson's attitude toward the mandatory mask order: "I have to do it anyway, so I might as well express my personality while I'm doing it."

The Cecil Whig talked to Johnson in the water aisle of the North East Walmart's grocery section.

A few aisles away from there was Elkton-area resident Nitsa Edmundson, who was sporting a mask featuring emerald-green four-leaf clover prints.

"I'm not Irish. But my husband, Tom, is Irish, so that's why I'm wearing this. It's fun to show off your heritage," Edmundson said, before giving her take on the gubernatorial mandatory mask order. "This definitely gives people an opportunity to show off their personality and style with the masks they wear."

Earleville resident Deborah Thomas was wearing a mask with prints of farm equipment, barns and similar pastoral images when she and the Cecil Whig crossed paths recently. Thomas purchased her mask on Amazon, knowing that some of the sale proceeds would be donated to a national farmers association.

"I support our farmers. They're having a rough time of it, especially now," said Thomas, who described herself as a recreational farmer before remarking, "You have to wear masks now, so you might as well promote what you believe."

As for Port Deposit resident Debbie Boileau and her 11-year-old grandson, Carter Boileau, they support the Perryville Panthers boys football team. That's because Chase Boileau - Boileau's other grandson and Carter's brother - plays for that team. Chase is a Perryville Middle School seventh-grader.

Their support of Chase and his team was clear from the matching Perryville Panther masks that Boileau and Carter were wearing in public recently.