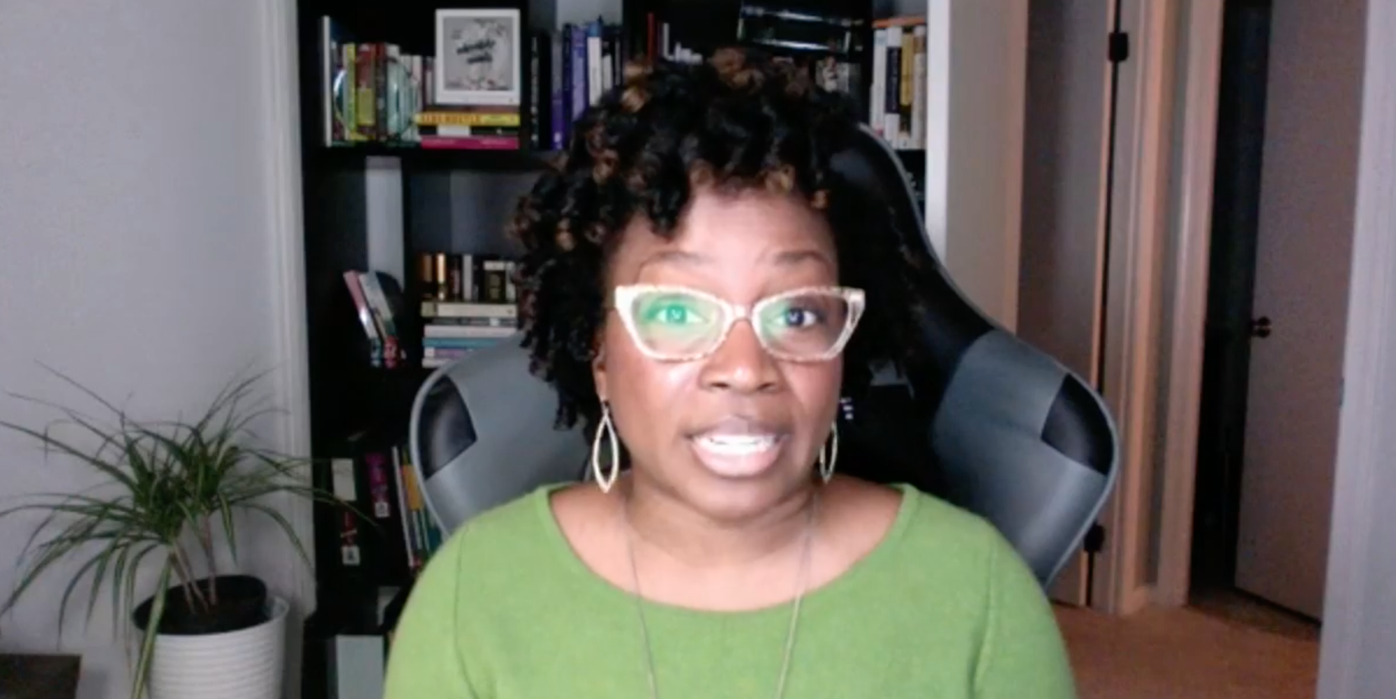 Ruth Shoge, a professor at the Salus University-Pennsylvania College of Optometry, speaks to the history behind vaccination hesitancy among the African American community during the fourth annual Henry Highland Garnet Symposium hosted by Sumner Hall. 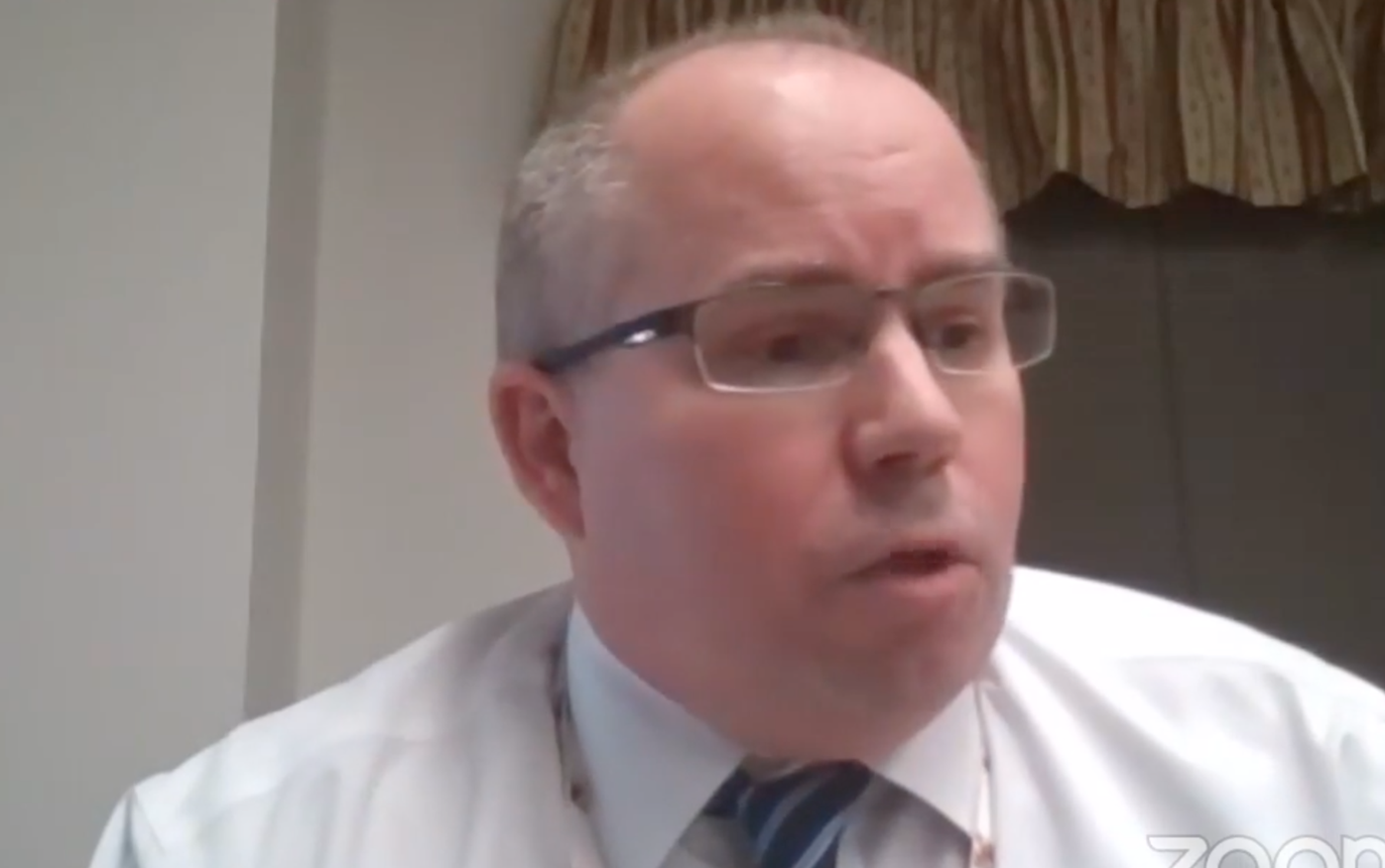 Kent County Health Officer William Webb provides information on the vaccine rollout in the county as well as the disparity among the percentage of the county's African American population that has been vaccinated.

Nkossi Dambita, an epidemiologist and the director of Clinical Services at McFarland & Associates in the African American Health Program in Montgomery County, speaks to the science behind transmission of the novel coronavirus. 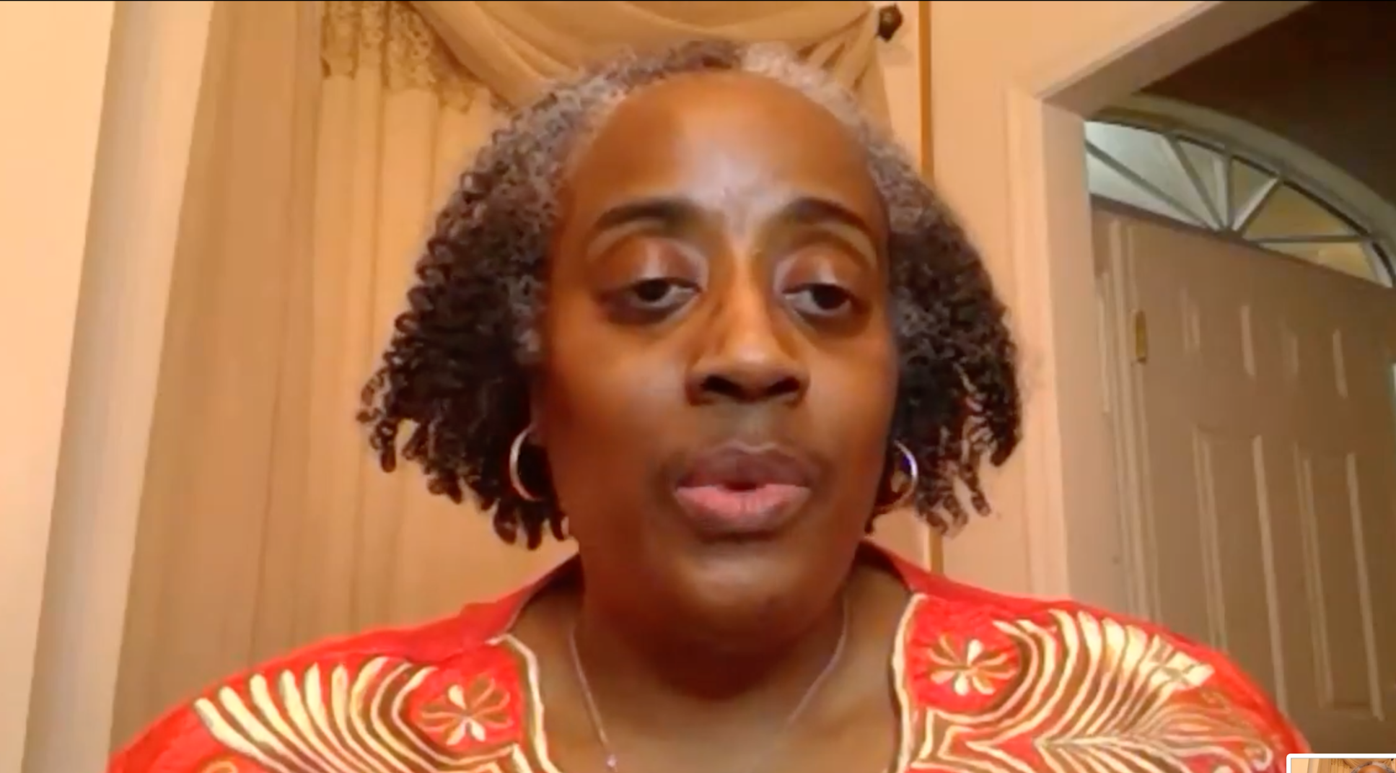 The Rev. Monique Davis, pastor at Mt. Olive Church in Chestertown, speaks to moving from fear to faith and during research to help address vaccine hesitancy. 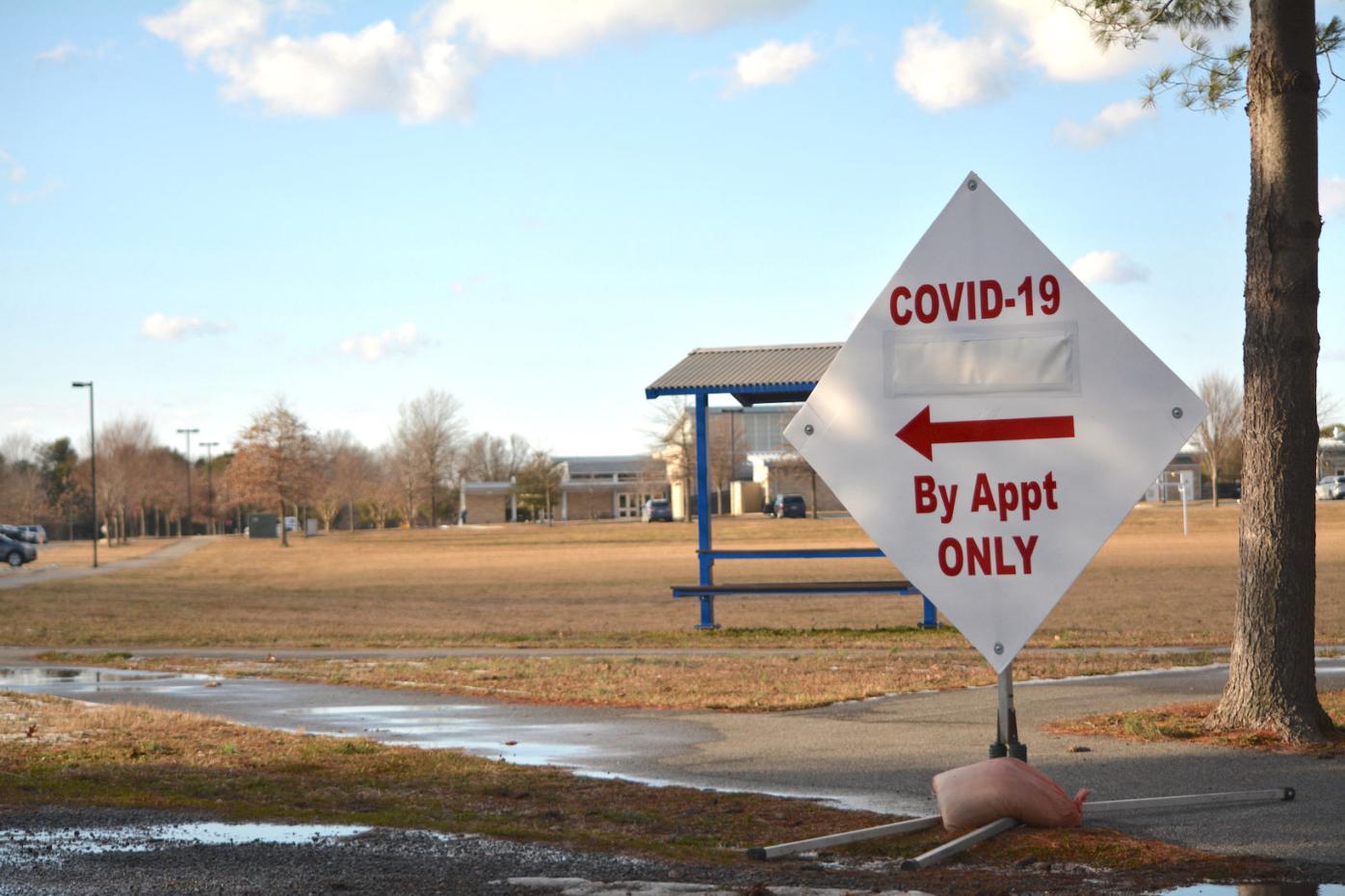 A sign directs those with COVID-19 vaccine appointments to the Kent County Community Center in Worton Tuesday, Feb. 23. A symposium held by Sumner Hall Friday, Feb. 19 sought to address concerns about getting vaccinated.

Ruth Shoge, a professor at the Salus University-Pennsylvania College of Optometry, speaks to the history behind vaccination hesitancy among the African American community during the fourth annual Henry Highland Garnet Symposium hosted by Sumner Hall.

Kent County Health Officer William Webb provides information on the vaccine rollout in the county as well as the disparity among the percentage of the county's African American population that has been vaccinated.

Nkossi Dambita, an epidemiologist and the director of Clinical Services at McFarland & Associates in the African American Health Program in Montgomery County, speaks to the science behind transmission of the novel coronavirus.

The Rev. Monique Davis, pastor at Mt. Olive Church in Chestertown, speaks to moving from fear to faith and during research to help address vaccine hesitancy.

A sign directs those with COVID-19 vaccine appointments to the Kent County Community Center in Worton Tuesday, Feb. 23. A symposium held by Sumner Hall Friday, Feb. 19 sought to address concerns about getting vaccinated.

CHESTERTOWN — Unpacking vaccine hesitancy among the African American community and finding ways to address it cannot be done without first acknowledging the history that created and fostered mistrust.

"When we consider the reasons for vaccine hesitancy in these communities, we have to consider two major reasons," Dr. Ruth Shoge said Friday during Sumner Hall's fourth annual Henry Highland Garnet Symposium. "That is mistrust in medicine and medical providers and mistrust in the government. Both of which have been bedfellows, unfortunately, for much of the history in this country."

The symposium, held via the video conferencing platform Zoom and live-streamed on Sumner Hall's Facebook page, brought together four experts to discuss vaccine hesitancy and answer any questions from those watching. It was moderated by Doncella Wilson, systems of care coordinator for the Kent County Local Management Board.

At the local level, Kent County Health Officer William Webb said there is evident disparity among the Black population that has received the first dose of the COVID-19 vaccine.

"So we have a fairly significant disparity," Webb said. "It is a disparity at this point and the health department is committed to delivering the vaccine equitably, to deliver it to the entire community and to deliver it to anyone who wants to get a vaccine."

To help the understand where the disparity and hesitancy to get the vaccine might be coming from, Shoge — or "Shoge number two" with her mother, also Ruth Shoge, who serves on the board at Sumner Hall as the number one person with that number — spoke to the history of medical mistreatment and abuse of the African American community.

Shoge is a professor at Salus University-Pennsylvania College of Optometry and holds a masters degree in public health from Temple University with a concentration in social and behavioral science.

Shoge said that mistrust is rooted in exploitation of Black people and other minorities groups that occurred "over centuries." She cited examples like medical experimentation and withholding medical treatment that occurred during chattel slavery in America.

Shoge said there was experimentation of smallpox inoculations performed on Black people and the use of deceased enslaved people's bodies for dissection and research without the consent of the family members.

Shoge drew on what is often informally referred to as the "Tuskegee Syphilis Experiment," but said "we should aim to remember it and call it by its full name, which is the 'Tuskegee Study of Untreated Syphilis in the Negro Male.'"

The study, which began 1932 and lasted for 40 years, was conducted by the United States Public Health Service. It began with 600 Black men — 399 of which had syphilis and 201 did not not. The participants were lured into participation, Shoge said, through the promise of free medical exams, free meals and burial insurance.

"The study was conducted without the benefit of the men's informed consent," Shoge said. "Even though they were said to have willingly participated, they didn't know what they were participating in. They were actually told that they were being treated for 'bad blood,' which was a term that was used to describe all kinds of ailments back in those days."

Shoge said the study likely ended as a result of media attention and further investigations.

In another example, Shoge said Black women in particular were targeted for medical experimentation during childbirth in the times of chattel slavery.

"This included having (Cesarean delivery) without anesthesia because there was this perception that Black women didn't feel the same level of pain in which white women did," Shoge said. "Unfortunately, this is a perception that still persists to this day in modern medicine. Unfortunately, I've been the recipient of not receiving pain care in a timely fashion."

Women were targeted for sterilization as young as 12 years old, Shoge said.

She said even as enslaved people gained freedom, medical and social experimentation did not stop but shifted to those other areas where minorities were being oppressed like those imprisoned or those in poverty.

Another example Shoge spoke to was Henrietta Lacks' cervical cancer cells that were used without her consent and without any money given to her or her family to revolutionize the study of cell lines.

"This really propelled research and enriched biotech companies around the world who used her cells to conduct research," Shoge said.

Shoge said there have been strategies instituted to "limit the blatant exploration" of people used in medical research including informed consent — "people have to truly understand why the research is being conducted, what are some of the risk factors and the disclosure of compensation if there is going to be any," she said.

These regulations are in place to protect vulnerable populations like the elderly and children. Shoge said researchers also must attend ongoing ethical training "in order to remember the history."

Shoge said interpreting the Black community's reaction to the current pandemic should also be viewed through the lens of the federal government's slow response time and misinformation. She gave the example of a myth that Black people were not getting infected with COVID-19 because of the melanin in their skin.

The vaccine rollout has also been a cause of concern among the Black community, Shoge said, because of the speed in which it was released.

"A lot of mistrust is kind of wrapped up in what was titled the 'warp speed agenda' of getting the vaccine into production," Shoge said. "People just didn't trust something that folks didn't believe was going to be adequately researched and tested."

Nkossi Dambita, an epidemiologist and the director of Clinical Services at McFarland and Associates in the African American Health Program in Montgomery County, discussed the science of the novel coronavirus.

Dambita spoke to efforts to mitigate its spread like continuing to wear face masks even after you have been fully vaccinated, washing your hands and quarantining if you think you’ve come into contact with it. He said while the vaccine is critical to ending the pandemic, society cannot return to “pre-pandemic behaviors” until enough of the population is vaccinated.

Webb focused primarily on the health department's vaccination efforts, but said there are other places to get vaccinated like Walgreens in Chestertown and Rock Hall, which are offering limited services. For those with transportation, there are vaccination opportunities at the state-run mass vaccination sites on the western shore in Baltimore City and Prince George's County.

To get fully vaccinated, Dambita said the community must receive two doses of the Moderna or Pfizer vaccine.

Webb said the Kent County Health Department is offering the Moderna option and has been administering the vaccine for a little more than two months.

Webb said the biggest issue facing Kent County is the lack of vaccine supply availability and then getting the vaccine out to the community. He said the county receives 300 first doses a week, but people must register for the vaccinate online and travel to the vaccine clinics.

"The problem is with only 300 first doses a week, and of those 300 doses, we have to allocate a certain percentage to specific occupational sectors under the state's vaccination plan, (appointments) are very difficult to get," Webb said. "We post them online and they get scooped up fairly quickly."

Webb said there are volunteers working through the county's Commission on Aging who will help senior register for the vaccination. To receive this assistance, call the health department at 410-778-1350 and identify yourself as someone who needs help registering. A volunteer will then get in touch with you via phone call and register you for the vaccine.

The Rev. Monique Davis, the pastor of Mt. Olive Church in Chestertown, spoke to a faith based perspective on the COVID-19 pandemic. She said she was initially hesitant to get vaccinated.

Davis said she has been able to move "from fear to faith."

"'For God had given us the spirit of fear, but of power and of love and of a sound mind,'" Davis said quoting the Bible. "And so we as a community of believers, we must remember we have power, we have love and we definitely have a sound mind. And in having a sound mind, God has given us common sense."

Davis said it's OK to be hesitant in trusting medical professionals given the history Shoge discussed, but knowledge, understanding and educating yourself about the vaccine and the COVID-19 virus can help reduce fear.

"We must not stay in fear. We cannot stay in fear," Davis said. "When most of those who are suffering and dying from COVID-19 are Black and brown people, and suffering from (COVID-19), that should encourage us all the more not to make decisions out of fear or retreat in fear, but to rise up and allow our faith to take us to a place of understanding."