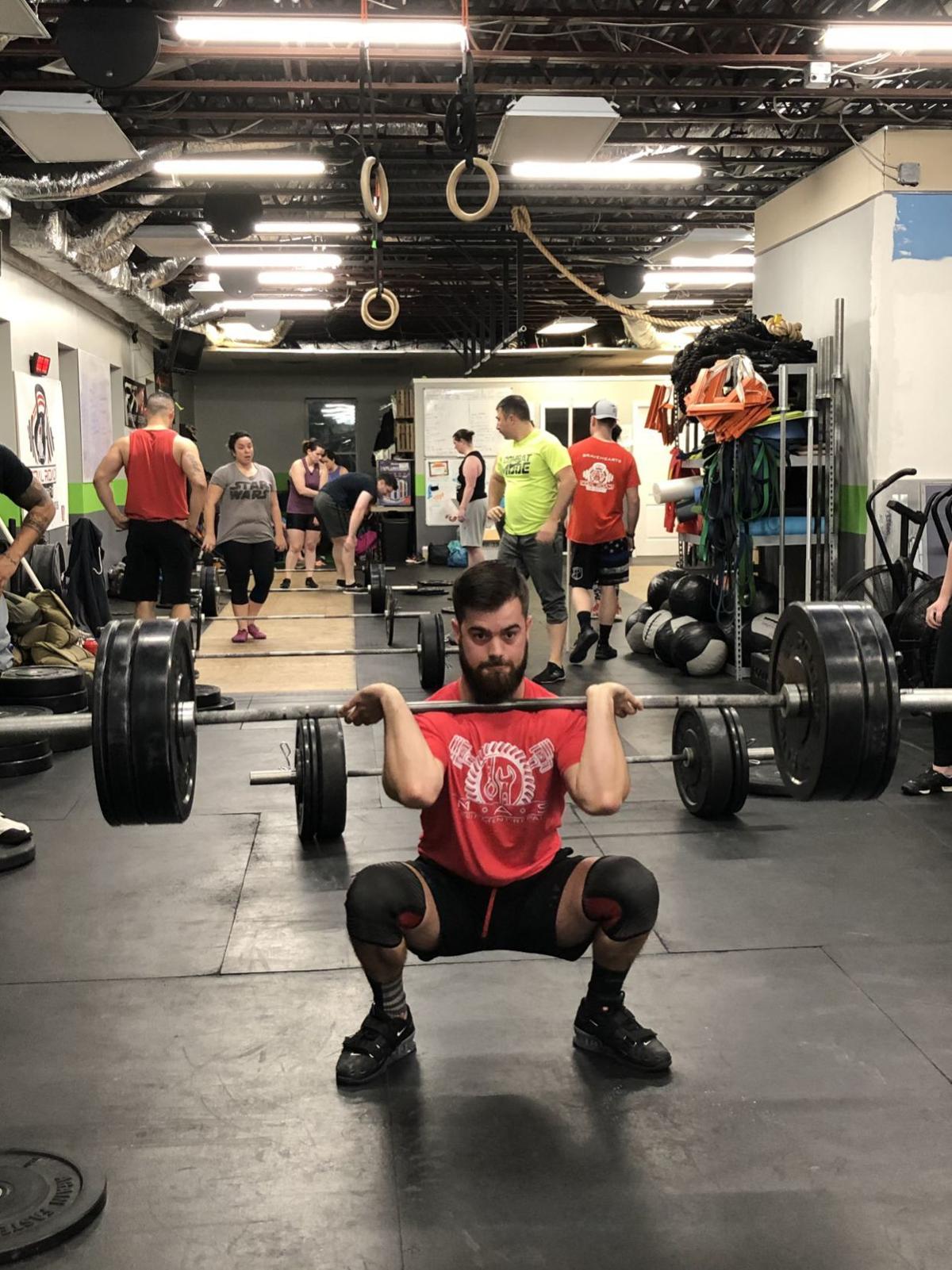 A member squats weights at Coal Road CrossFit in La Plata prior to the doors closing under the governor’s stay-at-home order. 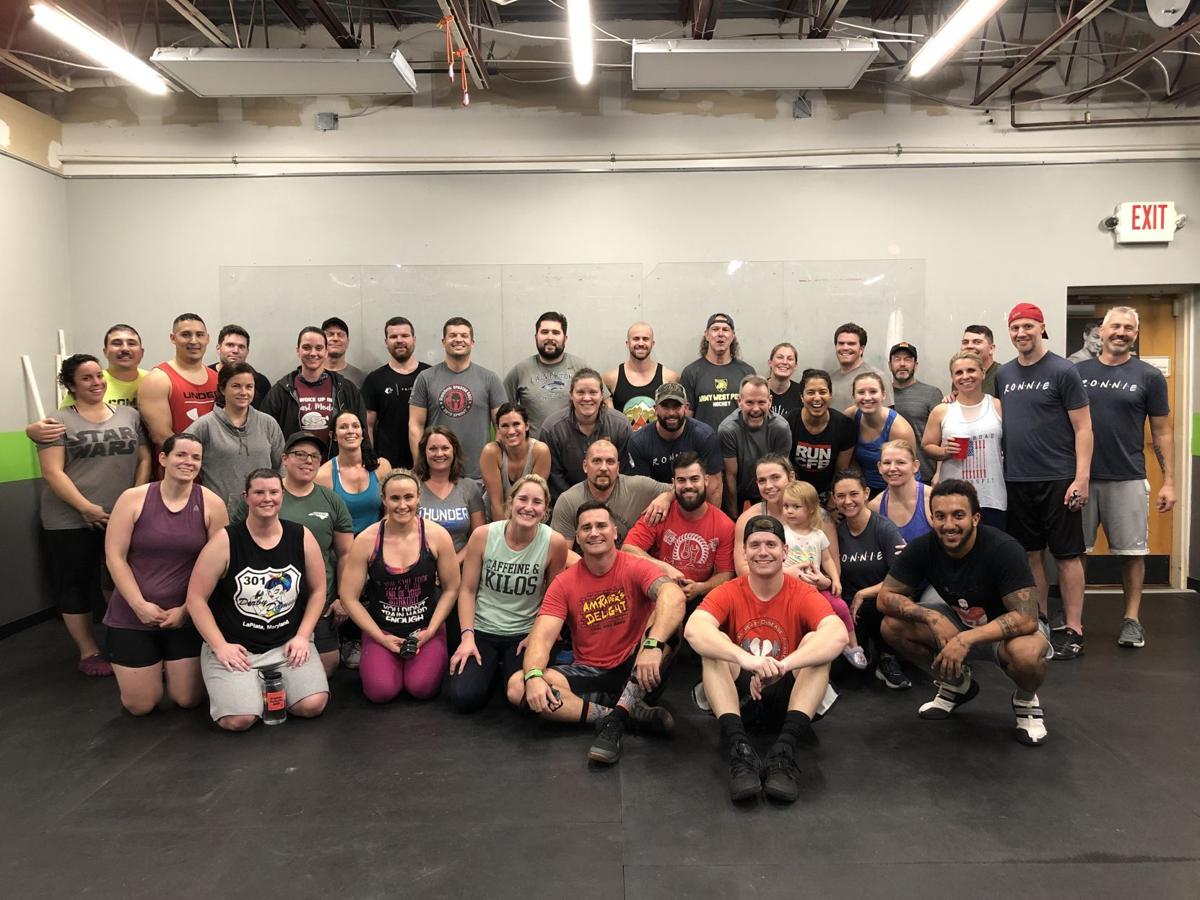 Members of Coal Road Crossfit in La Plata pose for a group picture before the pandemic closure. 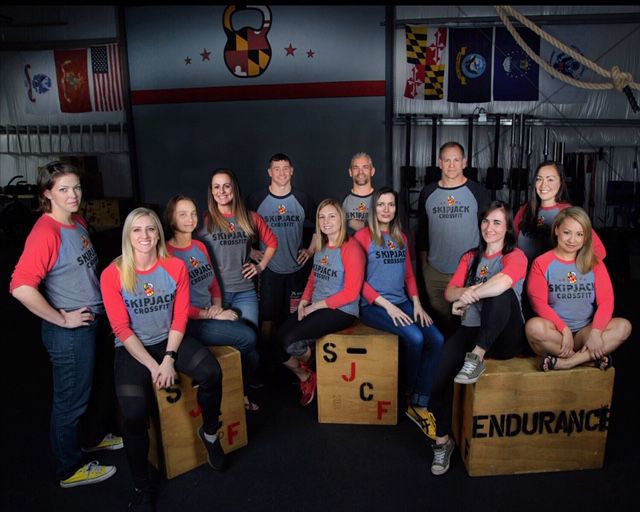 Coaches at Skipjack CrossFit in Owings pose for a photograph inside the facility before the novel coronavirus pandemic changed the workout landscape.

A member squats weights at Coal Road CrossFit in La Plata prior to the doors closing under the governor’s stay-at-home order.

Members of Coal Road Crossfit in La Plata pose for a group picture before the pandemic closure.

Coaches at Skipjack CrossFit in Owings pose for a photograph inside the facility before the novel coronavirus pandemic changed the workout landscape.

Skipjack CrossFit, a gym and training facility in Owings, had its first outdoor social distance exercise session last weekend following the restrictions imposed due to the novel coronavirus pandemic.

After the gym was forced to close its doors amid the governor’s stay-at-home order, the coaches made the transition to an online-based workout program. The exercise programs are held via Facebook for the public and via Zoom for the members of the gym.

Grace Williamson, coach and owner of the gym, said — before the shutdown — the team did a “huge cleaning” in an effort to keep the doors to the facility open to members.

“We cleaned at the beginning of all this,” Williamson said. “Within a day and a half ... we were shut down.”

She told the Maryland Independent that the determined CrossFit members and owners of the gym are continuing their workouts as normal.

“We have had classes that we’ve led on Facebook at noon Monday through Friday on the public page,” Williamson said. “For our members, we had classes via Zoom at 6 p.m.”

She followed by saying the gym owners and coaches are now “operating a little bit differently,” which includes loaning out essential workout equipment.

“We have an equipment library of sorts,” Williamson said. “For our members, we allow them to check out some of the equipment so they can bring home, use and do the workout along with us.”

She explained that the participants of the exercise programs usually know what the routine is the day before it takes place. That way, they can know exactly what equipment they are going to need.

“They know what the workouts are generally the day before,” Williamson said. “Most recently, because of the governor’s orders, we had our first in-person outside class on Saturday.”

“We were social distancing at least six feet apart,” Williamson said about the first outdoor program. “They brought the equipment that we loaned out to them. We didn’t share equipment.”

She said it was a “pretty successful experience,” and that it was sunny outside, setting a happy tone for the experience. “It was a little bit brisk, so we kept them moving pretty fast.”

Williamson told the Maryland Independent that the Zoom workouts have been broadcast from the hosts’ houses; making the experience a bit more casual for the participants. “We have been meeting them from our garage. Anybody can join, you don’t have to be a member.”

She said that the online workouts have been an assembly of old friends, colleagues and random people the owners and coaches don’t know. “We have people we have no idea [who they are] just dropping in. ... Everybody is stuck in kind of the same deal.”

Williamson said that the workouts on the internet are “less technical” because the instructors cannot see the people; they must coach them through it vocally.

“It’s a resource,” Williamson said. “You can’t see people, but you can talk them through some of the basic movements, patterns and substitutions. If they don’t have the exact equipment we have, they may use a paint can.”

Williamson explained to the Maryland Independent that CrossFit is also a social experience, and being apart from everybody is not an easy adjustment for some members.

“One of the things that sets CrossFit apart is the social aspect of CrossFit. ... We are so competitive individually,” Williamson said. “We are supportive of each other to achieve whatever goals we are trying to achieve. [Maintaining social distance] is a tough thing to manage.”

Mai Kneale, owner and coach at the gym, said there have not been any people at the training facility since the order was mandated. “It is mandatory to not have anyone congregate at our facility, unfortunately. ... But we are making it work.”

“The Zoom part of it is great,” Kneale said. “We can provide coaching advice. That probably wouldn’t happen at all if we didn’t use Zoom. The meetings on the internet have been very helpful and successful for us.”

She added that it has been a learning experience for her. “Nobody in the community was prepared for anything like this. ... Nobody knows anything. We just go by what the governor tells us to do.”

She said that reopening the doors to the facility is “going to be hard” because they are going to have to limit the amount of people coming in when it is time. “Everyone is going to want to come back in as soon as possible. We still have to be safe and healthy.”

As for members of the gym, John Williamson, coach and owner of the gym, said most members — although the facility is closed — are showing support by continuing to pay their membership fee.

“Most of our members have continued paying,” he said. “We told them at the very beginning if they wanted to discontinue or stop their membership, they would be allowed to do that. The vast majority continued paying.”

He said that in April and May, the gym gave a 20% deduction in the membership cost, but there are a “handful” of members who continue to pay the full price.

“We are still providing the service online,” Williamson said. However, he added that it is not what they expect or have had in the past, and told the Maryland Independent that there has been a loss in revenue over the past few months.

“We probably lost about 30 to 40 percent of our revenue. People who come into the facility will buy products, whether it’s beverages, protein drinks or T-shirts. We don’t have that same traffic,” Williamson said. “We cut back as many costs as we can.”

Siggy Herrman, owner of Coal Road CrossFit in La Plata, said as of now, all workouts for his gym’s members are held via Zoom with only 10 to 12 people in the virtual sessions.

“Everything is still guided by one of our coaches from start to finish,” Herrman said. “We have given out all of our equipment to our members. We let all of our members come in and sign out equipment free of charge to them.”

He added that there are yoga instructors producing videos that are “a little bit different.” The videos are posted on the members page. “We also have our coaches putting out kettlebell workouts. Those are all done at [members’] leisure.”

He told the Maryland Independent that the biggest difference between virtual and in-person workouts is in the coaching and socialization aspect.

“We are not standing right next to the individual,” he said. “We have a really tight-knit community at Coal Road. Members socialize in and out of the gym quite a bit.”

He added that, although most members can’t socialize in person, they are still getting together over Zoom classes.

Herrman explained that he “absolutely” prefers in-person workouts over internet-based workouts and will be implementing phase one of the state’s reopening soon. “We are going to be running outside classes, using our parking lot for social distancing.”

He said the CrossFit community has “rallied around” the gym and each other during this time. “They have done fundraisers for our gym to keep the gym going. We feel like we are facilitators of this community. Our members have taken off with it and have managed to keep that going.”