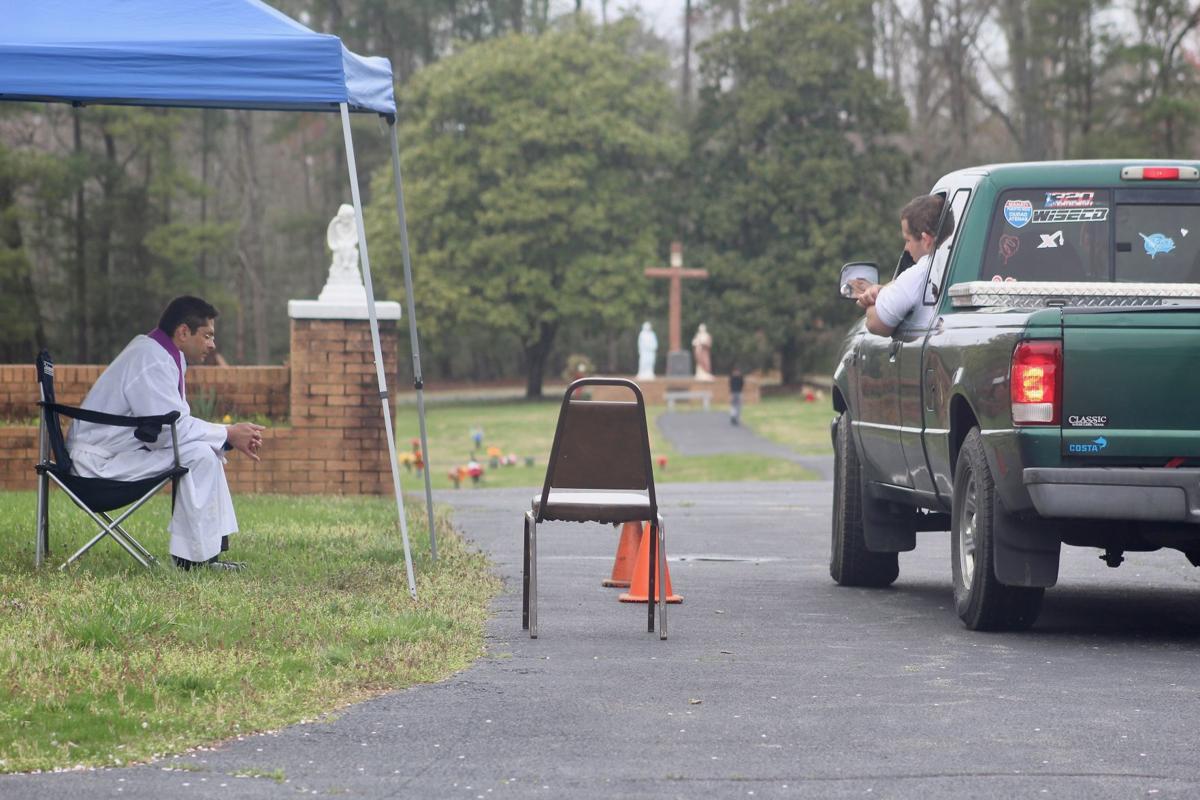 The Rev. José Rodriguez, left, parochial vicar of Immaculate Heart of Mary Church in Lexington Park, listens to confessions at the drive-thru confessional the church had set up to practice social distancing on Saturday. 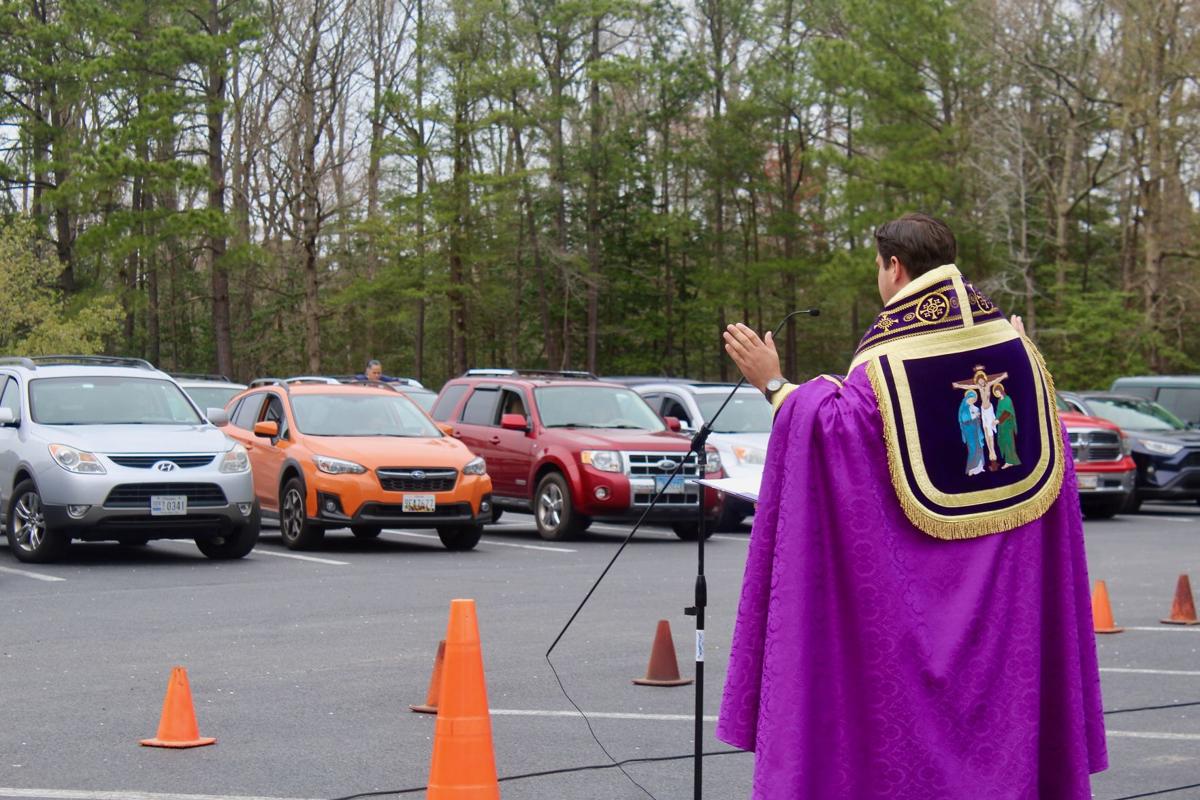 The Rev. Marco Schad, pastor of Immaculate Heart of Mary Church in Lexington Park, conducts a prayer liturgy in place of Mass on Saturday while the congregation stays in their cars to practice social distancing. 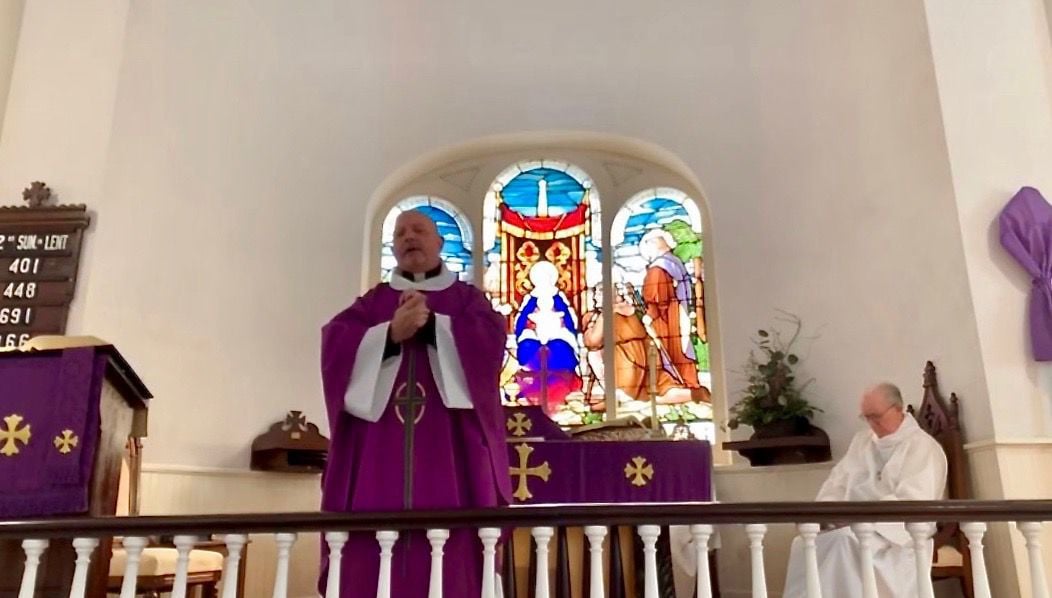 A screenshot of the Rev. Chris Jubinski, pastor of Christ Episcopal Church, during a livestream service in the Chaptico sanctuary.

The Rev. José Rodriguez, left, parochial vicar of Immaculate Heart of Mary Church in Lexington Park, listens to confessions at the drive-thru confessional the church had set up to practice social distancing on Saturday.

The Rev. Marco Schad, pastor of Immaculate Heart of Mary Church in Lexington Park, conducts a prayer liturgy in place of Mass on Saturday while the congregation stays in their cars to practice social distancing.

A screenshot of the Rev. Chris Jubinski, pastor of Christ Episcopal Church, during a livestream service in the Chaptico sanctuary.

The governor has enforced social gathering restrictions since the spread of the new coronavirus, rules that have forced churches in the community to find new ways to worship.

Gov. Larry Hogan (R) has limited the amount of Marylanders who can gather. It went from no more than 250 people to 50 people and then to 10. On Monday morning he imposed a stay-at-home order.

Before this week’s order, members of Immaculate Heart of Mary Catholic Church in Lexington Park held services in the church’s parking lot. The Archdiocese of Washington suspended public Masses and distribution of communion, but the parish held a liturgy of the word the past couple Saturdays with loud speakers and members listening from their cars with the widows down.

“We also offered confessions with a little drive-thru confession we set up,” the Rev. Marco Schad, pastor of the church, said.

Podiums and a piano were at the front and a collection basket was available for anyone who wanted make offerings. Schad said they also have an electronic giving option.

Immaculate Heart of Mary Church has about 1,800 registered members; around 20 cars were present at each of the past five Saturday services.

Church events have been canceled, as well, like its Friday Lent seafood dinners, its biggest fundraiser of the year. Sunday schools have stopped, though some teachers are doing lessons online, and baptisms have been postponed. Schad said they have had two funerals, but each was limited to 10 people, including the priest.

St. Francis Xavier Catholic Church kept its doors open two hours each day for personal visits and prayer time. Jim Howe, a member of the church council, said several other Catholic organizations stream Masses online for members to view from home. The Rev. Chris Jubinkski, pastor of Christ Episcopal Church in Chaptico, said its diocese has canceled services until May 16. Since the cancellations they have streamed services online, which gives Jubinkski a chance to step up his technology game, he said.

They were streaming before but the pastor said it wasn’t edited. The virus has given him the opportunity to learn from other priests. They went from using one camera, to four, for instance.

The Sunday service, midweek service and Stations of the Cross are posted on YouTube every week, and they are working to offer it on Facebook Live and other platforms.

“Truth be told everyone wants to be back in church,” Jubinkski said, adding there is a sense of loss not being able to see one another. But they are adapting to the streaming life.

“Right now its the next best thing versus doing nothing at all,” he said.

The pastor said they used Zoom, a video conferencing site, to conduct meetings and planned to use it for Bible study.

Christ Church had to also cancel events like its St. Patrick’s Day dinner, as well as events the outside community held in its building, like Narcotics Anonymous, Girl Scouts and wedding receptions.

Although he does not like to talk about money, Jubinkski said he had to make gentle reminders offerings through his weekly videos. He said a listener told him he would have forgotten if Jubinkski didn’t say anything. He said people have mailed their checks and a PayPal link is available on the church’s website for members to give online.

The pastor said phone calls are made once or twice a week to check on members.

“Some people are feeling very isolated,” he said.

Jubinkski said there is a group of people ready to pick up groceries or drive folks to doctor’s appointments when needed.

Steve Humphrey, pastor of Mt. Zion United Methodist Church of Laurel Grove, said he is trying to start a YouTube channel for the church. He spent a weekend “messing around with Skype” and was looking into Zoom and Facebook.

“I’m trying to figure out how to do both at the same time,” the 50-year-old said about YouTube and Facebook. He was able to livestream on both platforms but had to use his phone for Facebook and his computer for YouTube.

“Next week, I expect to be on webcams for both of them,” he said.

Humphrey went looking for a webcam in the store a couple weeks ago and said they were sold out, just like toilet paper. He was able to have one sent to him directly from a technology manufacture.

He livestreamed from the sanctuary with a pianist who played and sang during the service. He said the trick for him was to look at the camera instead of looking out at the pews, where he is used to looking during a sermon.

“When you’re used to talking to a group of people … talking to a piece of plastic is kind of challenging,” Humphrey said.

He said most members have checked in through the livestream and he plans to become more creative moving forward.

“The main thing all smaller churches are getting out of this … none of us are up to date on tech as we should be and it’s the perfect excuse to get where we need to be,” he said.